IT'S TIME FOR... ADVENTURE TIME!

Written by Ryan North
Art by Shelli Parline, Braden Lamb and Mike Holmes
Published by kaBOOM! Studios and Titan Comics
Review by Steve J. Ray
Over my time as friendly-neighbourhood reviewer for the liberators of frequencies I have always been given books that suited my taste.
Star Wars – The Force Unleashed
Because I love Star Wars
Classwar Vol. 1
Because I love independent comics too, not just DC and Marvel
Batman – Hushed Unwrapped
I am a self-confessed Batman Uberfan.
And so on...
This time, however I got a little surprise handed to me in the form of Vol. 1 of Adventure-Time. The first thing I said to my wise and illustrious editor was “What the hell is this?” To which he replied, “You’ve never seen Adventure-Time? GREAT!”
Right now many of you may well be asking yourself what rock I’ve been living under. Yes, I like cartoons; yes I am a parent and YES that orange dog DOES look familiar. I have not, however ever seen an episode because the show always looked a little childish, immature and silly. 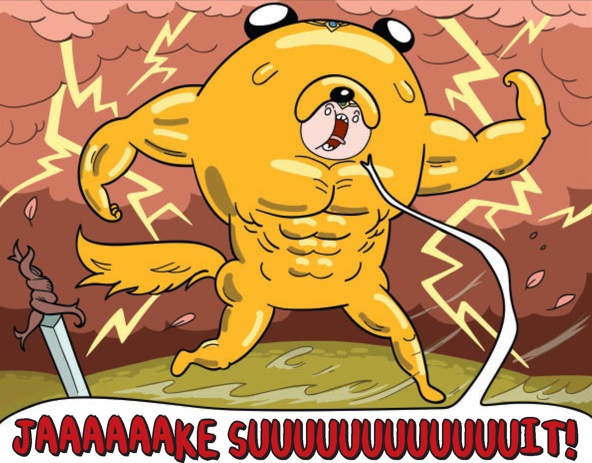 My son is now 17 and a writer / reviewer for this selfsame web-site in his own right. When we watch cartoons or animation it’s usually to see Young Justice or Transformers Prime or some much more – ahem – “Mature” action adventure series.
Hey... An assignment’s an assignment though, right? And my job is to review so I took the book home and read it.
It is childish, immature, silly... and more than a little bit brilliant.
Firstly it is designed for those uninitiated infidels – like me – who have never seen the show. I do suspect, though, that it will hold even greater value for existing fans. The book introduced me to Finn, the Last Human in this (I would later discover) post-apocalyptic world. Jake, the shape changing previously mentioned orange dog, whose countenance had already been following me on countless T-Shirts for the last couple of years, I also met Princess Bubblegum, the Ice-King, the evilly villainous Lich (He’s gross; I’m telling you he’s GROSS!) and all the other characters who call the land of Ooo home.
Finn and Jake exude awesomeness in their camaraderie, love of adventure and just plain energy. Princess Bubblegum is just as her name would suggest, as well as being a hyper-intelligent badass!  Even the (semi evil) Ice-King is more than just little loveable and – I think – misunderstood. BMO the living game-boy is sooo cool and I want him to teach me the sacred and mystical martial-art of Battle Burns. The villain known as the Lich is just downright EVIL. (He’s gross; I’m telling you he’s GROSS!)

In just two chapters you feel like you know the characters, understand them and – most importantly – root for them. Their quest is honourable, their resolution well thought out and the adventure both thrilling and hilarious. By the end of chapter 4 I really and truly wanted more.
The author’s footnotes at the bottom of the pages are informative, educational and just downright hilarious. I wish, though, they’d been printed in black. Sometimes I missed some and found myself actually turning pages back to read any that I’d not initially noticed due to them being far too easy to miss in the awful, barely visible light green type that saw print. Naughty!
The art I believed to be simple was perfect for the story and in places held some unexpected delights. (All the lovely detail found in the remaining strata of the earth that the evil Lich had mercilessly dumped into his bottomless bag amongst others. He’s gross; I’m telling you he’s gross.)
Yep, you’ve guessed it... I have seen the light. I am now a fully-fledged fist bumping, princess saving, evil villain hating (He’s gross, I’m telling you he’s GROSS), battle burning, JAAAAAAKE SUUUUUUUUUUUUIT wanting Adventure-Time fan.
So, yeah! Give the book a try and don’t miss out on the TV series because of how it looks either. It’s actually just as good as the comic... Or should that be the other way around?
Now I must be away to search through TV listings, as I do believe that it is time.
It is time, you ask? What time?
Adventure Time!