Showing posts from July, 2018
Show All

Review: The Brave And The Bold #6

“The Brave and The Bold” – Part 6 Writer: Liam Sharp Artists: Liam Sharp & Romulo Fajardo Jr Review by Adam Ray Our escape with Batman and Wonder Woman to the realm of  Tir Na Nog  has reached the epic  conclusion we all wanted. We see the full power of the ancient evil lurking at the heart of this world. The return of an ancient king to combat this great evil shows the wonder and danger of this land, and both are here to stay. The mini-series has all been leading up to this. I know a lot more about Celtic Myths than you would expect, and Mister Sharp knows more still. The looming presence of Balor, the demon at the edge of this realm has been the threat everyone in this world, and ours, should rightly fear. It’d take all the powers of a warrior princess from yet another world, just to hold him back. Brave Art Sharp and Fajardo Jr have knocked it out of several parks on several worlds in this final chapter of The Brave and The Bold. Th
Post a Comment
Read more

Review: Red Hood And The Outlaws #24

"Dead Wrong" Writer: Scott Lobdell Artist: Dexter Soy, Allison Borges, Veronica Gandini Review by Adam Ray A team lead by Jason Todd could do great or terrible things for the world. You would hope for a positive result from Jason, someone trained by Batman and brought back from the dead. Not so. In the last few issues, Jason’s been on a small side quest, looking into his own family past, and the circumstances around the death of his father, Willis Todd. Long before Jason’s appearance in  Batman  #357 way back in 1983, his father, Willis, was sent to prison covering up crimes committed by The Penguin. Jason lived on the streets until Batman found and Adamtrained him. As a man back from the dead, Jason is reconciling that part of his past and it comes to a head in this issue. Ruffled Feathers I don’t think it’s possible for Gotham to have a working seaside carnival without some kind of drama attacking it the moment it opens. A
Post a Comment
Read more

“Copycats” – Part 1 Writer: Joëlle Jones Artists: Joëlle Jones, Laura Allred Review by Adam Ray Batman   #50  left readers startled (thanks for nothing, New York Times). Enter Selina Kyle’s solo jaunt, to somewhere south of the border. She’s living off Mahjong gambling and is the subject of a copycat as we find her in this issue, miles away from the roof of Kane Plaza. Catwoman’s motivations for leaving are sad but justified. Batman is the dark protector of Gotham City. Being in love means having another person to care for and another thing to possibly pull his focus away from being the protector that the people need. Copycat Killer Kyle is taking a good deal of time to herself. As a reader, I like how you can’t quite tell how long it has actually been since  Batman  #50 and now. We can give ourselves distance in our minds to get over the surprise twist (thanks for nothing, New York Times). This means the world is our oyster with all the
Post a Comment
Read more

Review: The Brave And The Bold #5

“The Brave and The Bold” – Part 5 Writer: Liam Sharp Artists: Liam Sharp & Romulo Fajardo Jr Review by Adam Ray We left Batman and Wonder Woman in the  last issue  at the mercy of angry locals and distraught, hideous creatures known as Fomorians. This issue of  The Brave and the Bold  builds on that tense situation. Everything comes to a head as we find out what happened to an artefact of ancient power, we see a dark presence re-emerge, and, on top of all that, the wider plan is finally revealed. Writer Liam Sharp has been able to pack a lot of tension into a single issue very well. The hyper-detailed yet storybook quality of the art is locked in across the whole title. It’s a lovely thing to behold. Many comics follow the highs stakes, cinematic style to mirror their movie counterparts, so seeing cliffs and sympathetic faces behind beards and tusks is a real breath of fresh air. Rift Between Worlds You can easily split this issue into two
Post a Comment
Read more 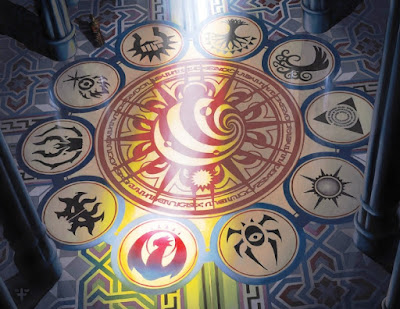 Article by Adam Ray I make it no secret, readers, that I love two games more than the air I breathe. Dungeons and Dragons, and Magic: the Gathering. Despite being made by the same publishing company, Wizards of the Coast, they've made almost no crossed streams. Until now. The talk of Wizards wanting to publish a new setting for their supplemental campaigns left many wondering where we can go. This is no mere Plane Shift - like those of Zendikar or Kaladesh, leaving us with races and statistics, and prompts on where to go. This is a full, world guide. And it's RAVNICA! Next to nothing is known about this supplement. It appeared on Brazilian Amazon then later on an American version of the site. The product description features very accurate portrait of the Acumenopolis in the heart of every Magic player. All we can do is speculate. As an avid player of both games, I have exceedingly high expectations for this supplement. It needs to deliver new rac
Post a Comment
Read more 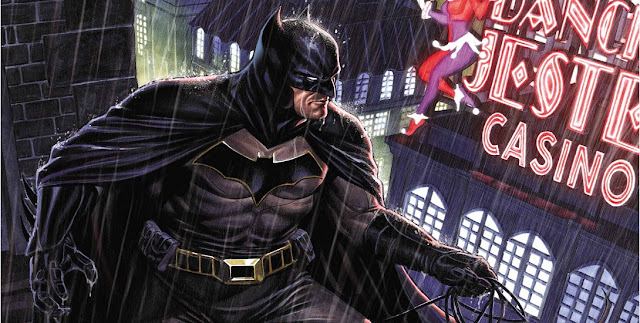 “On The Outside” – Part Two Writer: Bryan Hill Artists: Miguel Mendonça, Diana Egea & Adriano Lucas Review by Steve J. Ray Who is Karma? What is the secret behind his relationship with Batman? How are the two connected, and how will this all affect Duke Thomas, Cassandra Cain, and Jefferson Pierce? The action is loud, and emotions are tense in the second chapter of “On the outside.” In  Detective Comics  #983  Batman recruited Black Lightning to help train Orphan and The Signal. As soon as the Dark Knight’s former Outsiders colleague agreed, Cassandra Cain found herself under attack by this new villain. Writer Bryan Hill has pulled off the neat trick of following the theme of Batman growing his crime-fighting network, as laid out by predecessor James Tynion IV, whilst turning the whole idea on its head. We’ve also been given a brand new antagonist in Karma. This villain is a palpable threat; you can sense a real connection with Batman, which includes a heady mix of bo
Post a Comment
Read more
More posts