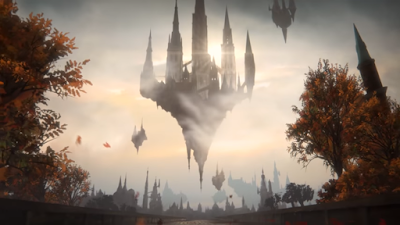 We're going home. A Re-Return to Ravnica. Izzet, Selesnya, Golgari, Boros, and Dimir are going to fill a void that the incredibly powerful Kaladesh, and deeply diverse Amonkhet will bring to Standard. The realm known for defining the colour pairs will put new legends on the Commander tables. 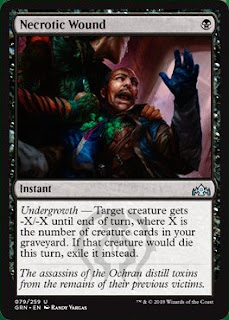 Our first example of the Undergrowth Mechanic. From the Golgari (Green/Black), Undergrowth checks how many creature cards are in your graveyard as it resolves. Exiling all graveyards with a Sentinel Totem with this on the stack will feel pretty bad. Rumours of a Sultai Muldrotha deck with extra Surveil cards and Explore cards would turn the dead into extra value. In that deck, this premium removal. Talks about trying to play this in Modern Traverse Shadow or even post-board in Dredge isn't unreasonable. 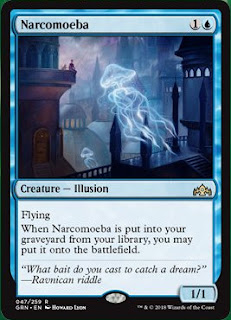 Speaking of Dredge, everyone's favourite illusory jellyfish is back. At rare because no one reasonably wants to deal with a 0 mana 1/1 flying in Limited. Dredge players will love to see Narcomoeba back and easy to get a hold of. This slots right into the upcoming Sultai Muldrotha deck. Flip it over with Azcanta, or an Explore Creature, or a Surveil effect and here it is. Heck, Stitcher's Supplier, one of the best milkshakes going is in Standard and that gets you a jellyfish. 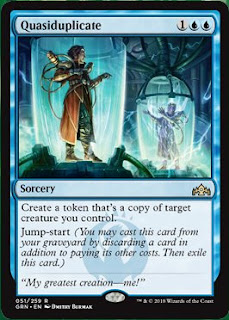 Let the experiments begin! Our first example of the Izzet's Jump-Start mechanic gives the Instants and Sorceries of the Blue/Red Spellslinger guild a new lease of life out the graveyard. The mechanic itself very much reads like a baby of Flashback and Retrace: you have to discard a card to cast it again, just like Retrace; but you only cast it once, just like Flashback. It's still inherently powerful, so lets see if Wizards makes the mistake of printing a Jump-Start Past in Flames, or a Jump-Through-Flames, if you will. As for this card itself, taking away Instant speed and swapping Jump-Start for a 7- mana Flashback cost makes this a little better than Cackling Counterpart. 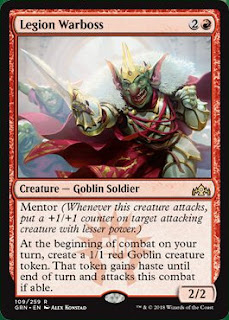 No this is not Rabblemaster. He's pretty close. Making a friend, attacking it in, and likely giving it a counter is very powerful in upcoming Boros aggro decks, but more importantly, Goblin decks. In future Standard, I rate this as a stronger 3-drop than Chainwhirler. That deck, which is what Mono-Red becomes when rotation kills the deck outright, wants a reliable way to make bodies every turn whilst being aggressive. Warboss here does that. As for the Mentor mechanic, the flavour behind an experienced warrior bolstering someone younger is really shown well, and maintains the flavour of Red/White Aggro by only doing it on attacks. I sense there's a lot of space to be explored here. 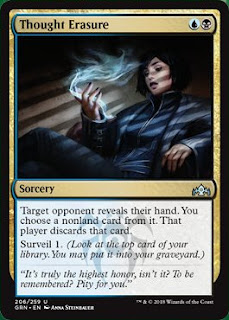 I have a lot of words. With the strength of the other Surveil card they posted (which I cover next), and the big bad card right at the end, a mean looking Blue/Black or Grixis Control deck. This is main-deckable discard with upside in those decks, akin to Transgress the Mind from Standard past. Tacking Surveil - what the cool kids are calling Scry but better makes this very powerful and sought after for Blue/Black Control. Hence why it's getting the FNM Promo treatment. 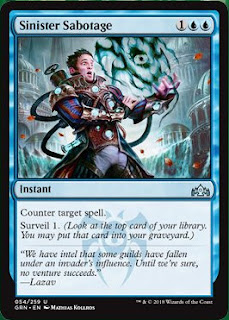 In it's day, Dissolve saw a lot play. It's unquestionable that this is better. Surveil X is accidentally the most busted card-flow mechanic Wizards has put out there. By having an undesirable card go to the graveyard instead of the bottom of your deck like with Scry effects, you aren't condemning yourself to never seeing the card again. It affords itself to reanimator strategies and the relevant card becomes live with any manner of recursion. In this set alone, there's value to milling over your cards. If you hit a creature, you make all your Golgari Undergrowth cards stronger, and if not, you can cast that spell with Jump-Start later. As for this spell itself, putting good card selection on a counterspell makes it both playable and dangerous to play against. It's good in Sultai Muldrotha, and it's good in the growingly scary Grixis Control (because putting 2 cards in the grave for 1 card seems good if you want to flip Azcanta). 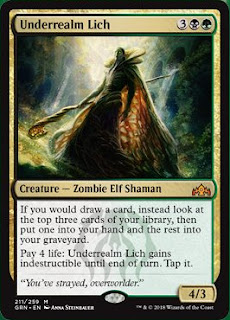 Now here is the engine card that the Sultai Muldrotha deck is craving, given that we're losing Papa Roach to rotation. Being able to Strategic Planning any time you draw a card will fill up your graveyard very quickly. All the while this 4/3, often indestructible beater will get that midgame damage in. 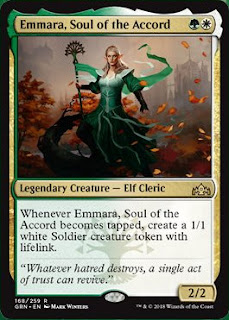 Immediately a more playable Commander than her past iteration. Emmara helps widen the board for Convoke in Standard by Convok-ing in Standard. As a Commander she'll crew Vehicles, escalate Collective Effort, help an Elf or Cleric open Cryptic Gateway, give something the Glare of Subdual, activate lands like Holdout Settlement or Survivor's Encampment. I could go on. As for Standard, she'll be a welcome two-drop in Green/White tokens alongside Shanna. 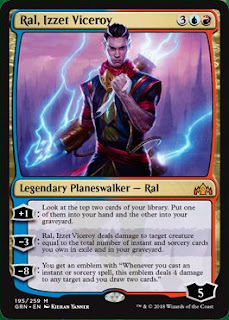 MY GUY! Looking at all the spoilers so far, there wasn't a compelling reason to splash Red in what looks to be a very powerful Blue/Black Control deck for just Bolas and maybe Lightning Strike. Ral Zarek is the reason. As a late game, control Planeswalker, I'd say he is very strong. 5 mana for 5 loyalty already meets the bare minimum, but pushes him out of playability for Blue/Red Wizards in Standard. Card selection (and more graveyard value) on his Plus is a step towards greatness. His -3 is damage to a creature, very reminiscent of his earlier printing - it checking how many cards you have in Exile means he can do a lot of damage, including cards you Jump-Started, and cards you played Flashback in other formats. The emblem reminds me of the ultimate of a lovely lady making waves in Titanshift and Mardu Pyro. Sure Chandra being able to zod things for 5 feels better, particularly with Lyra looking to come back without Unlicensed Disintegration ruining her breakfast, but zapping for 4 and drawing two for each counter or kill spell not only marries together Blue and Red, but would end a game through damage or card advantage very very quickly.

The sudden treat of all these Ravnica cards is very very welcome. The sky is as high as the spires of the city itself, which makes me wonder what the spires look like on this Re-Return to Ravnica? How well Landed are we? Survey says shockingly well. Keep up with Fantastic Universes for more spoiler content, until then: live free, play well.