We are less than two weeks away from Prerelease for Guilds of Ravnica which makes spoiler season officially open. 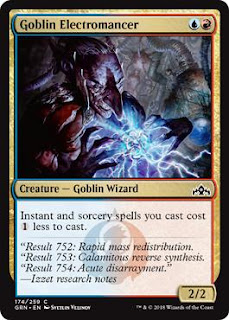 Admittedly, my homeboy, Gobbo here has been printed six times. Though he's returning to Standard with what looks like an upcoming Blue/Red or Grixis spells deck. If Gobbo is good enough to fuel Modern spells decks, he'll be powerful in a Standard without Fatal Push. 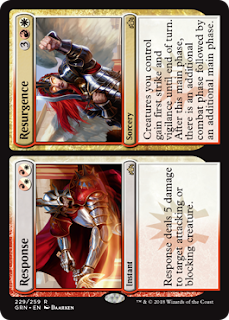 The first of a few Split cards, which also nicely show off Hybrid mana returning to Standard. With Split cards, you only cast one half or the other from your hand. Perhaps Ravnica Allegiance or the unnamed 3rd Ravnica set will bring back the Fuse keyword, that lets a player cast both halves. The Response half is a strong Red/White removal effect, already strictly better than Gideon's Reproach, which sees some sideboard play in Control decks. The Resurgence half is another show to hush detractors that Wizards is unwilling to print extra combat effects. They very easily disproved this by printing Lightning Runner and Combat Celebrant in back to back sets. 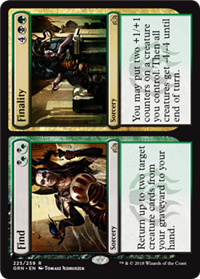 The rare Golgari Split card has a nice internal design based on when you cast multiples. The Finality half is a Languish that hopefully saves one of your own creatures, while the Find half recurs things lost to the Finality half of a first cast. 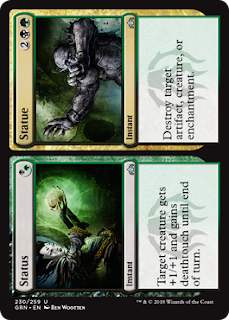 The Uncommon Split card, is arguably more interesting and playable than the rare. Seen on the first day of initial spoilers as our tease for Split cards and hybrid mana. Both halves are worth considering. The Status, a powerful combat trick, turns Standard Allstar Goblin Chainwhirler into a board-wipe. The more noteworthy half, that doesn't sound like total magical-christmas-land is the Statue half. Instant speed removal for 3 different permanent types is very powerful, and might share a split slot at 4 with Vraska's Contempt. Many Standard players felt that their Artifacts were safer without Abrade in the format, but this is probably more welcome removal in the upcoming Sultai Muldrotha deck. 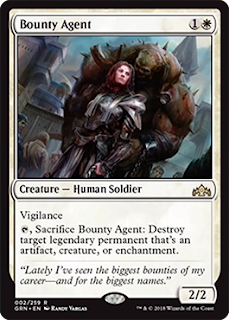 A lot about this card seems interesting. 2/2 for 2 with Vigilance is already above average for Limited. To be able to destroy a Legendary permanent for a very small cost is very strong. I've heard contention for this to see play in various builds of Death and Taxes. The real place of power for this card is in Commander. To be able to kill a Commander is valuable, but to easily recur it with Karador, Alesha, or even just Sun Titan makes it playable in lots of decks. 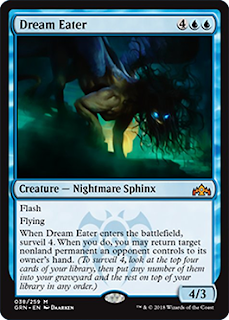 I have strongly mixed feelings about creepy Sphinx here. It's undeniably powerful. Flash, 4 power flying, that digs a lot of cards, and is a Disperse is a huge tempo swing for the control deck playing this as a top end. I'm just hoping 3 toughness doesn't lock it out of Standard play, meeting many Lightning Strikes with it's ETB on the stack. I guess I'm spoiled and sad on the loss of Torrential Gearhulk from the format. Then again, him being an Artifact made him quite vulnerable. Maybe creepy Sphinx is worth watching? 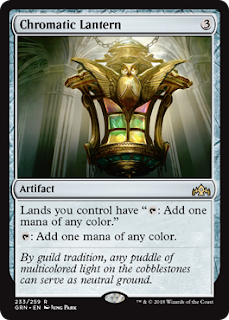 Commander players rejoice! The pricey staple for many three or more colour decks is coming in a Standard set. It's price will be low, while heavily opened and seeing very little Standard play, it is a reprint the format deserves. Well done, Wizards. 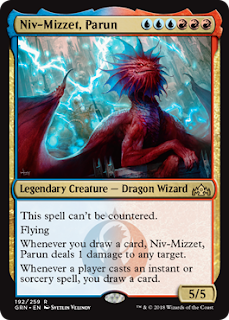 The firemind, the parun of the Izzet guild! Looking at his design, they've added together the best parts of the previous printings of Niv-Mizzet. The power/toughness of Dracogenius with the draw trigger of Firemind. New features like can't be countered and symmetrical card draw on Instants and Sorceries make him feel like a 1 mana less Rescue Whale. I feel that he could be a top end of the Blue/Red Control deck, as a mirror breaker against Control, and he'll do very well at the Commander tables, drawing a lot of cards. It's a shame he and the Locust God won't be in the same Standard. 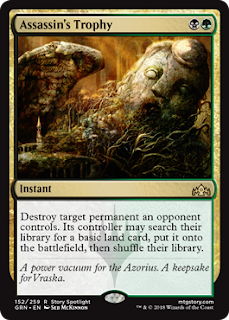 What the hell is this? This one of the singularly most powerful, one-for-one removal spells I've seen since Fatal Push. To be able to destroy any permanent, Lands included, for 2 at Instant speed has shaken up many removal packages in many formats. This is as much a staple in Green/Black/X Commander decks as Windgrace's Judgment. That's the easy part. In Standard, this is a removal spell that'll see play, but as a 2 of. It's not for the early game. Standard decks run a lot of basic lands, and played early will ramp your opponent, which isn't desirable. In Modern, this is probably better than Abrupt Decay simply from how wide it can cast the net. It may yet give Modern Jund the lease of life the deck needed with the speeding up of the format. Very very strong.

Day one started out very well. Keep up with Fantastic Universes for more previews and thoughts on the best cards shown over the day.
Adam B Ray Adam B. ray Adam Ray Adam's Dragon Cave Magic Magic: The Gathering Wizards of the Coast