Guilds of Ravnica spoilers are going on, and as always, here are my thought out opinions on the ones that might be strong enough for some kind of constructed. Let's go! 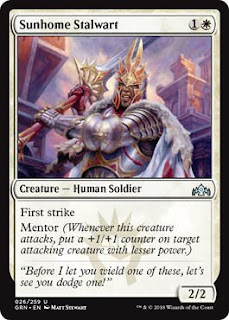 Although this soldier isn't exactly too fancy, and lacks the 'knight' creature type, I feel that the best aggressive deck post rotation will either be Blue/Red Wizards or Mono-White. Mono-White's ability to go wide and strengthened with Benalish Marshal. The deck may be in need of two-drops and one that puts counters on the Legion's Landing tokens. 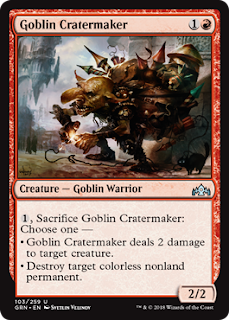 Kapow. This is another Goblin that I think can make it into the upcoming Jund Gob-Ristocrats deck I feel is looming. Skirk Prospector, Goblin Trashmaster, Siege-Gang Commander, Dark-Dweller Oracle. All Goblins which sacrifice other Goblins for value. If a colourless drain effect, or the mana fixing afforded by Chromatic Lantern allows this deck to play Poison-Tip Archer, we may be sending many Goblins to untimely deaths for power in new Standard. 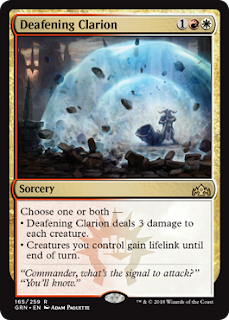 Let me play you the song of my people. Modal spells always afford themselves to play in lots of different decks. This card fits into two very different decks based on the use of the Red and White modes.The 3 to each creature is an early, good sweeper. Sweltering Suns showed up in time to make Blue/Red Control a force at Pro Tour Amonkhet. The other half is a solid team pump like the middle half of Tenacity. The trouble is, no deck can use both modes effectively; a Boros aggro deck wouldn't sweep unless they're losing to tokens. Interesting. 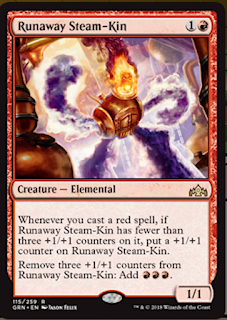 Well this card is funny. I feel like this strange strange card can be the engine of a burn deck, or even a pseudo-Storm deck? By casting multiple burn or goblin spells, then get more mana to cast more spells. It's interesting, but I don't know what will happen to it. You'd need to be casting as many spells as you're getting mana which won't last very long in Standard. 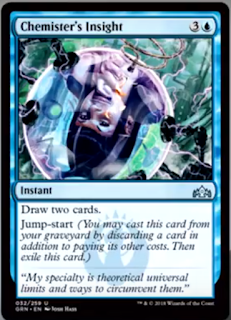 Just when Standard Control was scrabbling for playable card-draw, Vince, also known as PleasantKenobi on the Internet showed us his preview card. With both Glimmer of Genius and Hieroglyphic Illumination leaving the format, this will fill that role very well. A strictly better Inspiration, the ability to cast it twice a game, and ditch a dead card on the second go makes this a very important piece in future control decks. 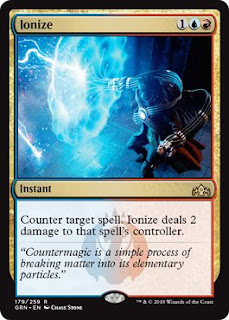 Looking at this card, I had the reaction of of a chef randomly kissing their fingertips, tasting something delicious. This is delicious. If there was any doubt of Blue/Red, Grixis, or even Jeskai Control with Settle, Cleansing Nova, and now Deafening Clarion as sweepers, look no further than literal counterburn. Brave new Standard incoming. 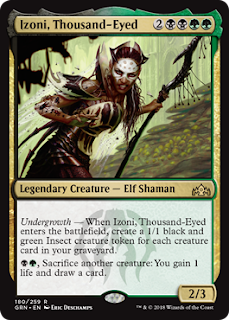 The Mana Source's official spoiler card is a truly unique Commander. It can spell out a lot of power for 6 mana. Its on board, repeatable sacrifice outlet is the perfect way to trigger your aristocrats in her own deck as well as Meren, Sidisi, or Karador. 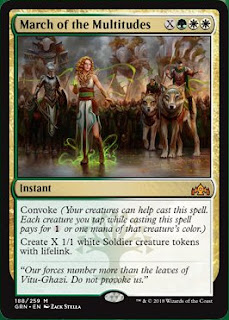 Though this does cost two more coloured mana and an additional colour than Secure the Wastes, this is better than Secure the Wastes in a dedicated token strategy in every way. Instant speed means your army in a box will always have haste. Giving them all Lifelink makes them more relevant than mere 1/1s. Convoke means you're more than doubling the number of creatures on board. Be afraid of a Trostani, Rhys, or Emmara player holding this up.

All the cards of today have me excited and we're still very fresh into the spoiler season. Find more here on Fantastic Universes.
Adam B Ray Adam B. ray Adam Ray Adam's Dragon Cave Magic Magic: The Gathering Wizards of the Coast