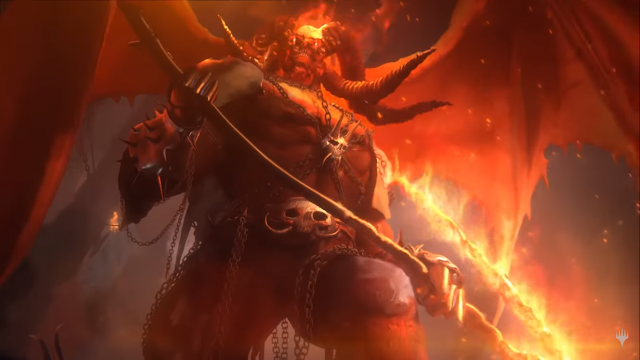 Welcome back citizens to the greatest and largest cityscape in the known worlds. With the next set coming in the first few weeks of 2019, Wizards is treating us to the first week of spoilers in style. The Rakdos mechanic has been revealed, and we've seen all the promotional cards and where you'll find them. Let's begin! 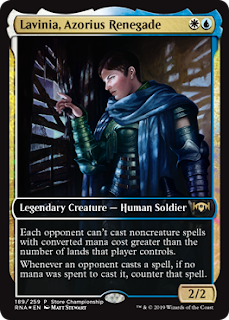 My god she's strong. The Store Championship Lavinia shows her breaking away from the Azorius Senate and living outside the law in some shady safe house. She's joined the pantheon of Gaddock Teeg and Thalia as one of the strongest hate-bears out there. Her playability in Modern knows no bounds. She's welcome in all manner of control shells to hose Tron or any manner of combo decks that cheat enormous effects out for little mana. Turn 3 Karn on the play seems rather unlikely with her on curve. 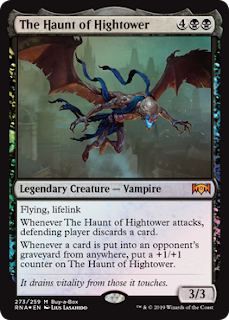 Hightower is a place in the Tenth District of Ravnica. It's a gathering of libraries, school, bookhouses, and places of learning, all dominated by high towers. I was keen to take my Dungeons and Dragons party there, but not that I know that this legendary vampire lives there. The unique, not-in-packs, Buy a Box Promo returns with an interesting depiction of parasitic Black. It grows stronger from cards moving from zone to zone, and has two relevant keywords. Its cost makes it far too steep for the consideration of Standard or Modern, but it has relevance in Commander decks like Lazav, Phenax, and of course, Edgar Markov. 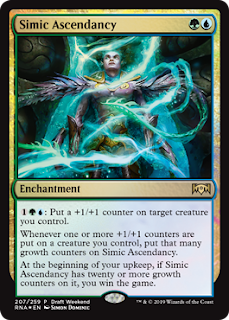 A welcome addition to the "enchantment named after a faction, then the word ascendancy" cycle. The consistent counter engine, alongside the inevitable strong Simic Counters theme makes this card at least worth considering in Atraxa or Vorel Maga. It may be fun to pair with Hadana's Climb, but may yet be a little slow for Standard though, and vulnerable to one of the FNM promos (keep reading). What I want to know is where is my Watermark? Either way, my own Atraxa deck will hunt for one of these during Draft Weekend. 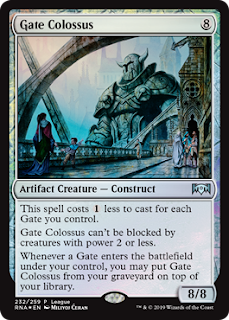 For those that play In Store League, you're treated to the most interesting build around for Allegiance Standard. The rainbow gates deck, with Guild Summit at it's core was primarily suiting up a Gatekeeper Gargoyle with a Glaive and looping Chamber Sentry. This is another, very welcome threat to that deck. It's large, hard to block, easy to recur, and cheap to cast. It reminds me of Metalwork Colossus from the improvise decks of old. Very welcome in the Gates deck indeed. 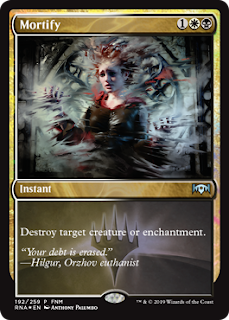 You cannot beat a classic. This FNM promo shows a reprint that should slot right into Esper Control decks and Orzhov decks of future Standard. This beautiful printing will also be much sought after for Black/White decks across many Commander pods. 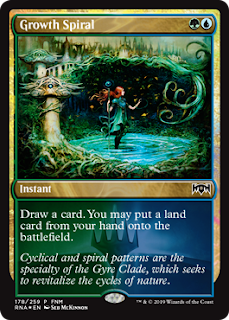 Everything about this FNM Promo is beautiful. The atmospheric Seb McKinnon artwork, that conveys the cyclic nature of the universe in a somber way. It even looks like the Simic tree. The function of the card is deeply exciting. An instant speed Explore will be welcome in so many places. At its floor, it'll flow cards in Simic decks in Commander. At its best, Tatyova got a great deal more playable in a Standard Lands deck. This may also push Titan Shift decks back into Temur colours in Modern. 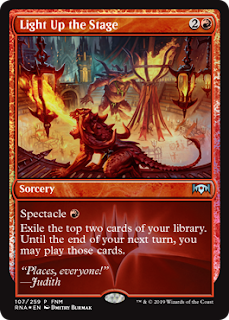 Step into the big top, we have one of the best Red, one shot, card-flow spells printed since Abbot or Act on Impulse. Three mana for two cards is decent; the closest Red can get to Divination. One mana for two cards is godly advantage that'd be welcome in more midrangey Red decks that are leveraging Karn, Frenzy, and Treasure Map in Standard. How does one create a spectacle? In the most Rakdos way possible. 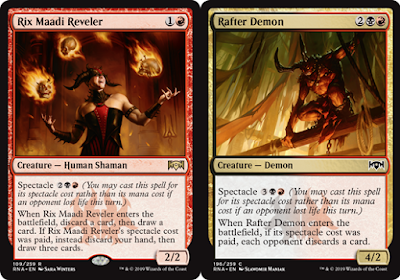 The new Rakdos mechanic, joining Hellbent and Unleash, is Spectacle. Cards have two casting costs, their regular and their Spectacle cost. If an opponent lost life this turn, pay the (likely more steep) Spectacle cost for an added effect. The flavour harks back to the Rakdos as demented performers, rather than demonic cultists. The spectacle comes if your opponent had life to spare, in payment for the show. A very key distinction. It also is reminiscent to Pain Casting - a mechanic they were developing in Return to Ravnica, where spells got better/cheaper based on how much life your opponent lost that turn, still present on Rakdos himself. We have yet to see more of the mechanic, but advantageous effects in an aggressive deck will put burn and whirling chains as headline acts in a Rakdos deck.

These two Spectacle cards in isolation now. Rafter Demon is a very medium card for draft. A 4/2 for four will make some Rakdos/Jund/Mardu Limited decks, but in the late game a five mana 4/2 which forces your opponent to discard one of their last few cards may be quite relevant. The Mono Black Discard deck with Raider's Wake and Fell Specter are already filling up low power MtG Arena Leagues, and they may want Red for this boi.

Rix Maadi Reveler has a lot of promise. I remember a time in Magic when Red never got 2/2's for two. A Red bear with upside? Party on. Seriously, in the late game in an aggressive Rakdos deck, this kind of card flow is a godsend to decks like this. It requires more work than Flame of Keld, but is immediate card draw in the late game, unlike Flame; which also sees more cards and can't be Invoked or Brontodon-ed. This Reveler might fit well alongside another Reveler in certain Modern decks, or a Hollow One in others. 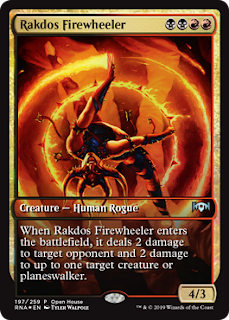 Now this is welcome continuation of the four mana, two of each colour, uncommons like Crackling Drake and Conclave Cavalier. If you pick up this alternate art foil at your Open House, you'll be dealing four mana for four damage and enabling Spectacle with a relevant body on board.

The spoiler season has begun, for the next few days, they'll unveil a Guild and their mechanics as the week leads to Friday Night Magic. You'll find full commentary on all cards shown as the weeks lead into the full set reveal. Until then, feast your eyes on the next load of Guild Basics, during the next Ravnica Weekend and included in the next round of Guild Kits. Blue domed buildings of Azorius courthouses, high spires of Orzhov churches, chained Rakdos dens, overgrown Gruul wilderness, and hazy Simic laboratories will ensure these Basics as unique pieces sought after by collectors. 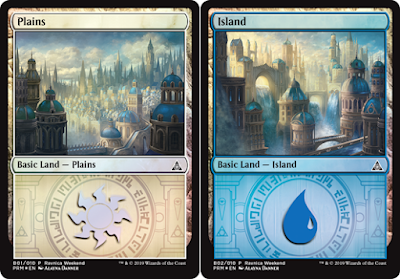 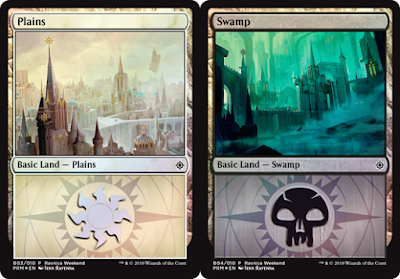 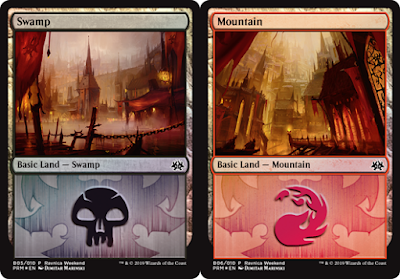 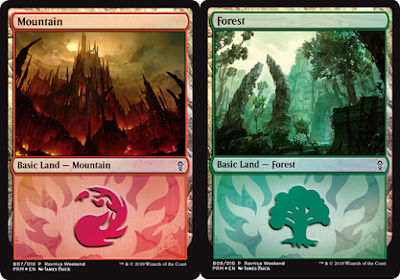 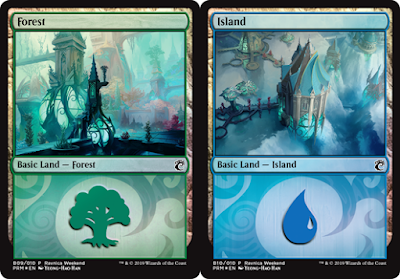