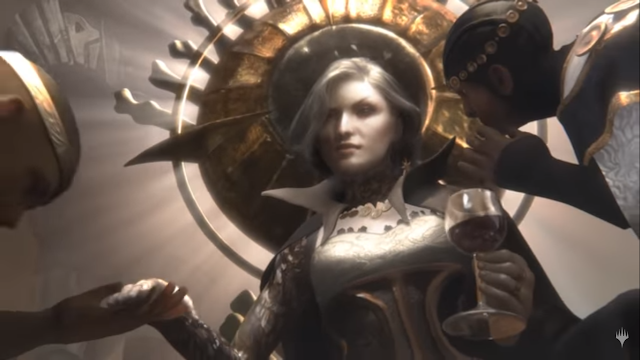 "If you're in debt, then everything you own is on lease."

A very Orzhov attitude from the lyrics of Blue Scholars. We've seen details from the Black/White Guild, and apparently, under their eyes; everyone is a Doomed Traveler. Let's see how it goes in day two of Ravnica Allegiance spoilers.

The Orzhov mechanic has been revealed. We caught glimpses of Afterlife yesterday, only to be confirmed today. 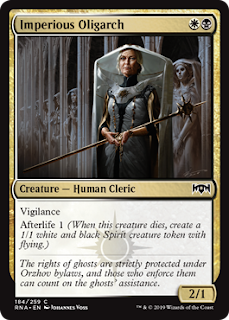 Afterlife means that you'll never lose board presence. The creature will always leave an evasive body behind. Lingering Souls and Doomed Traveler were powerful because the life beyond the graveyard and evasiveness of the tokens ensure there's always a threat on board. We can also expect higher Afterlife numbers, creatures that spit out 2 or even 3 tokens on death. 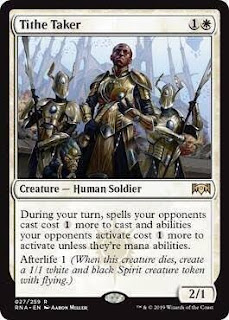 Now this is a strong and interesting card. As a hoser for Instant speed interaction that maintains your board presence when it dies, it's already looking at a strong sideboard slot in Standard for Teferi decks against Teferi decks, making Azcanta cost 4 to spin. As for Modern, it's very strongly considered in Taxes decks alongside Cat Jesus and Mindcensor, or even in Humans sideboards.

Another strong but scant showing from Ravnica. Return to Fantastic Universes soon for more spoilers and talks about another Guild mechanics.
Adam B Ray Adam B. ray Adam Ray Adam's Dragon Cave Magic Magic: The Gathering Ravnica Wizards of the Coast