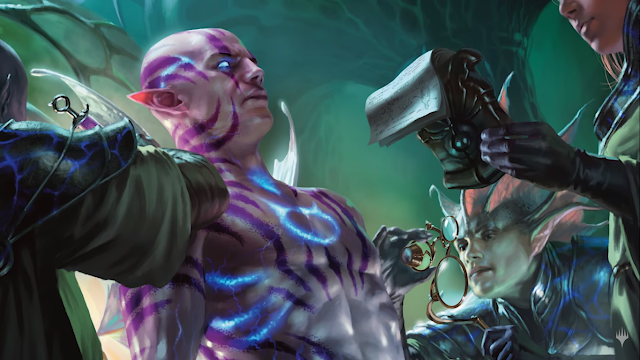 It seems so far in this first week of spoiler season, that we won't get the bevvy of cards until after Christmas. Right now, we're being taken on tour of the various guilds. Today, with a little surprise on top, we were shown the Simic Combine. A walk by the Breeding Pools have shown us just how adaptable the pet projects of the Simic truly are. 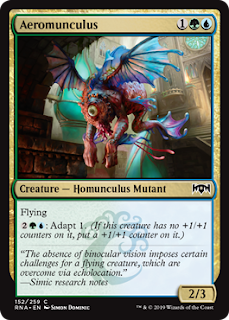 The Adapt keyword is a quick way for a creature to give itself +1/+1 counters at Instant speed. It gains that many, at that cost, only if it doesn't have any counters on it. This seems to be a great mechanic for the upcoming Limited. A late game Mana Sink that upgrades your creatures is deeply valuable. In terms of Constructed play, there needs to be a considerable way to benefit removing counters from creatures (like with effects akin to Zameck Guildmage or Shapers of Nature). 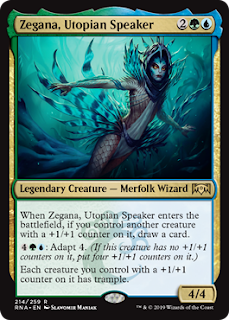 This new version of Zegana looks to show what high end Adapt cards can do. Providing blanket trample like Tuskguard Captain or Crowned Ceratok is valuable in dedicated counter decks, but being able to get counters much more easily, and draw a card on entry makes her desirable over those cards very decisively.

Switching away from the Simic for just a hot sec, we have seen a few cards here and there. 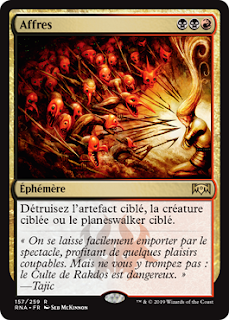 Rough translation for those who don't speak French.

So this is strong, and made it into my commentary, and with stunning but disturbing Seb McKinnon artwork to boot. We just came from a Standard rotation where Abrade was one of the strongest and most representative, benchmark cards. Admittedly Black Black Red is incredibly colour intensive, ensuring it won't be in the same number of decks as Abrade was, but with the combinations finishing up, Grixis Control with a stronger Black quotient for Nicol Bolas and Doom Whisperer looks very menacing going into new Standard.

Things are starting to come together. Just when we thought Simic were getting their day, the Rakdos had to crash the party. We'll get a reveal of another Guild tomorrow and Friday, until then, keep up to date with everything here on Fantastic Universes.
Adam B Ray Adam B. ray Adam Ray Adam's Dragon Cave Magic Magic: The Gathering Ravnica Wizards of the Coast