The Guildpact will see you now: A Review of 'Guildmaster's Guide to Ravnica' 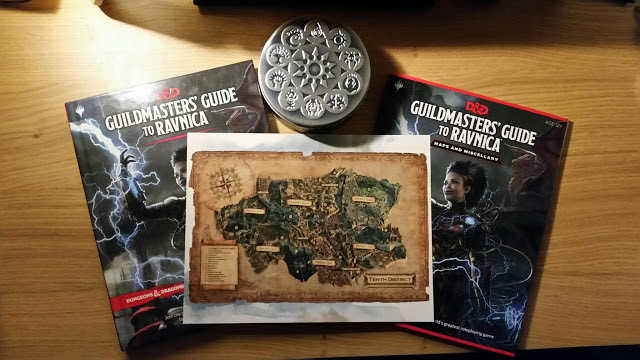 After maybe two weeks of delayed shipping and receiving, I finally got my hands on the official crossing of my two favourite games.This product promised to be a world sourcebook. Everything a player needs to make a character from one of the ten Guilds of Ravnica. Everything a Dungeon Master needs to run anything as short as a One-Shot or as long as a Campaign in Ravnica. By definition, they delivered. Oh yes.

The book itself explains the world in a very loose capacity. Anyone picking it up likely knows Ravnica from Magic the Gathering. The details that never made it into the cards, that's what's emphasised. I made an effort to look at every card from a Ravnica block for inspiration. Never did I know that Ravnica had consistent Newspapers.

The book brings new races in the form of Vedalken, Loxodon, Centaurs, Minotaurs, and Mutants. Most of these are new to 5th Edition and even Dungeons and Dragons as a whole. The new Cantrip Encode Thoughts is flavourful and Dimir incarnate, and very powerful if fully utilised properly.

Sadly, that's where the new content somewhat ends, which is my biggest gripe with it. The Book contains a reprint of the Goblin race from Volo's Guide to Monsters, and recommends the Player's Handbook for Humans and Elves. All of that is well and good, as a common race like Goblins should be in the book, in case one doesn't own Volo's. The book constantly refers to the Viashino, a repitllian race found in the Red aligned Guilds. The suggestion was that the Lizardfolk race stats be used if needed. Why weren't they included in the book alongside Goblins, as both appeared in Volo's. It doesn't stop there. The other "new spell" Chaos Bolt is truly a marvel of Izzet flavour memes. One of my favourite things imaginable. This isn't a new spell. It appeared in several installments of Unearthed Arcana, then the excellent Xanathar's Guide to Everything. The two new Subclasses, Domain Order and Circle of Spores are both flavourful (even if the Circle is under-powered by comparison). The Unearthed Arcana where those Subclasses appeared are lacking the Brute and School of Invention archetype weren't fixed despite their flavour and very clear resonance with Ravnica. As for the world itself, if you aren't a major Vorthos, lore nut for Ravnica, a Dungeon Master might be at a loss if the adventure or the adventurers are drawn outside the 10th District.

Such things do confuse and annoy, but those would have been just welcome cherries on a very full cake.

As you can see, I couldn't say no to the product tie-ins.

The Maps and Miscellany is exactly thus. The maps include The Entire 10th District including smaller maps of each Precinct. All printed on laminated paper suitable for dry wipe pens. The reverse contains details needed without flipping to that part of the book. This makes it useful but tricky to use the map at the same time as the player without making (larger) copies. They also include plain and annotated maps of the sample dungeons and all the associated text from the book. These 100% need to be larger if they're to be used with miniatures for a battle. It also includes a set of cards that detail exactly what the Guild Charms do, accompanied by beautiful character art of the relevant guild members.

The Dice set is an absolute treasure. In a sturdy tin decorated with the guild symbols, a mural of towers and spires, topped with the seal of the guildpact. Inside it has the usual suspects for Dungeons and Dragons, along with a few extra d6's (as has become the trend with the licensed dice sets). The crown jewel is the jumbo sized d10, each with a face of a guild symbol. Unique and treasured by Magic players already. Ideal for an indecisive Commander player to decide which deck to play, or for a Dungeon Master to have a quick draw NPC.

I maintain, as a creative person, that it is impossible to satisfy all members of a fan base. In this instance, Guildmaster's Guide to Ravnica came as close as one could expect. The new content was saddening in its absence. The possibilities with the myriad of monsters, detailed description of a rich setting beloved by many. If ever you wanted to be on the ground floor of a new world in Dungeons and Dragons, this is the way.

You can find audio versions on youtube of the first game I ran in this setting, and further repeat broadcasts advertised right here on Fantastic Universes.
Adam B Ray Adam Ray Adam's Dragon Cave D&D DnD Dungeons & Dragons Dungeons and Dragons Magic Magic: The Gathering Wizards of the Coast