Gather your Æmber: Review and Introduction for KeyForge 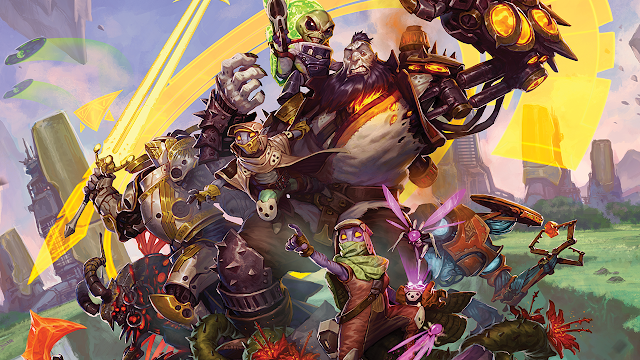 So we've all heard of this phenomenon by now. Richard Garfield, the game designer behind my personal favourite, came out with a new offering in November 2018. Published by Fantasy Flight Games, this unique take on the card game took the world by STORM. I myself have held back on writing anything about this gaming experience until I had a play through with all 7 houses (more on that in a bit). I can safely say that I love it for many quirky reasons.

The format of this game is completely unique compared to other collectible or trading card games. Neither of those things apply. The first expansion, Call of the Archons has 370 cards in it. You buy decks of 36 cards, built randomly, in a box, behind the counter of your friendly local game store. The back of the cards are unique, the name of the deck is uniquely generated and printed on the front and the back of each card in that deck. There's no trading, no deckbuilding. Each deck is unique and cannot be changed. Mathematically, there are up to 104 septillion different possible deck combinations.

Taking away net-decking, and taking away the chase for cards makes each deck personal and something sought after. I have a friend who is desperately seeking any deck in the combination of Logos/Mars/Sanctum. This uniqueness really strips away a competitive side, as people are seeking intensely powerful decks, opposed to singular cards.

Throughout the game, you gather æmber, which you use to forge keys. Most of these keys are made as the first step of your turn if you have 6 æmber to do so. Gameplay goes back and forth between two players, playing out cards from their hand that gain them æmber and interfere with your opponent's ability to gain æmber. 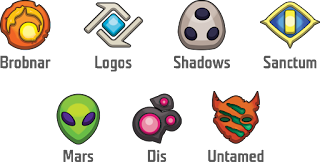 The game is set on a distant planet called The Crucible. Seven factions, or Houses, gather together with you players, into your decks. They'll go forth during a game, to gather æmber and forge your keys. Each of the seven houses has their own unique play style, and strengths.

Brobnar is the House of giants and ogres. Their creatures are the biggest and enjoy fighting. Their other cards deal damage and destroy your opponent's æmber.

Dis is the House of demons. Your hand will be stripped away, your æmber will be taken captive, your artifacts will be borrowed then destroyed. Nasty.

Logos is the House of robots. If you play lots of Blue in Magic, you'll love Logos. They draw many extra cards, have true card advantage actions. They've mastered zapping sciences and can deal damage here and there.

Mars is the House of the little green aliens from 60's B-movies. They swarm more than any other House, aiding each other with the power of the invading force, joined together. Very good at beaming up multiple cards and dealing damage with the force of the alien horde.

Sanctum is the House of holy knights and priests. They heal their own and disable the others, demand tithes from the opponent, and protect each other with armored paladins.

Shadows is the House of thieves and tricksters. Their elves are elusive and steal æmber with precision and speed. They shiv creatures in the dead of night and have hidden stashes of treasure to use when their last job is over.

Untamed is the House of primal creatures. They can gather æmber faster than any other house. With powerful witches that commune with creatures entering on either side, the house maintains peace by sending creatures through the woods and bouncing artifacts back to hand.

Each deck comes in a combination of 3 Houses. They're all balanced, and have interesting little synergies. No deck has the absurd combos that a constructed deck of another card game would have - but there are some interactions between Houses that work well. Logos is everyone's friend, as Phase Shift brings round some friends. Shadows, Dis, and Sanctum all love to steal æmber, while Brobnar and Untamed are very good at getting in the Red Zone with high power creatures and a hatred for artifacts.

I've managed to get many games in online and a few games against the same few people in paper. I own six decks and they all play very differently. In that time, I've learned a few tricks.

Going first? Try to play an Artifact or a card that gets you some card advantage like Sound the Horns or Hidden Stash. As a Magic player, I'm used to the concept of card advantage. In Magic, the player who sees the most cards is probably likely to win. This is true for KeyForge in a way. Because you always end your turn with a full grip, it's not exactly about playing the most efficient card possible per situation. It's about moving through your deck by playing as many cards as possible, letting yourself draw into more cards later. Cards like Phase Shift and Witch of the Wilds are excellent examples. Playing cards off-house let you play things you'd otherwise never be able to, which is a very powerful effect in a game with the strictness of the House mechanic.

Any card that has you purge a lot of your own cards is probably a late-game card. If you played One Last Job or Martians Make Bad Allies early, it's likely you'll get a chance to play it again, and you'd run out of creatures to purge. A little awkward while your opponent keeps cooking.

The sweet spot for a turn is to have cards in play to use, while also playing cards out of your hand. Farming your board-state is satisfying, but eventually the creatures will get removed and if you haven't been adding and diversifying the board, you will probably fall behind. 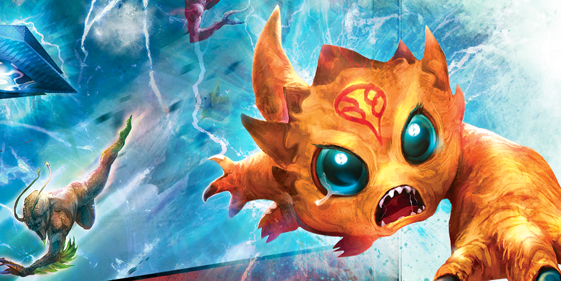 So what do you guys think? Been loving KeyForge so far? I have. In the coming weeks, I'll be posting lists and techs on the decks I've opened, with accompanying videos on YouTube of me playing them on The Crucible. Message me on Twitter if you fancy a game, and thanks for reading.
Adam B Ray Adam B. ray Adam Ray Adam's Dragon Cave Aember Brobnar Dis KeyForge KeyForge: Call of the Archons Keys Logos Mars Sanctum Shadows Untamed