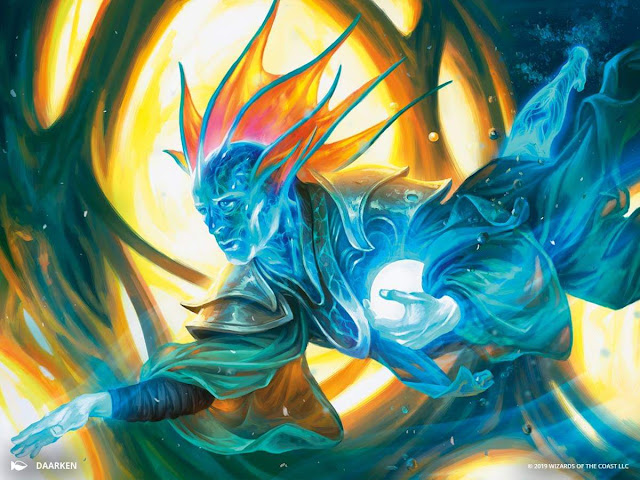 Today looks to be the end of individual spoilers before the full set reveal around 4pm GMT on Friday. We've seen a Mill cornerstone, the last of the split cards, the last of the 4 mana uncommon value creatures, and more. 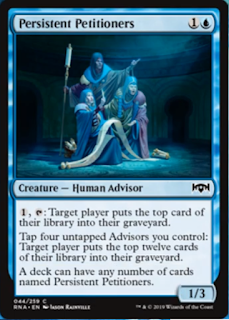 Well this is just funny. This marks the 4th "a deck can have any number..." guy. The first outside of Black. This first real payoff for Advisor Tribal, and it being a Mill engine, makes total flavour sense (as you can feel your brain being milled down as they drone on). It'll make waves in Arena Pauper, possibly even regular Pauper, and many Mill or Advisor Tribal Commander decks. 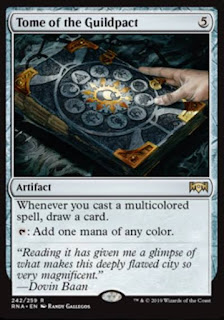 An excellent Commander mana rock. A 5 mana rock is there to fix colours more than ramp into bigger plays. It's clear this is meant to be in a 3+ colour deck, as you'd be able to draw so many cards from this trigger. 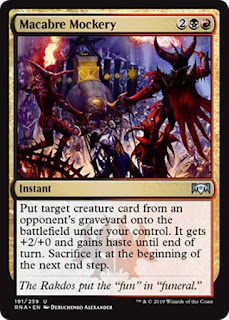 I know that this is a Limited Combat trick, and a strong one at that. It's good to make a flash blocker from an opponent's graveyard, or main phase it to trigger Dovin's Acuity (if you were so bold to play 4c in Limited). I'm only talking about it as the flavour text is unreasonably funny for an uncommon. Put the fun in funeral. 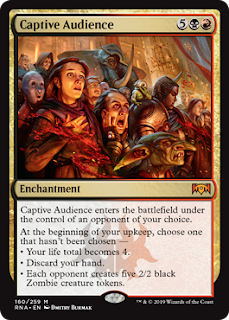 Now this is an interesting Rakdos card. It enters under an opponent's control, so the recipient has to let it hit before trying to kill it. At a Commander table, while this is on the stack, it's a hell of a negotiation tool. It's punishing and reminiscent of Demonic Pact, but it doesn't go so far as being an instant loss. The options are all bad for you, the controller, but it becomes blank after 3 spins of the table when the show's over. It's a flavour win. Slower, controlling Commander decks like Xantcha or certain Scorpion God builds may consider it. 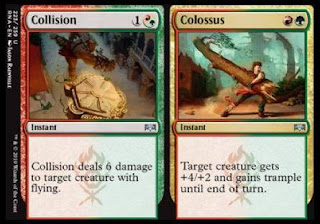 The last of the split cards has a great deal of play to it. Collision swats Niv-Mizzet, Doom Whisperer, Nicol Bolas, and Lyra out of the sky. Colossus is very strongly stated pump spell for it's cost. The Collision half is more valuable out of Gruul Monsters sideboards, but getting Colossus as a cheeky win on a big swing is very viable. 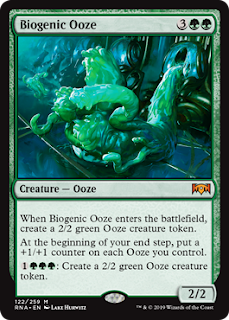 Ooze lord. Schlep. In all seriousness, a body that makes tokens and buffs tokens of a type is always worth considering for Standard play alongside Tendershoot Dryad. Sure Ooze isn't as supported in Standard as Saprolings are. It will make it into various tokens decks. I find it quite funny that it buffs the head of the Simic, the Elf Ooze Vannifar. 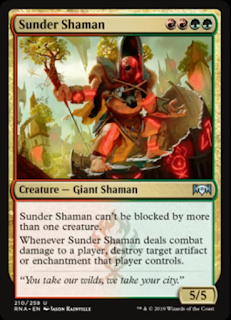 The last of the XXYY Uncommon creatures looks to be one of the most playable by comparison. A 4 mana 5/5 that can't be multi-blocked is quite strong. Being able to bust Artifacts and Enchantments like Trigon Predator is added gravy. This may be welcome in some Gruul builds depending on whether people still love Thrashing Brontodon despite his very Lava Coil-able toughness.

I'm sure this marks the end of Ravnica Allegiance spoiler season. Tomorrow the full set will be unveiled as Loading Ready Run begin their PrePrerelease on their twitch stream. Thanks for keeping up with the spoilers on Fantastic Universes, and check the set's tokens on your way to Ravnica. 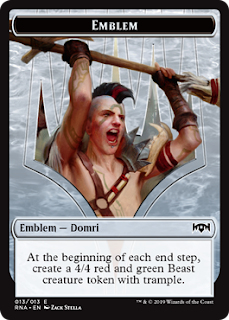