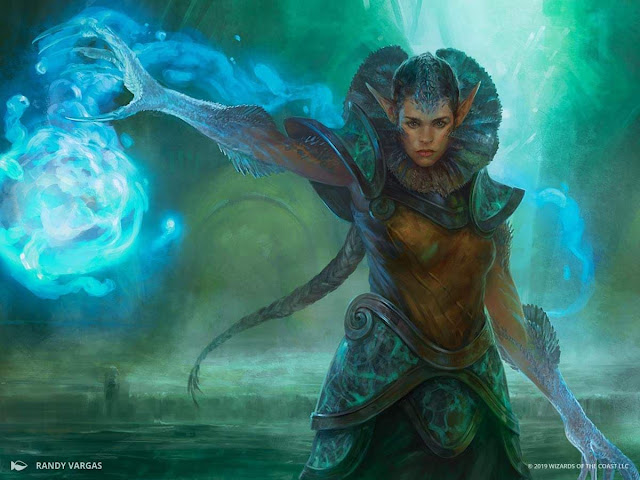 The spoilers keep on coming. Today we've seen the last Guildmage, a new Bolt, a Cleric to ancient gods, and an analogue to Disinformation Campaign. 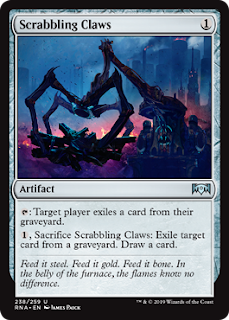 An interesting reprint. It's consistent graveyard hate like Relic to shrink Enigma Drakes. It's targeted removal to a creature that Find or Eldest Reborn is trying to bring back. 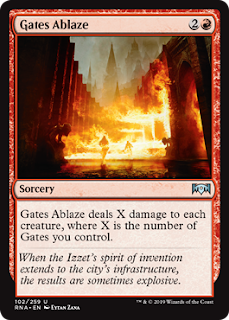 Now the Gates deck was around at the early stages of the Guilds season. It won by looping Chamber Sentry and drew many cards thanks to Guild Summit. The deck now has the sweeper, a cheap and scalable sweeper it needs to survive against the slew of Rakdos Aggro decks new Standard will bring. This has been a great excuse for Wizards to dust off their Gate design cards, and they read very nice in a dedicated Gates deck. 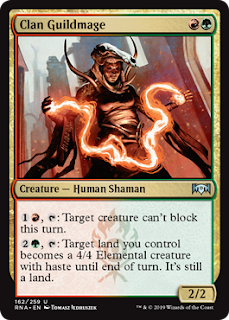 The last of the Guildmages has finally been revealed, and she's alright. The stun to a blocker will force through damage often, and making a land into a surprise 4/4 attacker/blocker will dumpster many people in Limited. Very strong Guildmage by comparison. 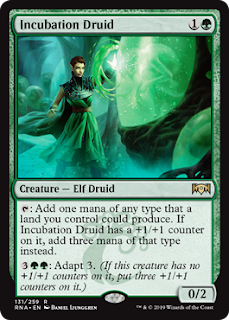 Well this is a strong mana dork. Adding any colour is good for birds (and it having zero power is a nice callback). It contributing to it's own Adapt, making it a 3/5 is also relevant. Adding three mana from one creature is very welcome in Green decks that can easily spread counters, or ones that can ramp and sneeze the counters onto it. Mono Green Commander decks, or decks that need the ramp and add counters easily can certainly play this card. 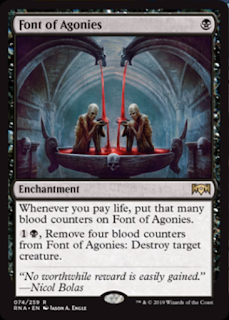 If you can enable this, in a lifegain Commander deck, or one that plays both Exquisite Blood and Sanguine Bond, then this is repeatable removal. Very valuable in Commanders like Oloro, or any deck that runs Razaketh as a repeatable tutor. 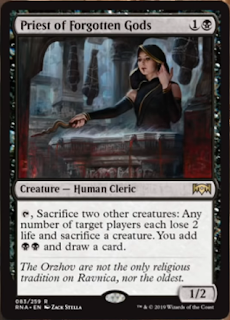 So every deck that wants to sacrifice creatures in the Commander format will play this card. Most Black/X tokens decks will love it for the loss, edict, ramp, and draw on one activated ability. It's all upside in decks like Meren, Karador, or Athreos. 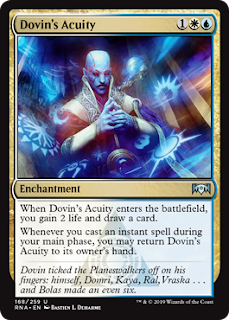 Though it isn't quite as strong as Disinformation Campaign, as forcing a discard is distinctly more valuable than gaining life. Repeatably drawing is good on both Disinformation and this. The trigger, recurring this card whenever you treat an Instant like it has Addendum. It's interesting that it's a 'may' trigger, unlike Disinformation. I'd say it's always worth bouncing, but that's just me. 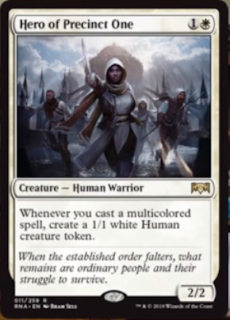 Lovingly named YMCA, this lady can certainly bring a board state of village people. It's a point of balancing that the spells have to be cast, otherwise, she'd find herself in Modern Humans very quickly. Otherwise, multicolour tokens decks, or Humans decks like Sigarda would surely play this. 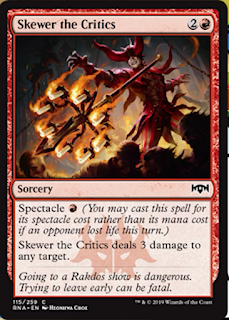 I do not care that it is a Sorcery. To be able to pay one Red mana for 3 damage in Standard, or another way to do so in Pauper is a very big deal. The Rakdos decks have so many reliable ways to enable Spectacle that this is a slow Lightning Bolt most of the time, and the decks that would utilise it will ensure they have Spectacle, and skewer at the best of times.