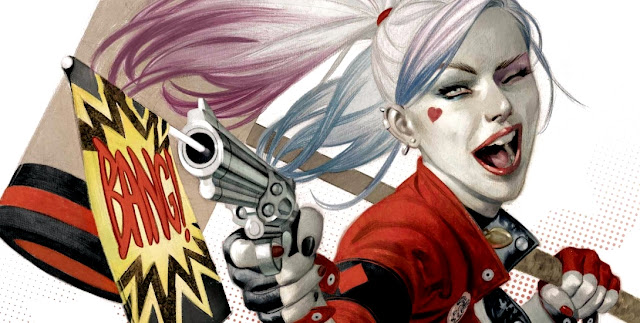 Writer: Sam Humphries
Artist: John Timms
Color Artist: Alex Sinclair
Letterer: Dave Sharpe
Review by Philip Clark
Summary
‘Hunted By The Bat’ Part One is a return to form for Harley Quinn. With Humphries back at the helm, the story continues for our beloved Clown Princess. Continuing on from the shocking events of issue #55, Harley is left trying to deal with some pretty heavy stuff. Not only that, but a certain detective finds evidence that points to Harley being a murderer!

The story in Harley Quinn is just blowing me away right now. Everything that Humphries is doing with this title is incredible. Characters are introduced that seem throw away, and yet you know that they’ll come into play later on. The supporting cast is just as interesting and complex as the titular character.
There are a couple of panels in this comic that knocked me out. They’re just pure gut punches. Fantastically written by Humphries, and only enhanced by the artwork of John Timms.

The only negative I have with this comic is that the character of Mirand’r isn’t in it for long enough. I love the fact that she’s slightly more cooky and quirky than Harley is. She seems like a perfect fit for the vibe of this series. A new triangle of Harley, Tina and Mirand’r please Sam! That’d be a fabulous trio, one that would get a lot of love too.
Like I said, that’s really the only gripe I have with this issue. It's good to see this title back on top form.

In case you haven’t realised yet, I am simply loving this run. There’s an underlying story that has been built up over the last few issues. A new thread was introduced in this issue that I can imagine Humphries spreading over the next few months. I’m certainly looking forward to whatever he and the creative team has in store for Harley Quinn.