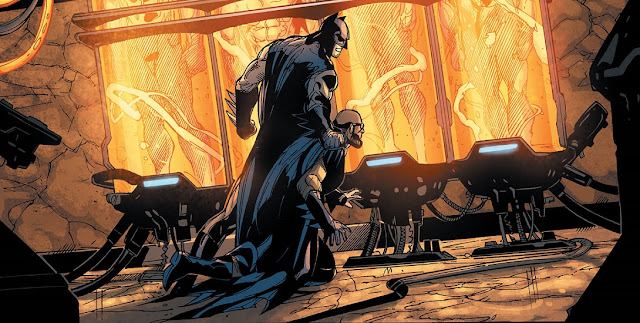 “Mythology: Hell And Back” 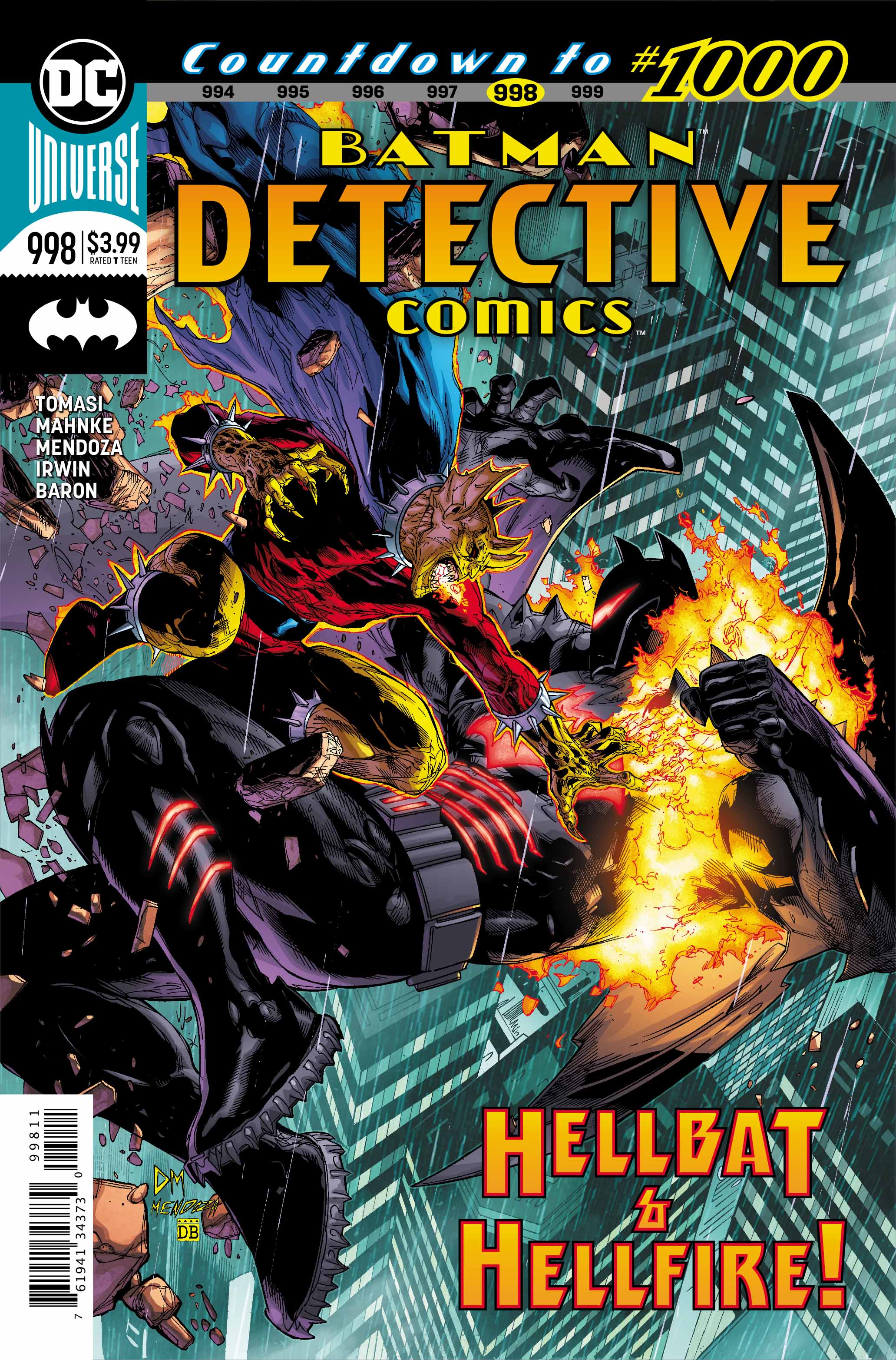 This series is on fire! The road to Detective Comics #1000 is raging with a heat powerful enough to rival perdition’s flames… quite literally. On his quest to save his mentors, the people who helped make him the man he is, Batman encounters the Demon Etrigan. Hot stuff!
After another encounter with the morphing monster that can assume the shape of all the Dark Knights enemies, and his closest allies, Batman tracked down Hugo Strange at the end of issue #997. I must admit that after reading the “Night Of The Monster Men” stories, Strange was high on my list of suspects too.
Peter J. Tomasi’s love for Batman, and clear knowledge of his backstory, is a joy to read. It’s so logical that Batman would seek tutelage in the mystic arts, both for defence and to help instil fear in his enemies. His training with Zatara and Zatanna during his youth is well documented (see Detective Comics #958-#962 for more on that story), so hearing that Bruce also worked with Jason Blood is fascinating, and clever. 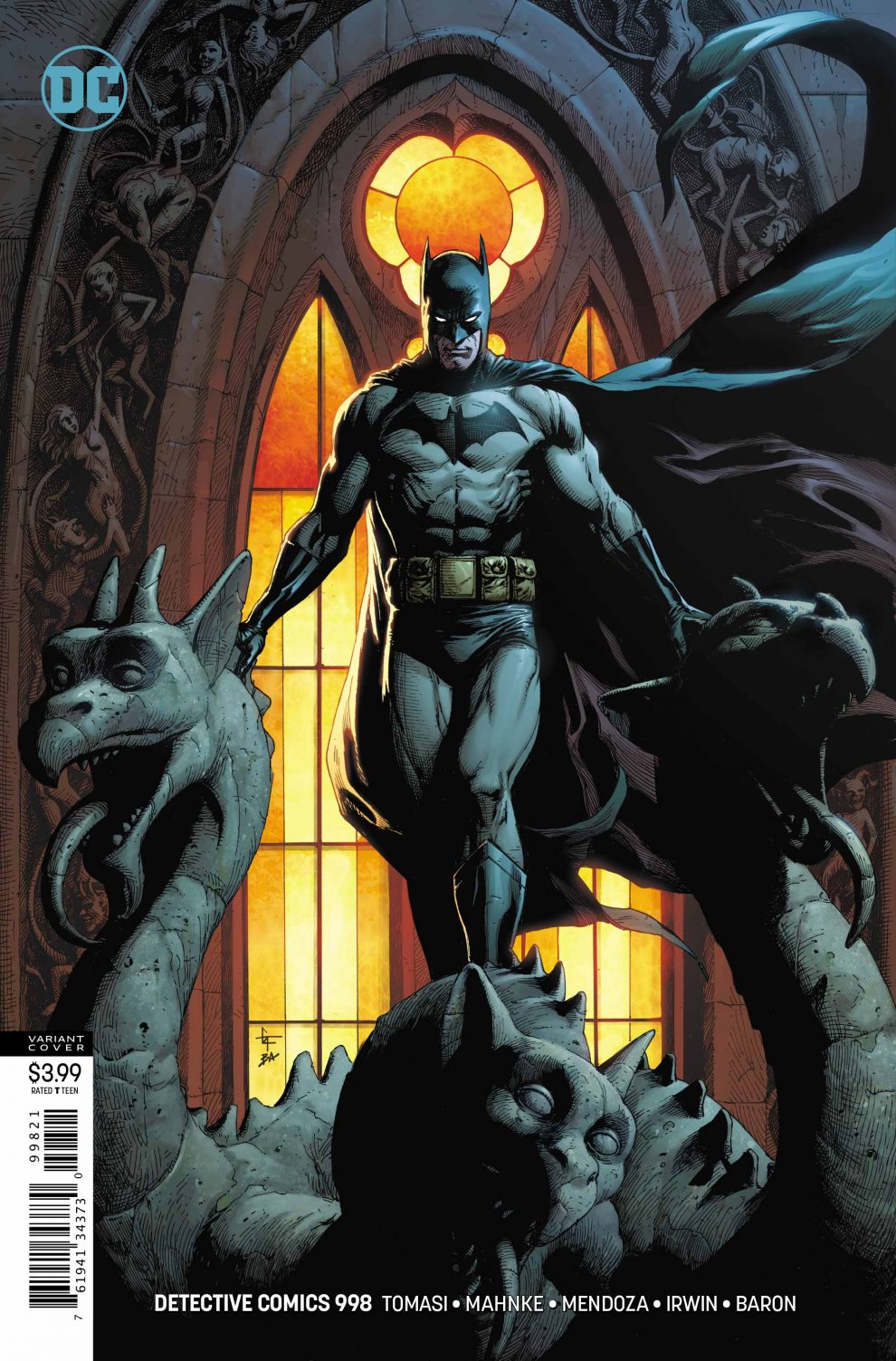 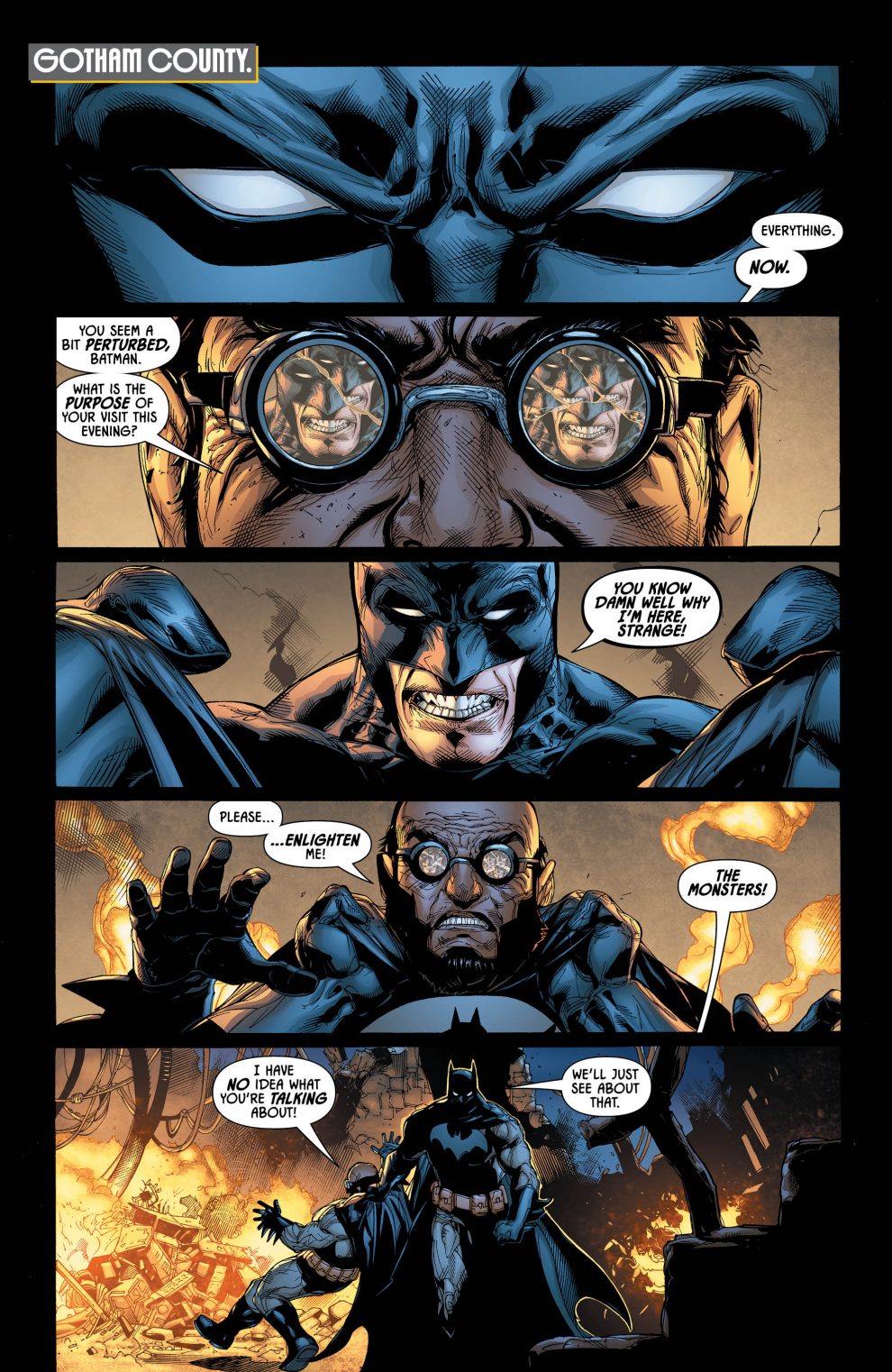 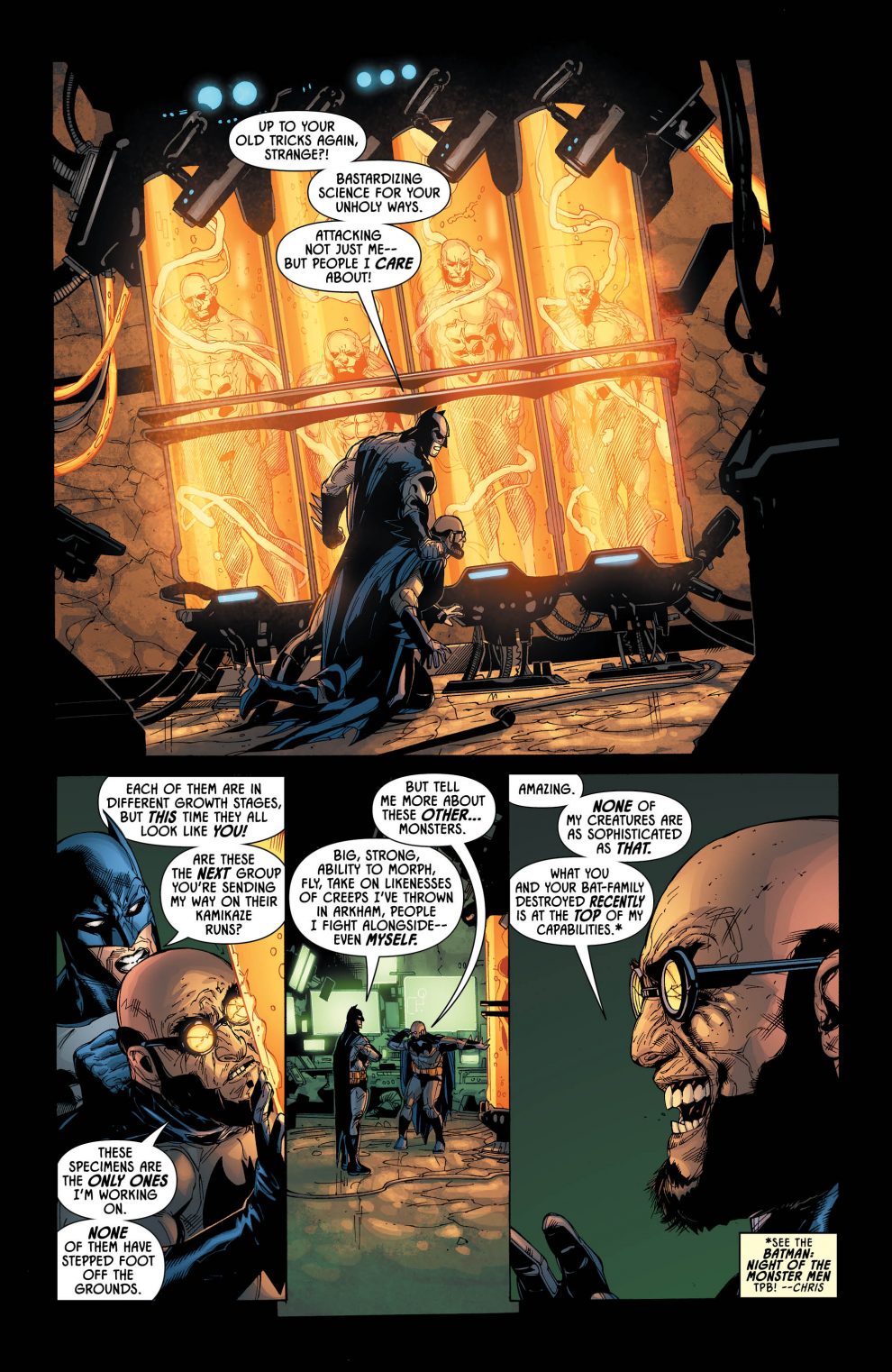 Both the covers for this issue are amazing! First we have Gary Frank’s Gothic masterpiece, beautifully colored by Brad Anderson. Then we get Doug Mahnke’s Hellbat and Etrigan piece, inked by Jaime Mendoza and colored by David Baron. Wow.
The other thing Mr. Tomasi does beautifully is remind us of some of his own previous, excellent work on Batman. Seeing the Hellbat armor took me right back to the excellent New 52 Batman And Robinseries, which was also written by Peter Tomasi.
That battle-suit is red hot, and Doug Manhke’s take on it is absolutely fantastic. Every page is beautifully drawn in this issue, and the inks by Mendoza and Mark Irwin work perfectly with the pencils. The only reason I know that there were two inkers on this book is because the title page said so.
David Baron blows me away. This guy’s coloring multiple titles right now and changing his style between them. Just this week I’ve been lucky enough to review Detective Comics and The Batman Who Laughs. I strongly urge readers to pick up the latest issues of these books and compare them side by side. Can you believe that these were colored by the same talented artist? No, I didn’t think so. Baron’s versatility and creativity are astonishing. 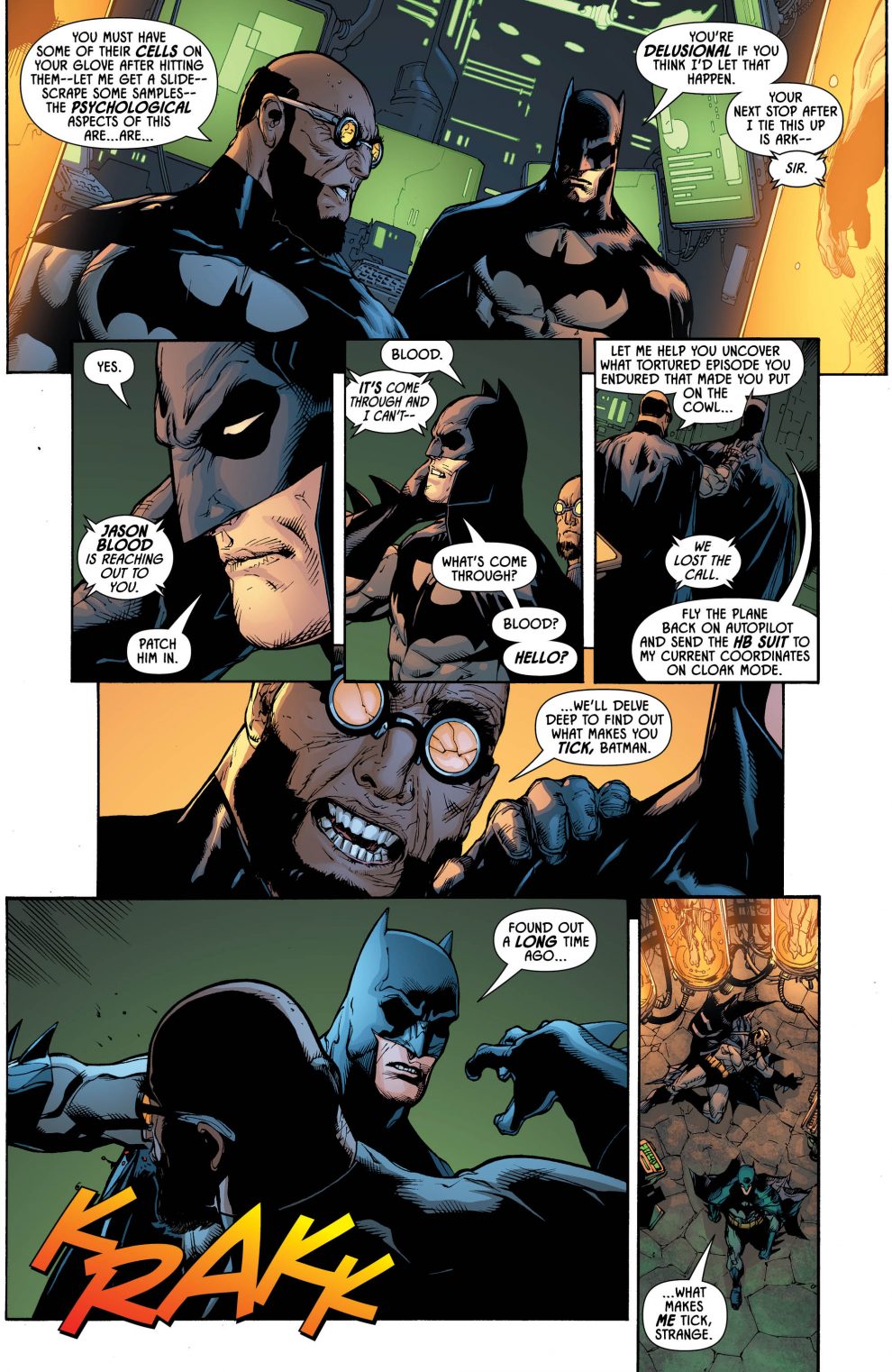 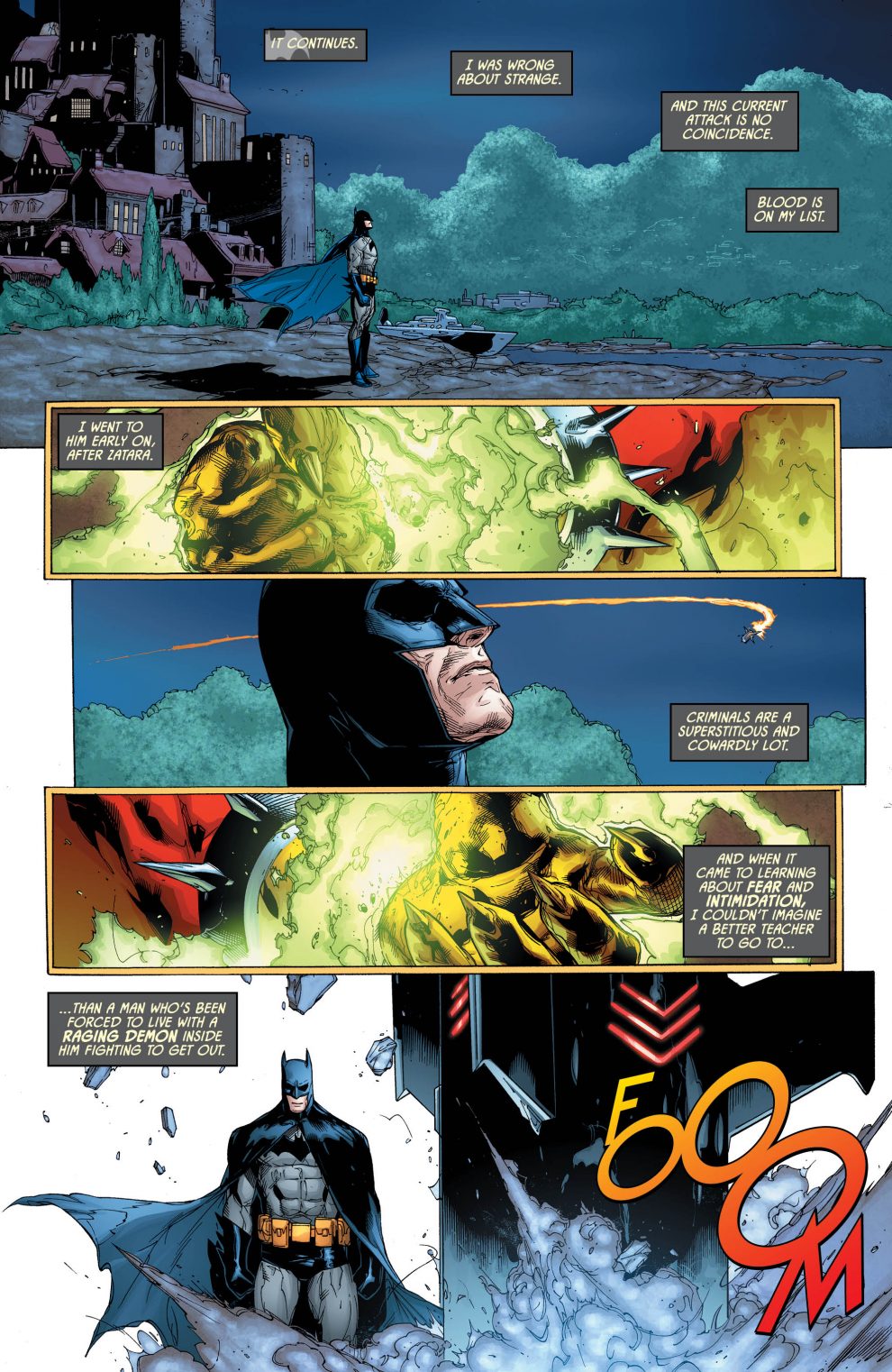 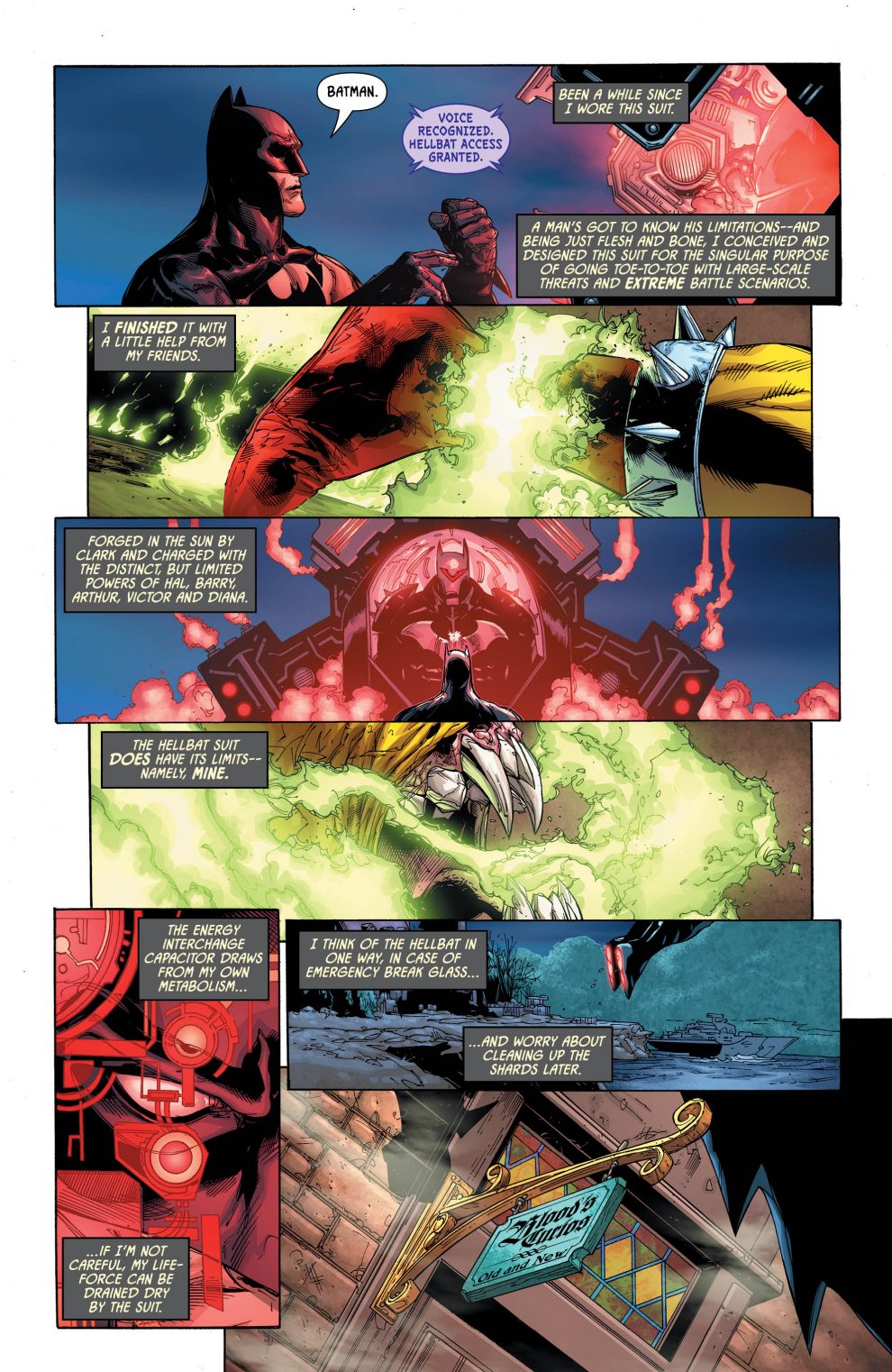 No Rest For The Wicked

I have to actually give props and absolute respect to letterer Rob Leigh, once again. How many books is this guy working on right now? Once again he’s incredibly prolific, but his standards never slip. Does this guy even sleep? I particularly love his teleportation sound effect near the end of the issue. I wish that Rob was on social media, so that fans could let him know how much we appreciate him.
Doug Mahnke is a machine. I urge readers to look back over issues #994-#998 of Detective Comics. Please remember that this title is published twice a month. This means that Doug has pencilled two complete comics every month for the past five months, he’s also drawing issue #999 and a story in ‘Tec #1000!
R  E  S  P  E  C  T

If you’re a fan of surprise twists and cliffhangers, you’ll love this issue. Once again I have nothing even remotely bad to say. This is DC’s oldest, longest running comic, and the latest issue continues the title’s tradition of excellence. In a universe full of horrors, monsters and demons, this title stands out. Detective Comics #998 is one hell of a great read.