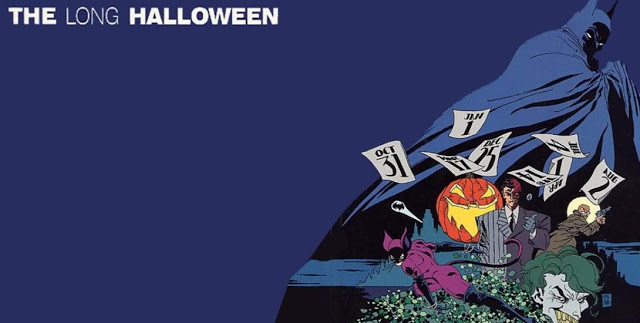 Bruce Wayne is under Poison Ivy's thrall, while the Falcone crime family adds a new, deadly member to its ranks.

Let's look at the cover first. While it is also a great study of light and shadow, that is not the main feature. It shows Poison Ivy  wearing a Batman necklace, symbolising that she has a him under her control. Furthermore, her hair is made up of little  clover leaves and shamrocks, to indicate the St. Patrick's Day holiday. In a clever, subtle way, the cover demonstrates this issue's micro-theme of "Not everything is as it appears".


Not Everything Is As it Appears

The very first sequence of the comic demonstrates this theme. We see the Gotham Penitentiary guards escort and release an unseen prisoner. Based on the giant silhouette and foreboding eyes, readers are expecting to see a monstrous figure. However, it is revealed to be Roman Falcone's daughter: Sofia "Gigante" Falcone.
Sofia goes on to play an integral part for the rest of The Long Halloween, as well as its follow-up Dark Victory.

On the other side of town, Bruce Wayne tells his bank board members that they are now free to distribute Falcone's dirty money. This is a reversal from his previous stance at the beginning of TLH, where Wayne was ardently against using the bank to launder Falcone's cash. This action is so out-of-character for Wayne, that even his board members notice it. Once again, not everything is what it appears to be.
Of course, readers know it is, because Wayne is under mind control by Poison Ivy. It's interesting that Wayne still retains his thoughts and the ability to monologue, but he just has no will or control over his body.

Harvey's Slide to the Dark Side

In Gordon's office, Harvey Dent and Gordon look over pictures of dead mobsters. Apparently Holiday unintentionally caused a gang war between the Roman and Maroni, but the real problem is how casual Dent is about wholesale murder.

"The nice part about dealing with these guys, Jimbo- they all want to do our jobs for us."

Artist Tim Sale utilizes visual foreshadowing again by having half of Dent's face in the shadows whenever he says something reprehensible.
In a way, Dent's secret desire for mobsters to be killed off is another display of the theme of "Not everything is what it appears".  At the beginning of the series, Dent is portrayed as Gotham's last hope. Gilda, his wife, later describes him as "an Apollo", a perfect man. But, as we can see in this scene, behind closed doors, he is far from perfect.

The opening shot of the next scene is another example of the issue's theme. We are greeted with a .22 pistol being shot off. We're tricked into thinking that it's Holiday, but it is actually Carla Viti holding the gun.
When Sofia Gigante greets her, Viti explains that she "Forgot" to give the gun to the police when Alberto was shot. In truth, that's a pretty stupid explanation, since the police should know Holiday's modus operandi of leaving the weapon at the crime scene.

However, the scene reveals two important pieces of information. One, the Roman did something to free up cash flow again. Two, he's is planning a hit on Maroni at midnight.

The Use of Color to Set the Mood

At Wayne Manor, we observe Wayne and Poison Ivy at dinner in the mansion's dining hall. Now seems to be a good time as any to talk about the use of color in this issue. In almost every scene, green is used in some form.

While the use of green doesn't make literal sense, it sets an uneasy tone, and feeling that something is not right for the entire issue, just using visuals alone. For example, the flame in the Wayne Manor fireplace burns green, which makes no sense at all. While it visually ties-in with the St. Patrick Day's motif, it also reminds readers that something is very "Off" about the scene.
Speaking of "Off" the Ivy plot line has some unintended plot holes in it.  Like, if Ivy took control of Bruce on Valentine's Day, then what has she been doing with him for over a month? Was the bank job the only thing she accomplished with him? Did anybody in Wayne's life even notice that he was acting weird? What about the fact that Batman disappeared for a month? What happened to Alfred? Was he locked up in a pantry or something?

Unfortunately, this is when the comic's "real-time" gimmick falls apart a little bit.

Anyway, Catwoman interrupts dinner and targets Ivy. When Wayne tries to restrain Selina, she cuts his shirt open to reveal a whole bush of leaves controlling him.

While Catwoman holds a weak Wayne, Ivy escapes.
The Roman, Maroni and Subversion

At the same time, Holiday shoots up a roomful of armed men. While we're made to believe that the killer is targeting the Roman's men, ready to hit Maroni, it's actually the reverse. Maroni's men are the ones that get killed. This is revealed when Sofia pulls up in a car and observes Maroni's brown house full of bullet holes and a leprechaun figurine.

"Someone beat us to the punch. This... changes things."

As Sofia's car pulls away from Maroni's place, Maroni himself observes her in the window. He now believes that the Roman is behind Holiday, thus fuelling his desire to take down Falcone for the rest of the series.
Once again, not everything is what it appears to be.

In the final scene, we find out that the Roman bankrolled Ivy to control Wayne, in order to use the bank to launder his money. Despite all of the Roman's  talk about the "Freaks" taking over, he still isn't above employing them for his own means.
The Roman believes that he is above super villains and, in an act of arrogance, he believes they can be controlled and used for his own means. First, he employees Ivy, then the Riddler, and even later on Scarecrow and the Mad Hatter.

The irony is that super villains will end up being the end of him and overshadow him in infamy.

Writer Jeph Loeb and Tim Sale are masters at laying plot threads and at an engaging pace. They feed off each other and create an unsettling and subversive piece of literature.

For more Fan Retrospectives of The Long Halloween, click here.