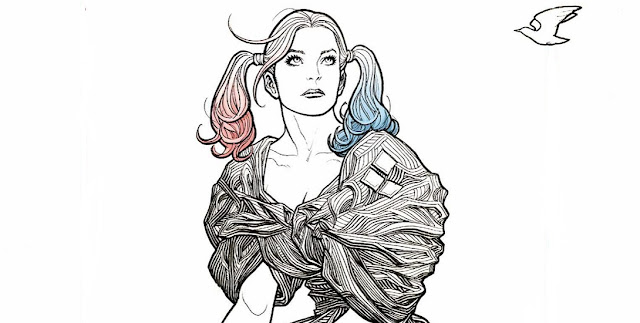 “The Trials of Harley Quinn: Death Trap” continues the story of Harley being tested by the Lords of Order and Chaos to be their kick ass Angel of Retribution! Already having gone through two trials, Harley’s learned some pretty important lessons on the way.
With the new revelation in this issue that the trials could be hazardous to Harley’s health. Harley starts looking at them in a new light. Not that she lets it affect her in any way though!

Harley Quinn is quickly becoming one of my all time favourite comic books. I find her, as a character to be fascinating. She’s someone that can be both completely independent and bad ass, while also being very vulnerable. There are few, if any, other characters that can pull this off as well, or easily as Quinn does.
Humphries creates a beautiful, well written story that even includes a flashback inside a flashback! There’s mystery, comedy, and bucket loads of emotion. Everything a Harley Quinn issue needs, and for the most part has.
Basri does a fantastic job at filling up the pages with hordes of alien enemies, whilst also portraying the fear Harley is feeling. I mean, just look at the panels below. They’re incredible!

What I’d like to see more of, is more history behind the trials. Mirand’r constantly mentions that previous trials have all ended with the grizzly deaths of the participants... I’d like to see that! Maybe as a flashback, or even the Lords of Order and Chaos could make an appearance? That’d be pretty cool.
It just feels like Humphries is taking us along for a ride with the trials, and we’re supposed to nod along and follow. More backstory, please?

Yet another very strong issue of Harley Quinn. I’m seriously loving this run at the moment, and I highly suggest picking this up if you can! You won’t be disappointed.
I hope DC manage to keep Humphries on this title, he’s doing such a great job with Harley Quinn. He should never leave!