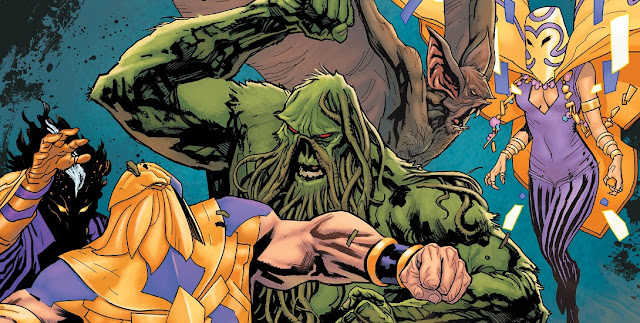 “The Lords Of Order” – Chapter Three 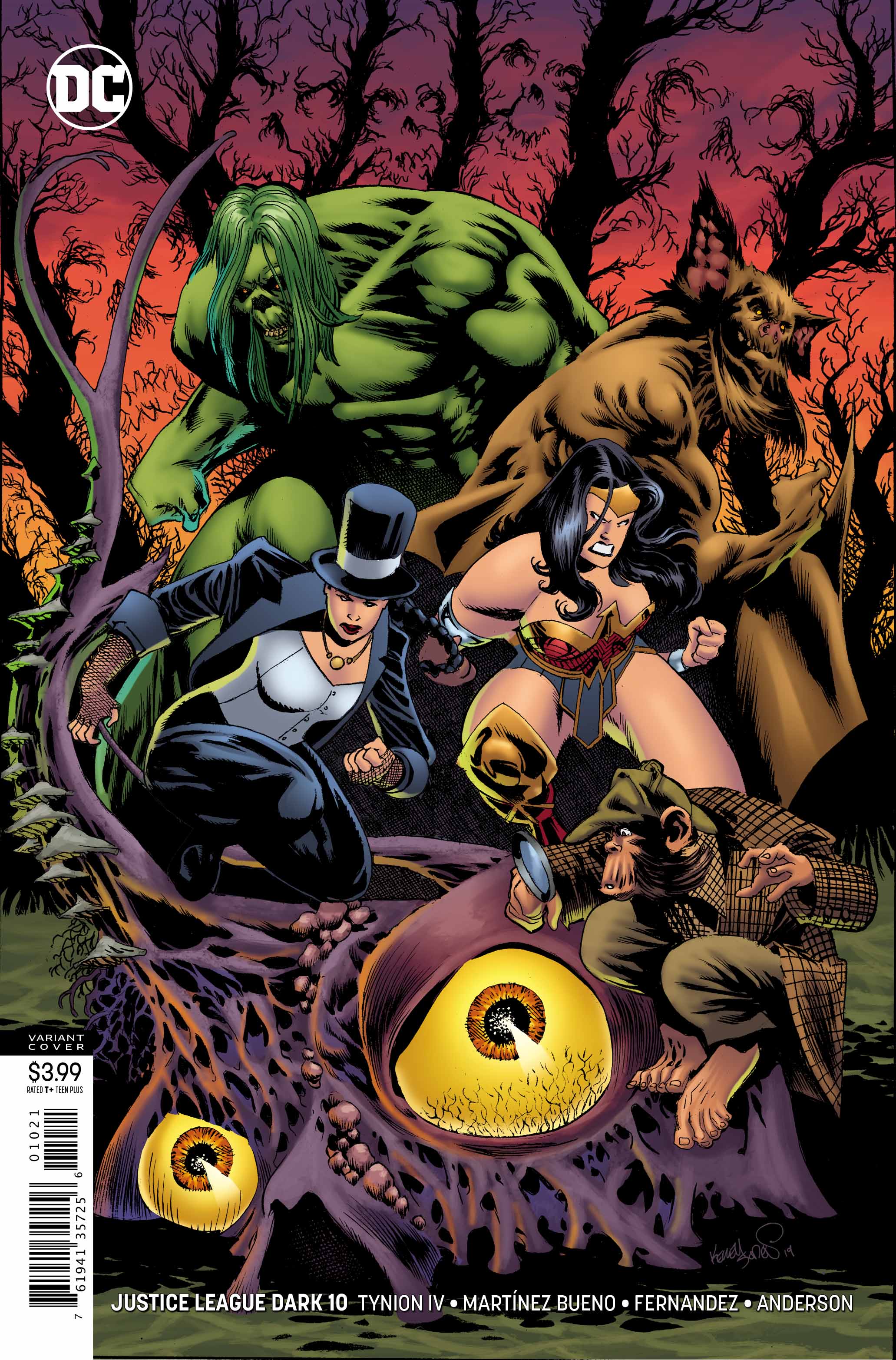 The Lords Of Order: Doctor Fate, Sister Symmetry, Master Pattern, Count Control and Lord Structure, are on a mission to erase mystical power from the face of the Earth. The question remains as to what this will mean for magic users, particularly the five people hosting the spirits of Order within their mortal bodies. What will become of them?
James Tynion IV is showing us that the use of magic is dangerous to anyone daring enough to try. Far from making the people who wield these powers unstoppable, it’s making them targets. Zatanna and other magic users have abilities that could devastate worlds, but have placed limitations on themselves in order to maintain a level of control. Backwards spell casting, etc… The Otherkind have no such qualms or limitations.

Light/Darkness. Good/Evil. Order/Chaos… Is It That Simple?

Nabu and his brethren seek to halt the onslaught of the Upside Down Man and the Otherkind by destroying magic. They believe that this will restore order and balance to the universe.
Way back in 1986 DC Comics published Swamp Thing (Vol. 2) #50 written by Alan Moore. This story was the culmination of the “American Gothic” story arc. Tynion has clearly been inspired by this legendary series of comics (but let’s be honest, who hasn’t?) as he’s quoted from them and built his stories around them since the beginning of his Justice League Dark run. If “American Gothic” taught us anything though, it’s that there are no absolutes. There is no evil without good to measure it against, and darkness isn’t the opposite of light, but merely its absence. 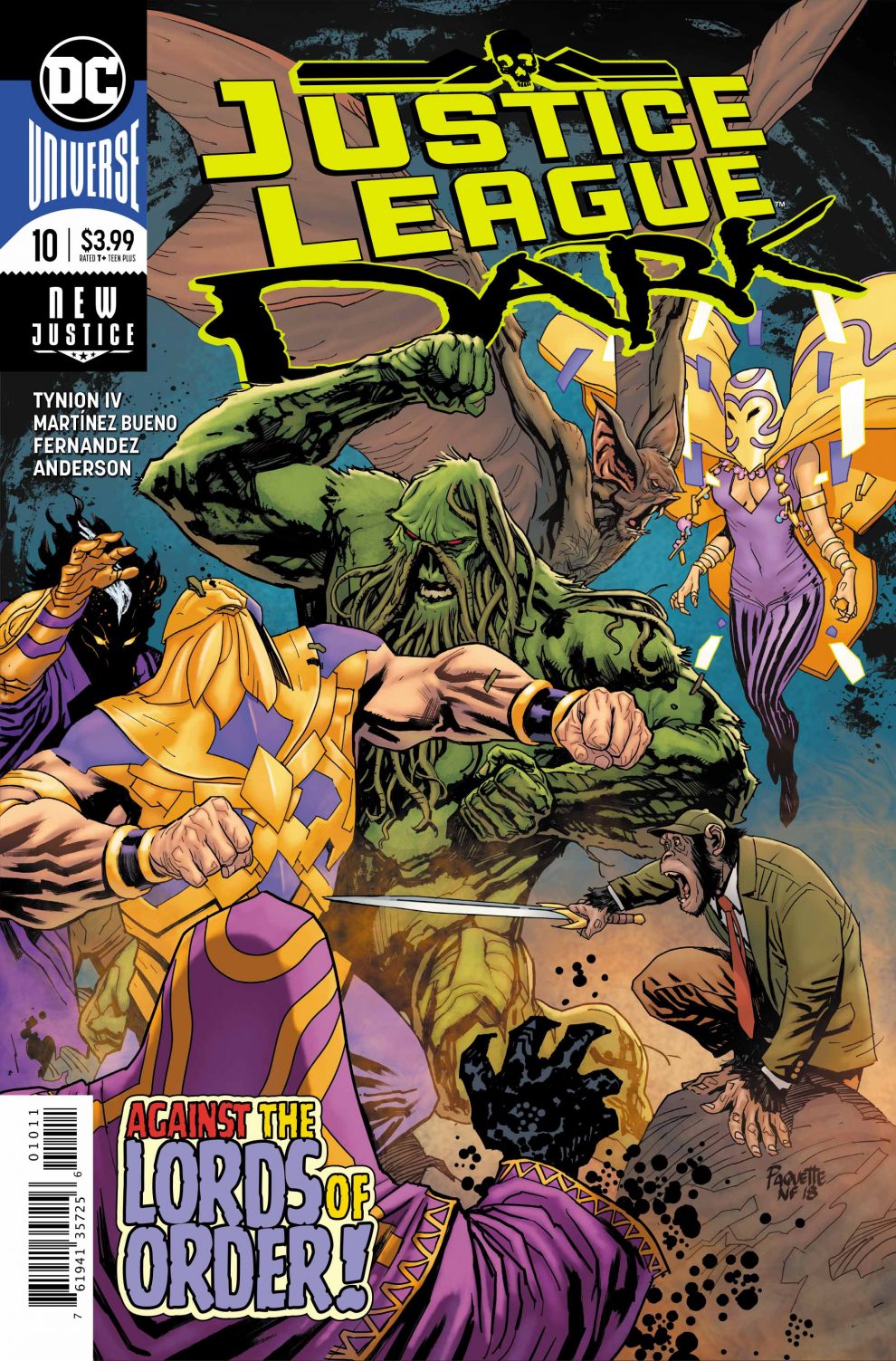 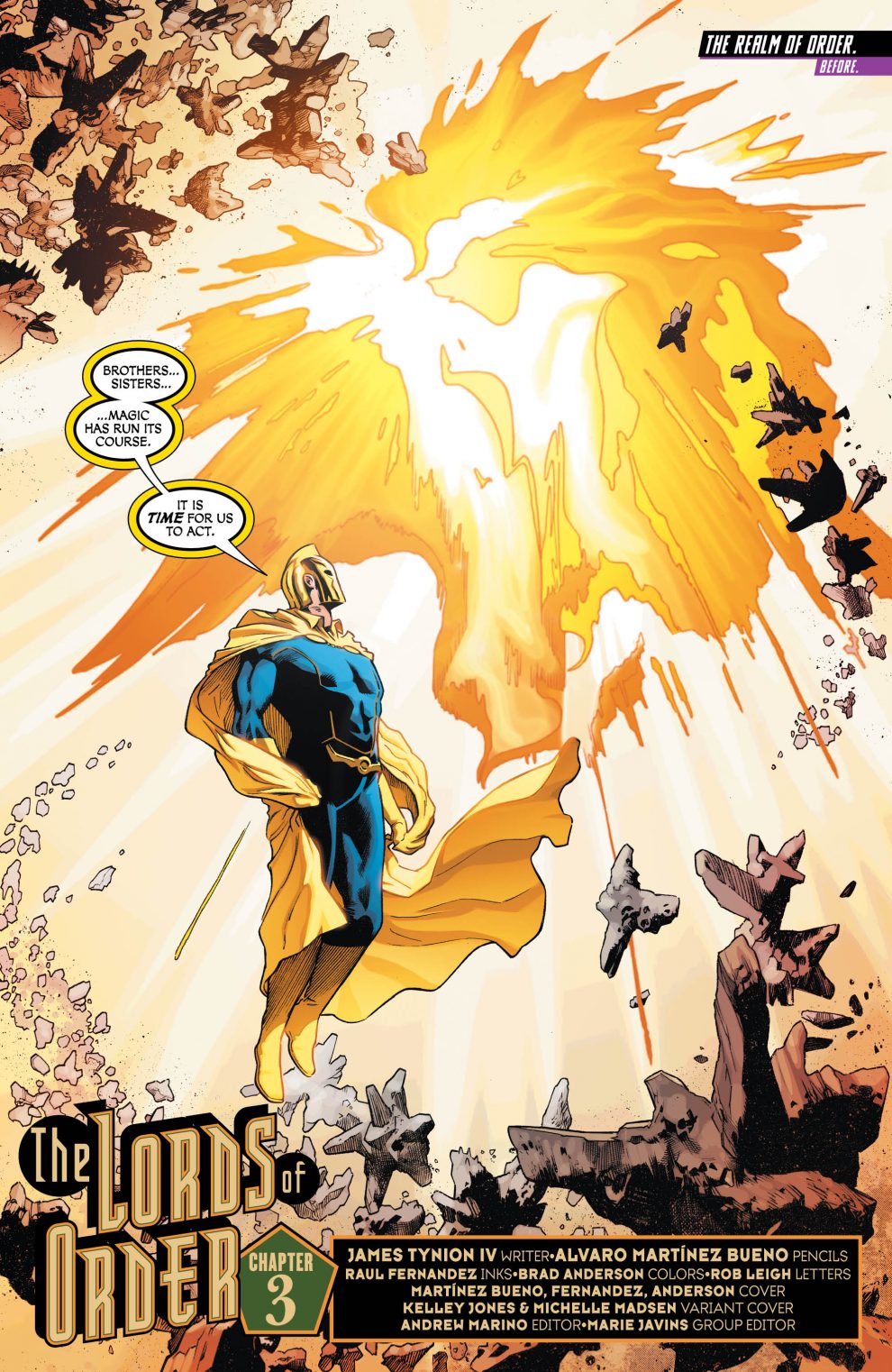 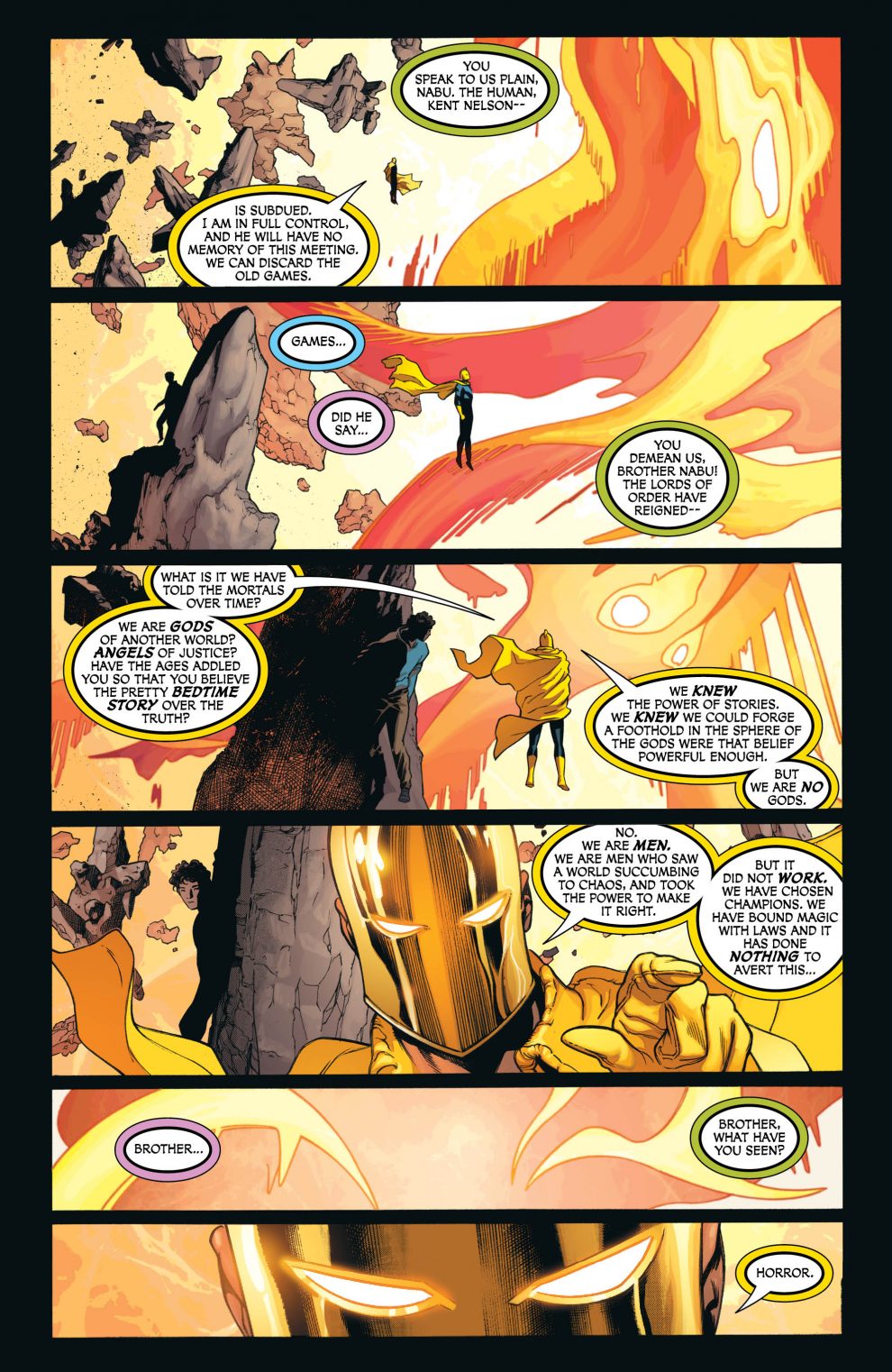 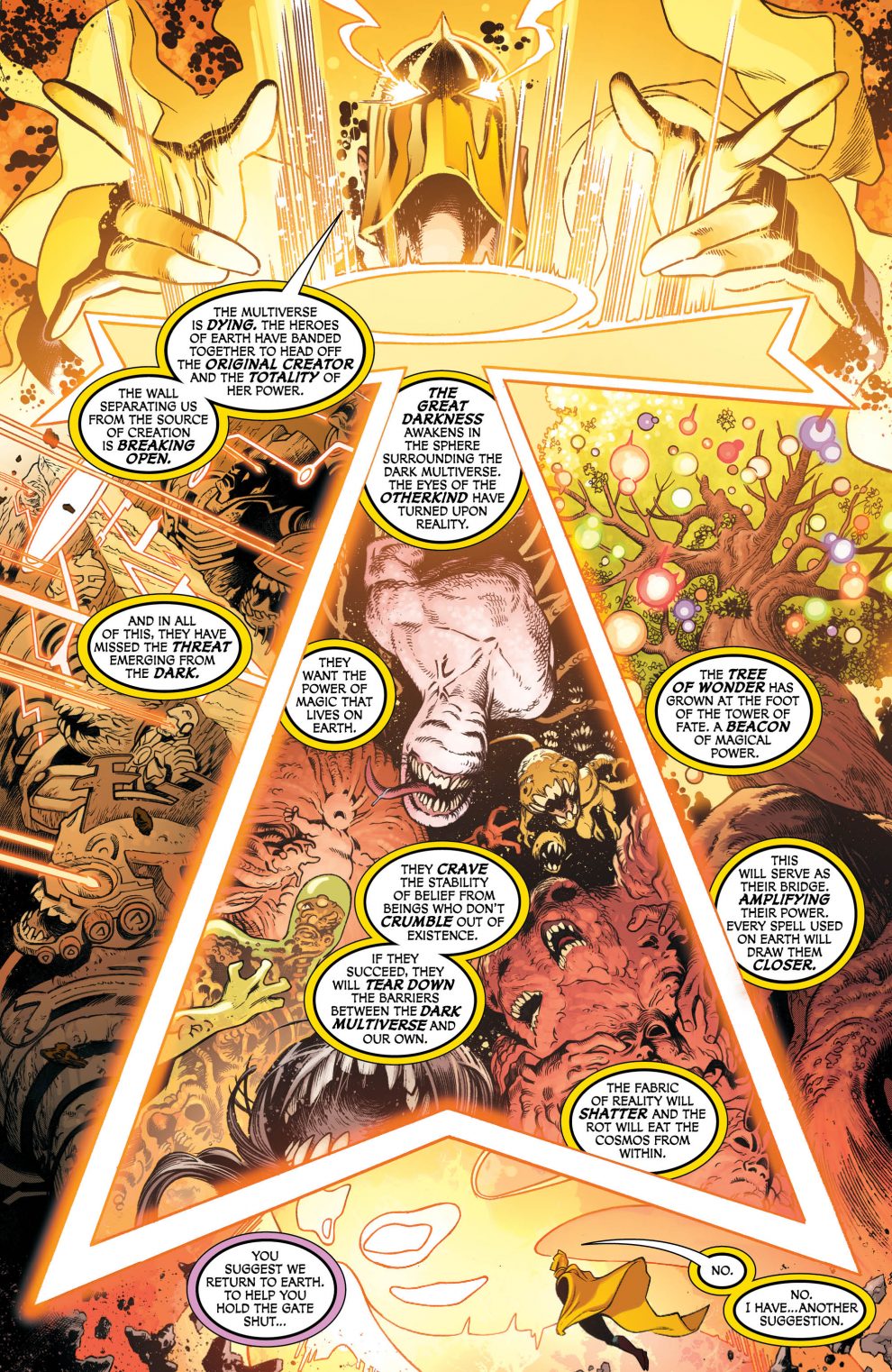 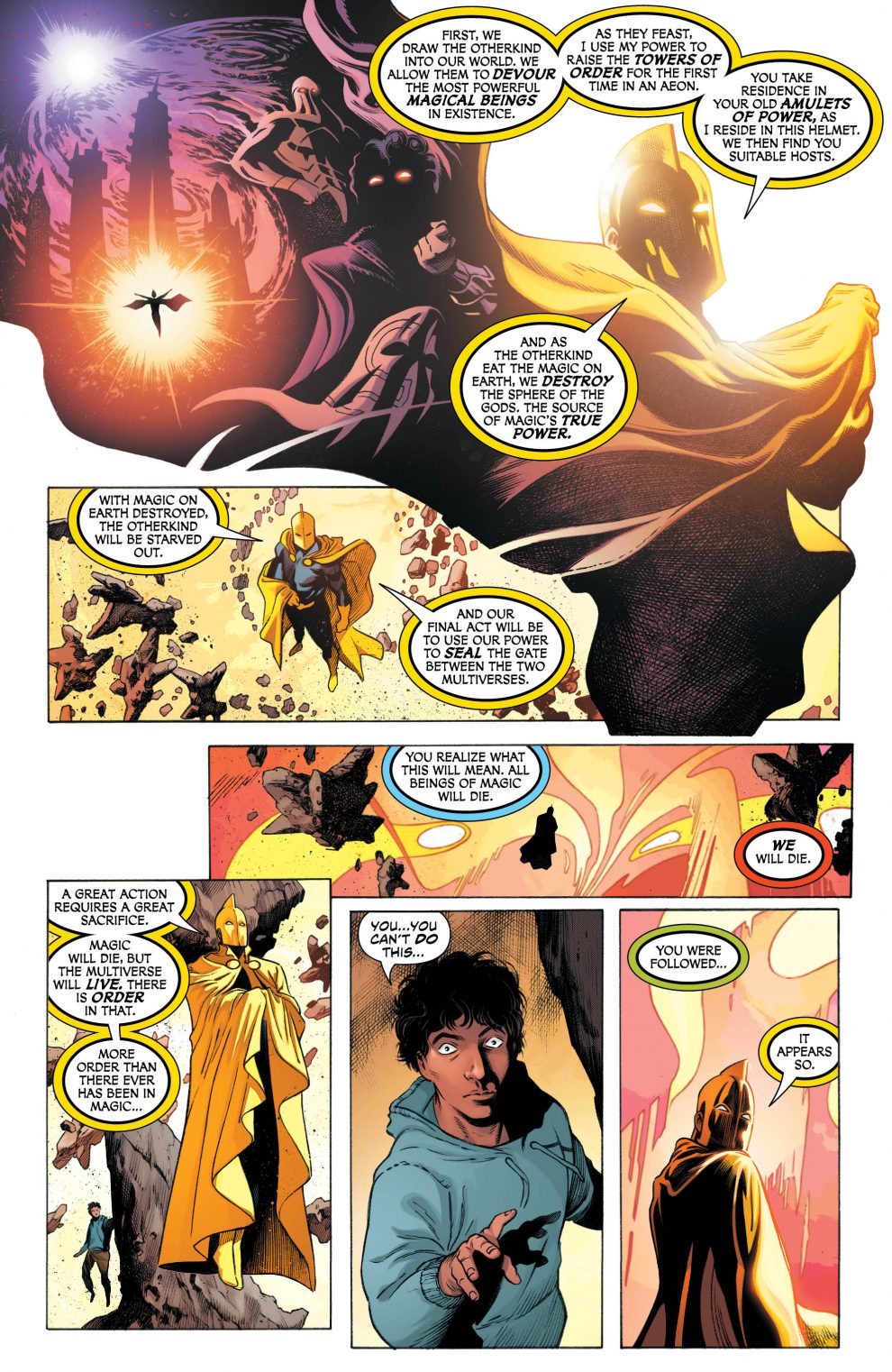 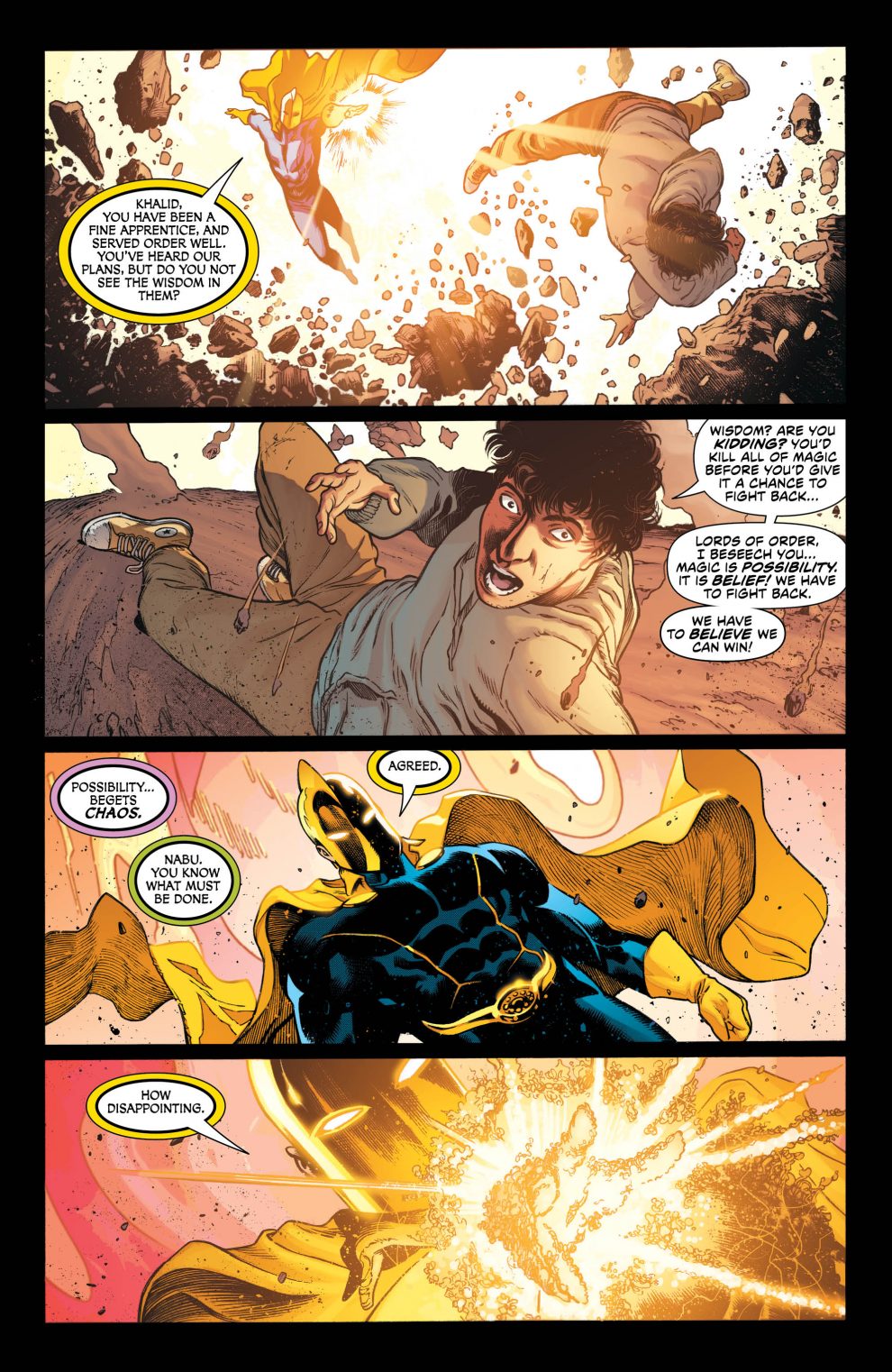 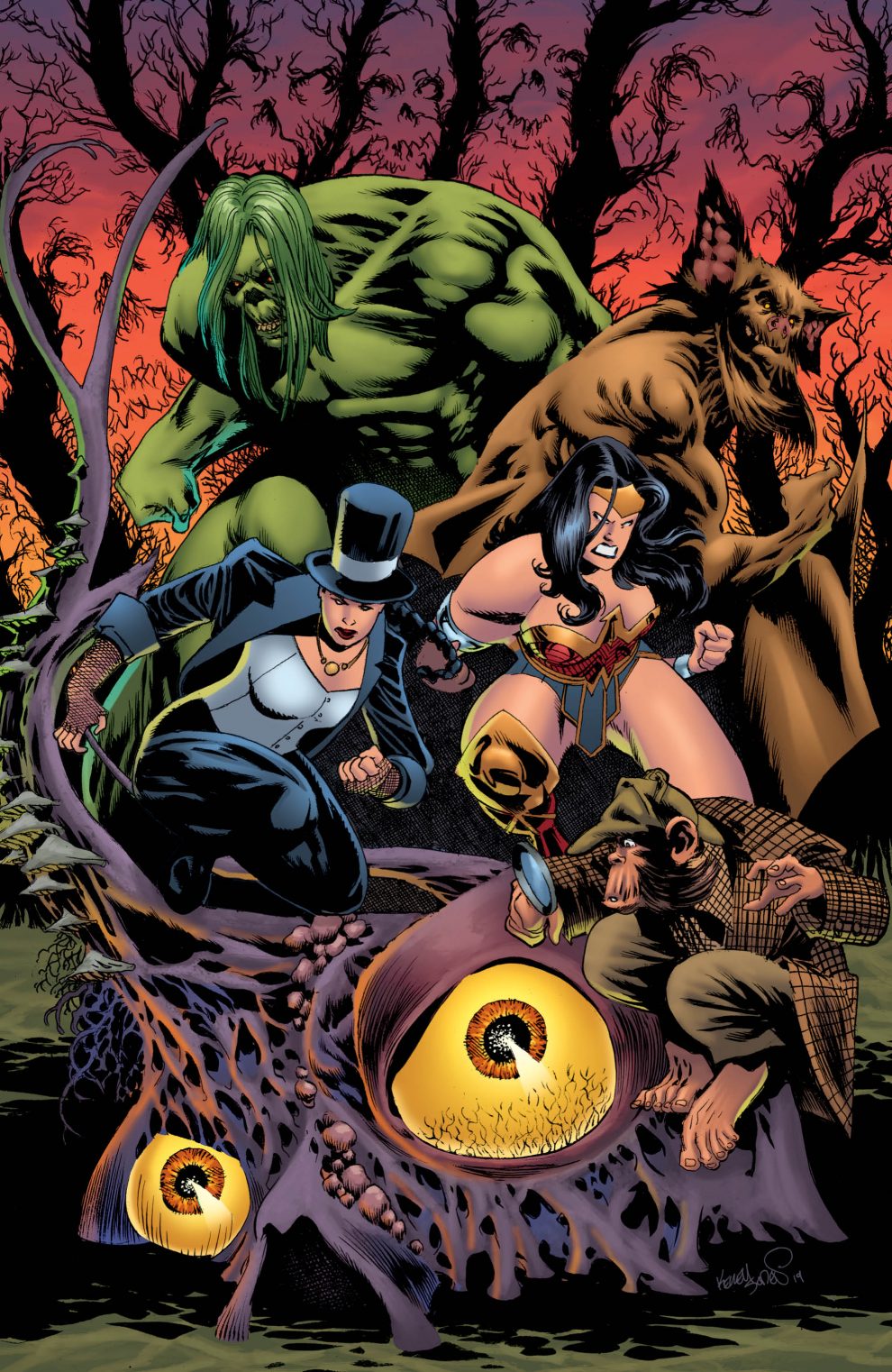 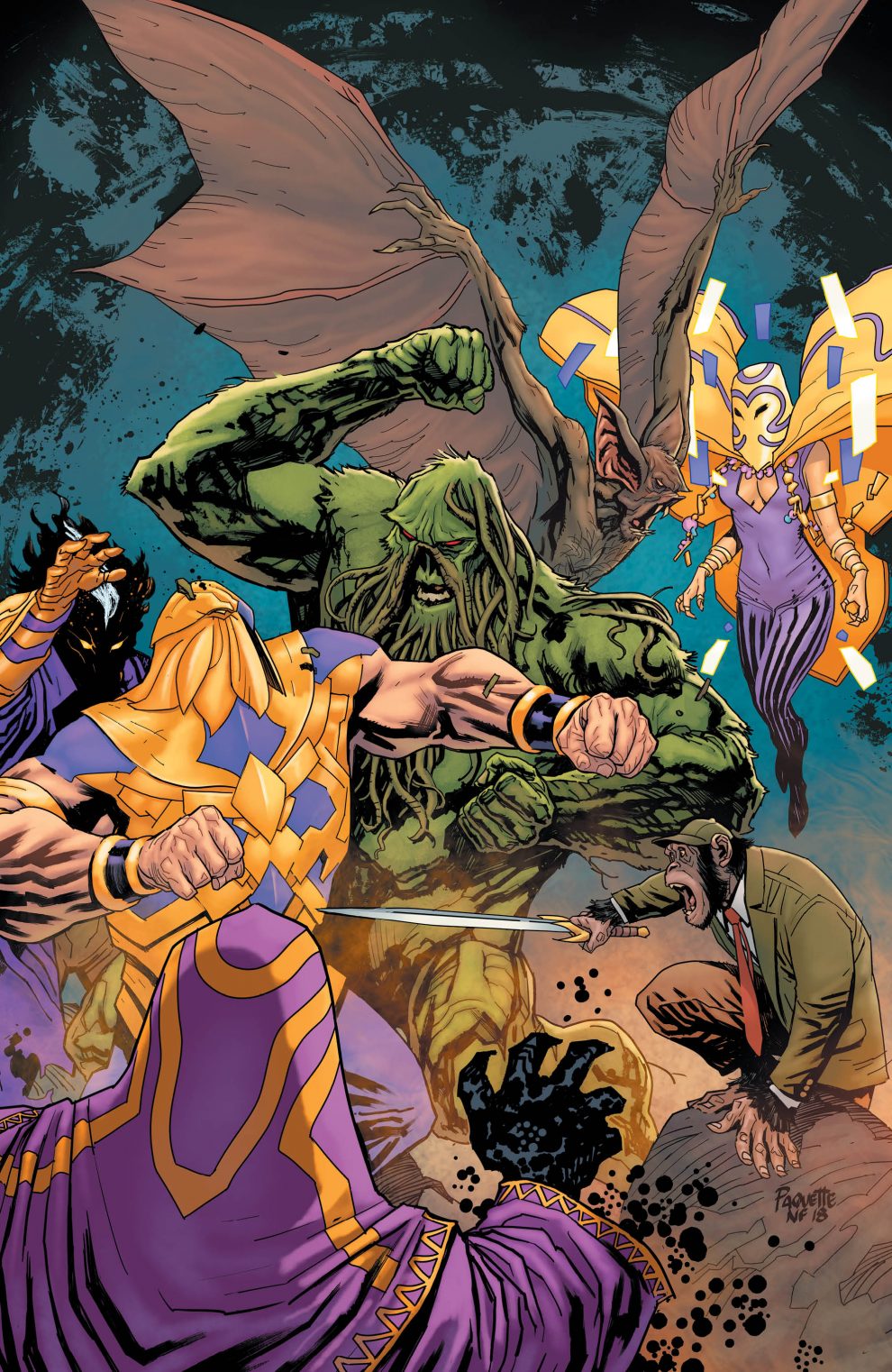 Order and chaos are both essential and, as with all things, the destruction of one over the other could do more harm than good. The five Lords Of Order are disrupting everything they claim to stand for, and only the five members of Justice League Dark stand in their way.
As always, Álvaro Martínez Bueno, Raül Fernandez and Brad Anderson have produced some eye kissingly gorgeous visuals to go with James Tynion’s brain bendingly clever writing. Check out page three (reproduced above) as just one example. These artists are producing magic of their own on a monthly basis, and I hope that no beings from this world, or any other, ever stop them. This series is wonderful.
Rob Leigh has created different color word balloons for Nabu and each of his compatriots, plus different font styles for Swamp Thing, Upside Down Man and the Otherkind, showcasing his talents. This is unquestionably one of the finest teams in comics.

This book is consistently a favorite every month. It never lets me down, but always makes me think. It thrills, chills and delights. Chatting with the artists and following them online has uncovered new secrets (and mysteries). Some of these will be divulged in issue #11 before blowing everyone’s minds in #12. If you think The Lords Of Order are impressive, wait ’til you meet the all-new Lords Of Chaos!
… Or have we met them already?
Yes, I went there.