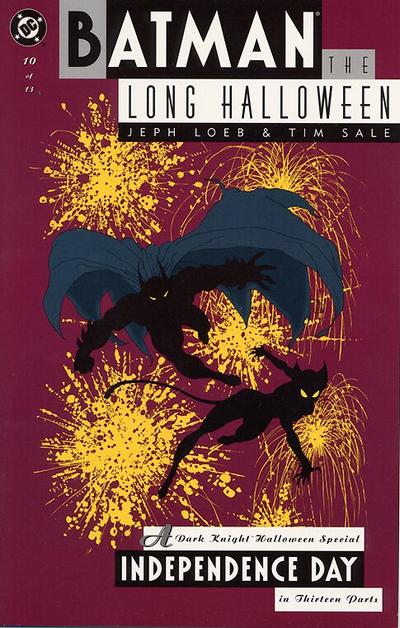 “What would it take to let go?”
That is the question that haunts everybody’s mind as the Holiday killer strikes again on Independence Day in Gotham City.
Meanwhile, Bruce Wayne and Selina Kyle are on a date at Wayne Manor. Selina asks Bruce why would he stay in a city that is rife with crime and got his parents killed. It would be so much easier to run away from it all. Unbeknownst to Selina, Bruce cannot leave since he made a vow to be Batman. Which incidentally is what makes Bruce break off his date early. Soon, Harvey Dent and Batman meet up on the roof of GCPD, where Dent informing him of another Holiday victim.

Why Tim Sale is an Artistic Genius

Dent reminds Batman of the deal that Commissioner Gordon and them made to bring down the Roman. While it is a callback to the first issue, the tone is completely different now. It has been almost ten months since they started their mission and they are no closer to catching Holiday. Since then, Dent has gone from idealistic to cynical and jaded. When Batman swiftly reminds him why they made the promise in the first place, Dent immediately is remorseful of his anger.

Artist Tim Sale uses the panel composition to visually foreshadow Dent’s eventual turn to Two-Face. Notice how when he is angry, his left, soon-to-be-scarred side is shown in the shadows. But when Dent snaps out of it, his right, unscarred is shown. It is easily the best use of visual foreshadowing in the series.
After Gordon and Batman examine the Holiday crime scene, Batman takes off to stop the Mad Hatter and Scarecrow from a bank robbery. Honestly, the fight scene is superfluous and has nothing to do with the themes of the comic. Well, almost nothing. It does give Catwoman a chance to fight alongside Batman.

After they make quick work of the Mad Hatter and Scarecrow, Catwoman makes a similar offer to Batman as she did as Selina to Bruce at the comic’s opening.
When Batman rebuffs her offer to quit, she quickly dismisses him with, “Your loss”.
“No, the price of independence,” replies Batman. 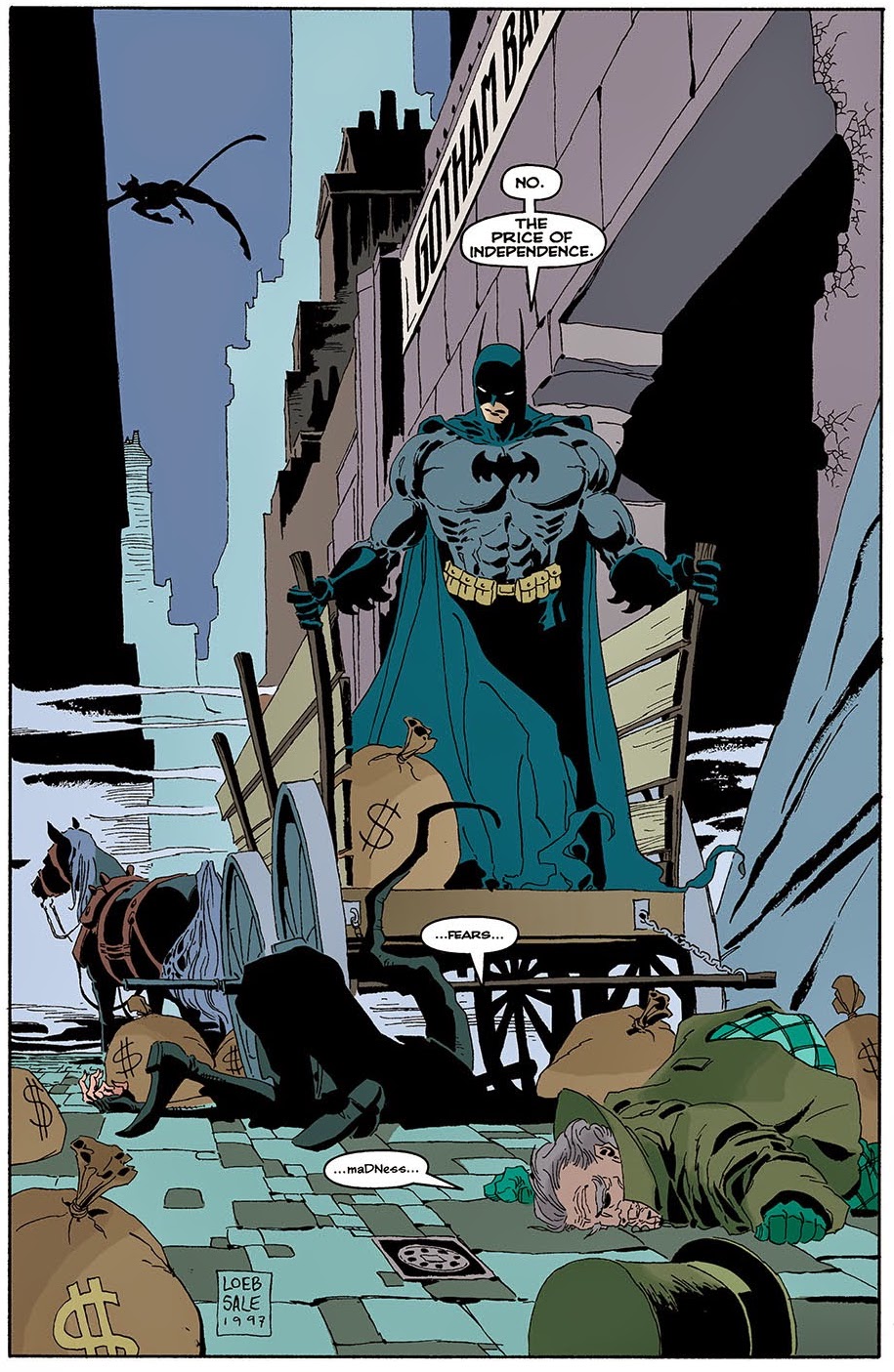 Batman’s reply to Catwoman is a statement saying that he is staying Gotham City, because he is fighting for a better tomorrow. Even though he knows that the road will be rough and even lead to sinister outcomes-as implied by the Mad Hatter and Scarecrow’s “…Fears…” and “…Madness” lines- Batman does not give up.
In this issue, Loeb really exploits the philosophical and historical implications of Independence Day to give more credence to his protagonists. American Independence Day came from the Revolutionary War where the then colonies fought back against an oppressive British government.
In his paper The American Crisis, philosopher Thomas Paine made a distinction between the soldiers who ran and those who stayed to fight until the end. According to Paine, the ones who never gave up are known as “Winter soldiers” for they fought even through the harsh winter snow.
Similarly, Batman, Commissioner Gordon, Dent, and even Barbara Gordon are all winter soldiers for fighting through what is one of Gotham’s most trying times. Most interestingly, the one person who does give up on Gotham is Gilda Dent. In retrospect, her dialogue foreshadows her character arc later on.

This may be one of the best chapters in The Long Halloween. The use of metaphorical images and historical allusions makes this one of Loeb and Sale’s more sophisticated works. The comic is darn near perfect and is one of my favorite chapters of the story.

To check out our previous reviews of The Long Halloween chapters, click here.
Images May Be Subject To Copyright
(This review was originally published on the Dark Knight News website on July 31st 2018)