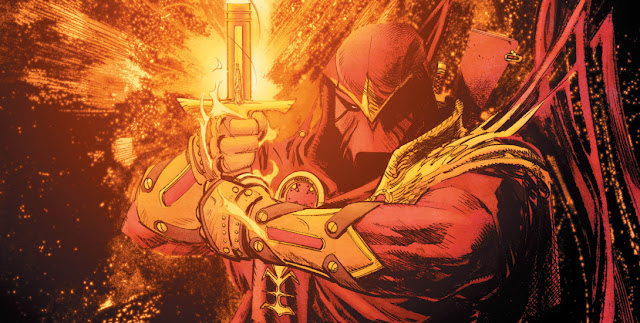 “Batman: Curse Of The White Knight” – Book One 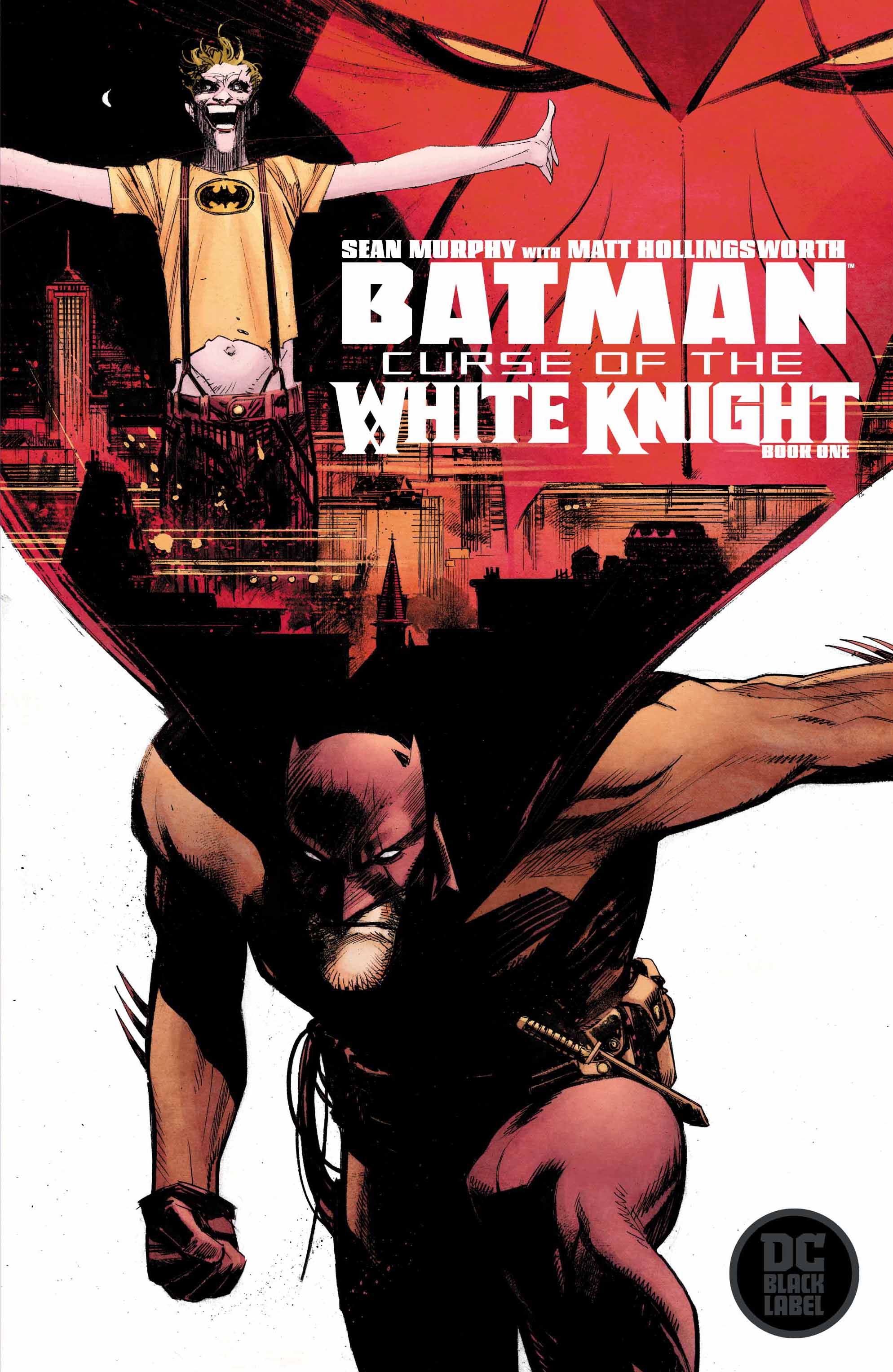 This series is the comic-book equivalent of “That difficult second album.” Whenever a musician or band break into the scene with an outstanding debut, the pressure is on to deliver something just as good, if not better, but with the added pressure of not just re-hashing what came before. Don’t get me wrong, Sean Gordon Murphy has been making comics for a fair while, but the original Batman: White Knight was his first work for a major publisher where he took the reigns as both writer AND artist. It was also a smash hit, has become a cult classic and a fan favorite. I’m very happy to report that Batman: Curse Of The White Knight #1 doesn’t disappoint.
Murphy succeeds in picking up seeds from his first story, whilst simultaneously weaving some new and intricate sub-plots. There’s that mysterious opening sequence, set in 17th Century Gotham City; which could depict actual events or, just as easily, be a scene from black & white movie serial. Very “The Mark Of Zorro”, methinks. Then there’s the Joker, rallying against the “sins” he believes he committed, back when Jack Napier’s personality came to the fore, erasing many of Joker’s crimes and actually doing some real good. 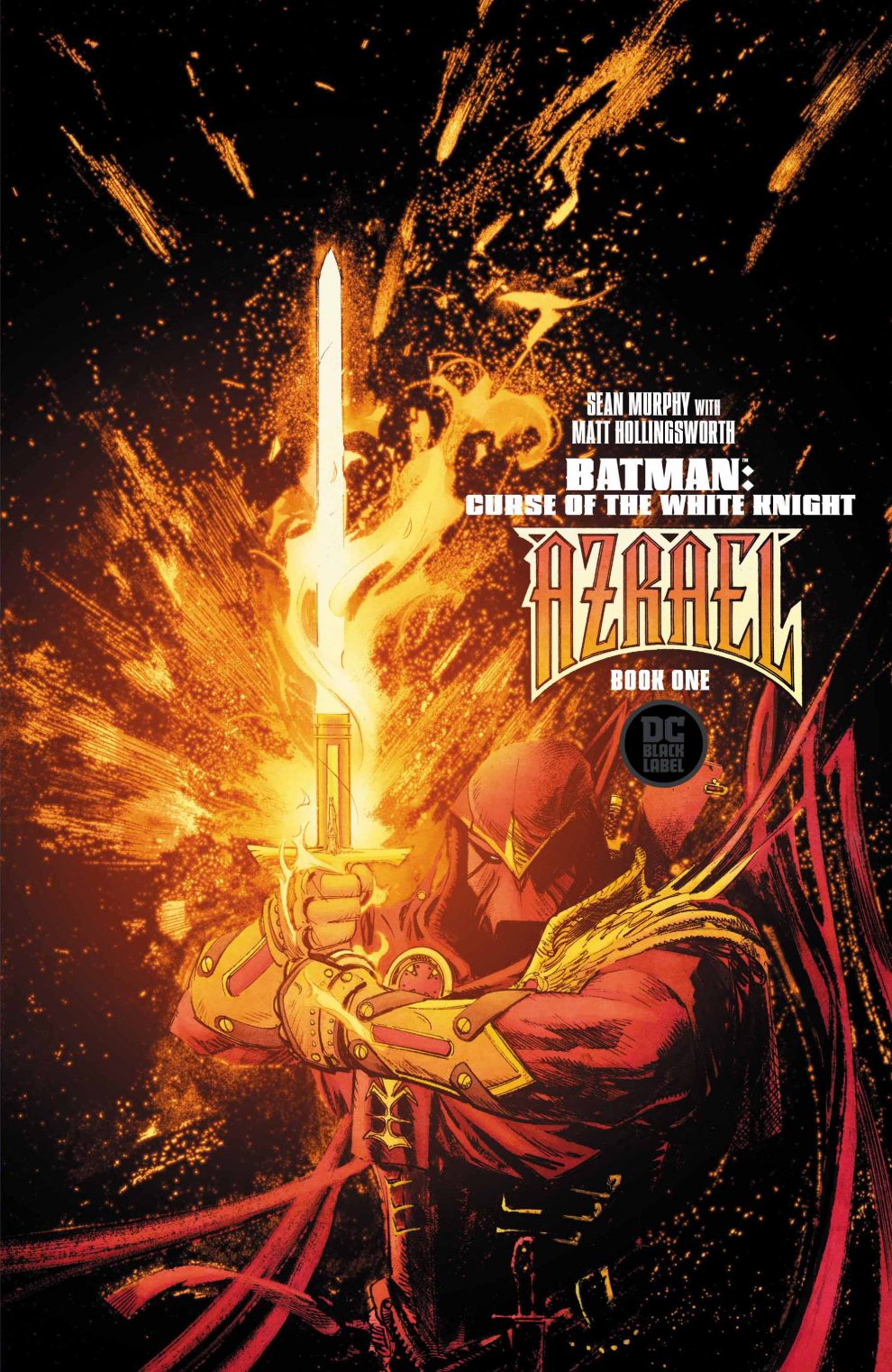 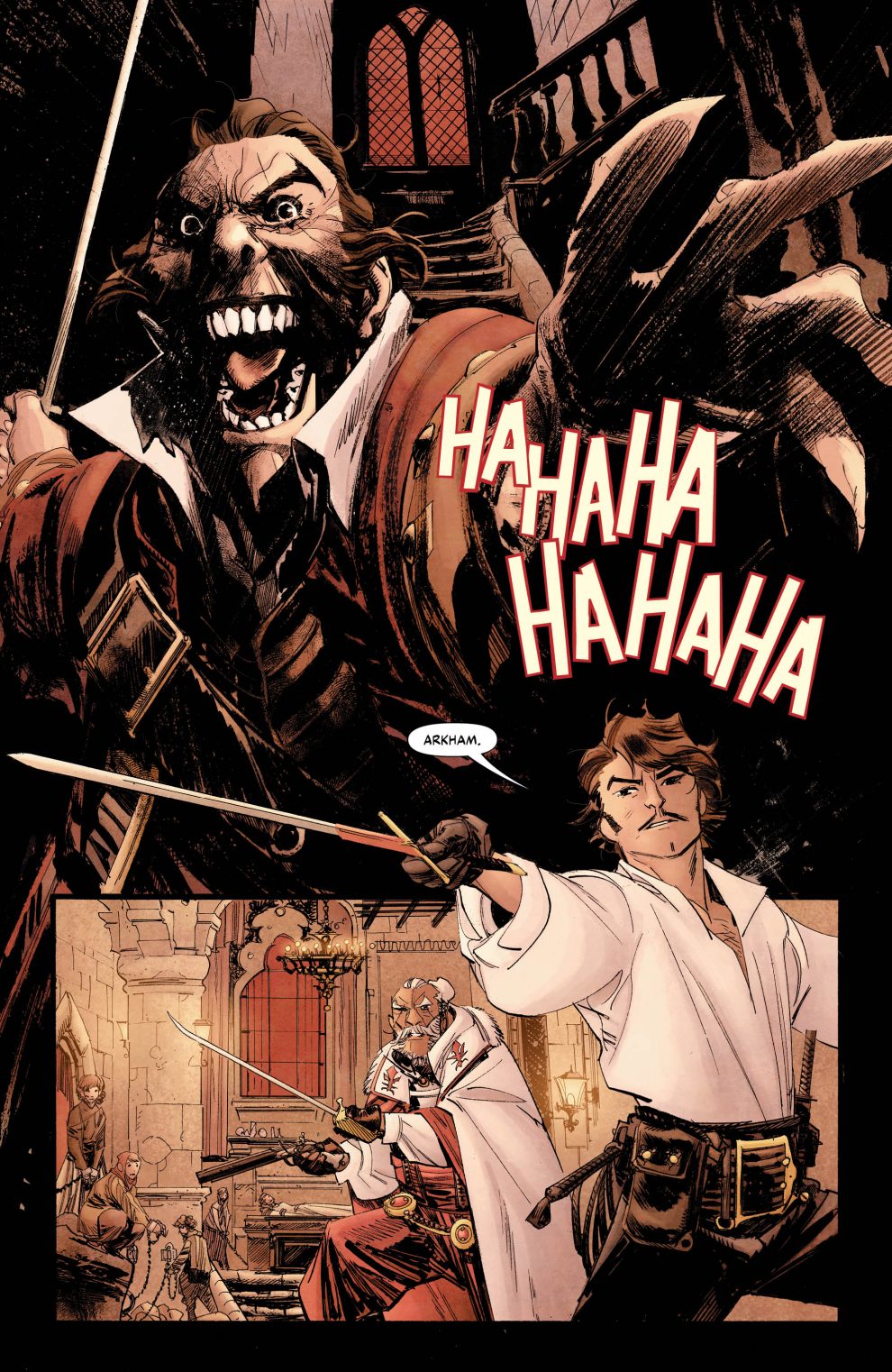 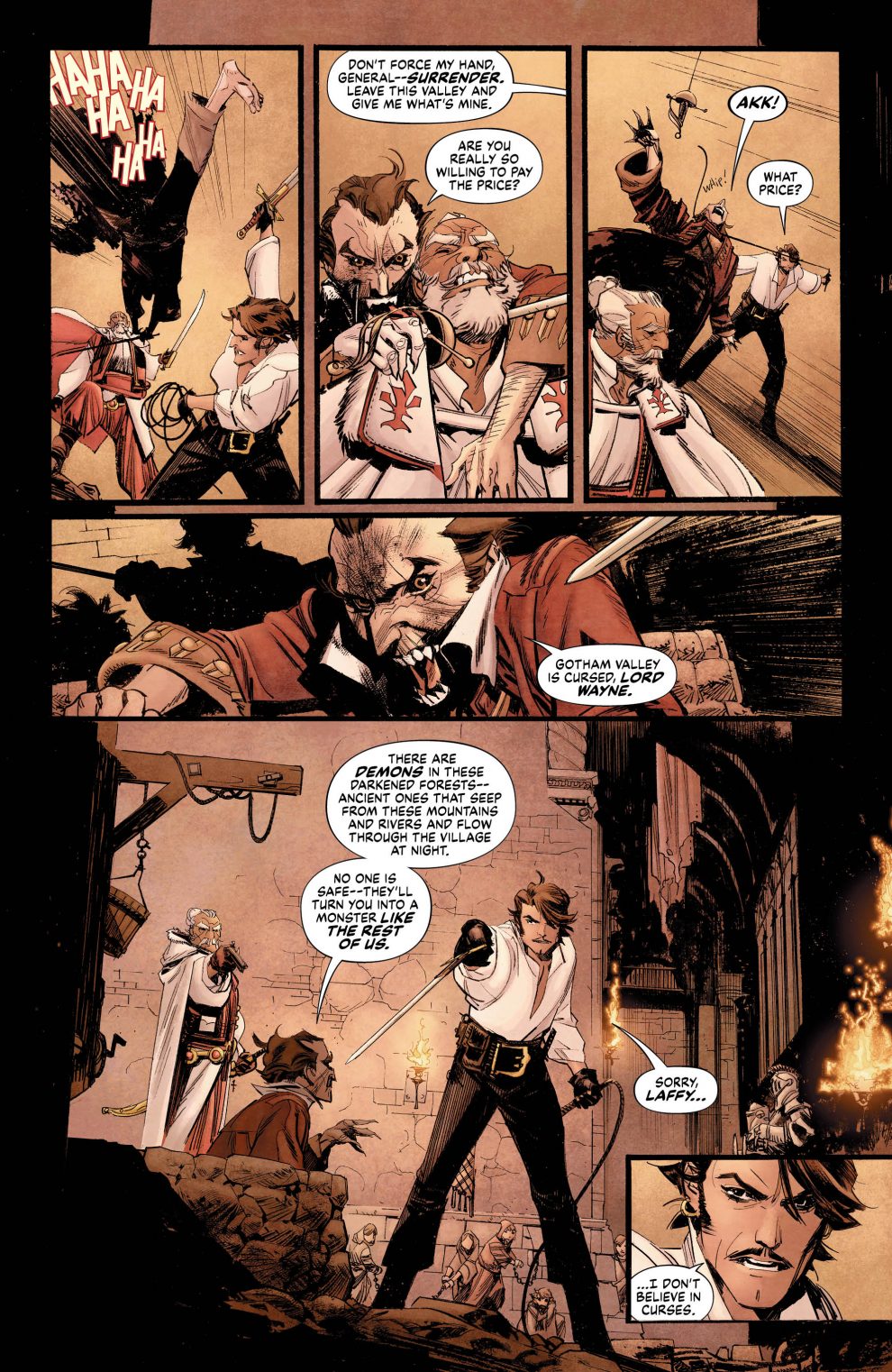 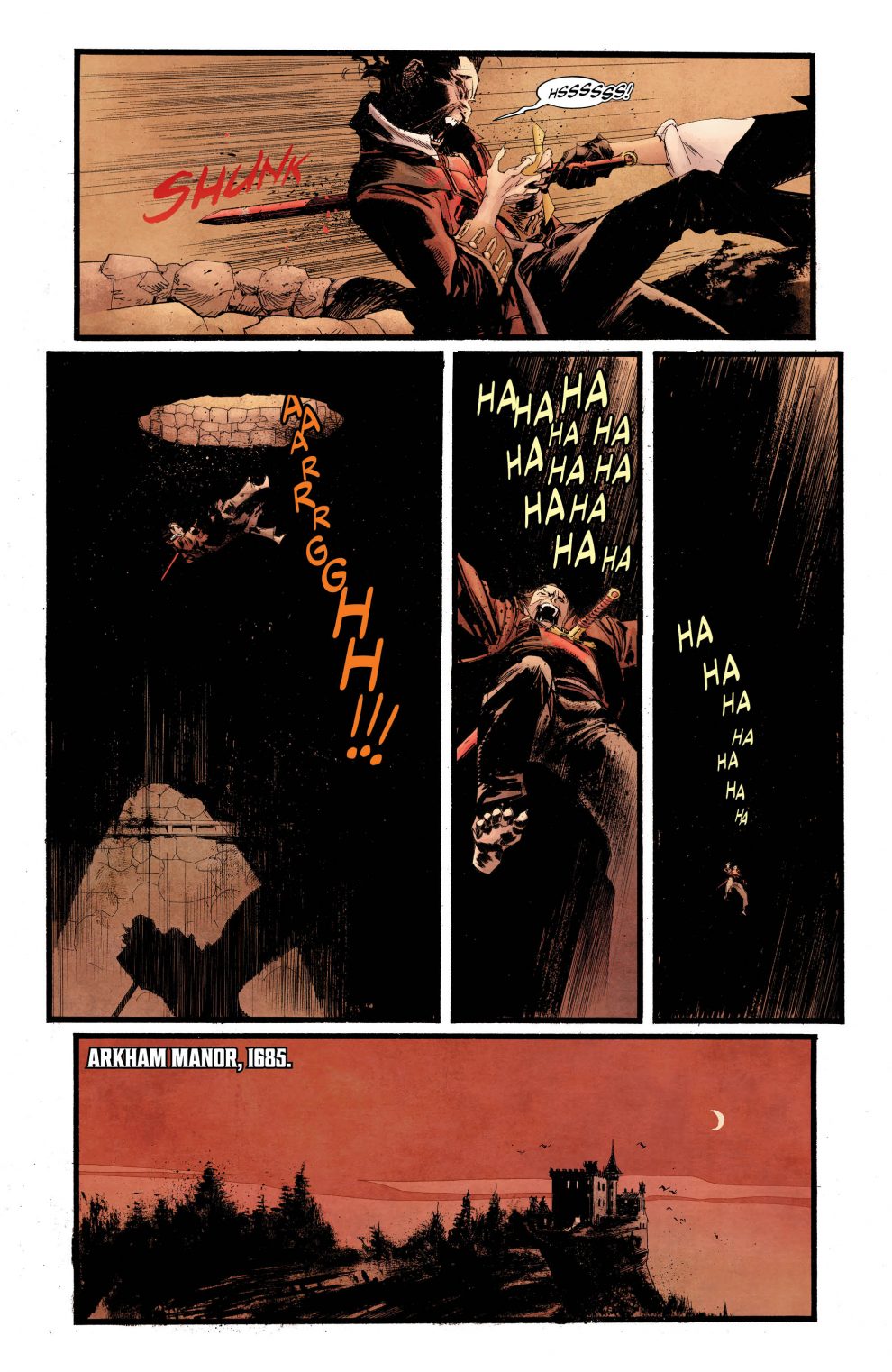 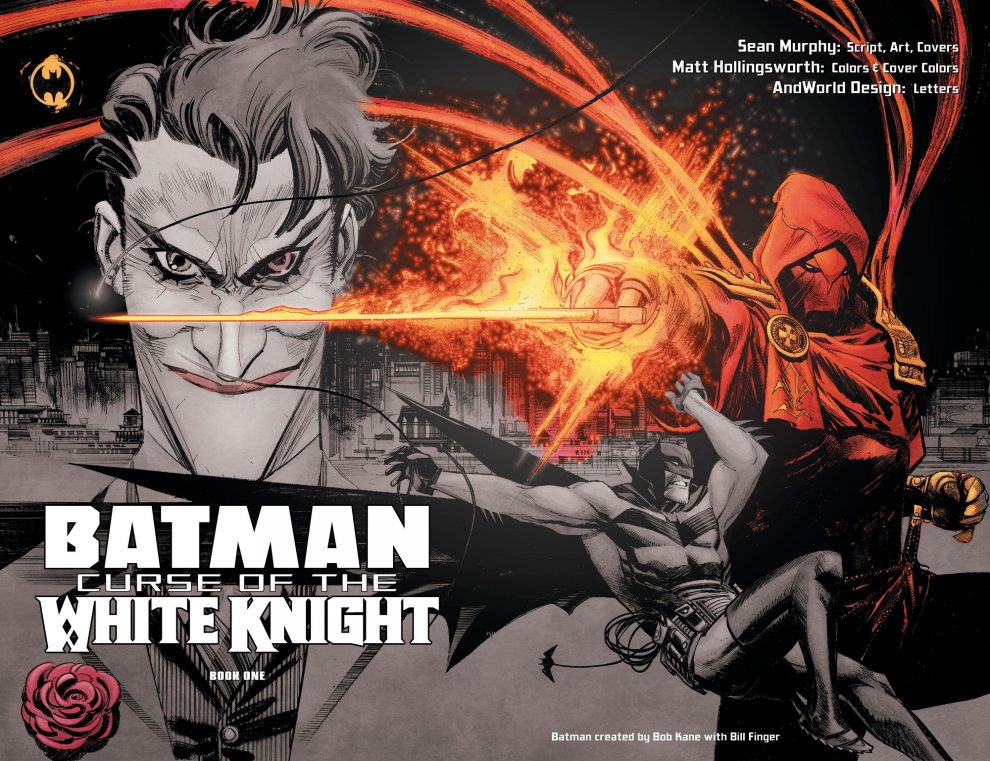 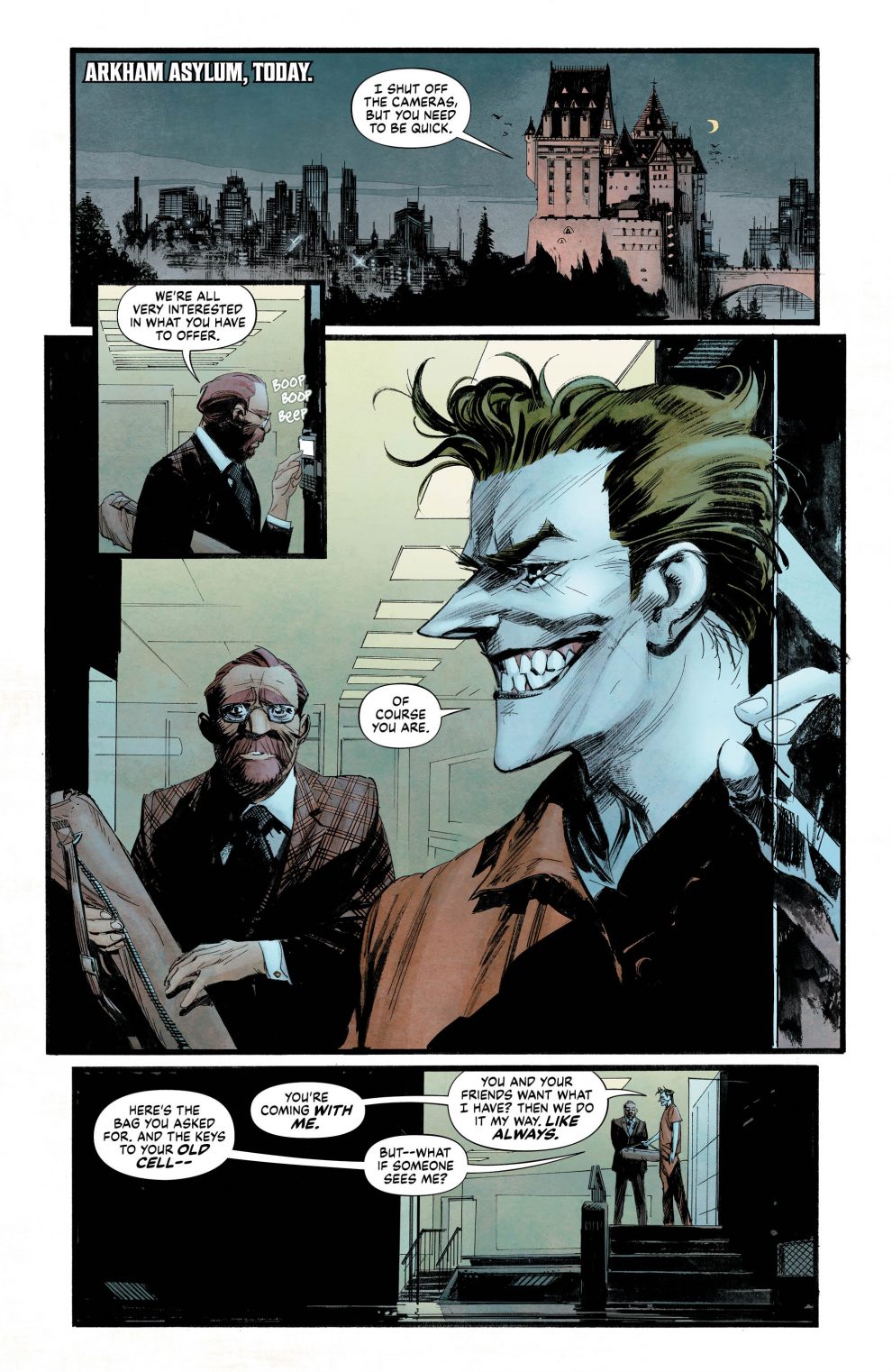 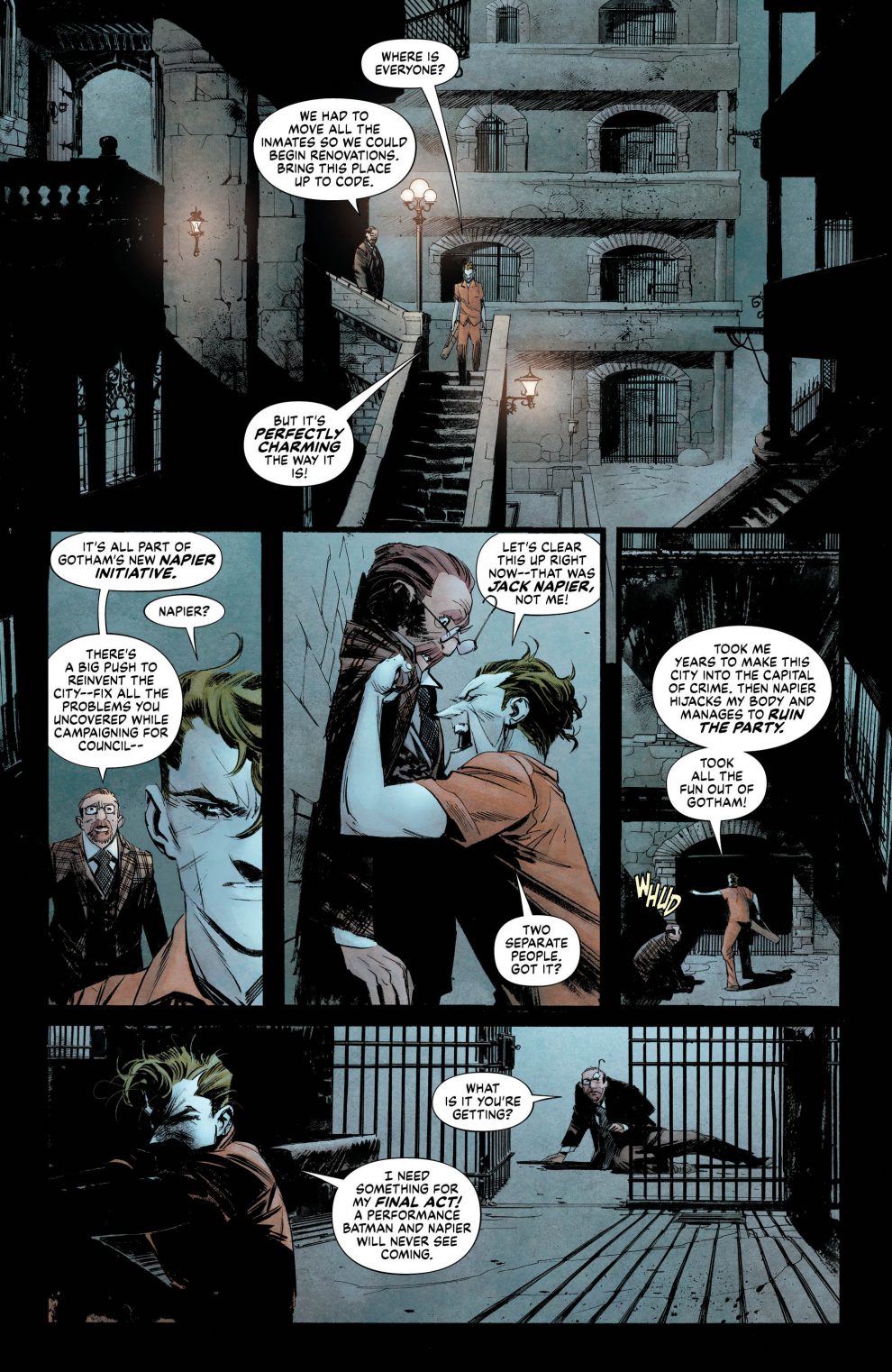 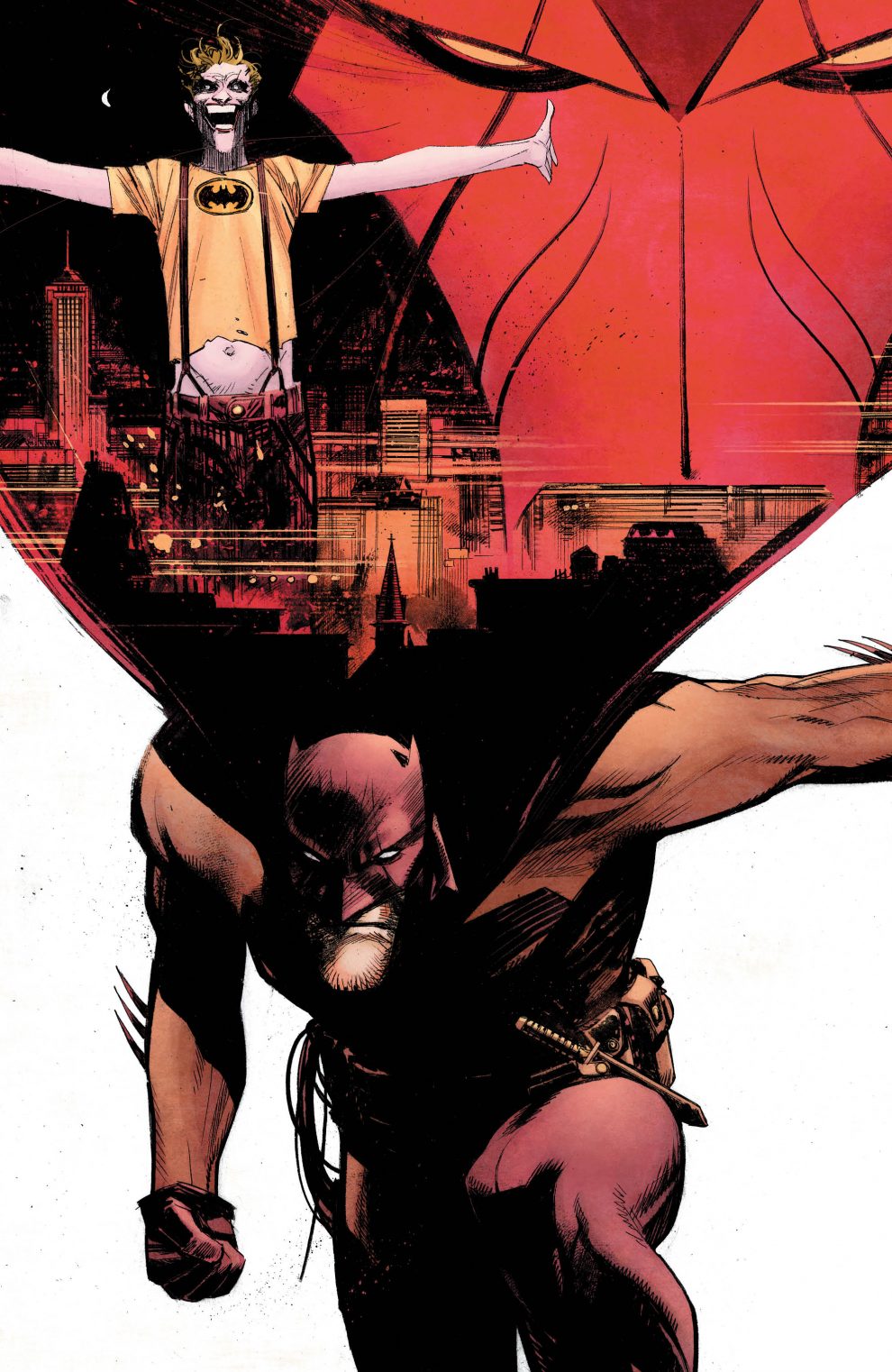 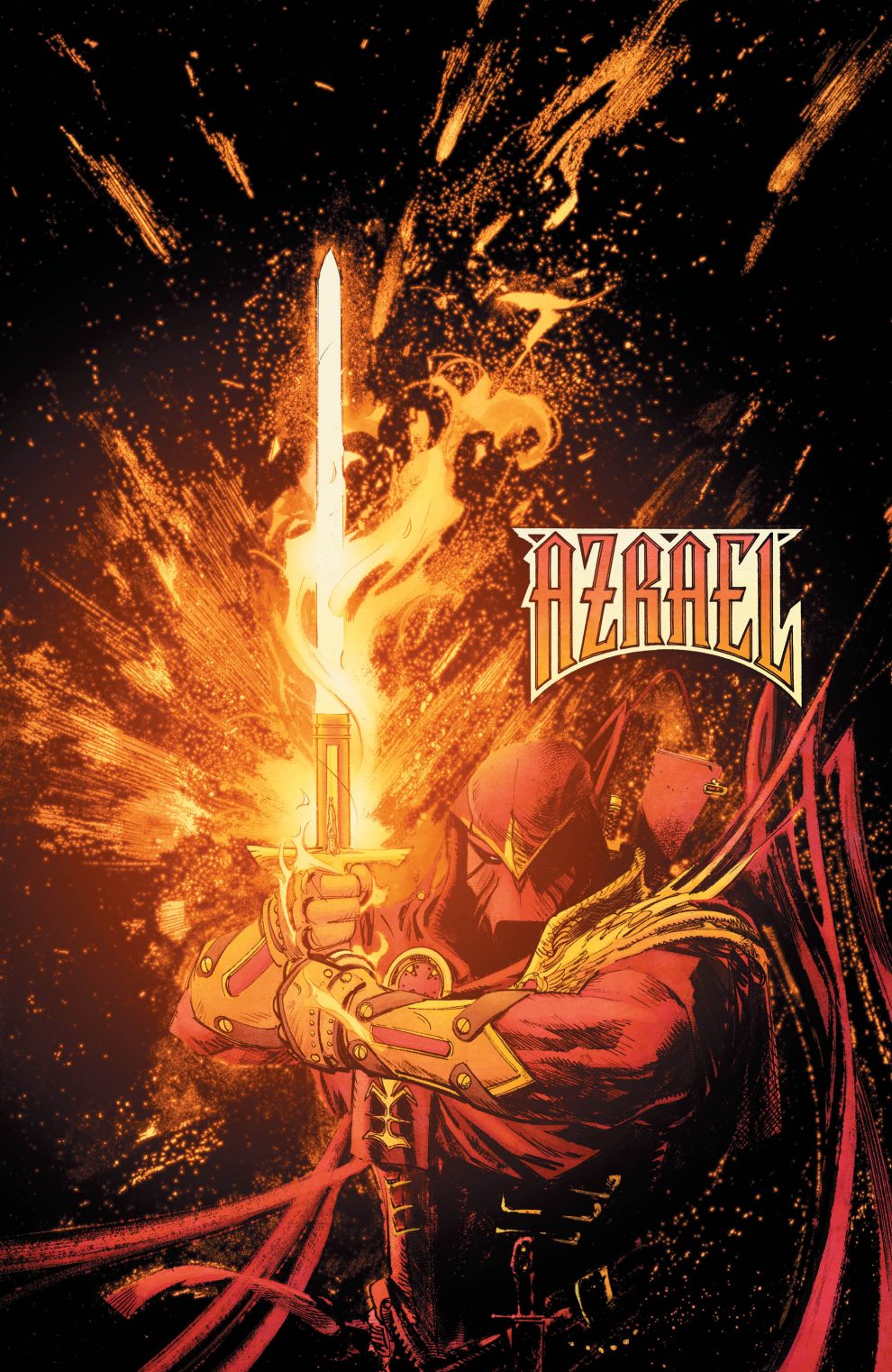 Not All Hearts And Flowers

Then we have Bruce Wayne, the Batman. We see our hero interacting with his nearest and dearest; Dick Grayson, Jim and Barbara Gordon. This is a Batman who feels that he’s failed, and it took Joker to show him just how badly. That must have been a very bitter pill to swallow. To cap the emotional mountain, we see Bruce reading a heartfelt letter from the late, lamented Alfred Pennyworth. Oh... the feelings.
Now, before you think that this issue is going to bore you, or give you a seizure due to all of the saccharin sweet emotion; let me assure you that all the action, insanity, rage and grit that we love and expect from a Batman tale, is all there too. These introspections are laying the groundwork for what’s to come, and it’s very exciting indeed.
The art is every bit as good as the writing. Once again Murphy has teamed with the brilliant Matt Hollingsworth, who takes the scratchy, earthy and atmospheric line-art and adds subtle, nuanced color, giving the book a tone which feels bizarrely realistic, yet ethereal and fairytale-like, all at the same time. AndWorld design’s sublime lettering (that letter from Alfred… wow) is the (insert favorite topping of your choice here) on a delicious, deep pan-pizza of a comic-book.

As opening chapters go, Batman: Curse Of The White Knight #1 is a darned strong one. There are classic Batman and Joker moments, some deep – yet necessary – emotional scenes, great dialogue and terrific art. The version of Jean-Paul Valley/Azrael that's introduced here feels like the vintage Azrael, and like a brand-new iteration of the character at the same time.

I can’t believe that Mr. Valley has been around for 27 years! I’m so old… but comics as good as this one make me feel young again.