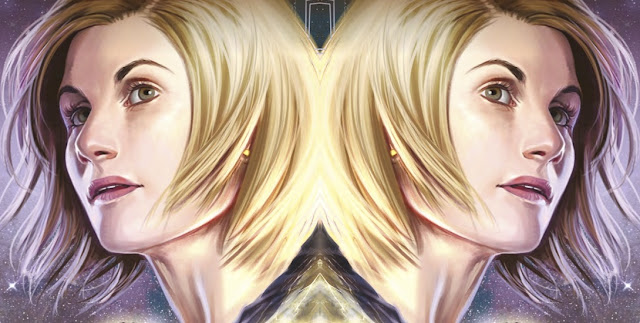 “Hidden Human History.” When the TARDIS arrives in 16th-century Europe, the Doctor and her companions find themselves caught up in a war between the Dutch… and “demons!” Hunted by bloodthirsty aliens, feared by superstitious locals, and entirely out of jelly babies, one question stands out above all the rest: why is the Doctor jealous of a podcast?

I’m no Time Lord, but I’ve had a considerable nerd culture life-span, and most of it has involved being a fan of Doctor Who. As a Brit, and growing up in the character’s native stomping grounds, is a big help. My earliest TV memories involve giant, glowing, radioactive maggots, giant spiders, an adorable journalist, and a mysterious white haired hero… who suddenly transformed into a mop-topped, wild-eyed, bohemian at the moment of death… you can see why I was hooked from the start!

The character, the stories and the whole feel of the show is swimming in quintessential British eccentricity, that’s one of the joys of Doctor Who. Jody Houser has captured all of this impeccably… this lady is an incredible writer! When I heard that she’d been named as the author of the ongoing adventures of the 13th Doctor I literally jumped for joy. I’ve followed Ms. Houser’s work over on DC Comics (you’ve heard of them, right?) and have always loved her brilliant, natural dialogue and her flair for deep, rich characterisation. All these things are essential ingredients of Doctor Who. She not only manages to capture the nuances of these characters’ phrasing and speech, I actually hear their voices when I’m reading the captions!
The art in this book matches the quality of the writing. First of all, let me say that I haven’t seen comics characters based on live-action actors as incredibly accurate as Rachael Stott’s since Jerry Ordway’s legendary adaptation of Batman ’89. Stott’s 13th Doctor doesn’t just look like, or move like Jodie Whittaker, she IS Jodie Whittaker! While Ms. Stott doesn’t draw the whole book, her work in this volume (and in vol. one) is pure, comics, gold.
Roberta Ingranata, while not as photo-realistic as Rachael, is also a wonderful artist. Her art is a bit more comic-booky (is that even a word?) but she also gives all her characters a life and dynamism that fits with the tone of the story perfectly.

The colors by Enrica Eren Angiolini, and her assistant Viviana Spinelli, is exceptional. These artists clearly know how to make line-art really pop. They blend the backgrounds brilliantly, and have a real talent of making nature look natural, sci-fi look stylish and making the characters really stand out.
As soon as you see that Comicraft is involved in any comic you’re reading, you know that you’re holding quality in your hands. The letters by Sarah Jacobs and John Roshell are lovingly crafted, easy to read and don’t obliterate the gorgeous artwork. What more could you ask for?

I really would have preferred if either Rachael Stott or Roberta Ingranata had drawn the whole book, but both artists’ work is of such a high standard that this is only a minor quibble.
While this volume can be picked up and read with little to no knowledge of what has gone before, the sudden appearance of two characters from vol. one could confuse brand new readers. If that then makes them go out and buy said volume, however, this may actually be a positive.

“Hidden Human History” Doctor Who – the 13th Doctor vol. 2 is a lovely, lovely book. It tells a clever, charming story which marries the now of technology and podcasts; to time travel, humanity, compassion and adventure. The art is very eye-pleasing and the writing is top drawer. Jody Houser is the perfect writer for Doctor Who, and I would love to see her tackle an actual TV episode or five in the future.
Titan Books have collected issues 5-8 of the ongoing 13th Doctor series in a beautifully packaged volume, which contains all four issues and all the variant covers too. For long-standing fans of the Doctor and her companions, this is a must buy. For anyone who wants to try something that’s not just another superhero comic, then this is essential reading.