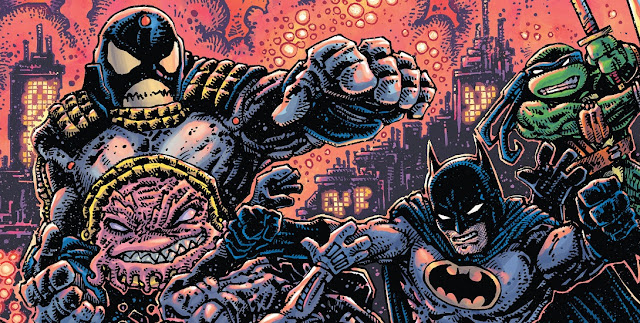 "Crisis In A Half Shell" - Part Six 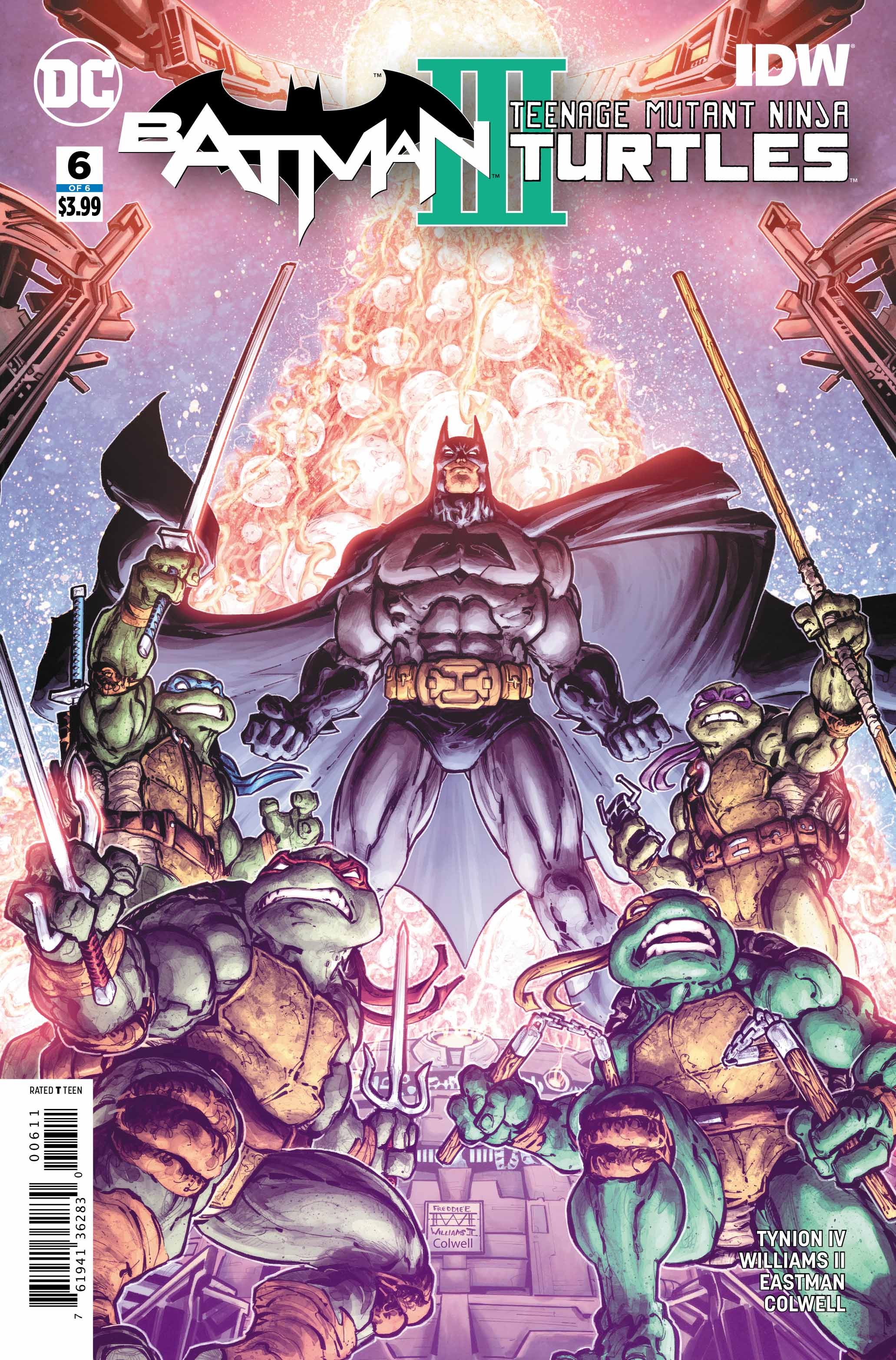 Batman/Teenage Mutant Ninja Turtles III #6 is explosive. I’m not just talking conflagrations and pyrotechnics here, I’m talking about exploding with FUN! We’ve already seen two different versions of the Turtles – modern day color and vintage monochrome too. What I wasn’t prepared for, and it really made me smile, was the appearance of the blue and grey, yellow oval Bat symbol Dark Knight of yesteryear (original Mirage Studios Turtles era).
Mr. Tynion, I salute you.
This issue was the perfect antidote to the harrowing DCeased #5. Don’t get me wrong, I LOVED that book, but I needed some emotional fizz after the heartbreak. This issue was just that. I’ve said it before, and I’ll say it again, DC Comics have real range, and books to suit all tastes. This series is the kind of read that will put a smile on anyone’s face. 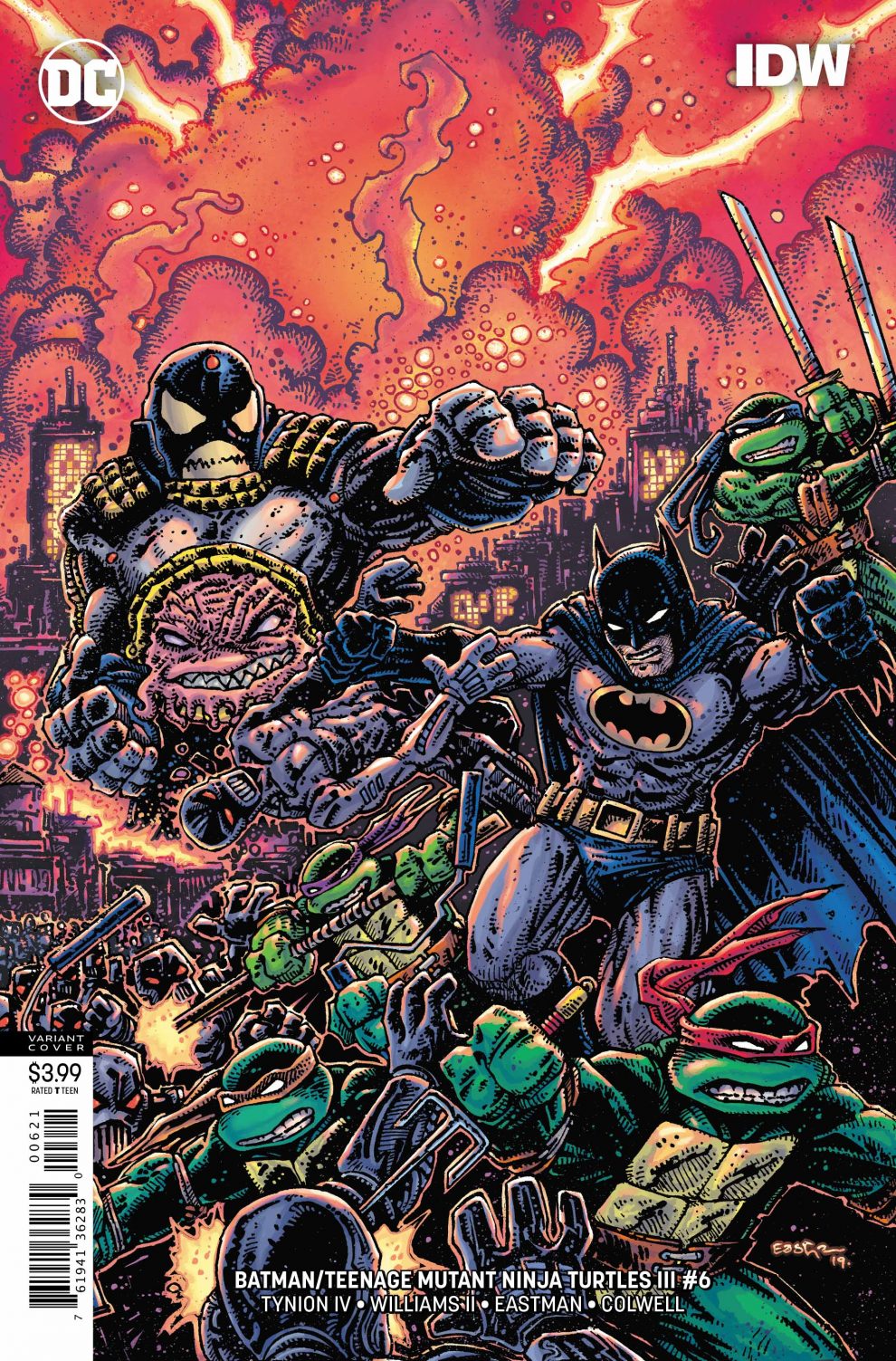 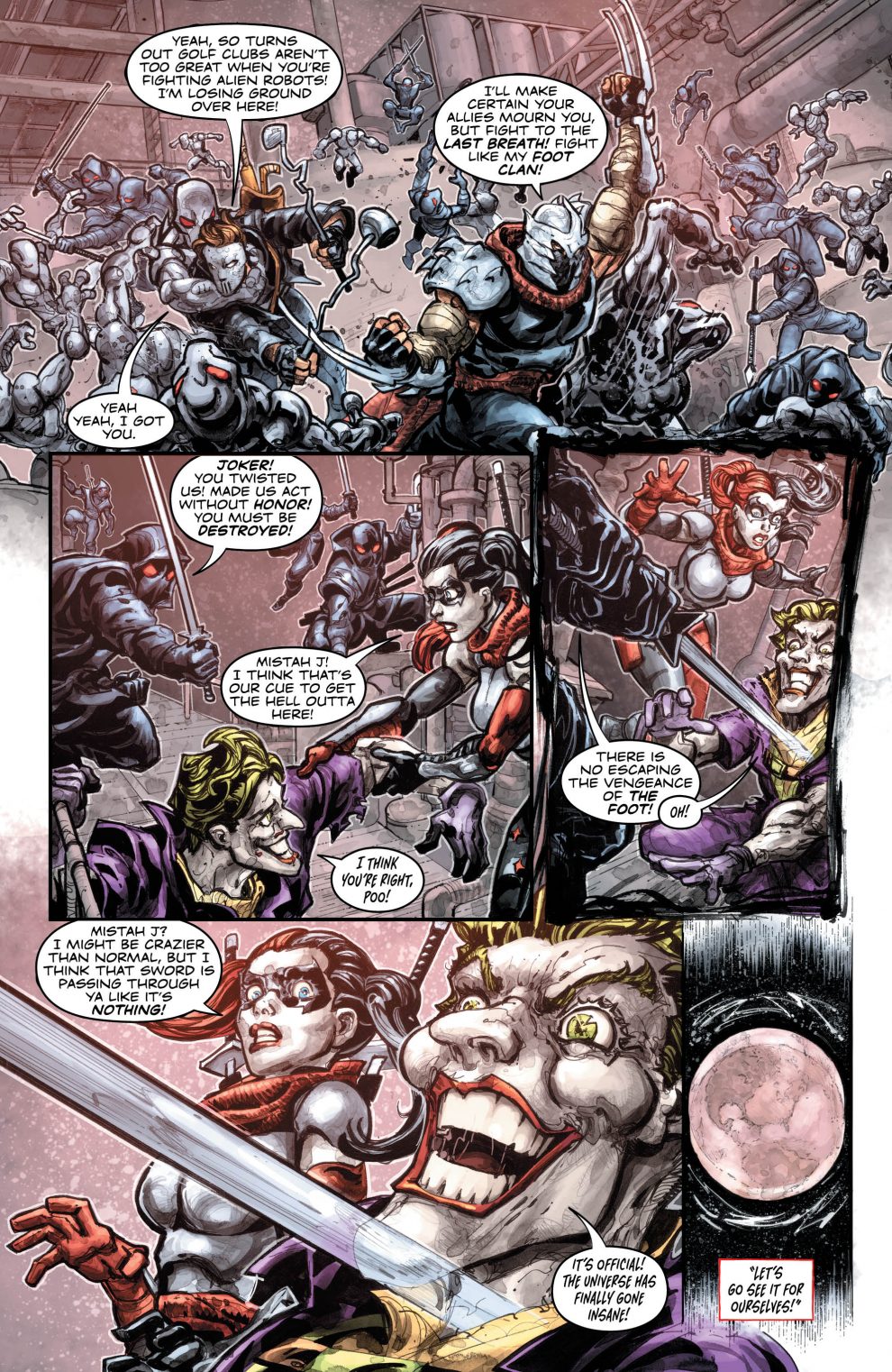 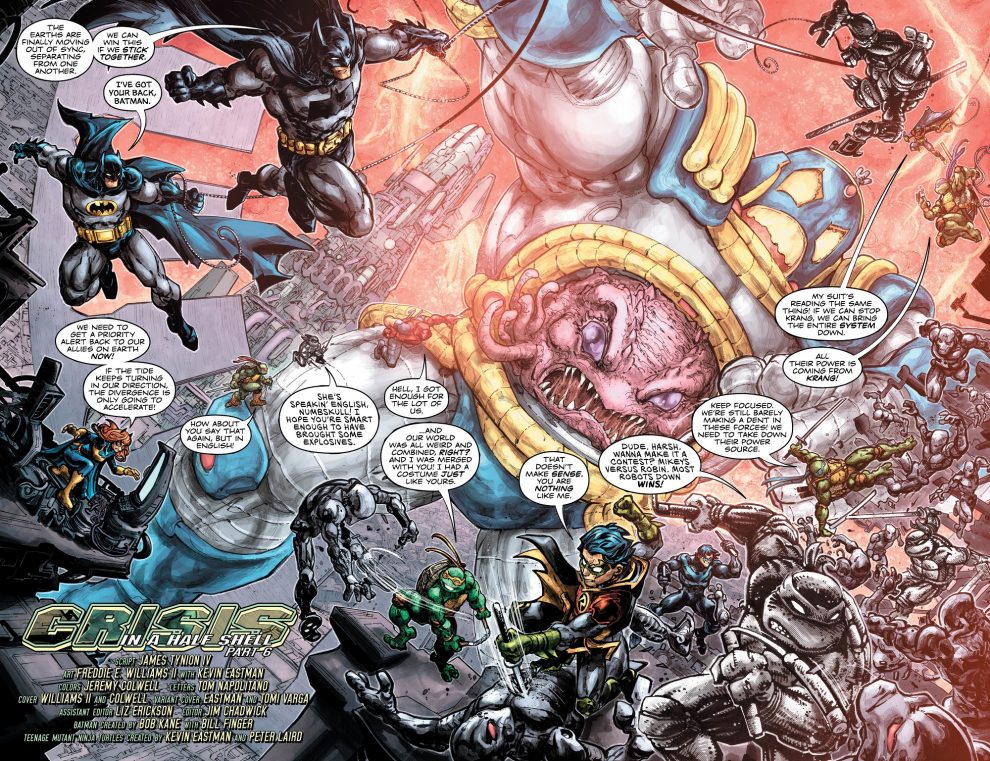 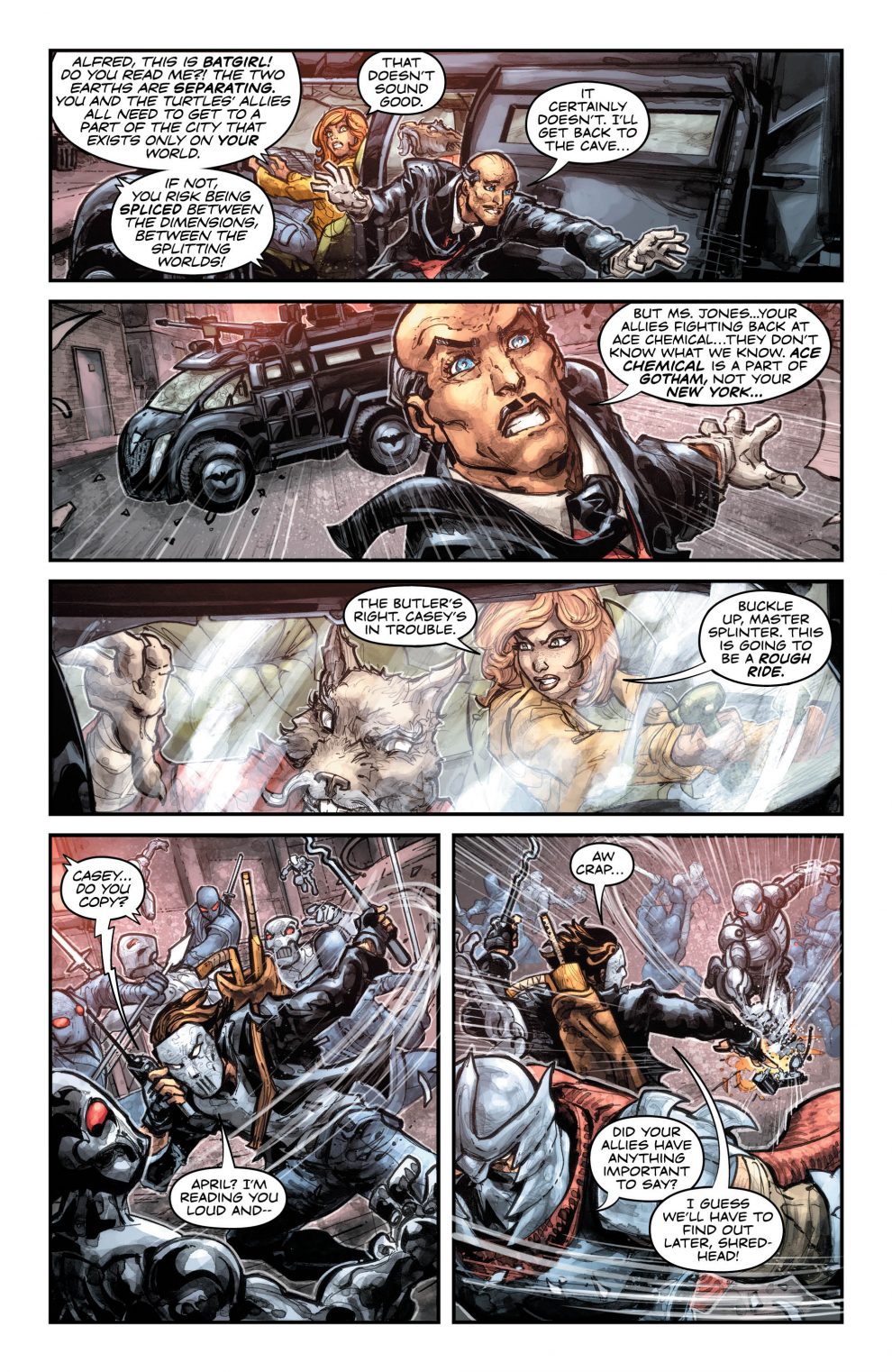 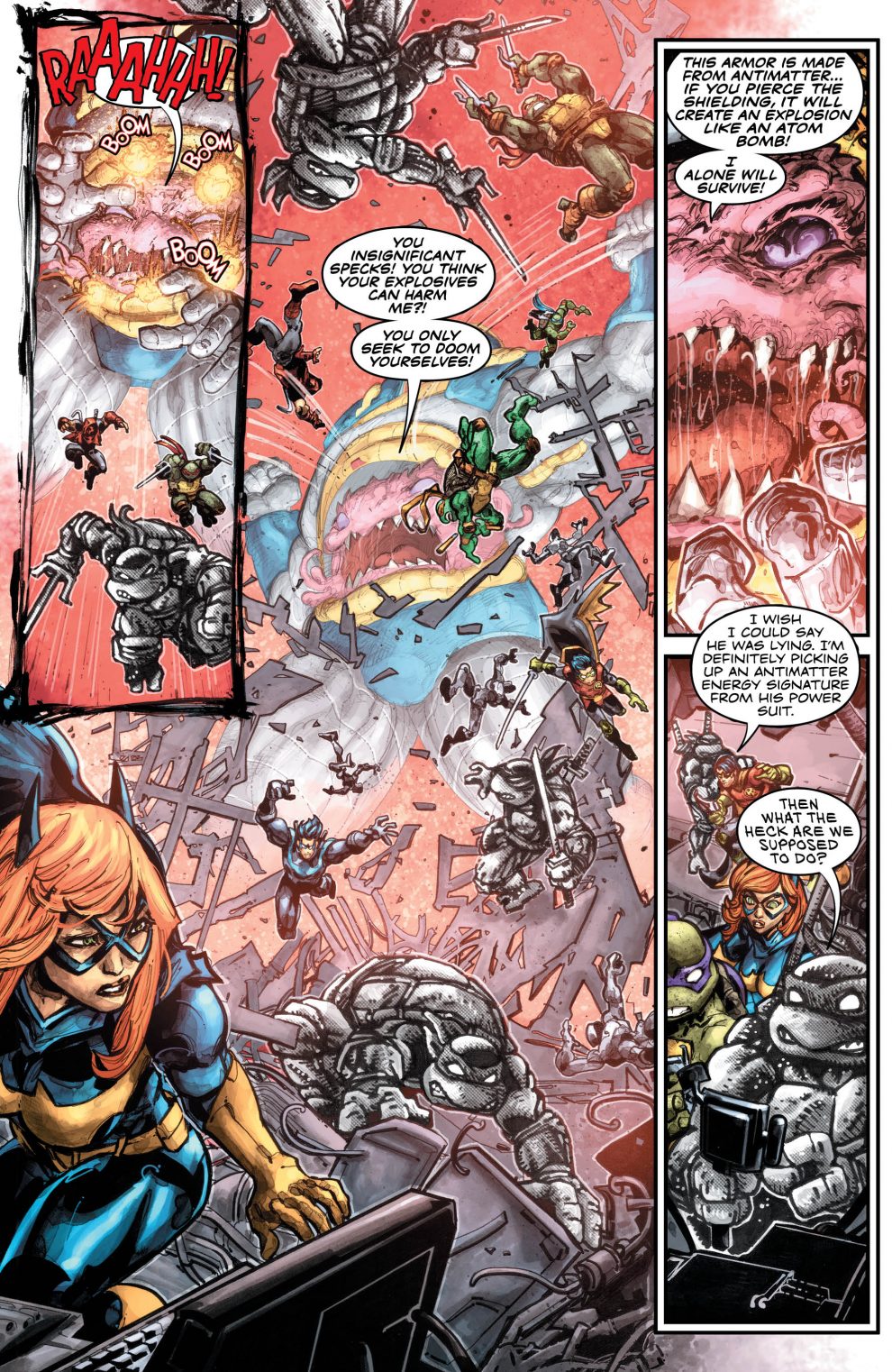 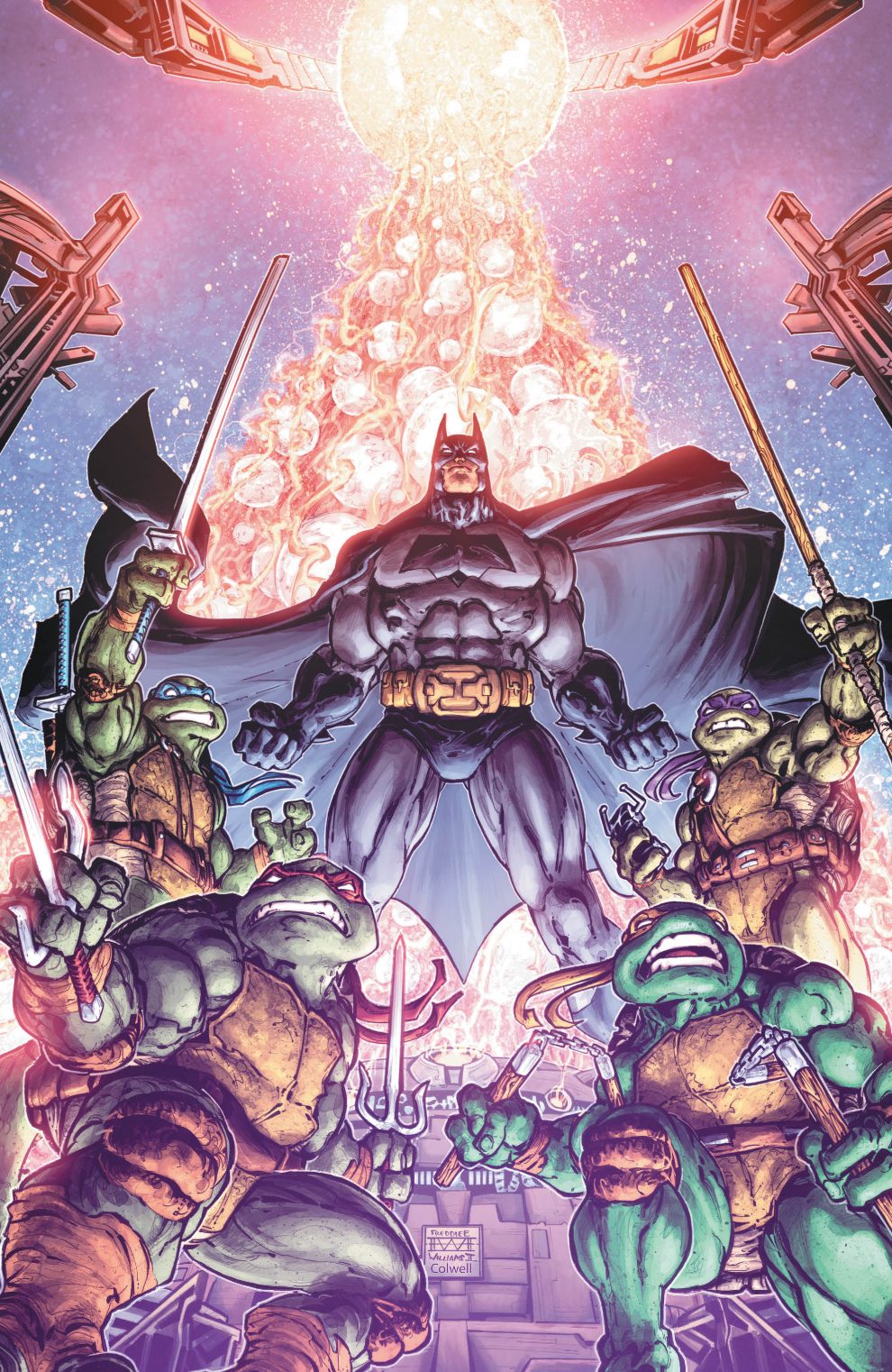 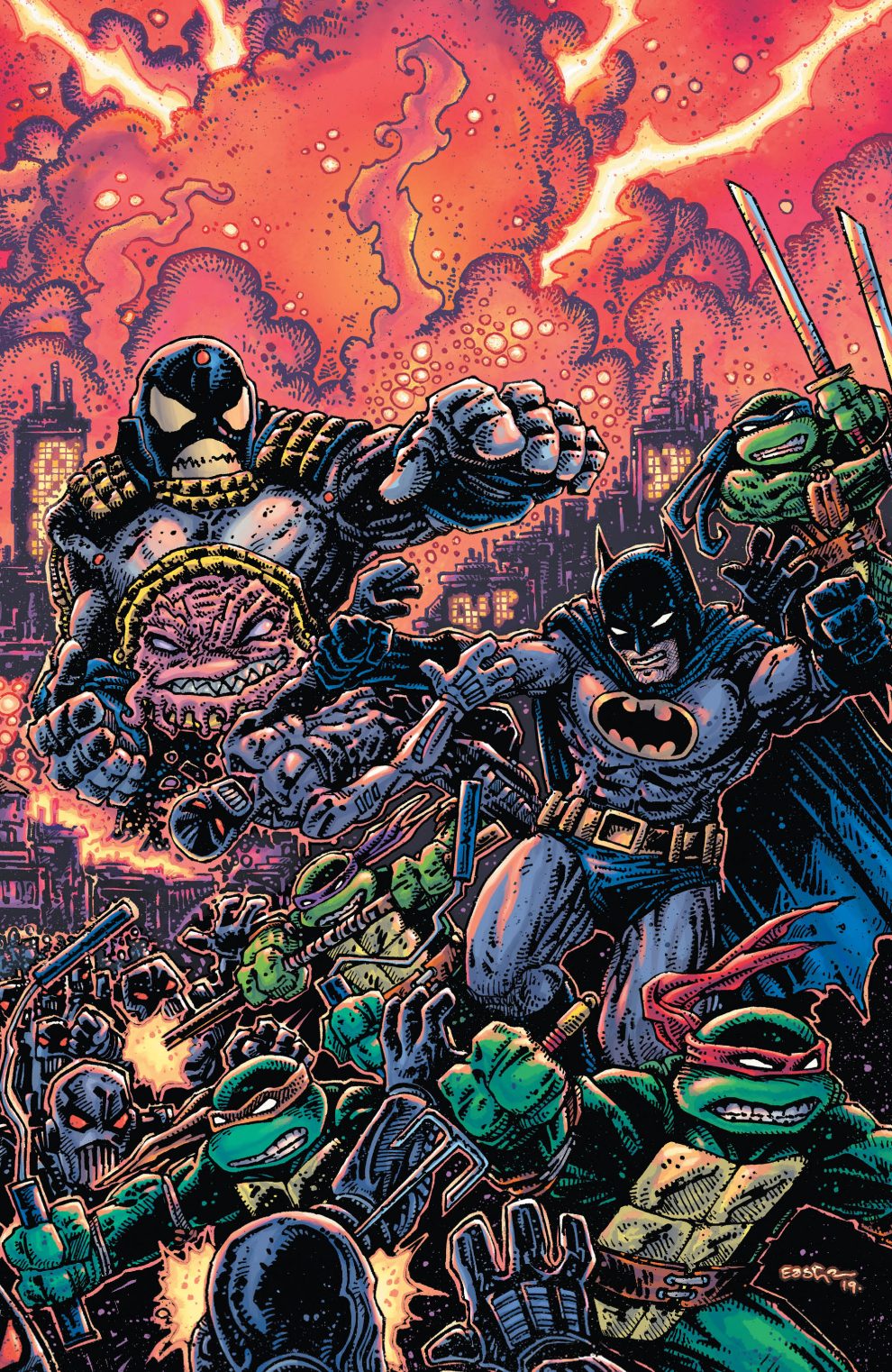 We Are Family… I’ve Got All My Turtles With Me

Freddie Williams is awesome. The way his work is sometimes inked, and sometimes (beautifully) colored by Jeremy Colwell over his pencils is just gorgeous. Sometimes the effect feels like the issues have been painted, rather than pencilled, inked and colored. Adding the monochrome mayhem of Kevin Eastman’s O.G. Turtles is an added and welcome bonus. These six issues haven’t just been a joy to read, they’ve been a pleasure to look at.
Tom Napolitano has to be credited hugely for the final look, and ultimate texture of the book. This could easily have been a Crisis On Infinite Earths companion (I’ve just re-read that classic, for the umpteenth time) and would also make a great tie-in the the Turtles tales of yore, as well as with their current IDW adventures. His lettering for the B&W heroes in a half shell has made me smile, page after page, after page.

Batman/Teenage Mutant Ninja Turtles III #6 is a fitting conclusion to this series, and to the amazing trilogy that the incredible James Tynion IV, Freddie E. Williams II, Jeremy Colwell and Tom Napolitano have gifted us with (along with the brilliant volumes I and II). Mr. Eastman provided some gorgeous covers for all three mini-series, but seeing his work on the comic-book page once again filled my heart with joy.
This title was a monthly ray of sunshine, and I eagerly await the collected edition, so I can put my single issues away and store them safely.
Cowabunga dudes and dudettes!