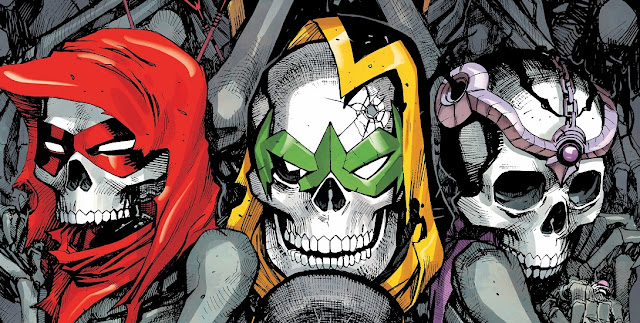 "Put Out The Light"

My mind is still reeling after the shocking events of the issue #34, and poor old Robin gets the news delivered in an even nastier way. Teen Titans #35 keeps the tension levels high and shows us just how much we really don’t know. Roundhouse was the traitor within the team’s ranks all along, and now he has the mighty Djinn in his thrall.

That Adam Glass fella sure can write. The fact that Roundhouse freed Robin’s prisoners from the underground gulag was the biggest shocker a comic has delivered in a long, long time. The way that Glass has made this character so affable, loveable and irreplaceable. in the space of a year, is testament to his skill a s a writer. I really didn’t see that coming.
Glass is cleverer still, because after this huge revelation it would’ve be safe to assume that the Other had been pulling Roundhouse’s strings from the start, but another clever twist this issue shows us that our blue-skinned friend may not be the only rotten apple in the barrel.

As always, the art team of Bernard Chang and Marcelo Maiolo provide visuals that more than match the quality of the script. I still can’t get the final page of issue #34 out of my head, and seeing the way that these fine artists display character emotions, and that brilliant montage of Roundhouse’s origin, are all a joy to look at in this chapter. This book is always right at the top of my pull-list and never ceases to surprise and delight.
And shock, and horrify… and tear my heart out.
This entire creative team, including the Captain of Comics Calligraphy, Mr. Rob Leigh, is one that I will follow forever. This series gave me my first experience of Adam Glass’ writing, but I’ve followed Bernard Chang and Marcelo Maiolo from their New 52 run on Batman Beyond, through the DC Rebirth and into these pages. Rob Leigh seems to actually following me wherever I go, as he letters many of the titles that I’m fortunate to have been assigned to review. I can happily live with that, as Rob is cool… be like Rob.

I frickin’ love this series… what more can I say? Teen Titans #35 isn’t just another great issue in this brilliant run, it’s also another solid chapter in the “Year Of The Villain” arc. Unlike other DC books (which I won’t name, as that’s another reviewer’s job) this title can be enjoyed as part of the meta narrative, but also works great at just telling the story of this terrific team of Teen heroes.
I’ve been hooked for a while now, and that final cliffhanger is helping me remain hooked.