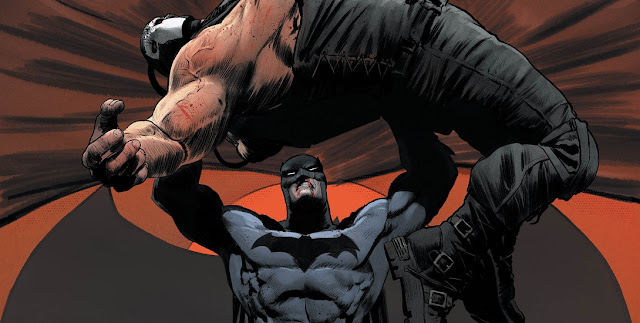 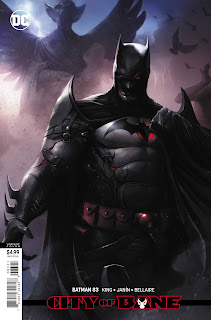 Unbridled rage, sorrow, guilt and confusion. These are just some of the gamut of emotions run by the Dark Knight in this emotionally charged issue. Before reading on, it's imperative that anybody looking at this review be familiar with recent events in Tom King's long running Bat-saga.

The demise of such a beloved and perennial figure in the Batman universe has been confirmed within these pages. What we all hoped was some kind of ruse on the part of Bane would appear to be genuine cold-blooded murder. Whilst the old adage that "nobody stays dead in comics" can always be used as a fallback, it does appear that one Alfred Pennyworth, for now at least, is gone.

The enormity of such a decision cannot be taken lightly at all and is sure to be very divisive amongst the fan-base. To do away with such an integral character is extremely shocking and has certainly caused a major stir. The lasting impact on not only Batman, but the wider DC universe is going to be very intriguing to see. As Bruce loses his anchor and the man that effectively raised him and kept him sane ever since that fateful night in Crime Alley, his role within that universe may alter due to his mental state.

As the issue is largely devoid of dialogue, the wonderful imagery of Mikel Janin is framed by a monologue from Alfred himself, as he recounts various points from his life serving Bruce. This works very well and is a clever choice from King, as it puts a lot more emphasis on the visuals. Janin comes up with some striking and heart wrenching panels. The sheer shock and horror on the face of Batman as he discovers Alfred's fate is incredibly vivid and says more than a thousand words ever could.

Whilst Janin can always be relied on to produce a Batman figure that is bold and heroic, looking jacked up to the nines, here he expertly crafts a Dark Knight that is utterly crestfallen, lost and unable to accept the horror of the situation. Truly a hats off moment to the artist here, it's work that would bring tears even to a glass eye.

With an ending to the issue that sets the table for a huge amount of conflict to come, as the two generations of Wayne men come together for a battle for the ages, the emotional stakes are raised even higher. Thomas Wayne has proven himself to be every bit the master tactician his son is, so it's a safe bet that he'll have all his bases covered, ready for what's to come. Whilst the two are about to go mano a mano, you can bet your bottom dollar that there are far bigger things afoot...

Read this issue then dry your eyes. Reflect on the end of an era (for now) and take a breather. I think we're all going to need it. Batman #83 is one of Tom King's most striking and evocative issues, and truly a hammer blow to the heart of the Dark Knight. This is a real tipping point in King's legacy on the title.

How it all plays out remains to be seen, but there's no question that this move, if nothing else, is very daring indeed. With the next issue set to explore " The Secret History of Thomas Wayne", more answers are coming very soon.

Roll on issue #84 of this, quite remarkable series.