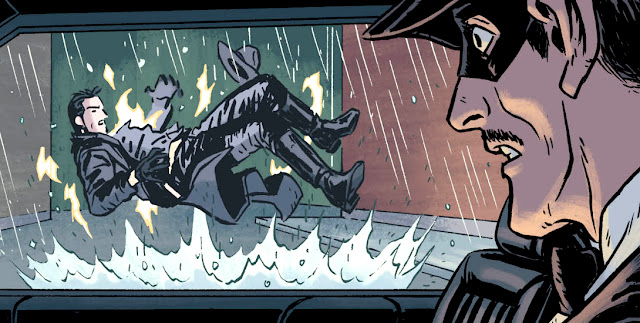 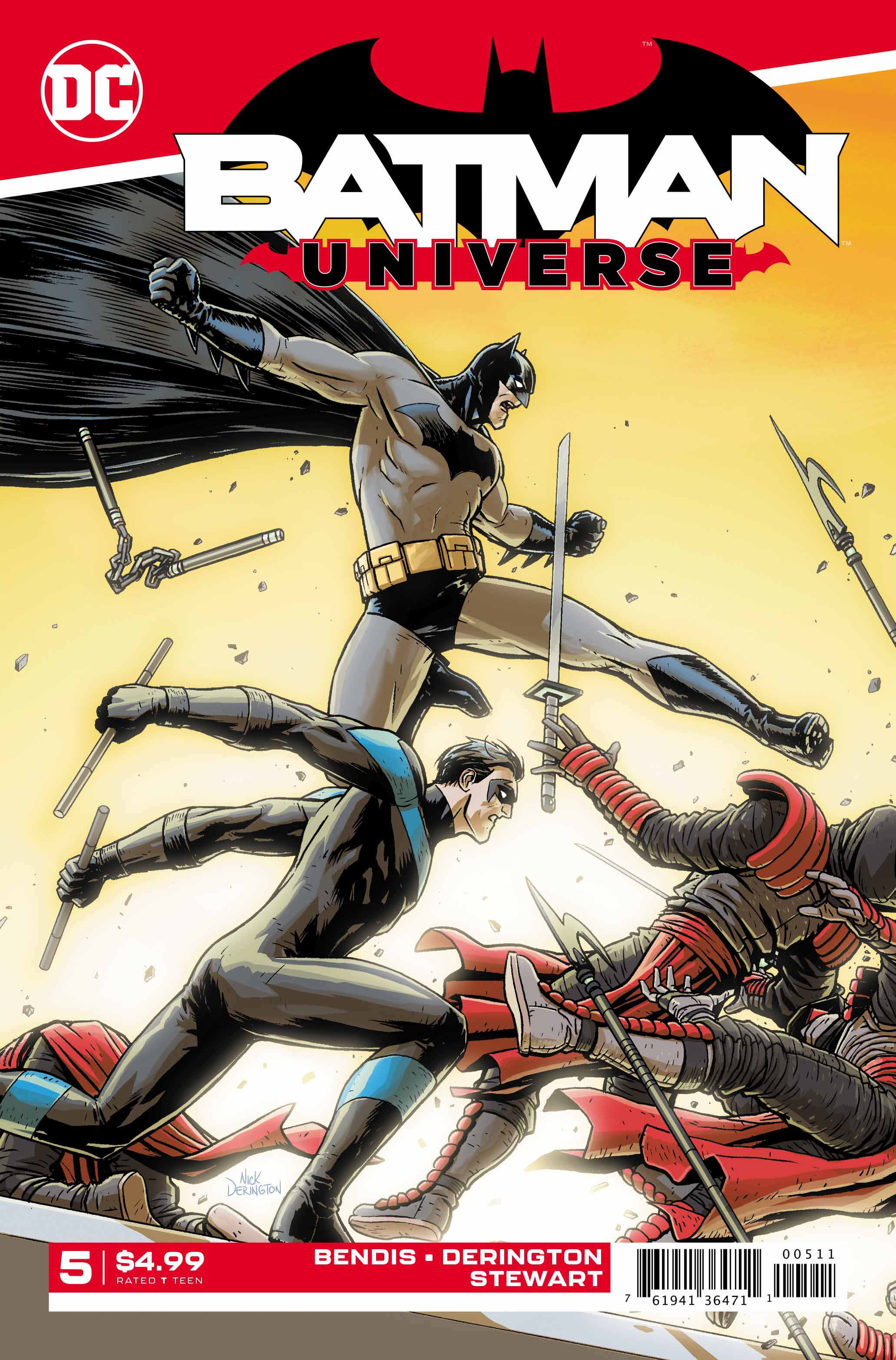 Batman Universe #5 is so full of awesomeness that my brain (what there is left of it) almost went into meltdown. I knew that something special was coming as soon as I saw Nightwing on the cover… and boy was I right. It’s the original Dynamic Duo, baby!
The end of issue #4 saw the Dark Knight gunned down in Crime Alley by Vandal Savage, without his armored Bat-suit to protect him. Talk about cliffhanger! As always, Brian Bendis had an escape clause up his sleeve, which ties into the whole ongoing plot. I should’ve known that Batman wouldn’t die less than halfway through his own mini-series! Of course our hero survives, but that’s just one of several punch the air with joy moments that this issue is overflowing with.
The writing in this series is thoughtful, clever, and downright hilarious. The relationship between Batman and Nightwing is absolute perfection. The way they talk and act reminds me of my son and I; they’re like a parent and child that are also best friends… it’s magic. When you throw in Alfred’s wit and wisdom (after not quite receiving a heartbreaking farewell from a “dying” Bruce Wayne), and the revelation of one Mr Pennyworth’s greatest fears, the end result is a sequence of unparalleled belly laughs. Then we get the confirmation from Dick that Bat-family newsletters are actually a thing… people around me stared in wonder, as I was laughing out loud on a standing-room only commuter train whilst reading this story. 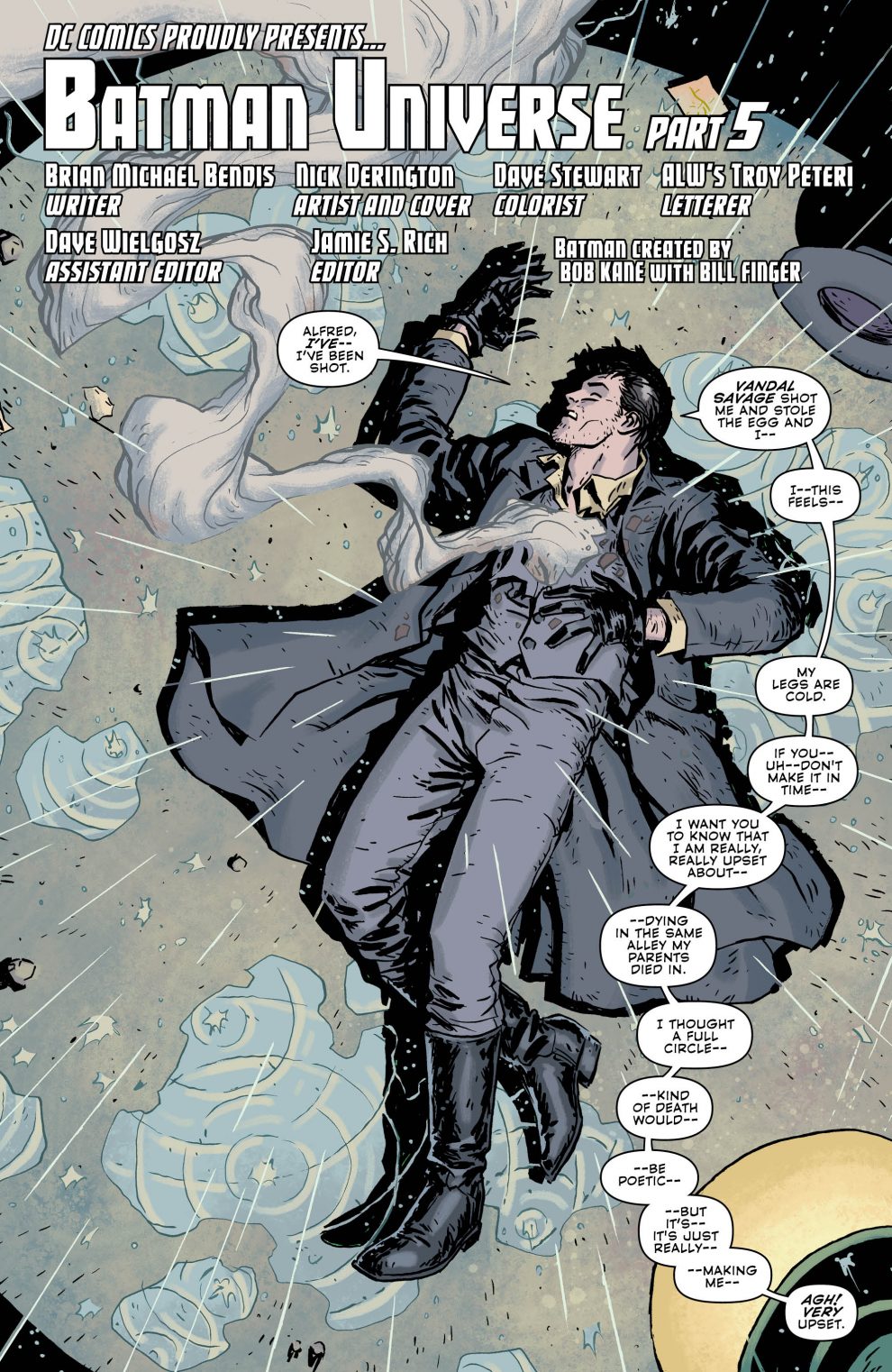 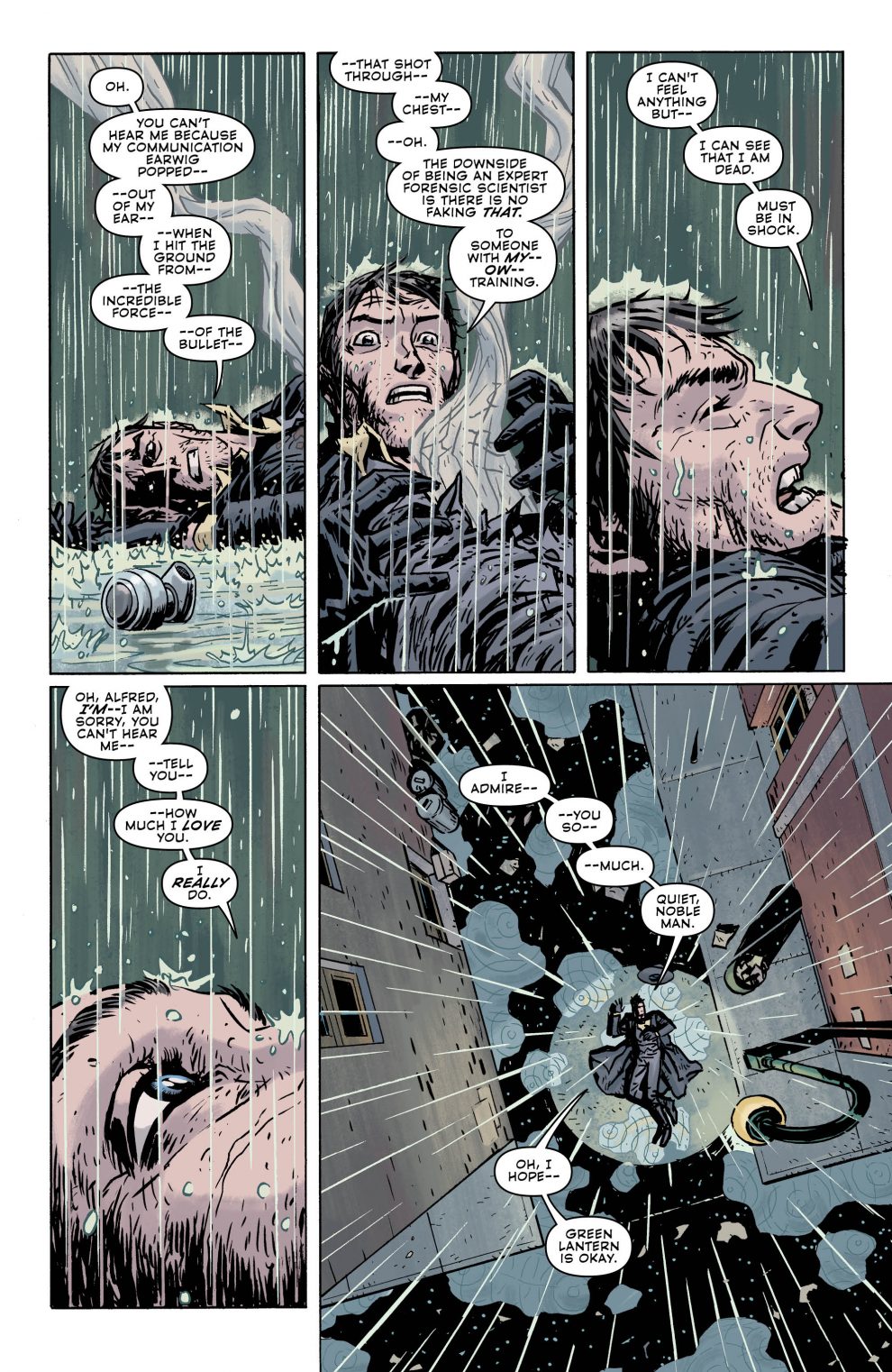 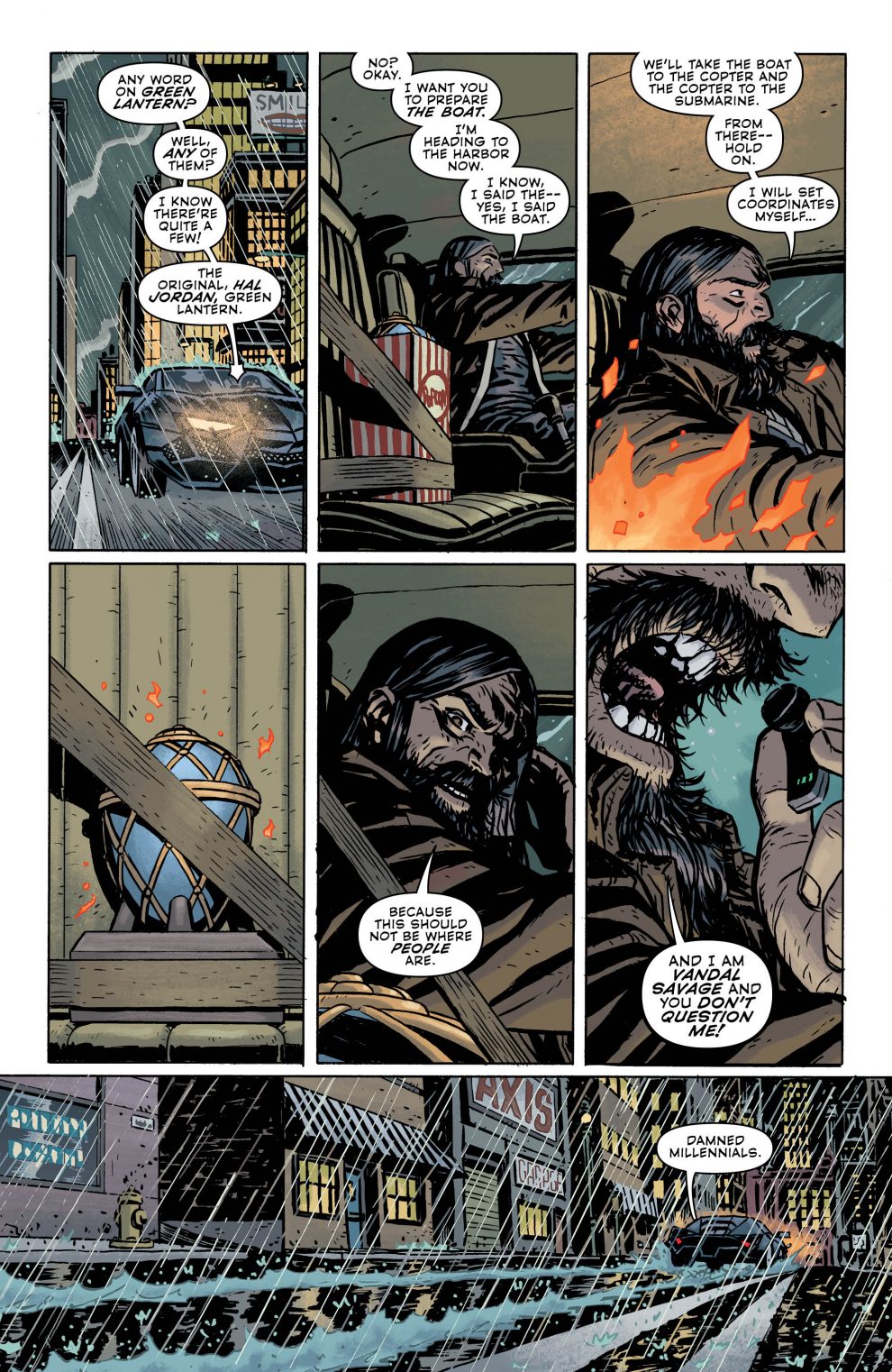 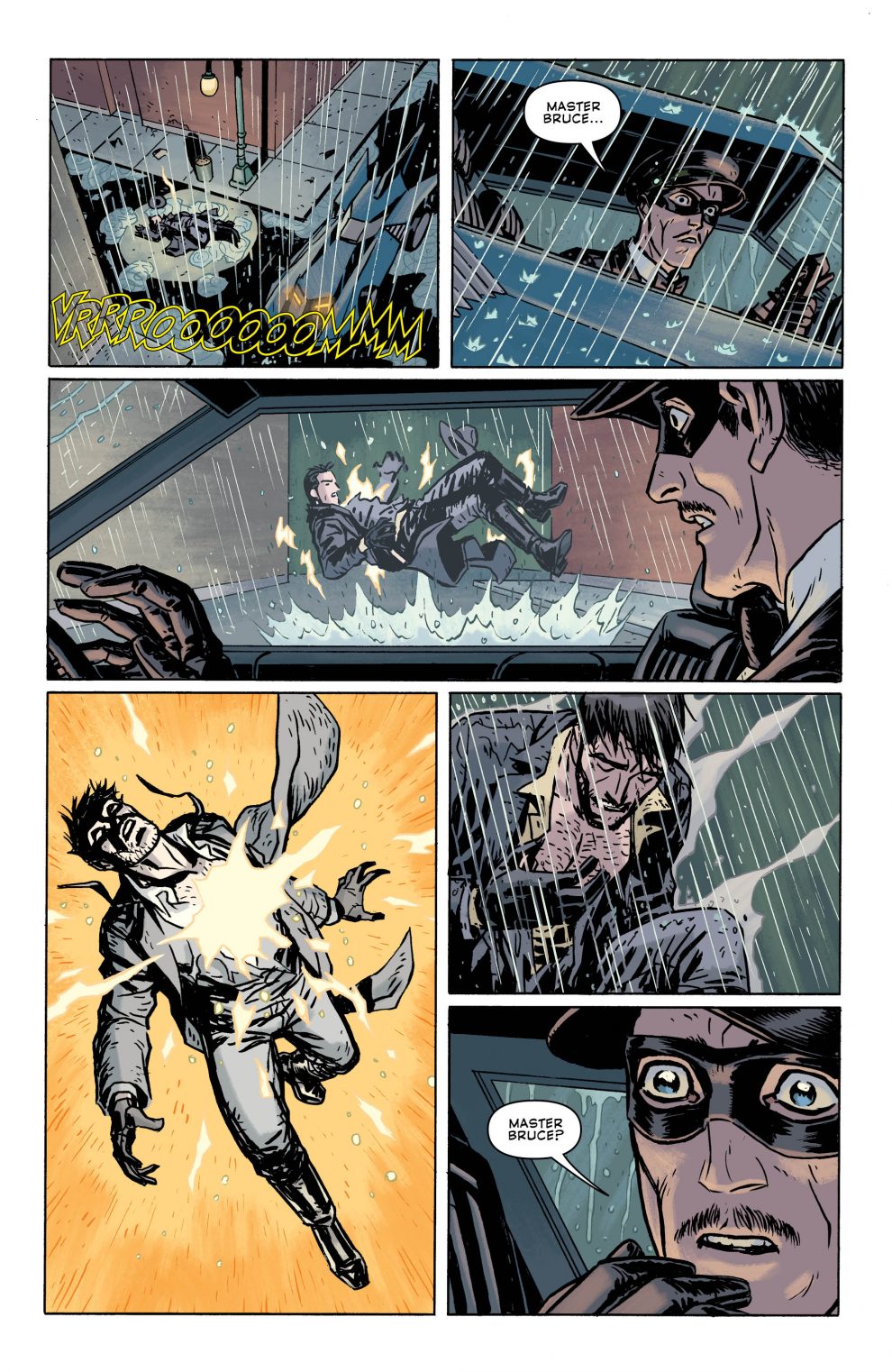 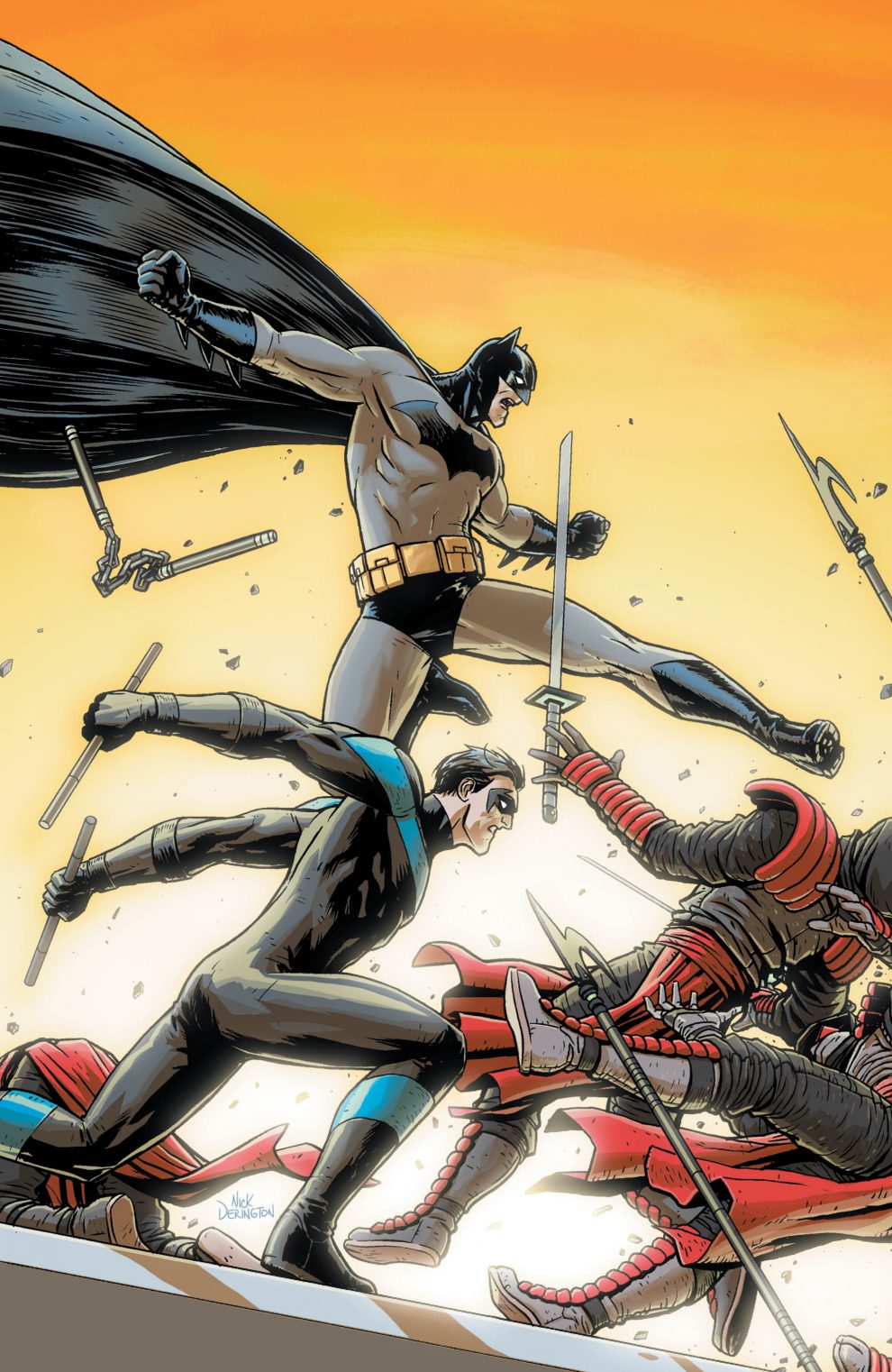 Batman sees the light in this issue… big time. While he may not have gone into it at the beginning of the story, after betting left to die without the protection of his Bat-suit, what was revealed inside the Faberge egg cast a new light on his character, transforming him into a very Bright Knight indeed.
I frequently rave about the genius of Nick Derington’s art and his designs for this series, and anyone reading this issue will have no recourse but to agree with me. The vistas, the facial expressions and his take, not just on Batman but on a veritable truckload of DC Comics’ greatest guest stars, has just been sensational. The appearance of everyone’s favorite intergalactic peacekeeping force rocked me to the corps.
Sorry…
Once again, Dave Stewart’s colors make Nick’s art shine all the brighter. There’s a ton of white in this issue, but Mr Stewart – not the one you’re thinking of – makes everything resplendent.
Troy Peteri does his usual masterful job of making Brian Bendis’ words just glow… literally. This series has boasted work from many of DC’s top letterers, but they do their work so well that reading the book, unless you have a degree in panelology, you’d be forgiven for thinking that every issue was crafted by the exact same team every time. It’s sad that a letterer’s work is always read, but seldom noticed. Troy, Carlos, Tom, Rob, Sal, Clayton – and every other letterer out there – I salute you.

Batman Universe #5 is one of those comics that make me proud to be a fan. I already pick this series up every month, but I’ll also be grabbing the collected edition when it hits. If you want entertainment, then this is the title for you… just watch out for those alien spores.