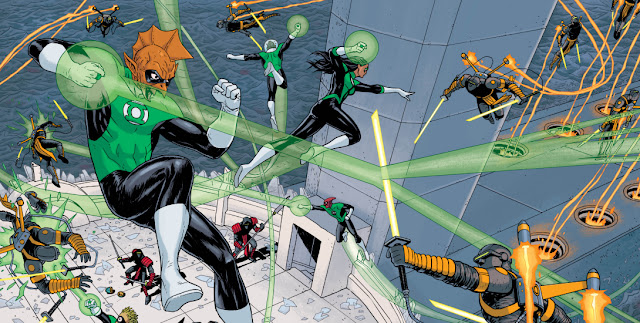 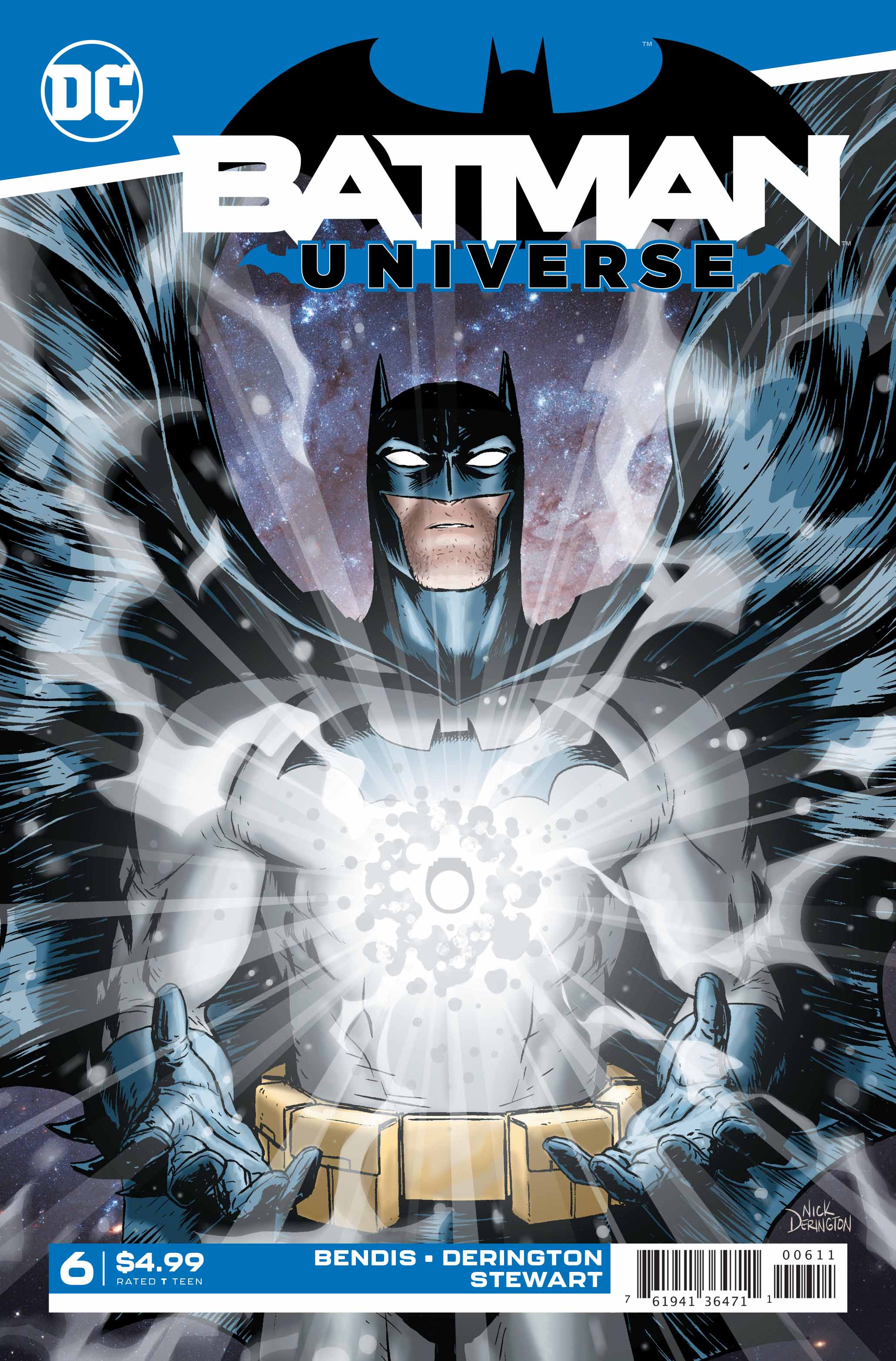 I’ve loved every single moment of this series, and Batman Universe #6 is a fitting final issue to what has been catalogue of pure joy. This tale of riotous riddles, cosmic odysseys, time-travel, crime and comedy has been thrilling, hilarious and emotional. I’m really going to miss this series arriving in my inbox, and in the drawer at my local comic shop, every month.
As I have come to expect from Brian Bendis, the finale is chock full of love, not just for Batman; but for Alfred, Nightwing, the Green Lantern Corps, Vandal Savage and all the wild and wacky sides of the DC Universe. I would’ve liked to have seen a little more of a reality devoid of Batman, but what we got to see was fascinating and enlightening. Bruce Wayne is an amazing character, in or out of costume.
We still got cowboys, power rings, assassins and aliens, though… so I actually have very little to complain about. 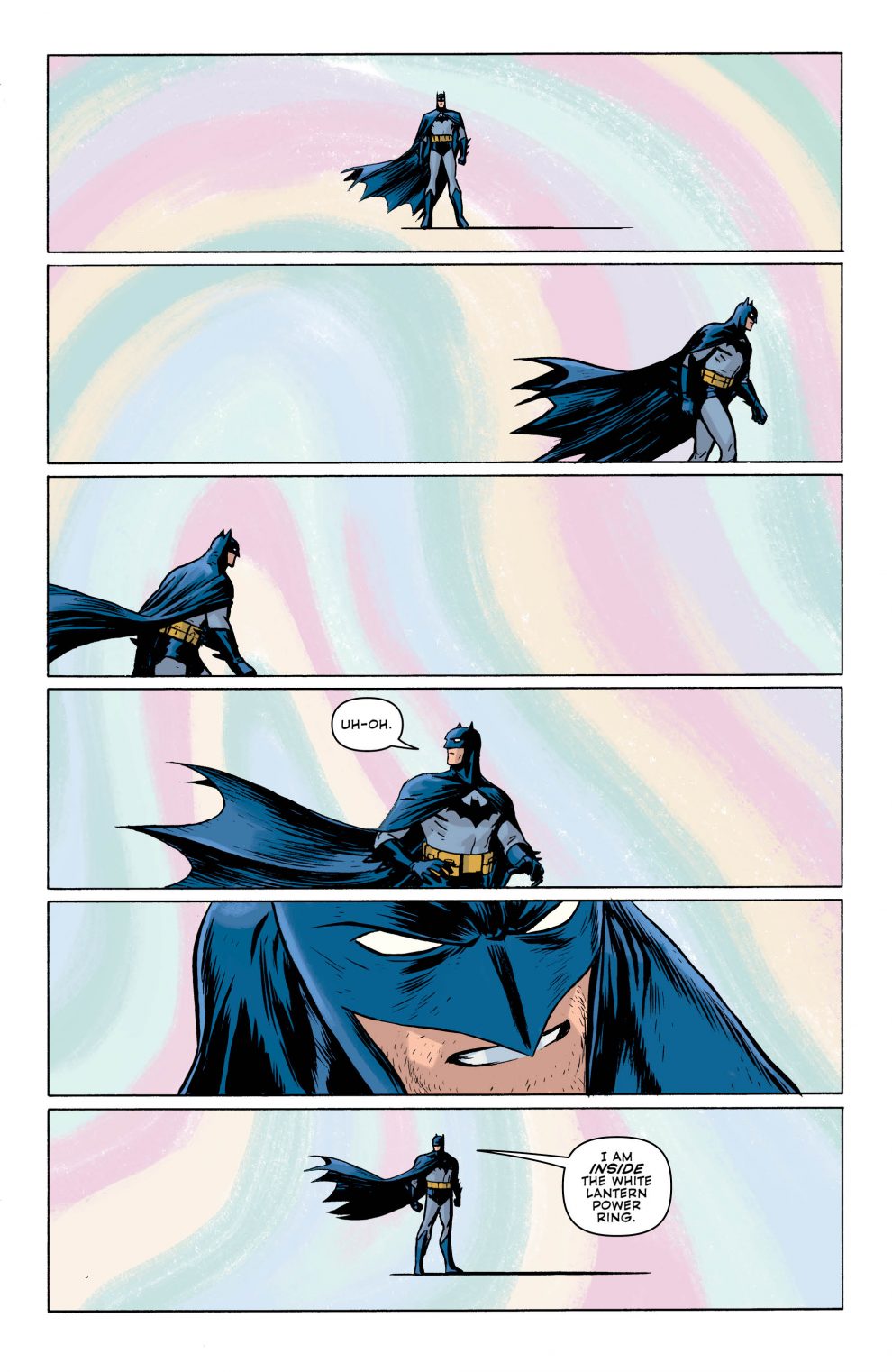 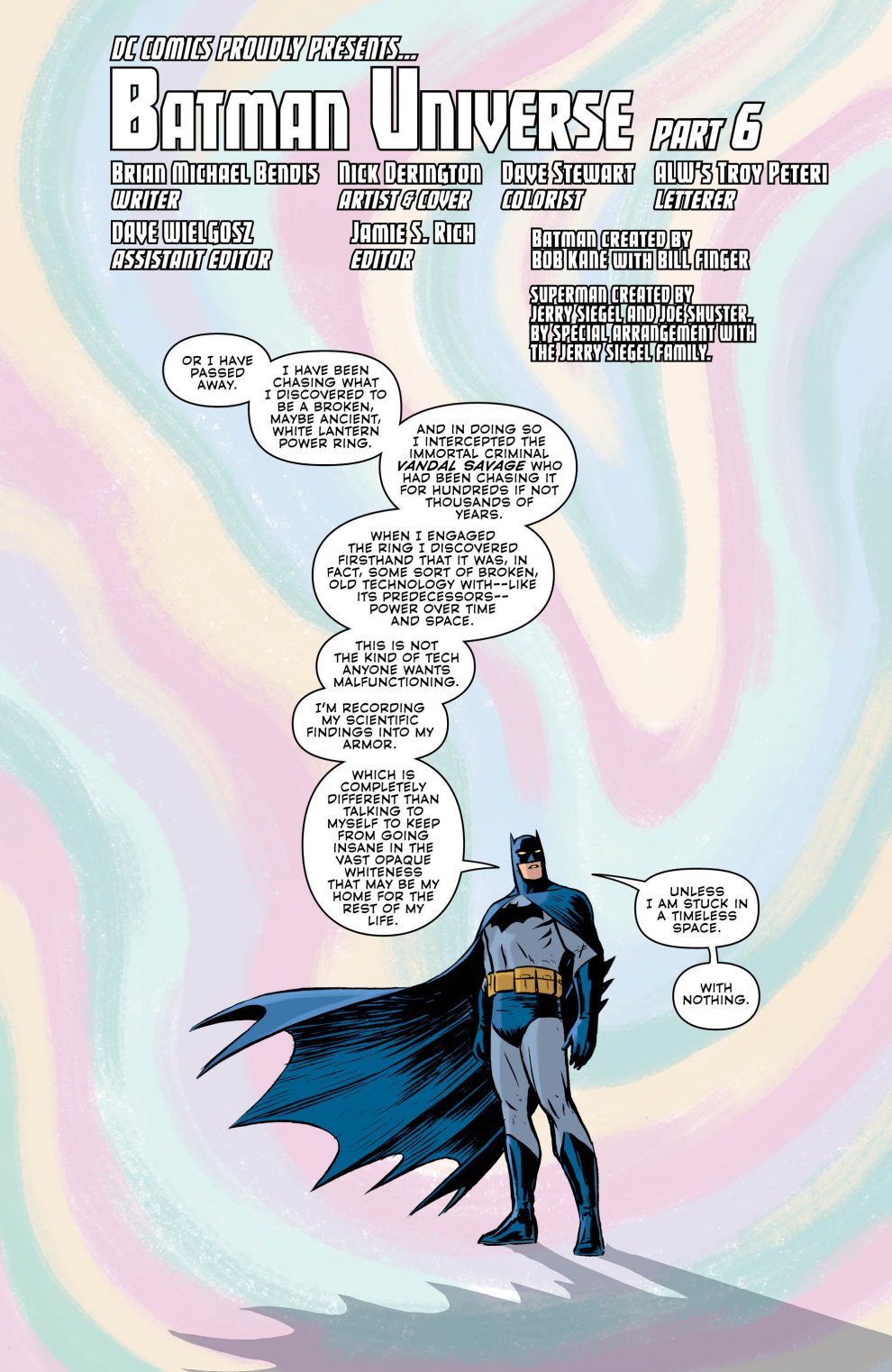 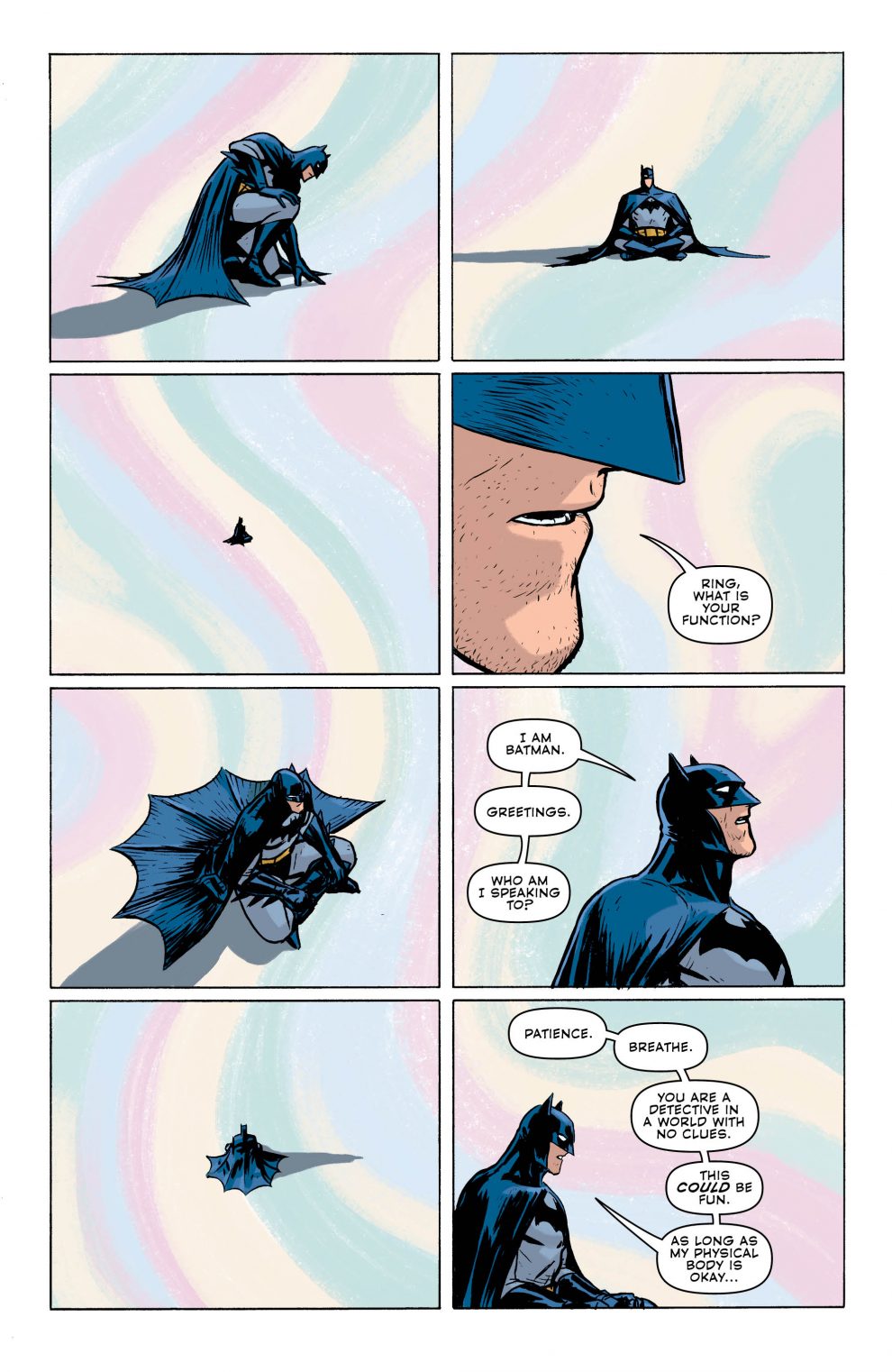 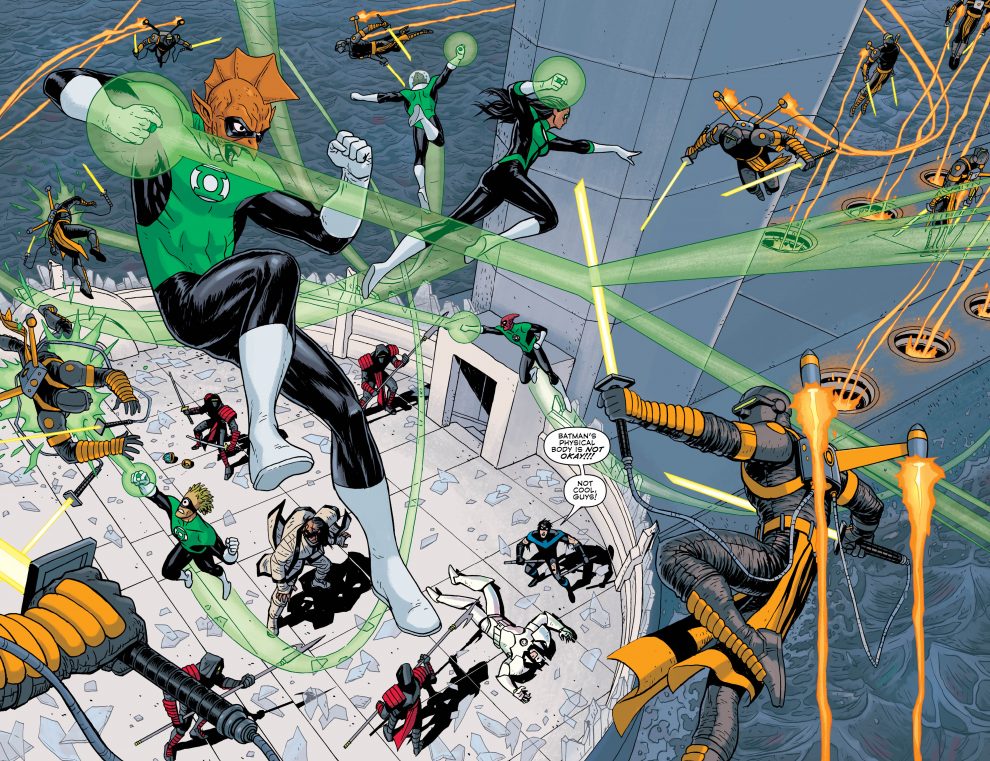 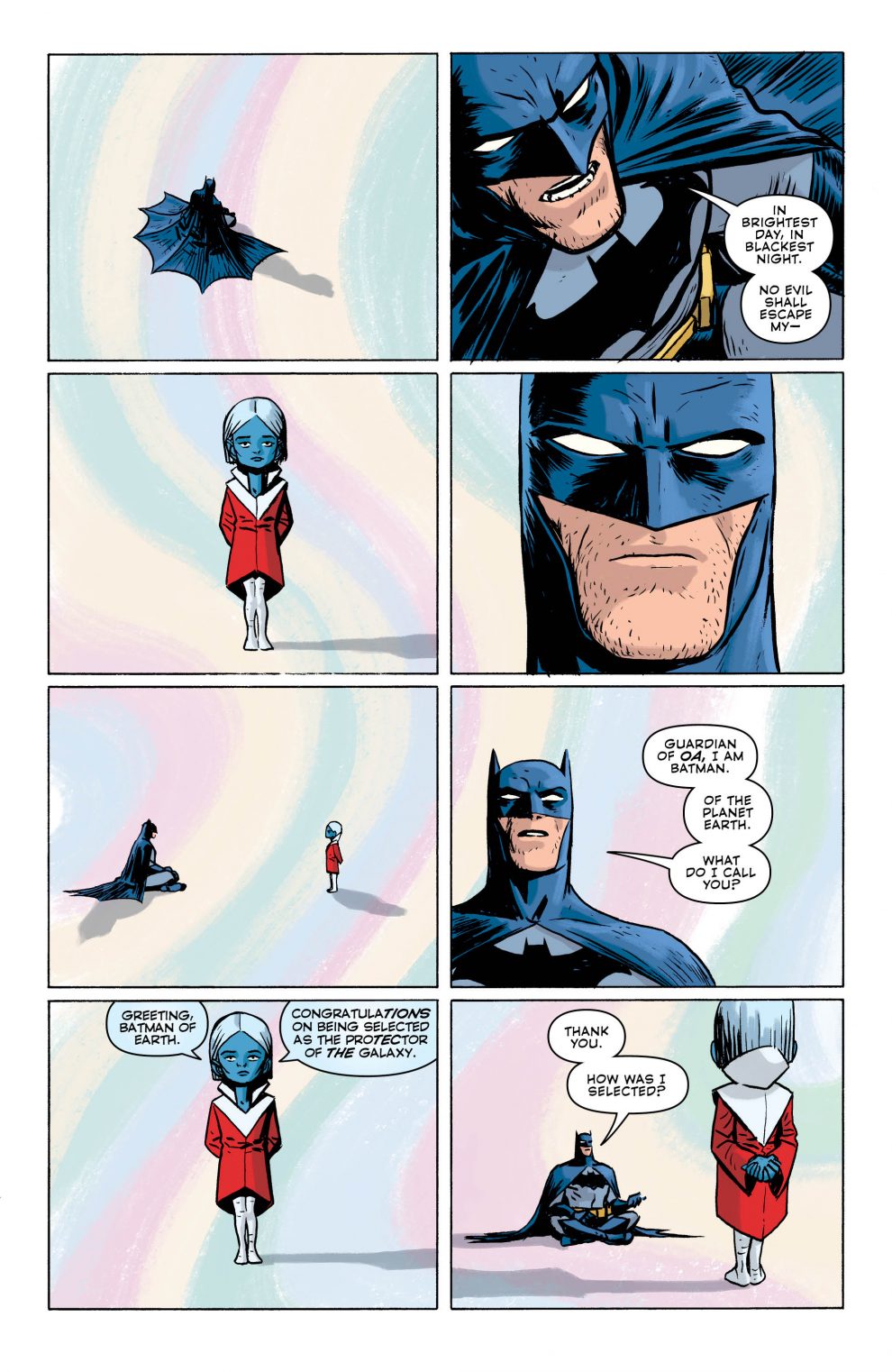 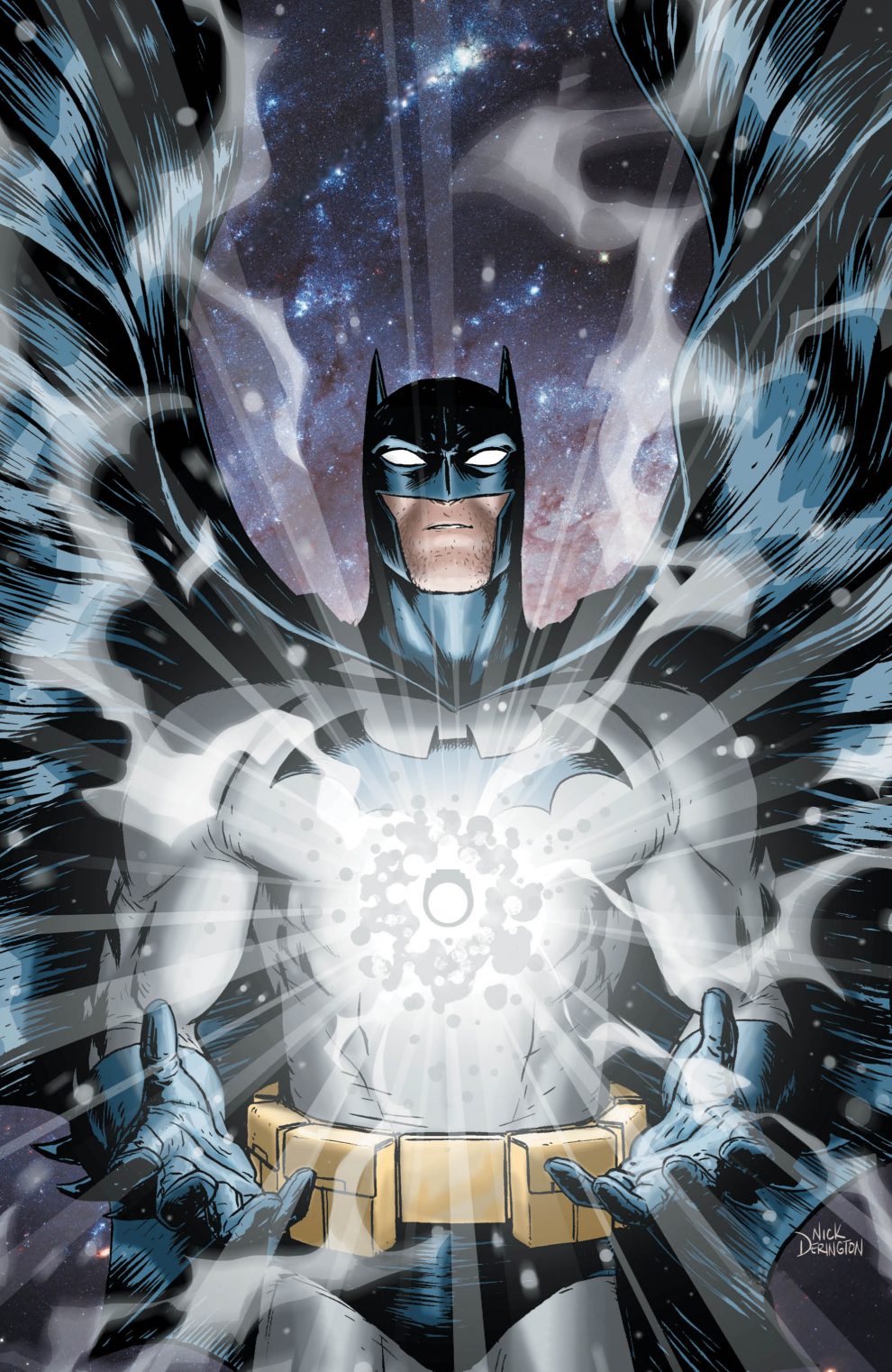 The silent sequences, beautifully drawn by the wonderful Nick Derington, are some of my favorite pages from any comic-book this year. We see our hero chasing down a psychotic Savage through many legendary moments in DC history. All of this makes for a wonderful tribute to this amazing comics company, to the Dark Knight himself, and is a true love letter to the fans. My personal favorite panel was the one featuring Batman and Enemy ace, which took me back to a favorite team-up from Detective Comics #404 (December 1970, by the incomparable Denny O’Neil and Neal Adams). This classic story was also adapted by the hilarious Brave & The Bold animated series.
Thank you, Nick and Brian.
As always, I must also give thanks to the incredible Dave Stewart and Troy Peteri. The colors and letters in the finale are as exceptional as the script and the line art. From the featureless void, to an army of Green Lanterns, Dave Stewart’s use of color – or pages of plain white background with the characters adding the only change of hue – have been a joy to behold. As for the letters, from the bold and the brash, to the almost imperceptible “TSSS” of a flaming sword singeing cloth, this comic has been a joy to read.

Batman Universe #6 was a joy from cover to cover, as this entire series has been. I’ve been gifted these issues digitally, for reviewing purposes, but was glad to go out and buy every single chapter. This is one of those tales that will also warrant me going out and buying the collected edition. Yes… it’s THAT good. I’ll miss Batman Universe, but the great thing about comics is being able to pick them up, again and again.
This is one series that will definitely be revisited and re-read for years and years to come.