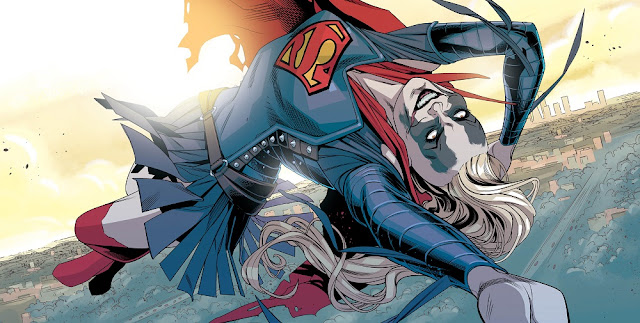 Writer: Jody Houser
Artist: Rachael Stott
Color Artist: Cris Peter
Letterer: Tom Napolitano
Review by Adam Ray
Summary
Supergirl #37 gives us everything we should ever have expected from Dark Supergirl. She holds in her head the lofty ideal that she’s a hero, and is determined to continue to fight for her justice. With her change in alignment though, that sense of right and wrong has become a little strained. At the same time, heroes we know and love approach her, trying their best to get through to her, but with little success.

This issue does a few things very well. We get a real vision of this new take of Supergirl. Comics readers have probably always wondered what she would be like when we saw her change in the last issue, and this time we get a real glimpse at her character’s new direction. This Supergirl can save a bus full of people and then flip the bus without any regard. The change is so deep.
Supergirl’s evolution in the past year has all led here. She’s gone from a vision of inspiration, to an angry survivor, to a chaotic force, bent on destruction.

I can’t find too much to fault with this issue. I will say that the direction of Supergirl fleeing from the heroes, then being drawn back in suddenly by The Batman Who Laughs seemed odd, but maybe it was just another way of drawing a reader back in, but i'm not sure if there wasn't a better way of doing it.

This is the series at its best. Supergirl #37 gives us a dark take on a beloved character. It shows how deep her transformation has gone and that she's something to be feared. We see how fumbling attempts of beloved heroes really don’t do much in the face of her broken morality. We can all now see just how big a threat The Batman Who Laughs actually is,and we can only wonder how far lower Supergirl can sink withe this dark persona.