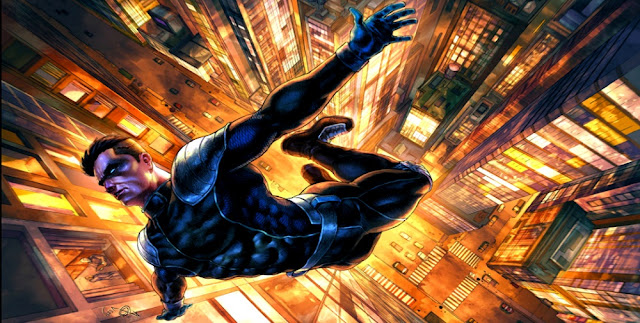 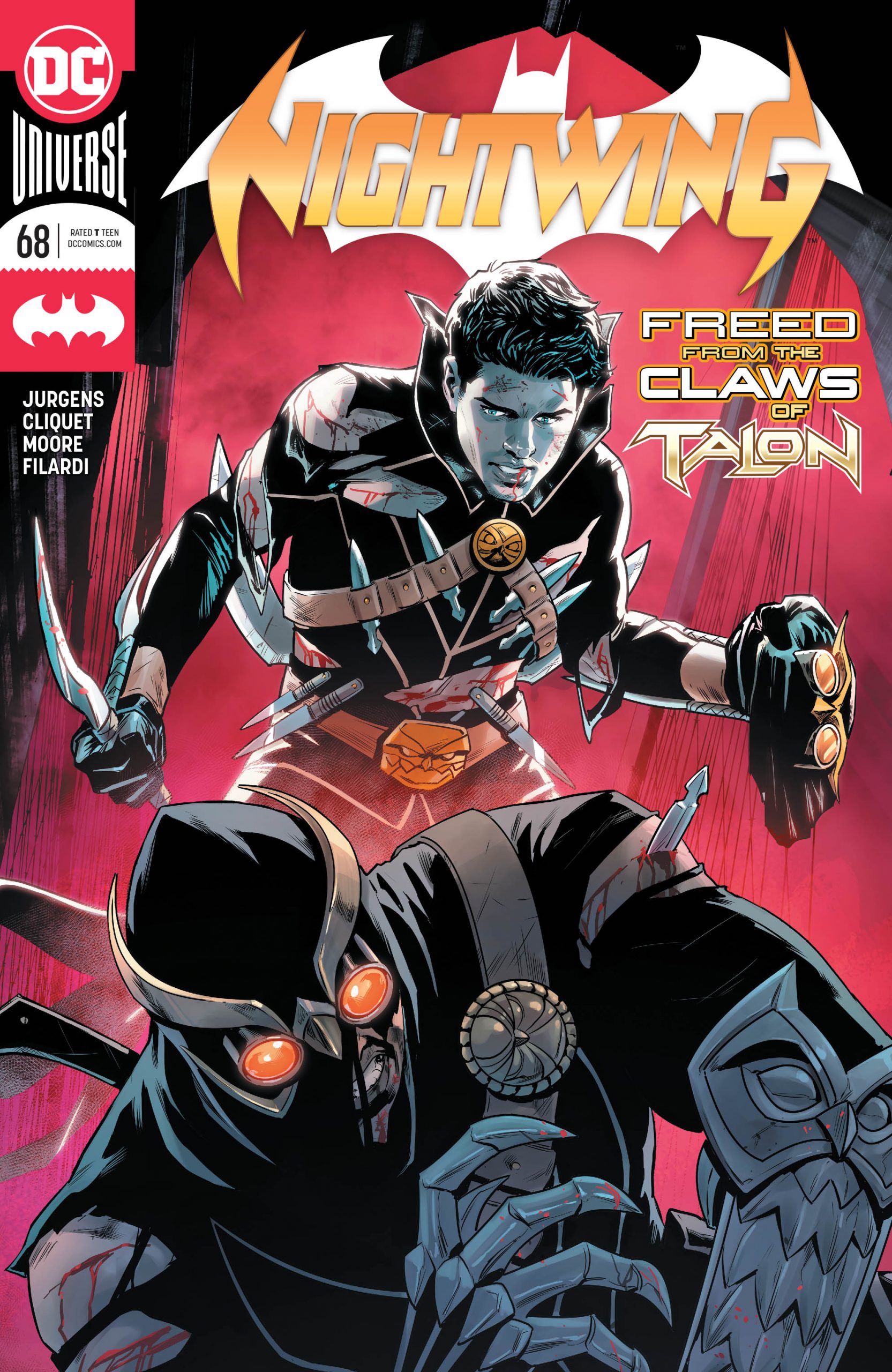 Review by Steve J. Ray
Boom, baby! in Nightwing #68 “The Brain Bomb” finally goes off with explosive results. Buried memories burst to the surface and lead to some awesome action. As suspected, the destruction of Talon’s hypnotic device, coupled with a grazing blow to the skull, have not only negated the Court Of Owl’s brainwashing, but they’ve also awoken Ric Grayson’s suppressed memories. As always though, there’s a lot more to this issue than that.
Dan Jurgens didn’t have an easy task when he took over the writing duties on this title. Fan backlash (for reasons that still baffle me) has strongly critical of Dick Nightwing’s amnesia and the character’s rejection of both his past as a crimefighter, and the name Dick Grayson. It’s difficult joining any book mid-saga, but continuing an unpopular storyline, making it your own and guiding it to a satisfactory conclusion is no easy task.
Has Mr Jurgens accomplished any of that? You bet your Jimmy and Juans, he has!
I knew going in that the issue of Nightwing’s memory loss would be temporary, and that the status quo would be restored at some point. Unlike some “fans” however, I didn’t throw all my toys out of the pram, but just went along for the (extremely entertaining) ride. Dan Jurgens hasn’t just resolved the memory loss problem cleverly, but making it just one part of a deeper plot from the start and involving Dick’s errant “family”, the Court of Owls, was a stroke of genius. Oh, and more importantly… everything hasn’t been tied up in a nice little bow, there are still loose ends, and there will be further repercussions. I think these will lead us all nicely to the title’s anniversary 75th issue. 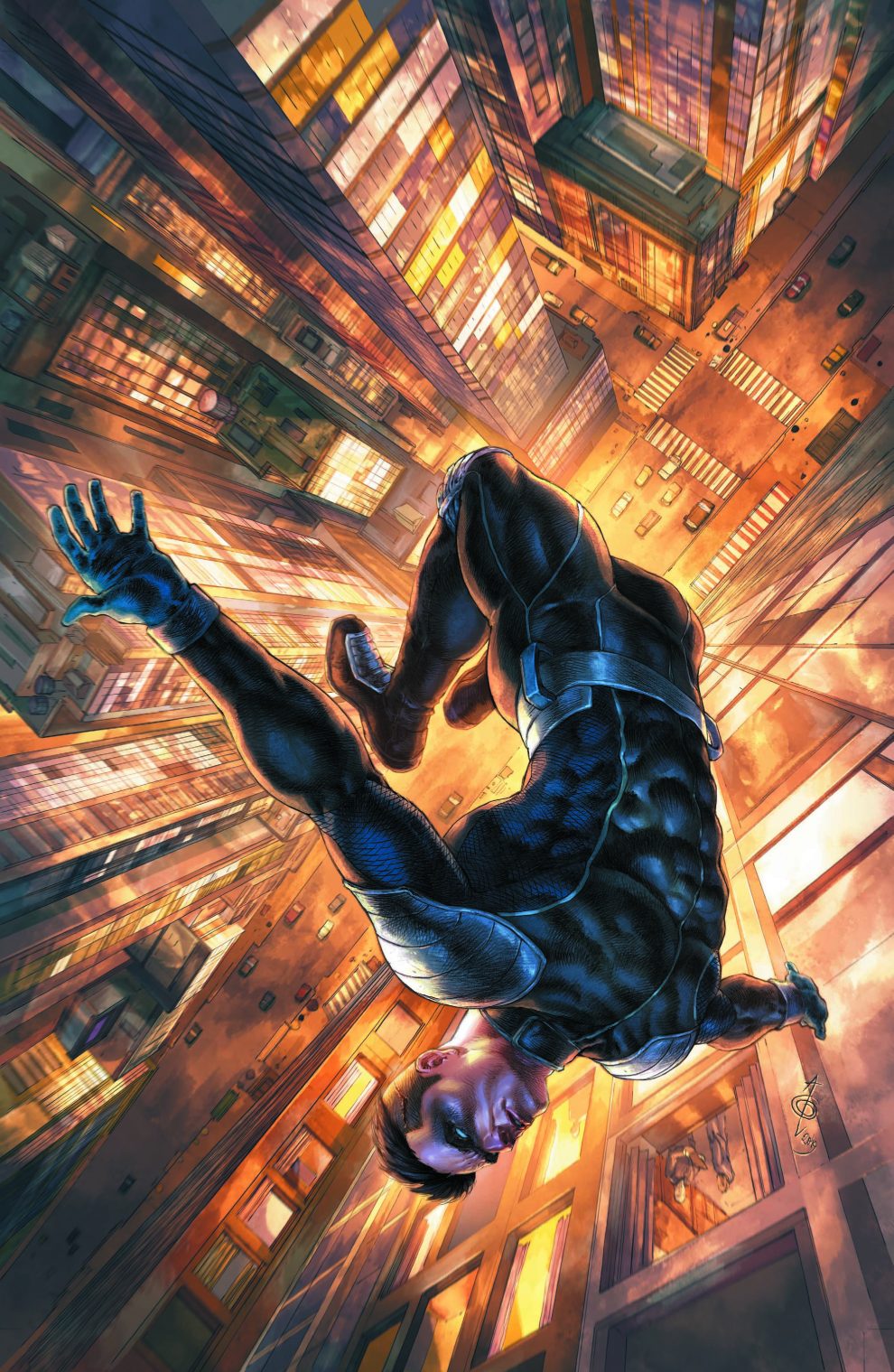 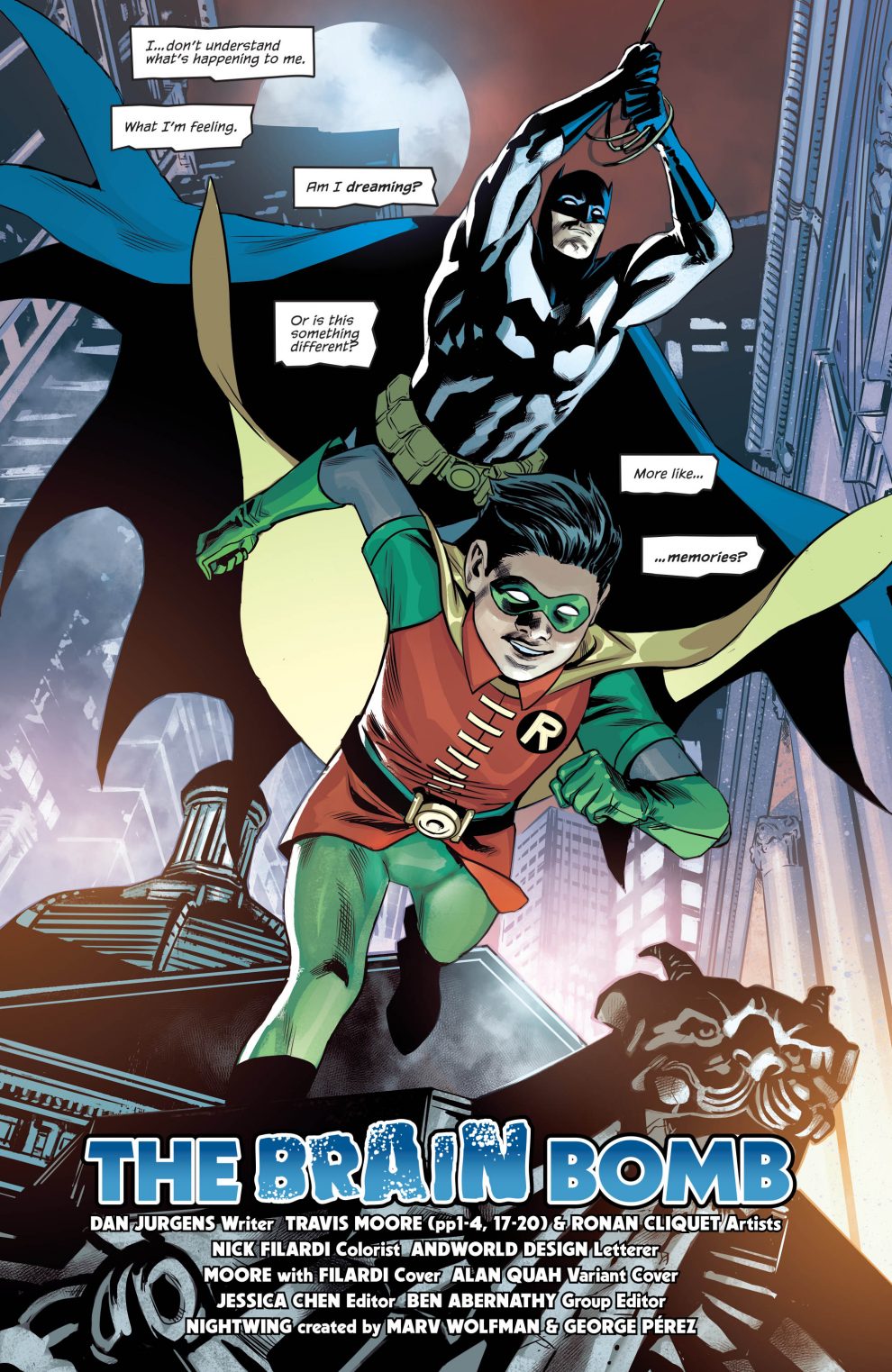 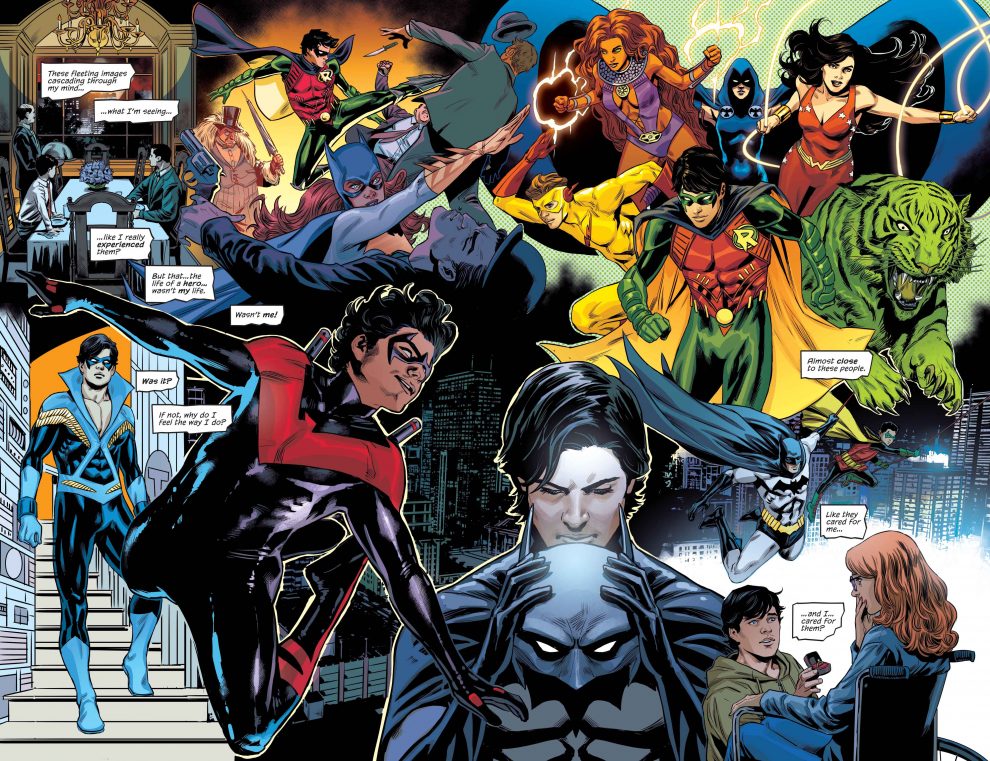 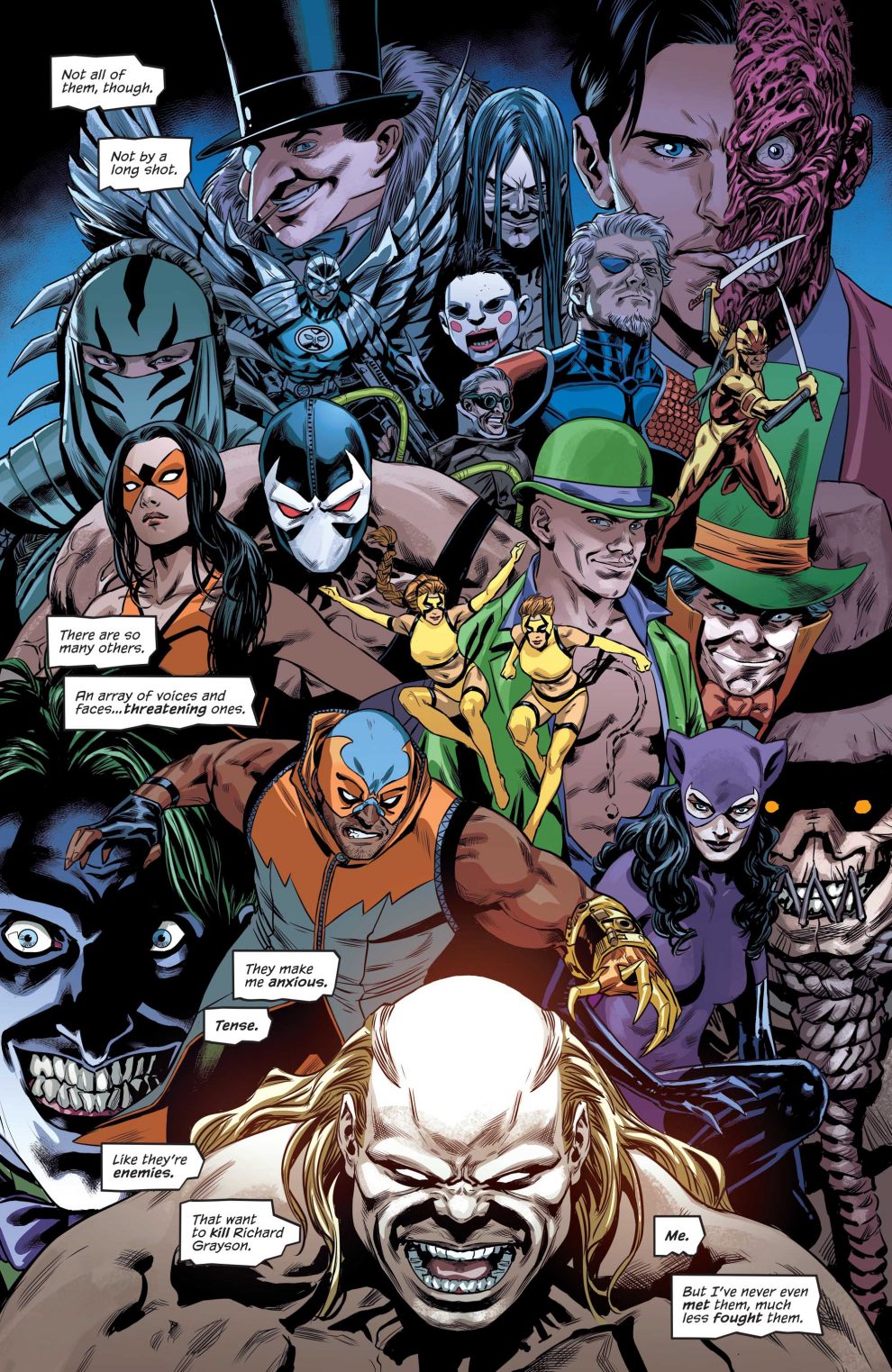 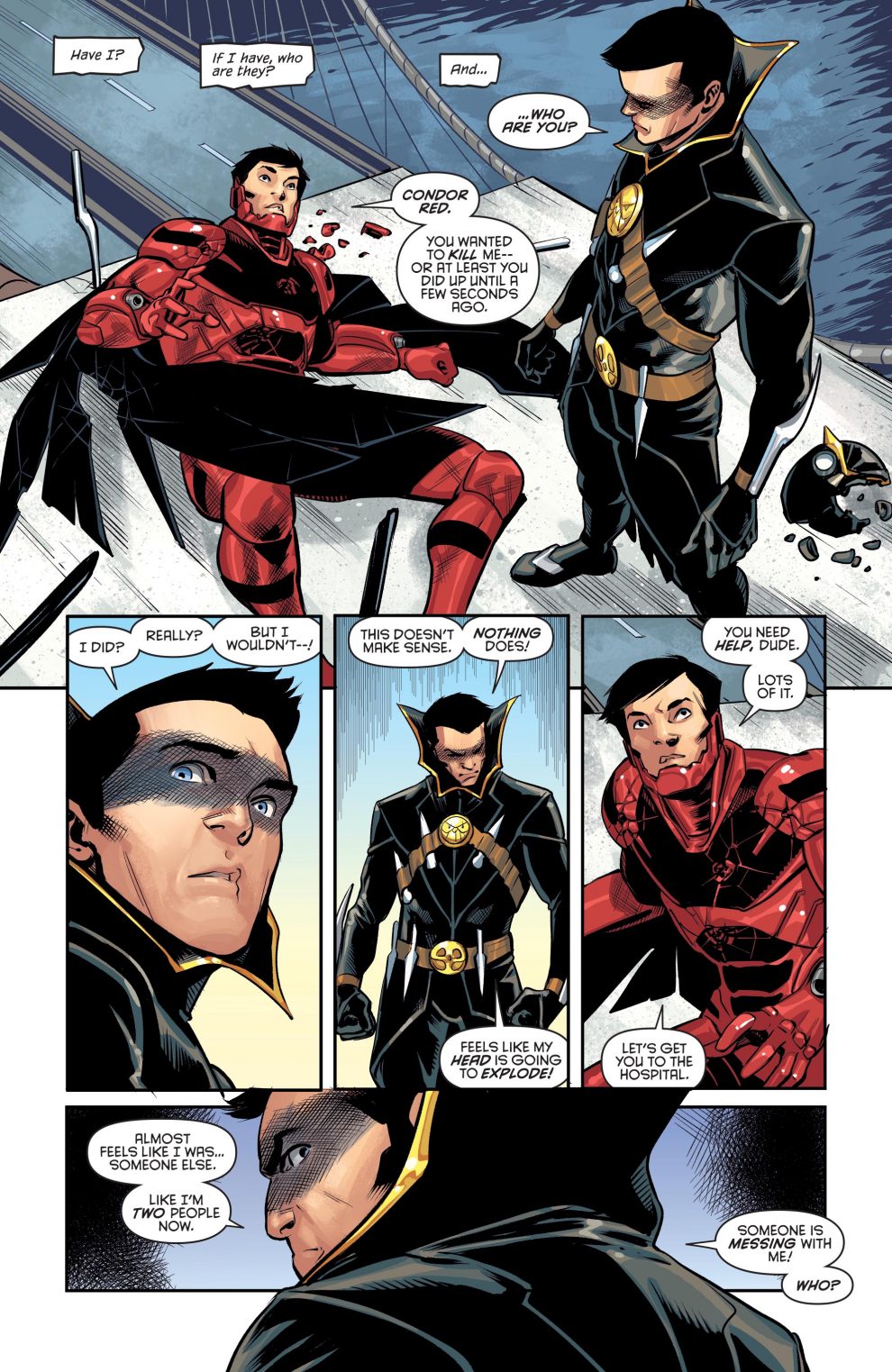 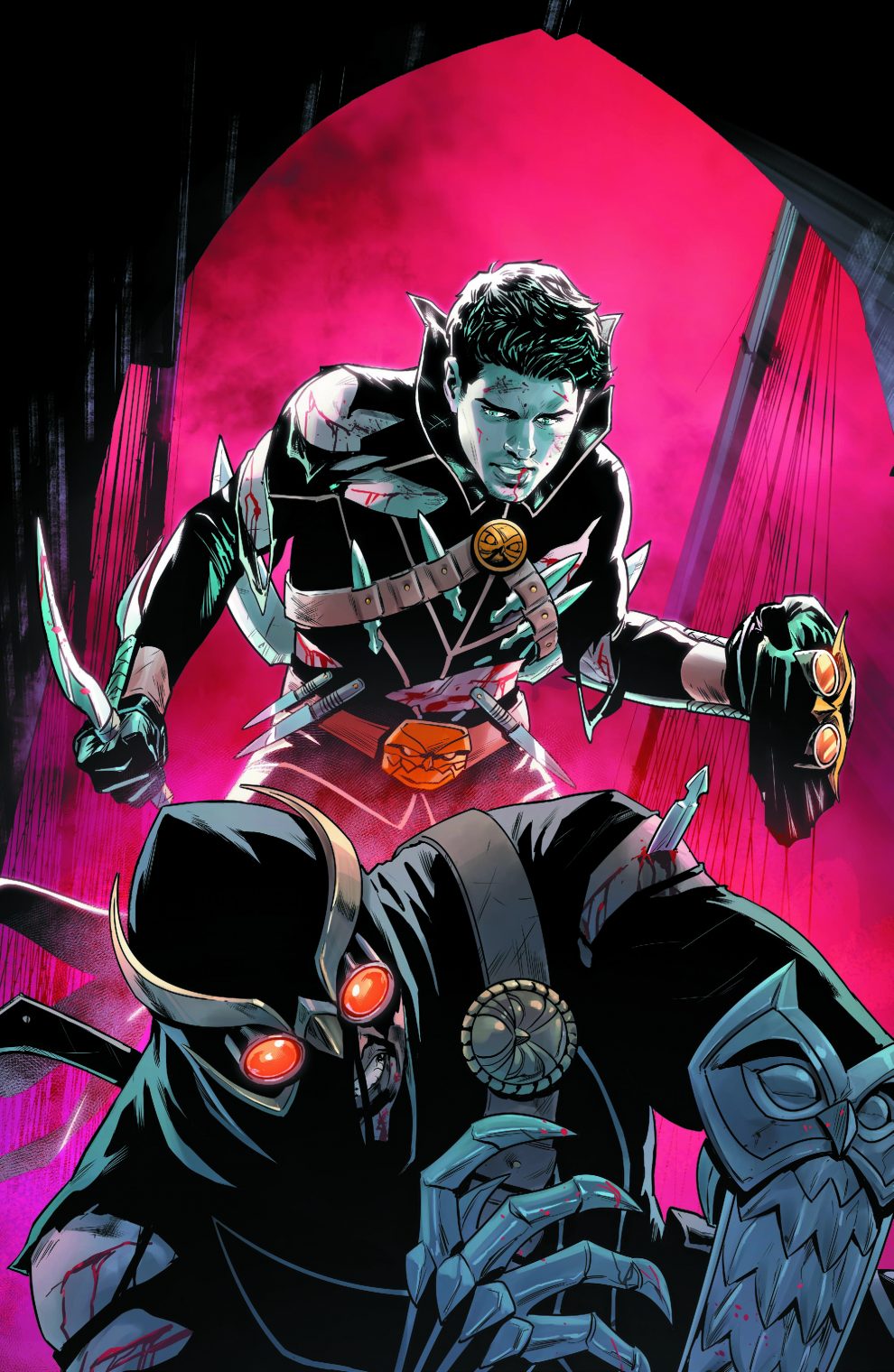 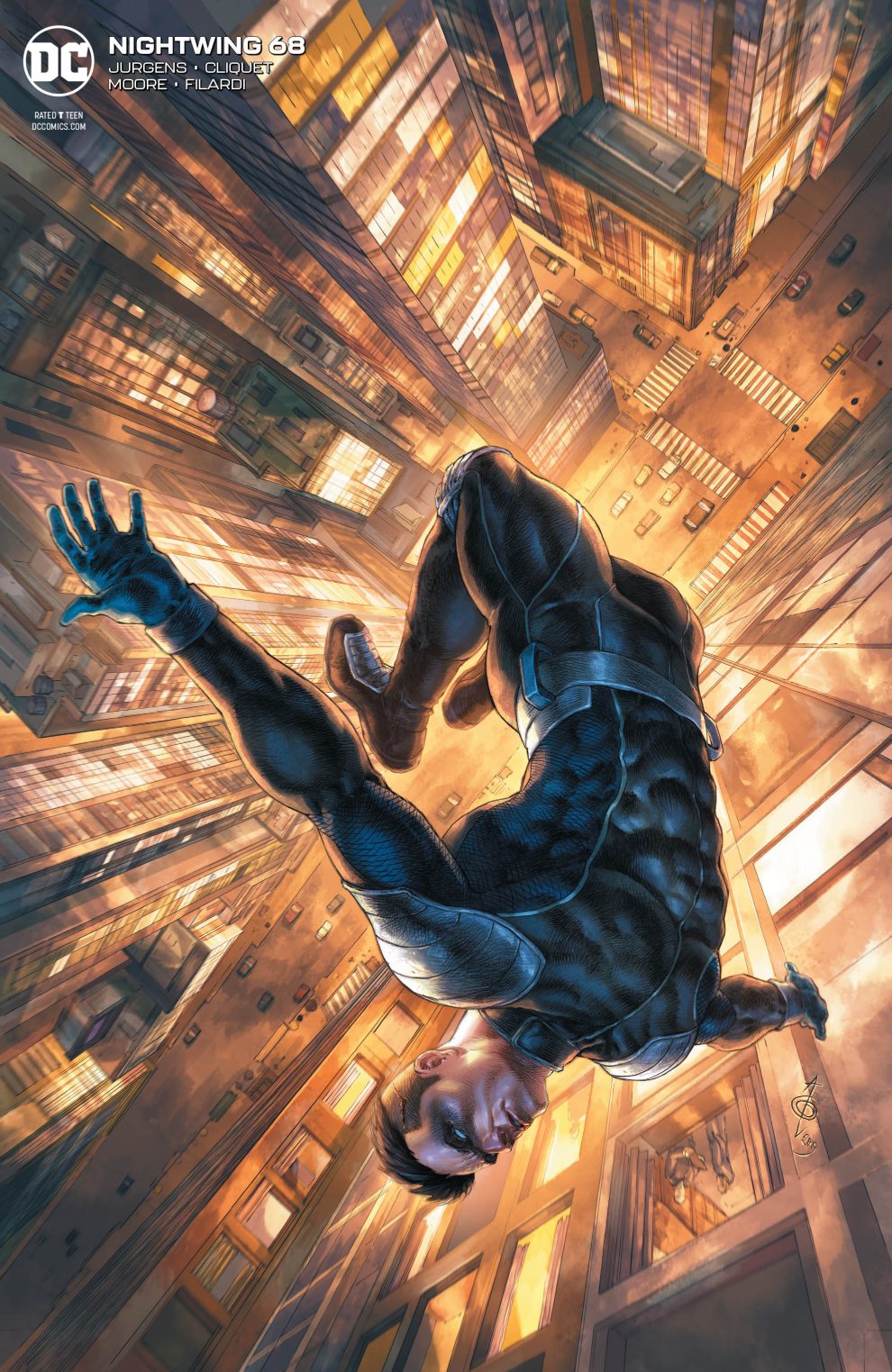 I frequently complain when an issue is drawn by more than one artist, but when a comic features art by the two greatest Nightwing artists of today, then I have very little to grumble about. Yes, this issue has a stunning intro and outro by the wonderful Travis Moore, with the main story handled by regular artist Ronan Cliquet. Both talents are on fire in this issue, and Nightwing #68 is one of the best looking chapters in the series’ history. The flashbacks showing Dick’s heroic past and his impressive rogues gallery are simply stunning, and the bridge-top battle between Nightwing and Talon is absolutely awesome.
Color artist Nick Filardi, as always, does an incredible job of making the book flow, making the transition between the two art styles feel smooth. While I love Nick’s work, I cannot forgive him for coloring Robin’s lapels red on (the otherwise sublime) first page of the book. Naughty, Nick… very naughty.
AndWorld Design have done a great job too. From Ric/Dick/Nightwing’s distinctive reminiscences, to the “Brain Bomb” title page and Talon’s dialogue, all the way to the subtle and varied sounds of violence that we see/hear over the course of the issue, the letterer’s art is of the highest level.

If any of this series’ doubters, and all the Ric haters out there need a pick-me-up, then Nightwing #68 is just what the doctor ordered. Personally I’ve loved seeing an all-new side to the world’s first, original comic-book sidekick, but I’m sure that this creative team still has a few surprises up their sleeves. I look forward to finding out what they are.