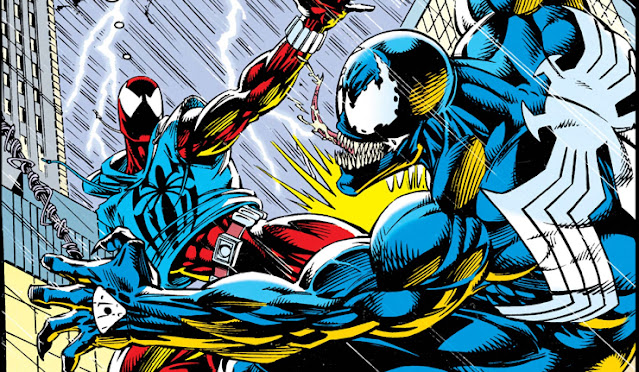 The second part of the Clone Saga kicks off with Ben Reilly's solo adventure. For the next few issues, the Spider-Books split up where one pair follows the adventures of Ben, while the other pair follow Peter Parker. There is some overlap and subplots that carry into each other's episodes, but still a separate story. It definitely feels less overwhelming for readers to only need to focus on two books, instead of four.

"The Exile Returns" highlights Ben Reilly taking on the identity of Scarlet Spider and his first encounter with Venom. But initially, he is extremely angsty about his life being a lie. It doesn't help that he has been hanging around New York, because it has constant reminders of memories that aren't really his. 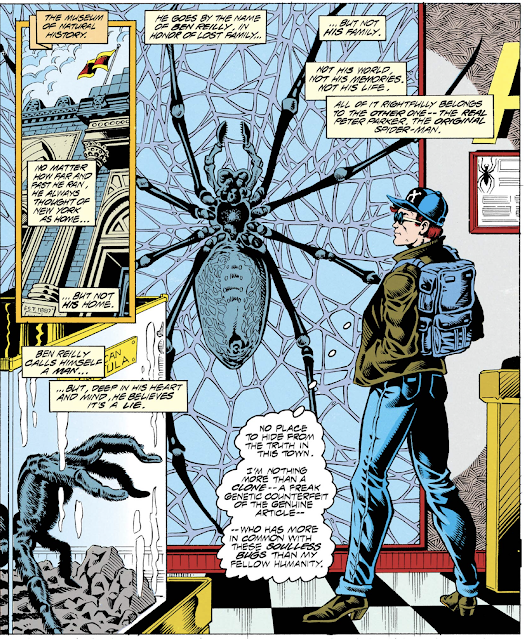 One trope that the beginning of "The Exile Returns" constantly beats to the ground is having all these crimes randomly occurring around Ben to prompt him to take action. Remember that scene in Spider-Man 2, where a retired Peter Parker sees a guy getting beaten in an alley? It's implicitly telling Peter can't escape his destiny to be Spider-Man.

"The Exile Returns" also features that scene, but like four times over. The fact that Ben keeps running into crimes so many times and the randomness of them makes it  downright hilarious.

Like, where Ben spies on two thugs robbing a hot dog cart (!). Or when he sees a woman  inexplicably at the top of the Brooklyn Bridge attempting to commit suicide. Or how he is eating Chinese food and it just so happens that the bank being robbed in front of him. Or the time he runs into a street gang robbing a homeless guy.

Reading these comics in quick succession gives the impression that New York some kind of Mad Max-style, apocalyptic hell hole where crime is rampant. Seeing essentially scene play out makes for a repetitive read. It's also kinda the the pattern that the Clone Saga writers will continue to play out over the course of, like, three years of storytelling. If there is a good scene/ idea/ trope/ character, then the writers will make sure you another version of it ten more times.

Next, we meet Venom who is in a weird stage of being a villain and an anti-hero. Truthfully, I personally dislike Venom playing a hero, because he has been so murderous he has been. So, I personally don't care when Venom says things like, "I will save any innocents!" or whatever. This comic does a good job of demonstrating why I hate Venom as a hero.

Here, he stops a armed car chase, but also almost kills an innocent truck when he careens the criminals' car of the freeway. Later, Scream- a female symbiote- begs for help and he immediately tries to kill her. Similarly, he threatens to remove Scarlet Spider's spine after meeting him for, like, five seconds. There is even a point where Venom pontificates, whether he truly is remorseful about his actions and he quickly dismisses it.

"Should we be laying amongst the bodies of our own victims? NAH!" 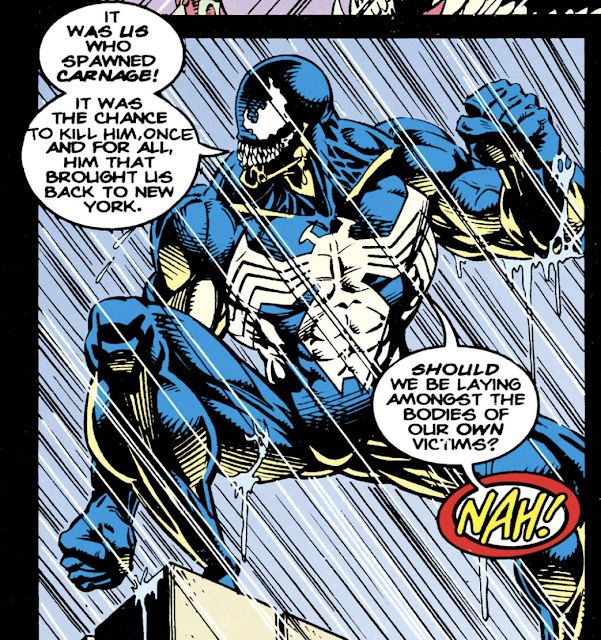 It's hard to tell if the comic is intentionally casting an ironic take on Venom's blatant disregard for human life. Sometimes he seems well-intentioned, but aloof. Other times, he is flat-out murderous. In this comic, Venom's characterization varies from moment to moment.

So, Ben hears a nearby report that Venom is on the loose and he throws on a make-shift costume and proclaims that he'll hunt Venom down. 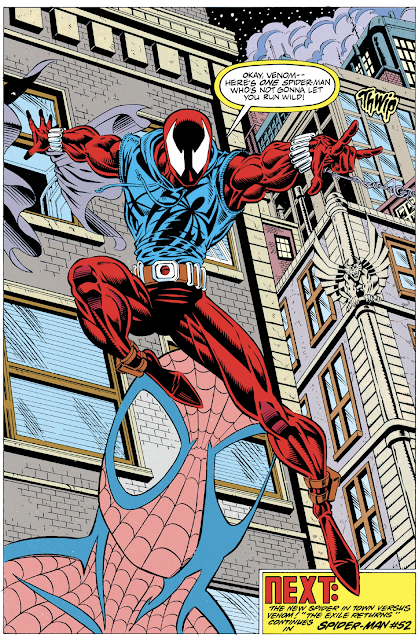 Regarding the Scarlet Spider costume. According to former Marvel editor Glenn Greenberg, the costume was designed by artist Tom Lyle to be intentionally cheesy. Even back then, they knew that putting a sweatshirt over spandex was silly. That logic makes some sense the initial part of the storyline, since he is in a rush to take-down Venom, but they never explain why Ben continues wearing such a cheesy costume for much of his career.

Now seems like a good time to talk about the art in Web of Spider-Man.  I know that artist Steve Butler is a very 90's artist, but man, his stuff looks good. It has all the over-the-top anatomy of a 90's Marvel artist, but it also has a cartoony appeal. He also may have drawn the most attractive Betty Brant... well ever.

Tom Lyle's art style is a lot sharper and more angular, but still pretty dynamic and tight. The low-point artistically is Ron Lim and Phil Gosie's art in Spider-Man Unlimited. It is clearly rushed and the anatomy is all sorts of crazy.

In fact, it is hard to see what's the point of the Spider-Man Unlimited title. Its Clone Saga stories never add anything to the overall plot, the writing is noticeably lower quality than the main books. On top of that, it cost more than the other comics and only came out every three months. With the glut of Spider-Man comics that were coming out at the time, it's a surprise that the title lasted as long as it did.

All that aside, Ben finds Venom at the Roosevelt Island tram and his battle went poorly. Almost immediately Venom incapacitates Ben. Probably the most interesting thing here is how sensitive to Ben is to Venom's trash talk, calling him a fake.

Looking closely, Ben seems to have this attitude of fatalistic nihilism throughout much of this story arc. He doesn't really matter, because he isn't real. He's just a clone. He even stops caring to stop Scream and Venom's rampage after a while too, because he becomes so jaded.

It's a genuinely interesting twist to Spider-Man's origin. In the original origin, Peter is jaded because he believes the world has never helped him. Here, Ben is cynicial, because he equates being a clone to being sub-human. The writers recognized this parallel and mined its dramatic potential well.

Before Venom kills Ben, their battle is interrupted by Scream. She wants to talk to Venom about how to control the symbiote. In response, Venom. And.... that's about it. Her plot really goes nowhere and Scream is forgotten in the last part of the story arc. Her character never really develops beyond that initial premise. 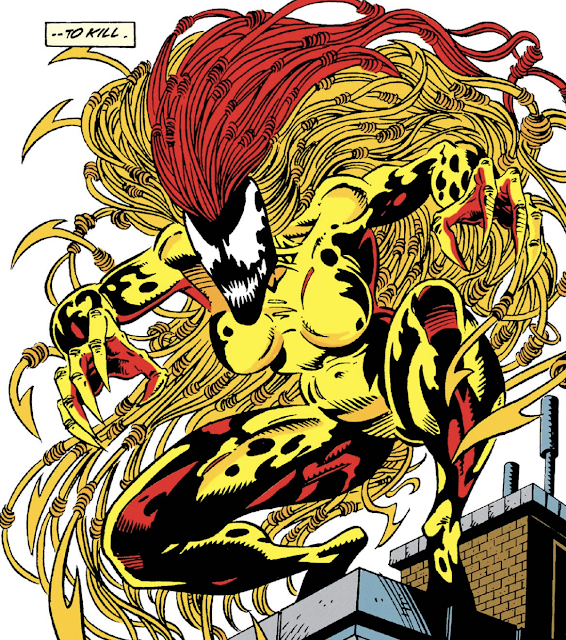 A character who goes on to develop into an intriguing figure in his own right is Kaine! I'll talk about him more in later articles, but Kaine is such a cool, interesting character that he went on to headline his own series for a while. Here, Kaine discovers the Scarlet Spider via  newspapers and immediately goes off to find him. 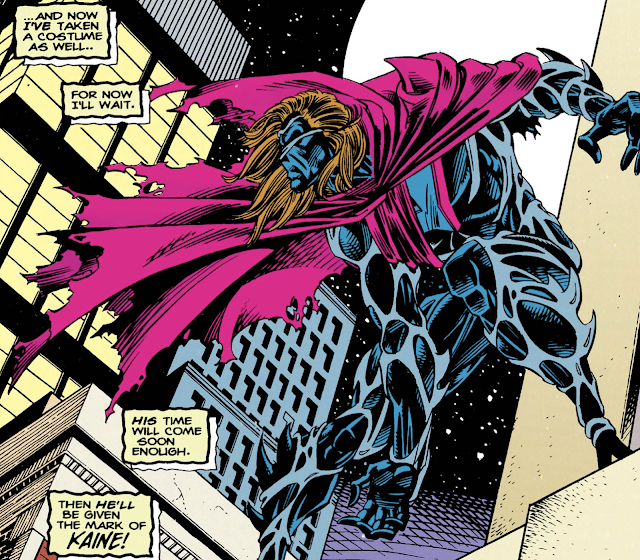 One enticing development that is Ben creating new impact webbing and stingers to help him against Venom. Why has Peter never invented anything like this to aid him? Also, why hasn't Peter  co-opted those weapons into his arsenal since after the Clone Saga? Up until more recently in the comics, Peter never used them. Talk about wasted potential.

So, Ben finds Venom in the process of killing Scream and their duel goes a lot better for the Scarlet Spider thanks to his new inventions. In fact, Scarlet Spider pretty decisively beats him with some well-placed impact webbing pods in Venom's mouth.

Venom's defeat not only cements Scarlet Spider's hero status to the general public, but also is a personal victory. He did something that Peter rarely did. Ben swings away feeling not only a sense of achievement, but a bolstered sense of personal pride and value. It is a great way to end one part of Ben Reilly's character arc, taking him from a man with an inferiority complex to a person with self-worth. 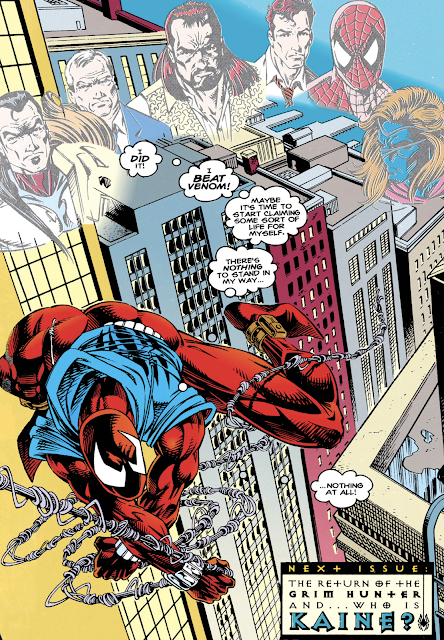 Side-note: We see the Kraven's son, the Grim Hunter vowing revenge on Spider-Man. What's up with the Grim Hunter's outfit? Honestly, the design is decent, but why does he need so many belt straps? They don't even look like they hold anything. 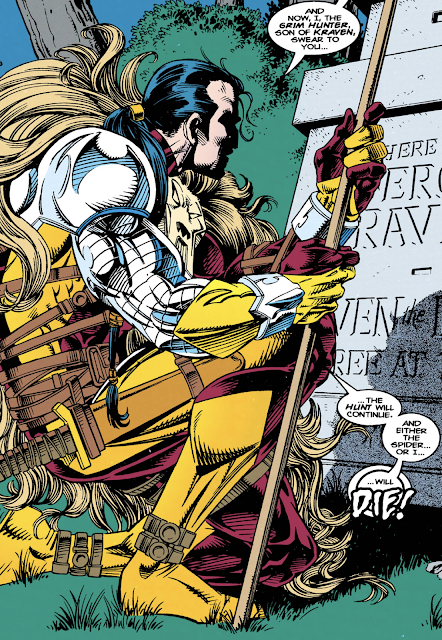 Another okay-ish episode of the Clone Saga. It's great seeing Scarlet Spider and his personal arc, but the storyline is already showing signs of sagging with unnecessary characters or poor characterization. The meter is inching closer to the "Not Good" territory. 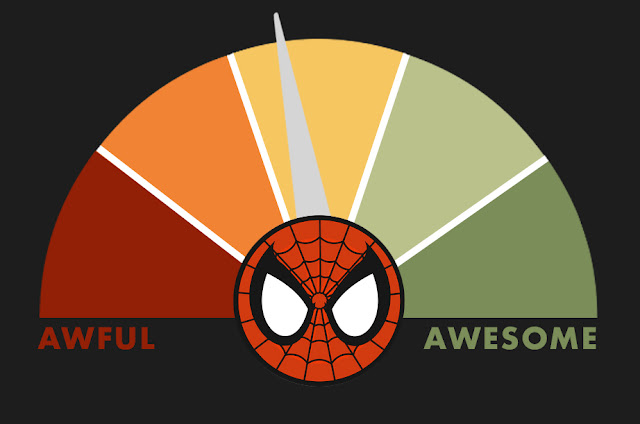