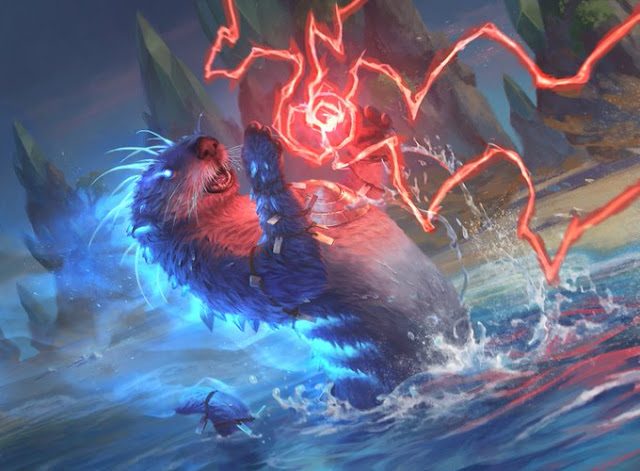 The world has gone mad. No, I'm not talking about the big scary thing. I'm talking about those other, big scary things. The teeth, and claws, and spines, mandibles, wings, stingers, antlers. Monsters are coming from Magic's new, flavourful set. Ikoria, Lair of Behemoth spoiler season is only a few days in, and we're already seeing promotional cards that hark back to some of cinema's greatest monsters. We've also seen the likes of a celebrated mechanic returning to Standard in a major way. Lastly the advent of two mechanics that are so incredibly unique and bold, nothing in their like has been seen since.

Ikoria is the wilderness that Wizards design is using to stomp out something very new, and I haven't the faintest idea how a lot of it will go. I guess we need to step out into the wilderness to see just what to expect. 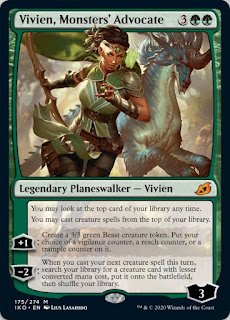 Let's start with the Planeswalkers. Everyone knows how they work, right? A character we know like Vivien makes perfect sense in this setting. She's got the reputation of somehow being sad at the loss of her people but also like an inter-dimensional Steve Irwin. Five Mana for 3 Loyalty is pretty steep, then again she protects herself about as well as a Planeswalker I've seen. Her plus shows off something new about the design of creatures. Counters that give out abilities are abound, and her plus to make either a 3/3 with Vigilance, Reach, or Trample is a pretty good. 5 mana for a 3/3 with one keyword is not worth, but the minus to chain two creatures of consecutive CMCs is still immense value, especially considering the second creature can't be countered. With all of this going on, we haven't even discussed the fact that she has two statics that ensure immense card advantage, extending your hand out to the top of your deck - a zone that's immune to your opponent's Agonizing Remorse. I'd like to think she'd see some play in the top end of Green/X Stompy, but dedicated Green decks won't consider her in place of the other 5 mana Green Planeswalker that makes 3/3s. 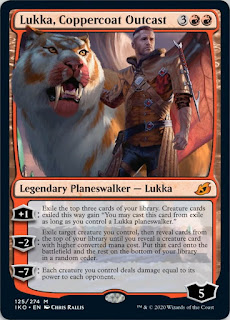 A new challenger has entered the fray. Who is this friend and why was he cast out of the Coppercoats? Us lore nerds will find out eventually. As a Red Planeswalker in a very creature heavy deck, he provides immense possible Card Advantage. His plus likely flips 1/2 creature cards if built properly. Being able to cast them for as long as he's around is somewhat of a downside with the obvious surge of play Murderous Rider will get, but the plus 'draws' you cards while the minus upgrades your creatures in a random manner like Cascade. If Gruul Monsters really becomes the deck we all want it to be, he may be the card advantage engine the deck needs, but his narrowness also worries my soul. 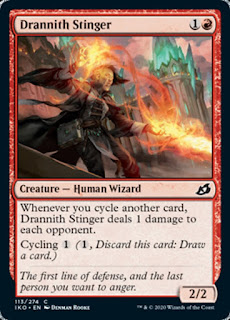 Cycling is back. The simple mechanic of pay a little mana, discard this card, draw a card is a mechanic dating back all the way to Urza's Saga and having it's most recent outing in Amonkhet. The logic to it being the set full of Monsters will need ways to move through your deck. You don't wanna stare down at the 8 or 9 mana big creatures in your hand and die, not being able to cast them. 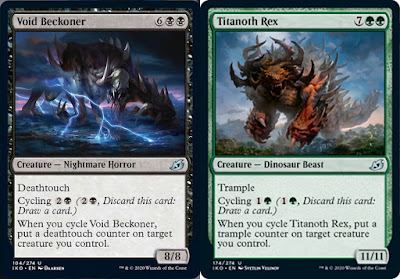 Prime examples of the beefy monsters on show in this set. An 8 mana creature and a 9 mana one will be trapped in the hand for a long time. Cycle them away for an easy pump - those counters give the keyword to your creature forever - and the previously shown off Wizard card will ping for a free damage.

With cycling coming back, I have to wonder about a format other than Standard. Obviously Commander decks that play Ancestral Slide or Lighting Rift will love the extra cyclers and Cycling payoffs. My brewing brain wants to think about Pioneer. Amonkhet block gave us a great many Cycling cards, but it also gave us New Perspectives. Might there be a deck similar to the current Lotus Breach deck that cycles its hand, Shadow of the Grave's it back to win lab-man style with Jace or Oracle? Nothing was stopping this from being a deck before, but adding the right extra load of Cycling cards might make the deck real. Just something to brew. 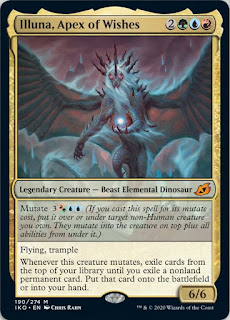 New Mechanic time. I'll admit readers, I've been playing this game for nearly seven years. I know it pretty well. This one took my brain some getting used to. The Mutate mechanic was sort of hinted at earlier in the year. Did anyone else notice, I did, I always listen to the Surgeon General Commander.

This is a new way to Voltron a creature, from what I can tell. If you cast a creature spell with Mutate, it enters on top of or under the Non-Human creature you're mutating. It has the name, and power/toughness of whichever creature is on top. The text box includes everything for each creature you've put together in your Crossbreed Labs. The creatures with Mutate all have a triggered ability when it Mutates - this ability triggers when you play it for Mutate and whenever you Mutate another creature into the pile. 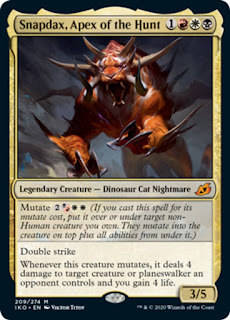 If someone were to destroy or make the target that you're mutating onto invalid, while the Mutate Card is on the stack, the creature enters as normal, not mutating onto anything, and not triggering the "When it mutates" trigger. This is good to make it stronger than Auras as you don't feel the blowout of getting it removed in response. I'm still unsure of the rulings, but once mutated, I think they're treated as one creature, meaning all the cards in the pile go to the grave when they die, or to hand when hit with Unsummon. I think. 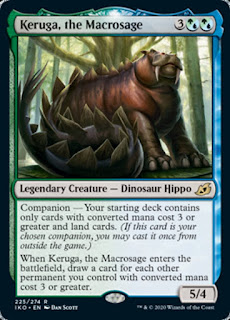 We are all powerful Wizards, so it's about high time we got familiars. The Companion mechanic is featuring on 10 Legendary creatures, one for each colour pair. Each Companion has a restriction for your starting deck, this friend says "no one, or two mana cards". If you meet that restriction, you reveal the Companion from your Sideboard, and you can cast them from the Sideboard, like the Command Zone. It's important to note that the creature can be in your main deck if you don't have the Companion requirement. They'll just be there for the stats and the abilities, just not available at the proper moment without drawing them. 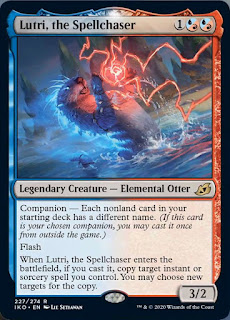 A moment of silence for Magic's first Otter, preemptively banned in both Commander and Brawl. There is no downside to playing this critter in every Blue/Red/X deck in either of those formats as card number 101. This little friend still lives in my heart and I will build a terrible Blue/Red spellslinger deck for him on Arena.