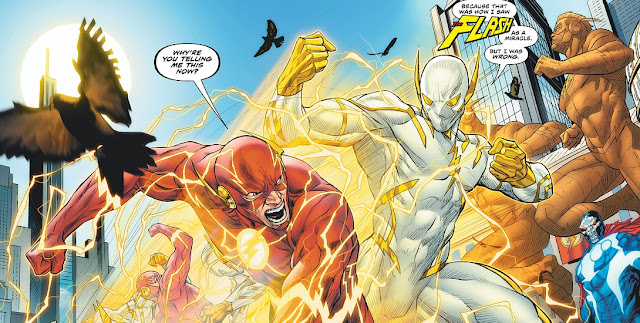 Review by Jim Bennett
The Flash #751 jumps straight into the action, following on from the end of #750 with Godspeed leading Barry to Paradox, who then forces the two speedsters to fight! Meanwhile, Iris is trying to find any info she can out about Paradox from Commander Cold in the Flash Museum, but all is not what it seems.

In a twist, August (Godspeed) then turns on Paradox to team up with The Flash. Sadly, even their combined forces aren’t enough to defeat the new big bad, and both are dealt with fairly quickly. Barry then gets caught in Paradox’s beam and wakes up in a field… with his mum?!?

While all this taking place, Iris discovers that they’re going to need help from the only person in time to ever defeat Paradox, The Reverse-Flash!

This issue was awesome! I love a full on battle in comics, especially when it involves speedsters, but with Iris doing her thing at the same time, it’s everything I love about the Flash! The artwork is great, as Christian Duce really gets Barry and August, so their looks are perfect. However, my favourite thing is how Iris is drawn in this issue, and the one panel where she’s screaming Barry is just amazing, giving us all the emotion you’d expect.
Overall #751 is a fun issue in this building story and really makes me want to read the next one. This is the sign of a great comic, so bring on The Flash Age Part 3!