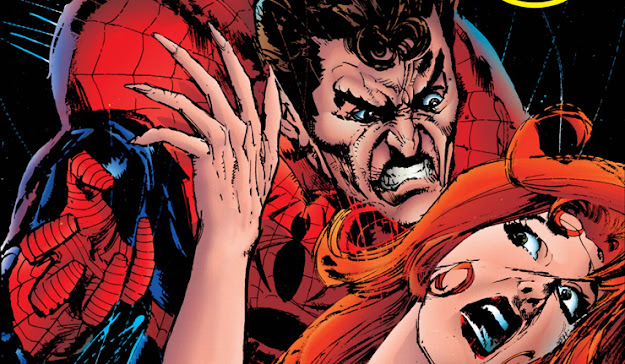 Remember when you felt uncomfortable with Peter Parker backhanding a pregnant Mary Jane across a room? Well get ready for two whole issues of that awkward feeling. "Time Bomb" is not necessarily a terrible arc. But it definitely is one of the more tone-deaf arcs of the Clone Saga.

According to then-editor Glen Greenberg, there was immediate fan backlash regarding the Peter hitting MJ. It apparently scared Spider-Man editor-in-chief Bud Budiansky into not wanting to portray even a hint of violence against women. So with that mindset, what the heck was the Spider-Man creators thinking by having a whole story about Peter attempting to murder his wife?

So Peter has nightmares of MJ being hunted by Kaine. He's also imagining the Jackal's face in things. But these are real. It turns out that before his death, the Jackal implanted hypnotic suggestions in Peter's head. 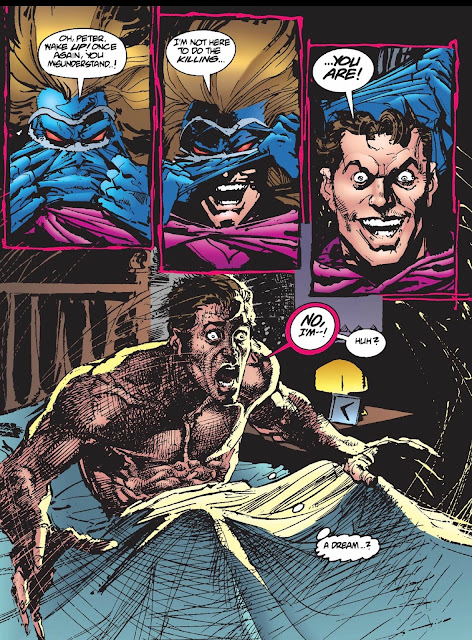 It's not explicitly stated, but I also assume this is how Peter was having a shared Kaine vision.

At the end of "Maximum Clonage", the Jackal said the key-phrase "When the dream ends, the nightmare begins" to trigger the commands. Now Peter's is compelled to kill Mary Jane. In case the opening scene was unclear, this is the resolution for the long-running sub plot where Kaine sees visions of MJ's death. It turns out the murderer is Peter! What a twist!

It's actually kinda unclear if that was the resolution of that story line or not because they did not spell it out for readers.

MJ finished up her modelling gig for maternity clothes. But when she returns home, Peter acts possessed-as if he can't control his body. He tells her to run because he's programmed to kill her. So she escapes and calls for help. 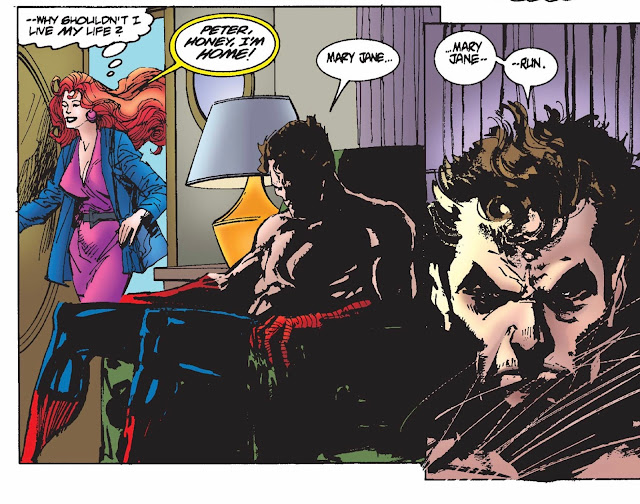 No, not the Avengers or the Fantastic Four. She calls the New Warriors! According to MJ, the other super-teams will escalate things and possibly hurt or kill Peter. But it seems more logical that an experienced team like the Avengers are better equipped to take-down Peter safely.

Truthfully, they shouldn't even have bothered with that explanation, because they already established a good one. MJ called the New Warriors to reach Ben-who joined the team in  their own comic. Despite Ben not being present, the New Warriors are at least alerted to a crisis and go to help MJ. 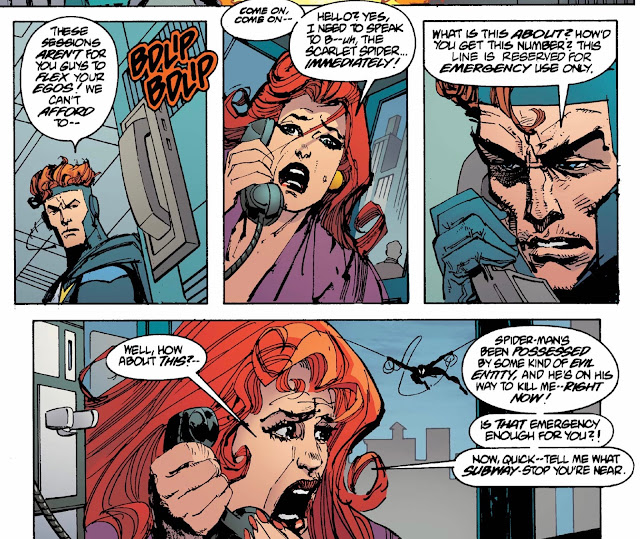 So MJ creates some distance from Peter via subway. But when she gets off, Spider-Man has already found her. Fortunately, the New Warriors are there to slow him down, allowing MJ to run again.

Spider-Man  makes quick work of the New Warriors. They barely were able to even lay a finger on him. This reminds me of when Spider-Man easily took-apart the X-Men in the original Secret War  series.

MJ eventually hijacks a taxi and drives all the way to Queens for her final gambit. She's in Aunt May's old house. She gambles that being in Peter's childhood home will trigger a strong enough emotional resonance to break the Jackal's hold. 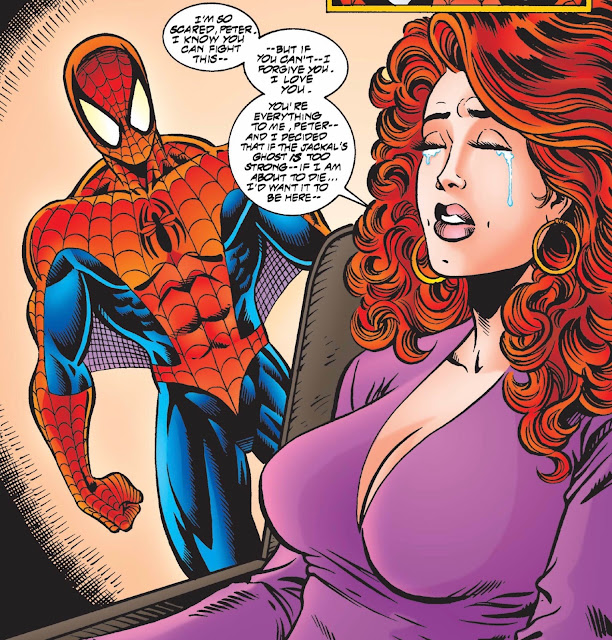 It works, and the Jackal's hypnotic spell is broken. It's kinda cliche and corny, but honestly I kinda liked the resolution. I think it's when MJ  admitted she's done running and is okay if she was murdered in Aunt May's home, as if she's made her peace with all the clone craziness from the past couple of months. There's something very real in her response. She's gone through a lot in the last few months, so it's not surprising if she's emotionally exhausted by all of it. The declaration does make her super ballsy, but also very emotionally insightful too. 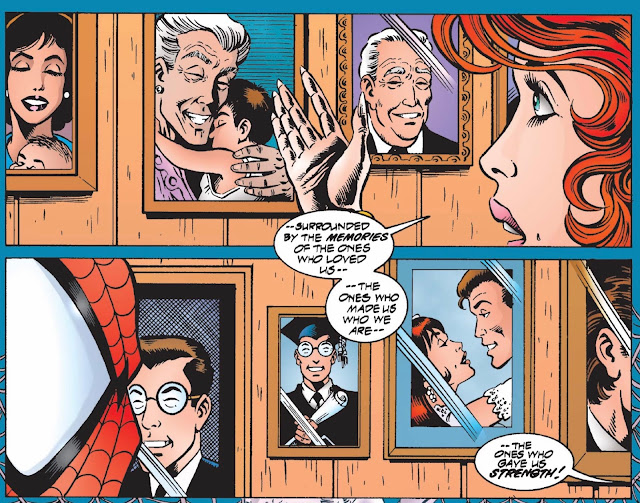 This is another filler arc more or less, because there is no forward movement on the main plot, which is "Who is going to be the new Spider-Man?". Although we finally resolved the MJ murderer plot line, it feels a little underwhelming. I think part of the reason is that Kaine is currently "dead" and was not able to participate in the climax. It  feels weird to finally have a resolution to the plot without him, since he carried the story line on his shoulders for its entirety.

Also, the New Warriors have yet another superfluous role. They don't contribute anything meaningful to the ending, so their inclusion feels more of an editorial mandate. Even Ben doesn't really do much. Still, I like the ending, even if it's cliche, because it really shows MJ's character well.

There's also that really uncomfortable visual of a clearly pregnant-looking Mary Jane fleeing for her life, while Spider-Man is behind her screaming how he's going to kill her.

Funny anecdote, according to Greenberg, "Time Bomb" was designed to explain why MJ and Peter would want to move out of New York and let Ben take over as Spidey. Except, there was no compelling reason in the story arc that would force them to make that decision. It seems like a lot of Clone Saga stories have goals or ideas, but fail in the  execution. 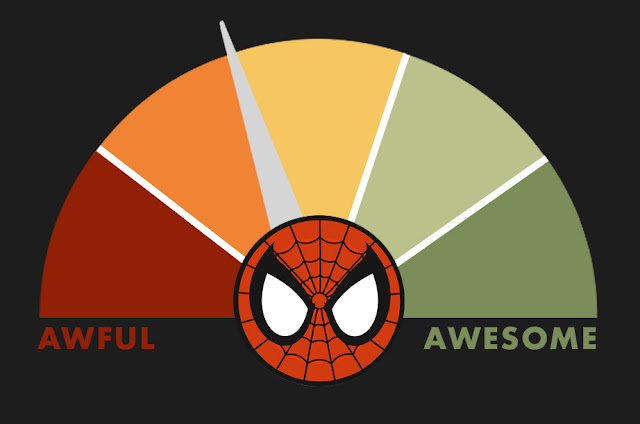