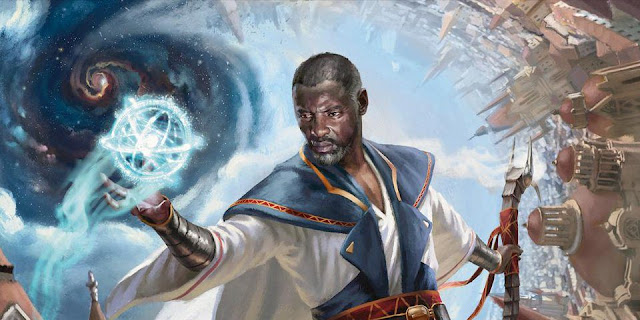 Farewell sweet prince. Too pushed for this world.

Today, 3rd of August 2020 marks one of the greatest blindsided mass murder incidents since Game of Thrones' Red Wedding. To those who haven't seen it on the mothership, look no further. 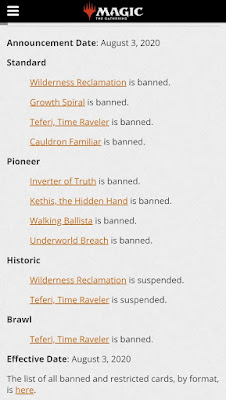 Without notice or warning, the heaviest hitters and combo pieces for the premier format's metagames were struck down. No one saw this coming and I'm still flabbergasted. The full article goes into detail as to their reasoning for each banning, and for that I can't deny their logic.

In short, due to The Backstreet Boys selling out every arena in the universe, Wizards has made a conscious effort to watch all the immense online play going on currently. The considerable play of Standard, Historic, and Brawl on Arena with Pioneer on MTGO. The Standard cards are all very, very, very prevalent. The just ended Player's Tour finals are further proof of that, and high level play always affects the metagame at large.

The banning of three cards which are set to leave Standard in just over one month is a surprising prospect. Many were fully prepared to wait until the release of Zendikar Rising. Not so. The increase in online play means those in charge of maintaining the metagame want to see a change of health now, while the Backstreet Boys keeps play online instead of paper. 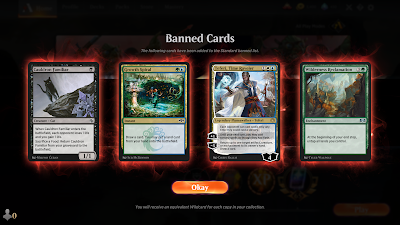 With regards to Pioneer, a format I personally dabble with but do not play much, I can see every banning's validity. The article states that Combo decks are very prevalent. The cards banned are all centre-pieces for their respective combos. With them removed, Breach can't cast their entire graveyard, Kethis can't cast their entire graveyard, Ballista can't blast people down with Heliod's help. To my absolute sadness, Inverter has hit the chopping block, but that simply means I'll just play Tempo again.

With such a short time left on Standard, the format feels brand new again. Ramp as an archetype is severely cut down with no Growth Spiral. Cat was banned simply to prevent Sacrifice decks filling the void in the metagame that Ramp and Reclamation left behind. The absence of Teferi means that Flash variants and Draw-Go Control may be a viable archetype again.

This is the brave new world nobody was expecting, but upon reflection, everyone appreciated. For the original Banned and Restricted article, read it in full on Wizard's website here.
Adam B Ray Adam Ray Adam's Dragon Cave Magic Magic: The Gathering Magic: The Gathering Arena