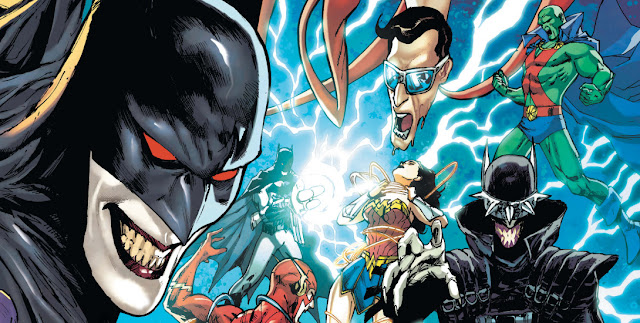 "Legends Of The Dark Knights" 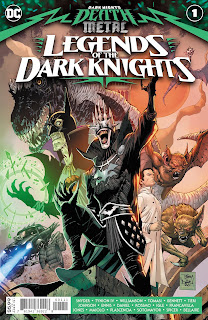 I’ve said, on many occasions, that no-one does an anthology like DC Comics. Their latest, Dark Nights: Death Metal – Legends Of The Dark Knights, helps prove my case.

This issue serves both as a brilliant companion to the ongoing Dark Nights: Death Metal series, but also works as a standalone single issue, that will thrill and entertain, shock you, horrify you, and make you laugh.

What more could you ask for?

In Death Metal #1 Wonder Woman seemingly killed The Batman Who Laughs, with an invisible, golden-lasso powered chainsaw, no less. In issue #2 we found several FrankenAlfreds transferring the villain’s brain into the body of yet another Dark Universe Bruce Wayne, possibly the strangest yet. Watchmen fans, quake in terror as we meet Doctor BatManhattan!

In a world where Bruce Wayne uses the power of the Watchmen Button to duplicate the accident that created Doctor Manhattan, we meet what could be the most powerful Dark Knight of them all. What could be scarier than that? His body, but with the brain of the Batman Who Laughs (TBWL)!

This new Darkest Knight has me quaking in my size tens!

Scott Snyder, James Tynion IV and Joshua Williamson show TBWHL’s rebirth, and give us the amazing origin of BatManhattan in the first tale in this collection. It’s phenomenal. The line art by Tony S. Daniel, beautifully colored by Marcelo Maiolo and lovingly lettered by Tom Napolitano has me fearing that this new, Death Metal Universe, may be here to stay. 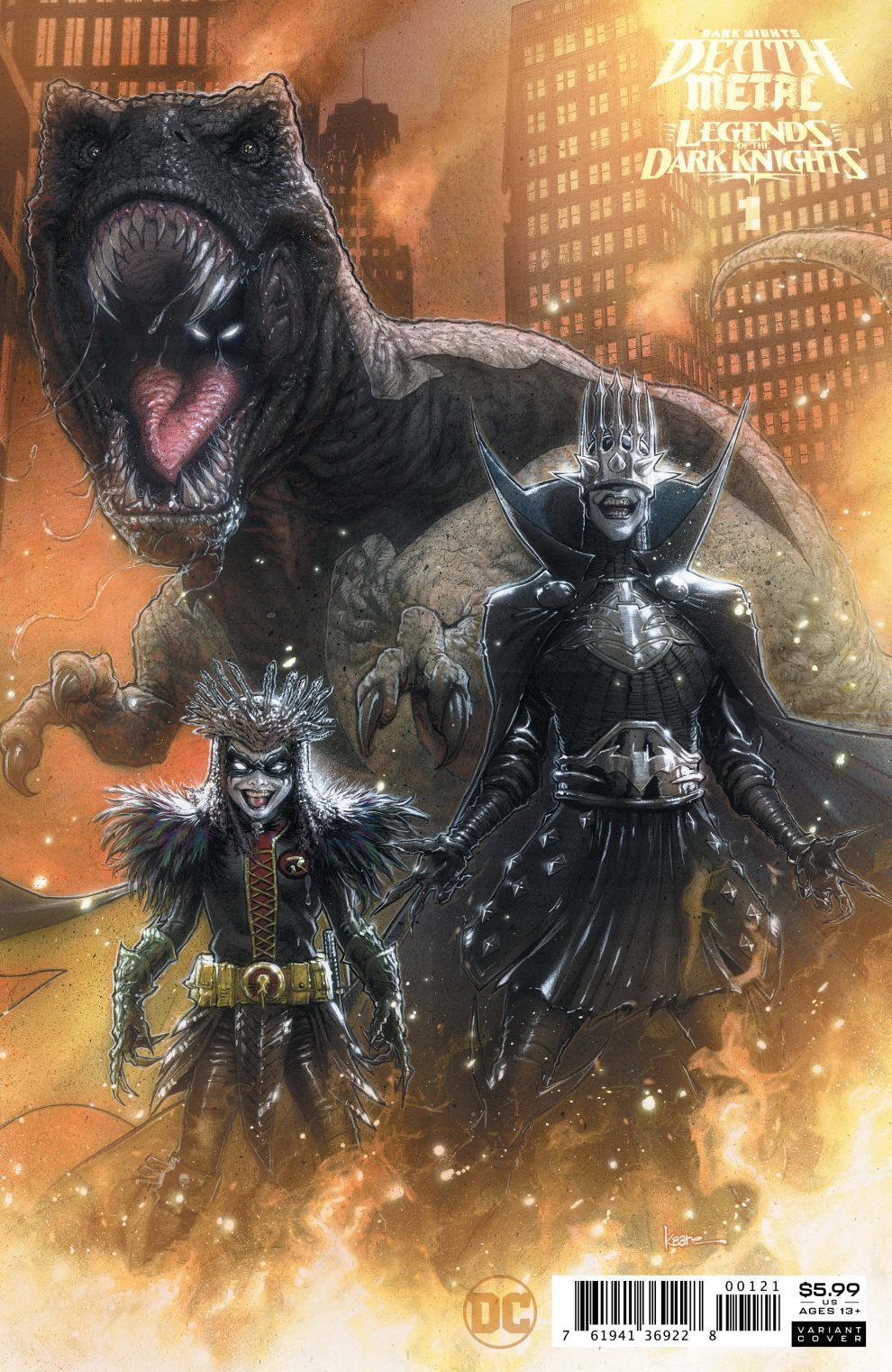 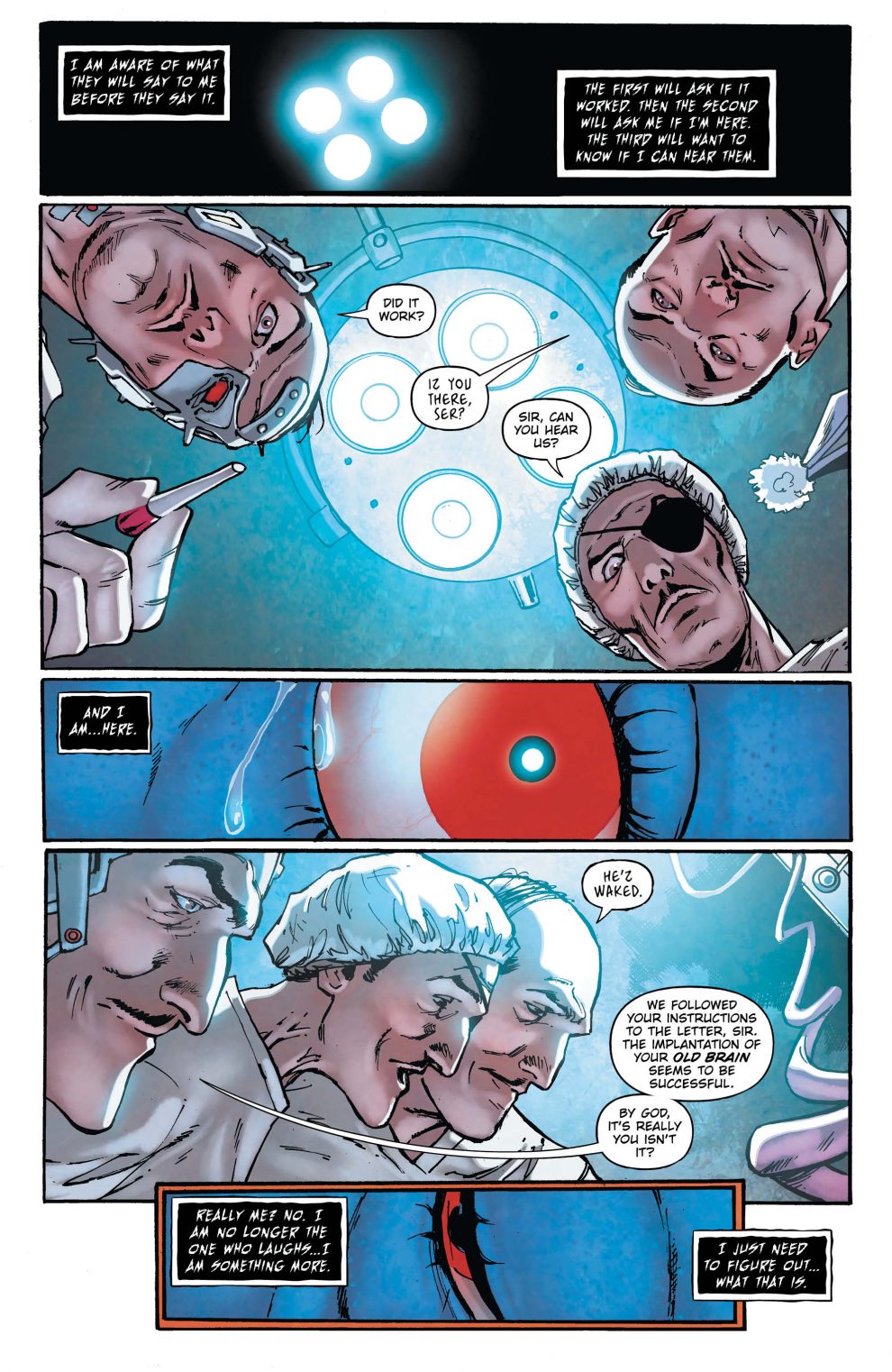 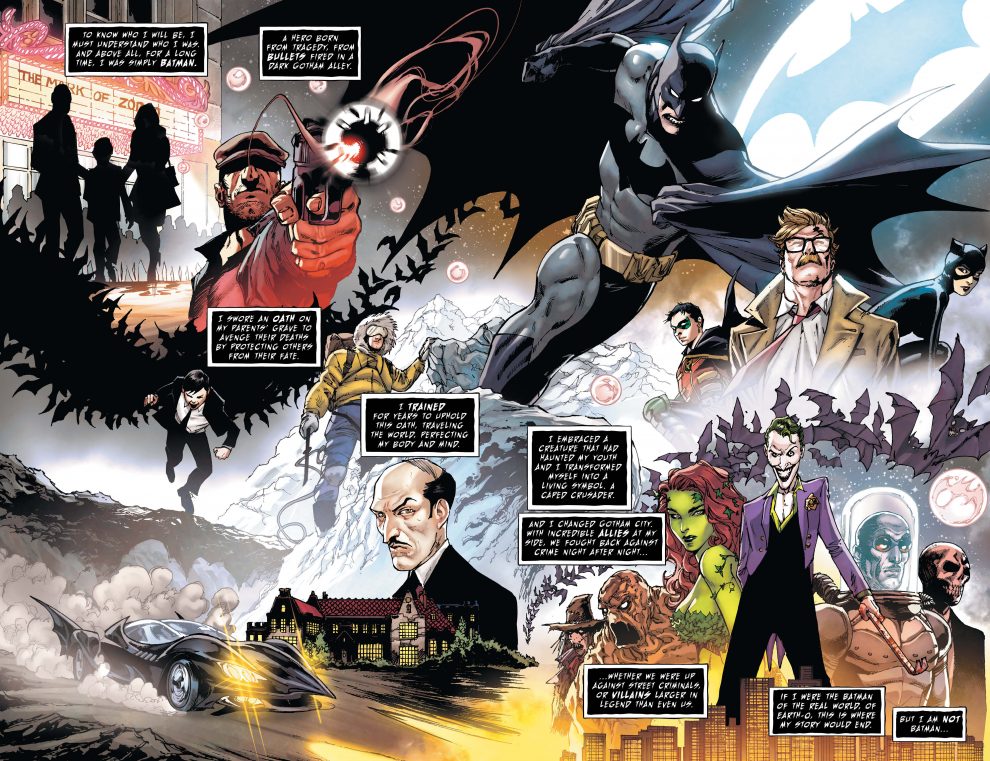 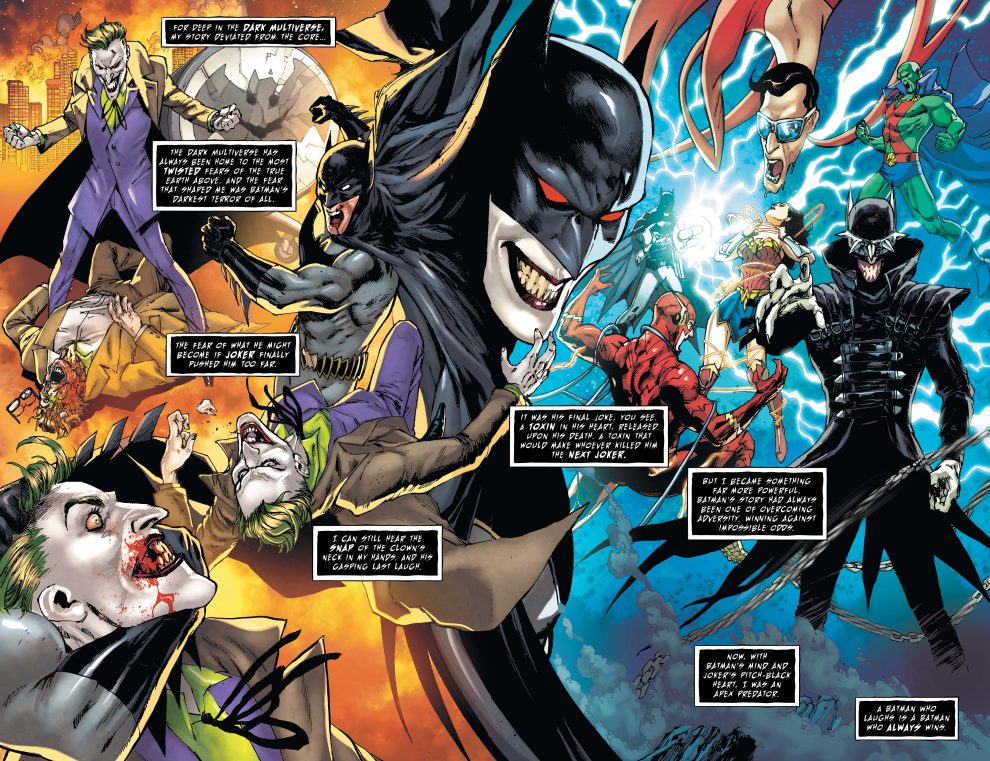 A Universe Of Knightmares

If you thought that The Darkest Knight is terrifying, then The Robin King will scare you witless! The second tale is a first rate horror story, written by Detective Comics‘ current scribe, the brilliant Peter J. Tomasi. If the IgorAlfreds weren’t heartbreaking enough, the Pennyworth narrating this tale makes me miss our dear, departed butler more than ever. The Bruce Wayne of this universe makes Damian Wayne look like Mickey Mouse! Riley Rossmo’s nightmarish, cartoony style raises the chill factor, and the colors and letters by Ivan Plascencia and Rob Leigh dial the terror up to ten.

Writers Marguerite Bennett, Frank Tieri and Daniel Warren Johnson then give us the origins of Castle Bat, Batmanasaurus Rex (B. Rex) and the BatmoBeast. A living fortress/Batcave, a sentient Monster-Truck Batmobile and Bruce’s T-Rex, but with all his knowledge and training. These Batmen are the works of some next level imaginations!

Beautifully drawn by Jamal Igle, Francesco Francavilla, and Daniel Warren Johnson himself, these mini-stories deliver huge entertainment, but in tiny, powerful packages. The colors by Chris Sotomayor, Francavilla and Mike Spicer elevate the line art, and fit perfectly with the overall tone and style of the book. As always, the letters by Dave Sharpe, AndWorld Design an Rus Wooton are distinctive, yet work well with those of the artist the precede, and follow them.

Hit Me Baby, One More Time

The final tale could only have been written by Garth Ennis. Only the man who gave us Jesse Custer, the Saint Of Killers and @$$face could think up a Batman as, um, er… out there, as Baby Batman. Joëlle Jones, alongside color artist Jordie Bellaire, and letterer Rob Steen wrap up the book in style.

Baby, that is one real, gone, kid.

Horror, superheroics, fun, and fantasy… Dark Nights: Death Metal – Legends Of The Dark Knights has it all. Sometimes tie-ins and spin-offs are an unnecessary expense, not so with this book. Reading it directly after Death Metal #2 is extremely rewarding, and highly recommended. This extra issue is a must buy.