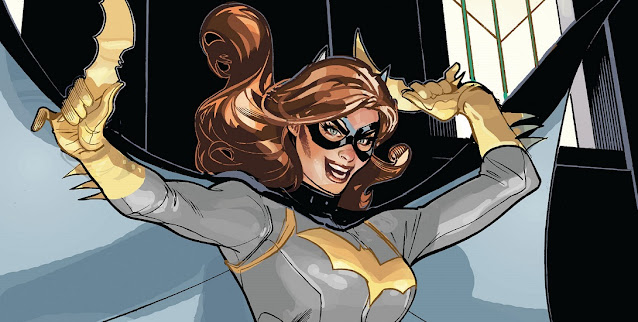 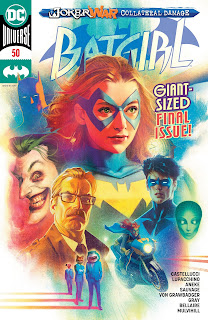 Not only do you get the epic final conclusion to this run, we also get some amazing short one-off stories at the end. So, please come and join me in this world of pure AWESOMENESS. Batgirl #50 has arrived.

Yes, it’s finally happened, and I’m going slightly mad! The day is here, the end is nigh, and I’m totally procrastinating because I don’t want it to end! This is something I’ve simultaneously been making grabby hands at, and dreading with every inch of my being. The unbelievable way Batgirl #49 ended made me shiver with anticipation. Not even The Joker could stop me picking up the last issue of this run. If that wasn’t enough to sway you, this is an extra Giant-Sized goodbye.

Batgirl And The Battle For Herself

Lately we’ve seen that both Barbara and Batgirl have been struggling to find their purpose. Not sure how to deal with her home life, her tense relationship with her father, and the recent events concerning her brother, Barbara turns to Batgirl to light the way. Unfortunately, our hero hasn’t been getting much love from Gotham lately either. Feeling uncomfortably out of tune with her purpose, you can only guess at what Cecil Castellucci had planned for our heroine in Batgirl #50; she really had to give Babs a great reason to continue being the one and only Batgirl.

Everyone comes to a time in their lives where they need to “find themselves”, and carrying on is something that they’ve been feeling lacklustre about. Over the past couple of issues, Cecil has been ramping up to something for this final chapter. As readers, I think we were all hoping for a happy ending, while still being aware of the possibility that the story may have a more sinister conclusion, like the one we experienced last month.

This might be the last time I get to talk about Cecil Castellucci for a while, so here comes the praise. Everything she’s done with this character and storyline has been amazing. From start to (we’re very sad about it) finish, Cecil’s run has been nothing but intense plot twists, emotional scenes and pure justice. Whether it’s Batgirl kicking serious butt and helping the people of Gotham, or Babs standing up for the general public in her day job with Congresswoman Alejo. I always knew that in Batgirl #50 Cecil’s version of Batgirl would be strong, thoughtful, caring, astute, independent, intelligent and formidable. Barbara’s no longer a victim of what happened to her, she uses her inner strength to show the world, and the villains of Gotham, that she really is the best of the Bat family. 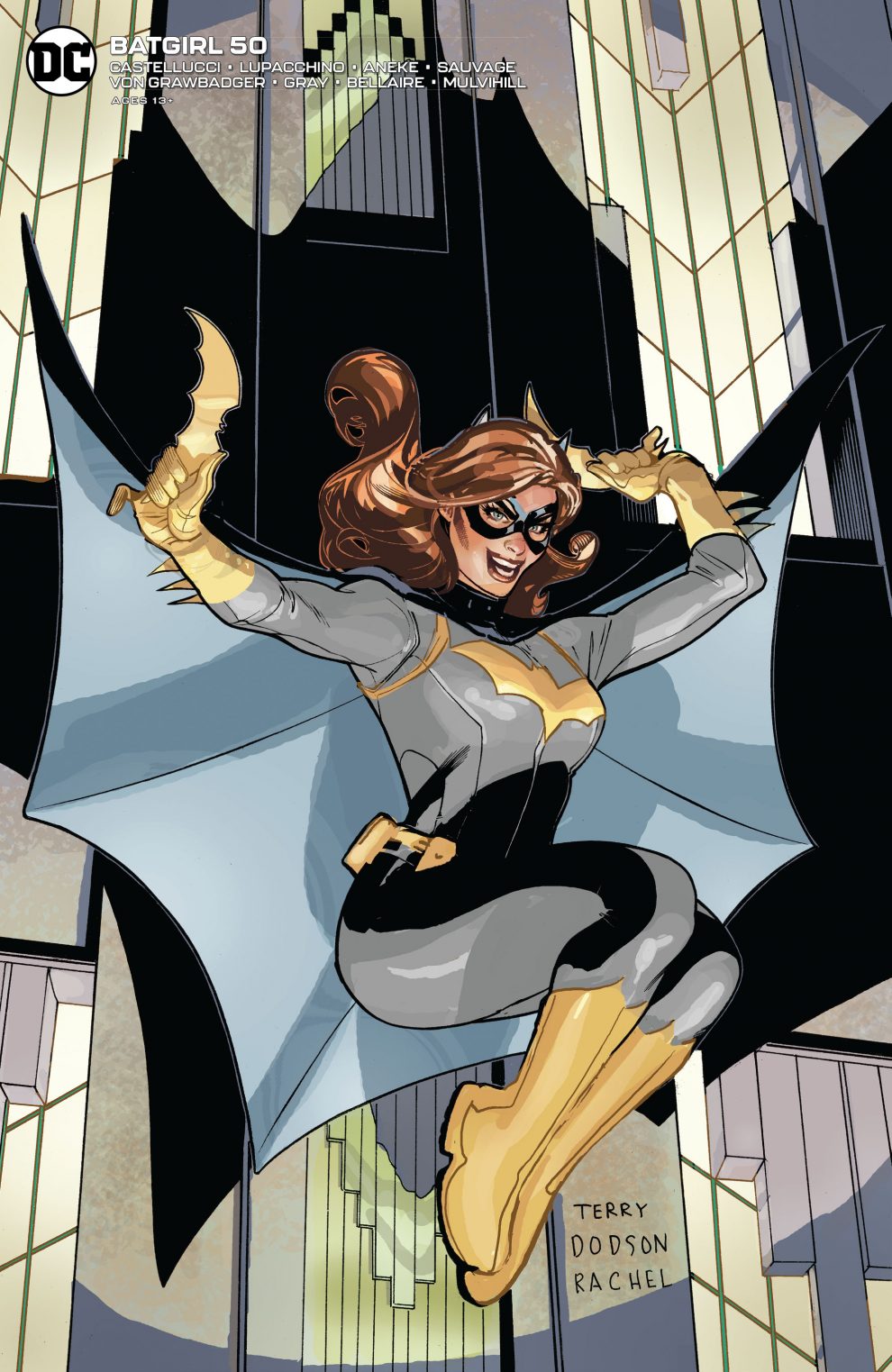 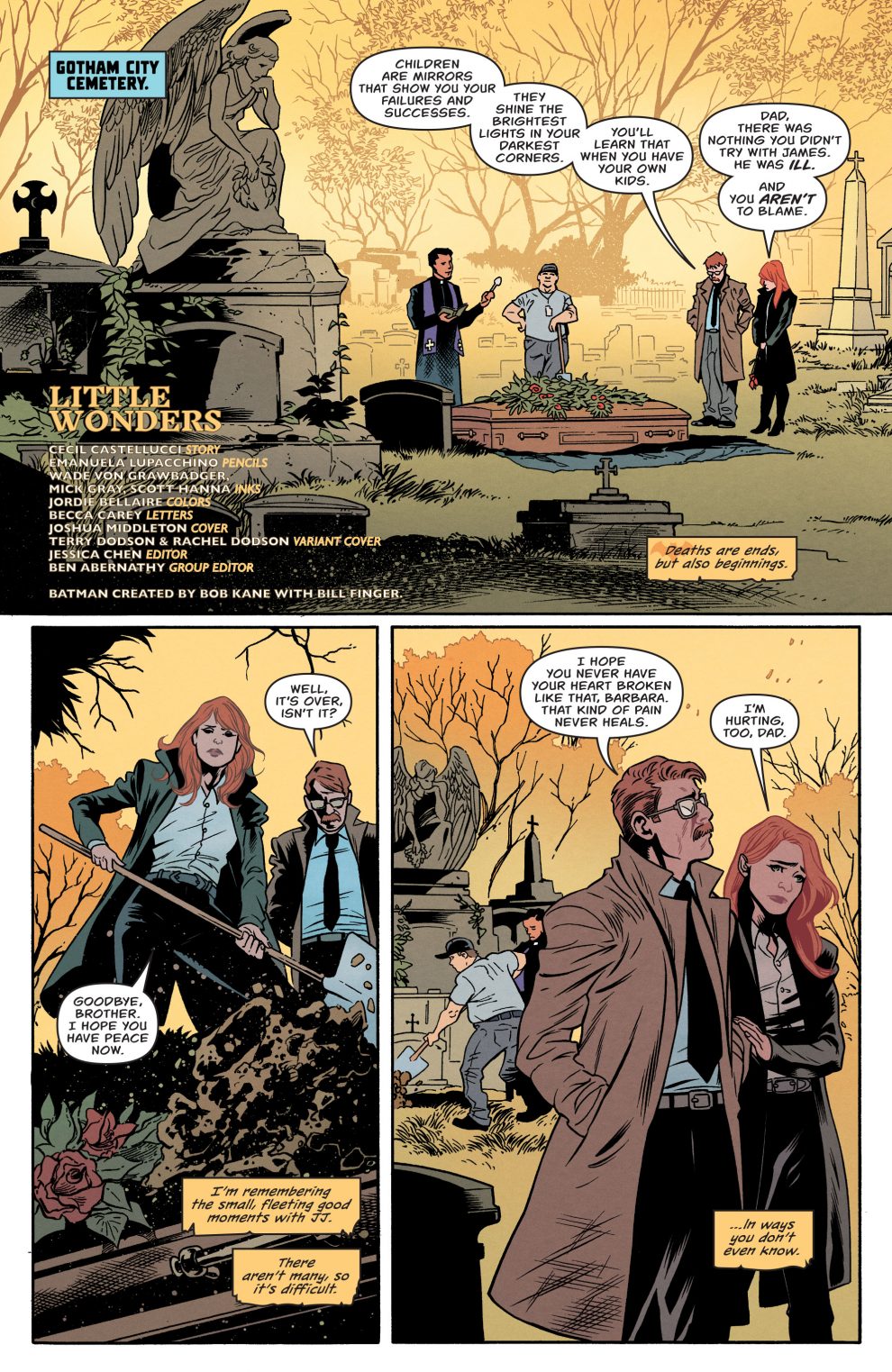 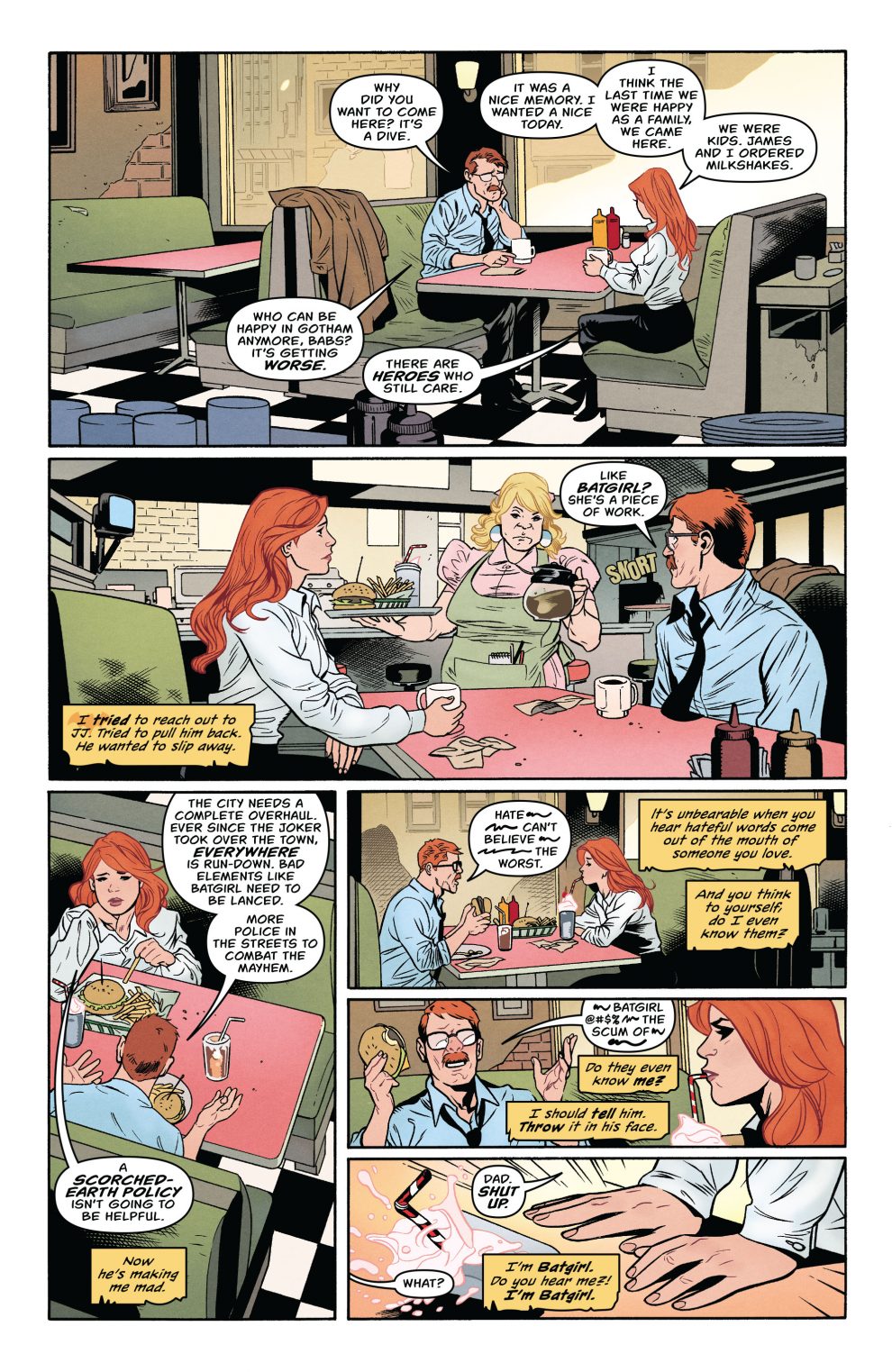 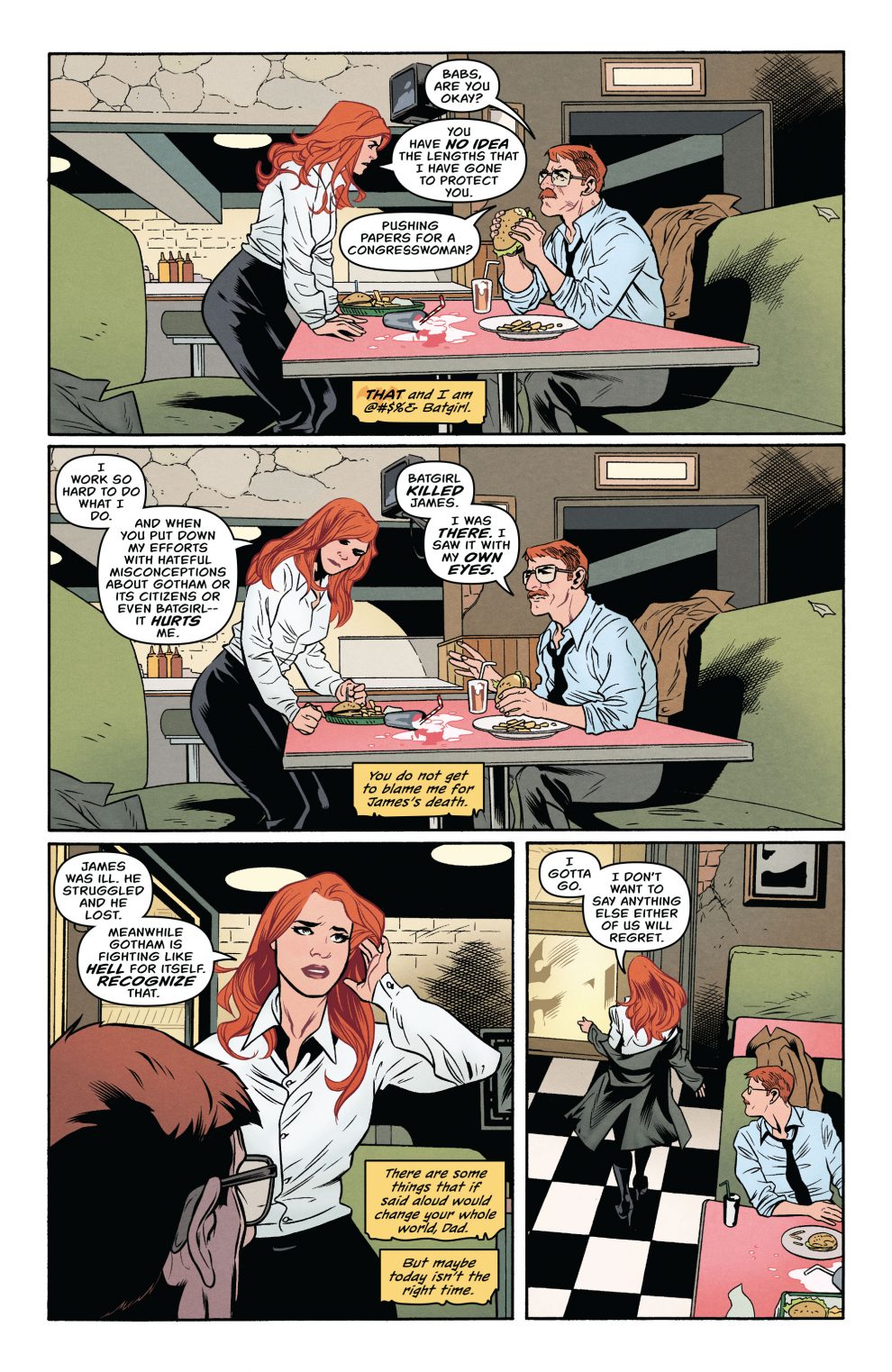 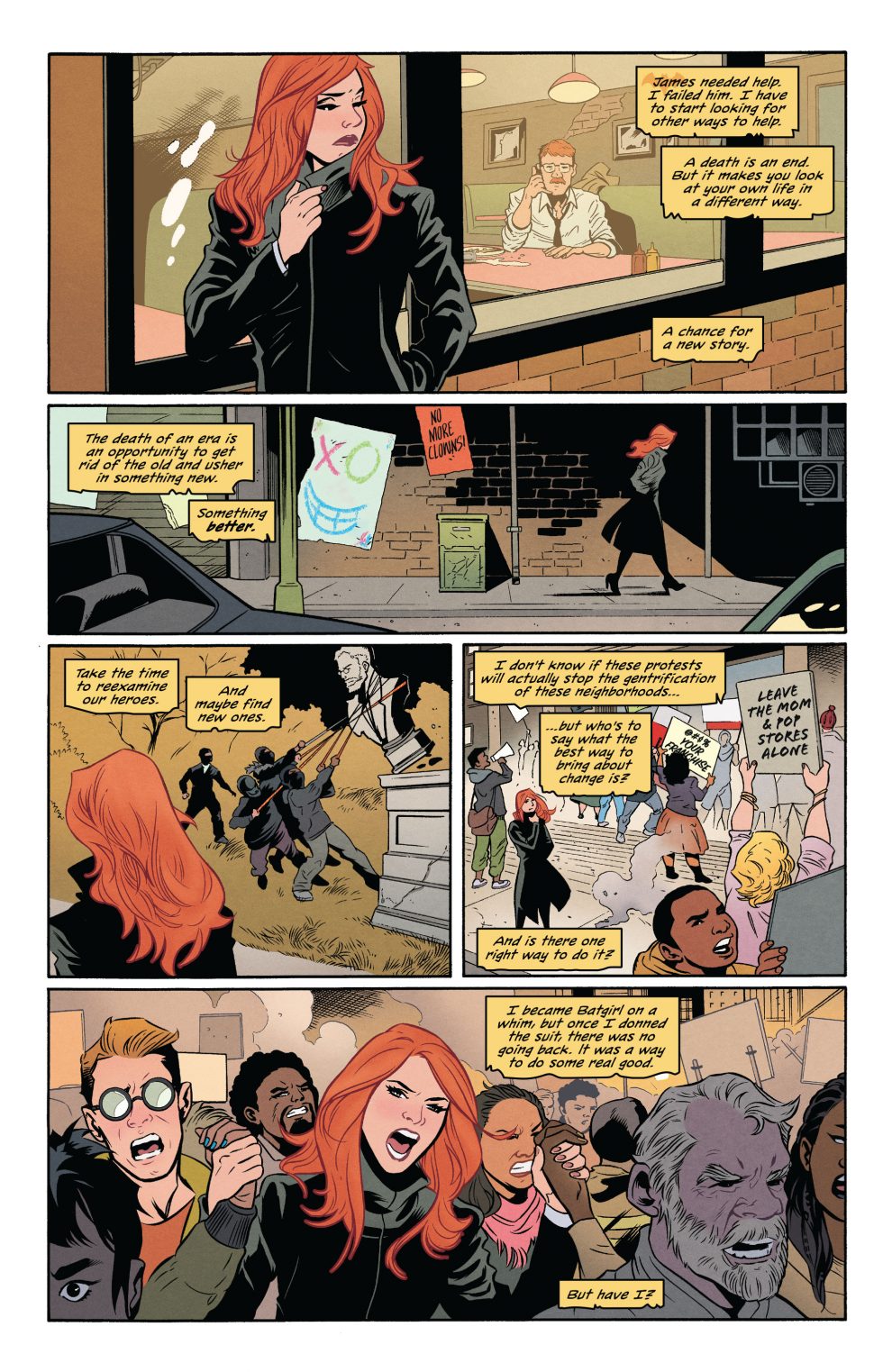 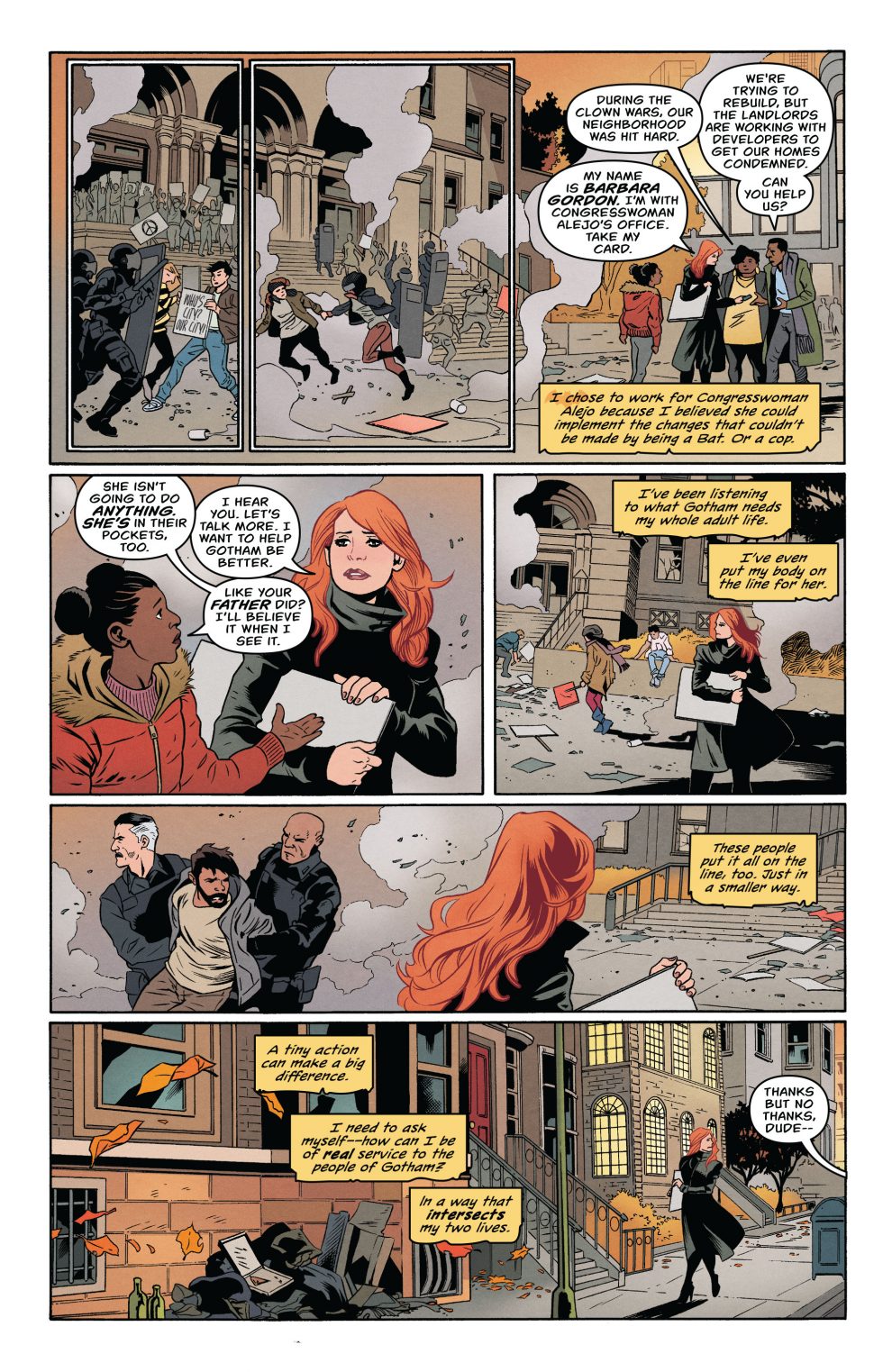 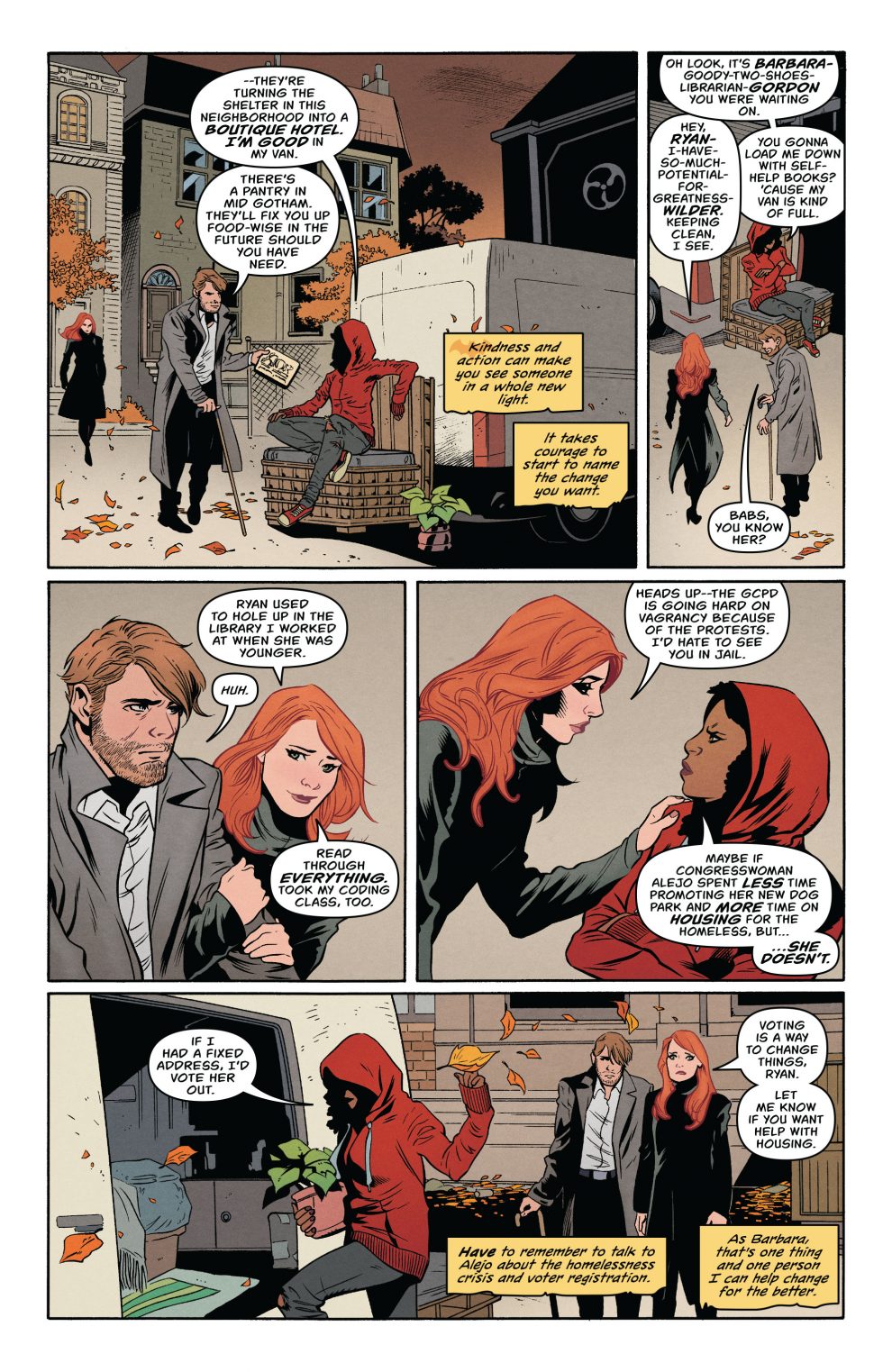 Having had the honour of conducting an interview with Cecil, alongside the DC Comics News team (watch this space), I know how much effort she puts into her research. The forethought of how Barbara’s apartment is laid out is just one great example. Cecil talked to us all about how she talked with the artist to make sure everything was spaced out enough to be able to get Barbara’s wheelchair through, even down to making sure there where still easy to reach bars and handles all over the apartment. Cecil’s brain must be an amazing place to live if her run on Batgirl is any indication. The things Cecil Castellucci has done with this character are outstanding. I can also confirm, due to the interview, that Cecil is very happy and content with the way she’s left Batgirl’s story. I like to think that the fans will be too.

The Many Stages Of Batgirl

The artistic team on Batgirl #50 was immense. There were so many amazing talents working on this issue, it only makes sense that it would turn out stunning in every panel. You might think it hard to collaborate with a group of people, but clearly this talented bunch didn’t have a problem. The images are works of pure mastery, with so much going on in each panel. The emotional range that you see Batgirl go through is nothing short of every emotion in the book. This is shown clearly and brilliantly by the artistic team of Emanuela Lupacchino, Wade Von Grawbadger, Mick Gray and Scott Hanna.

I also have to praise color artist Jordie Bellaire. The use of shading and highlights is amazing, particularly in the more emotionally wrought scenes. It all brings the eye to the correct point in every panel, and lets you move out from there to take in everything else around it. This might sound a bit weird but, for some reason, I really love the tonal color of Barbara’s hair when colored by Jordie. There’s just something extra… Batgirl about it.

Extra, Extra… Read All About It

We get two amazing extra stories at the end of Batgirl #50. I couldn’t leave without talking about them. Both written by the great Cecil, with art by Marguerite Sauvage in the first, and Aneke teamed up with Trish Mulvihill on the second. Having completely different stories, the difference in art style was welcome and super interesting. With such talent from everyone on the team we got two smashing, short one-shot stories to wrap up our Batgirl saga. I was more strongly pulled into the second, because of the premise… that and the fact that we get some extra special guest stars! You don’t want to miss it!

I’m so incredibly sad to see the end of this series, yet so calm and tranquil with the way Barbara Gordon’s story has been left. Batgirl has been through a lot in the last few issues of this run, and I think it’s time for a well deserved rest. Cecil, in my eyes you have now become one of the masters you researched when you started writing Batgirl. From all the fans who’ve read, and those who have yet to to read this ending run of yours, congratulations and thank you. You’re now a part of Batgirl’s history. The next time she comes back, someone will be looking to your work as a jumping off point, and they couldn’t have a better place to start.

Now to the heroine with the red hair and the feisty attitude; keep kicking butt, keep being everything Gotham needs and everything you want, and never stop standing up for what’s right. Be the Batgirl we know and love. We’ll see you soon.