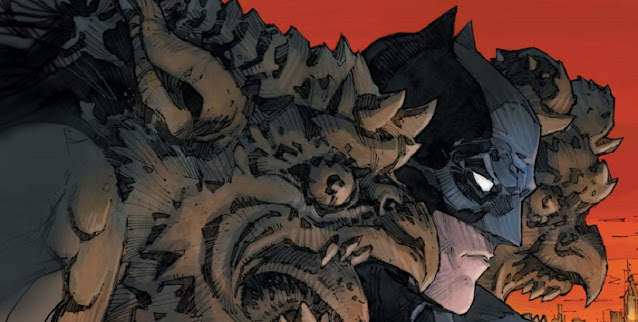 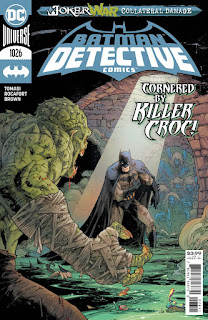 Knowing what we know about the landmark Detective Comics #1027, I came into this issue knowing that it would be a one off-story. While there are some fill-in issues that feel rushed, and come across as little more than stop-gaps, others are far, far more; standalone stories that encapsulate just how much can be told in just 20 pages. Detective Comics #1026 is very much the latter. Coming from the imagination of a seasoned veteran like Peter J. Tomasi, that should come as no surprise.

This issue packed a wallop, both physically, and emotionally. I truly expected a completely different outcome, but Tomasi quashed those expectations. The best part is that he did it in a way that was a complete pleasure, and total surprise. I don’t usually find suppressing the urge to give away spoilers that hard, but this comic goes so against type, that I almost want to. Peter J. Tomasi has given me possibly my favorite Killer Croc story of all time. The action is almost non-stop, but – more importantly – his character work is sublime, honest, and inspirational. 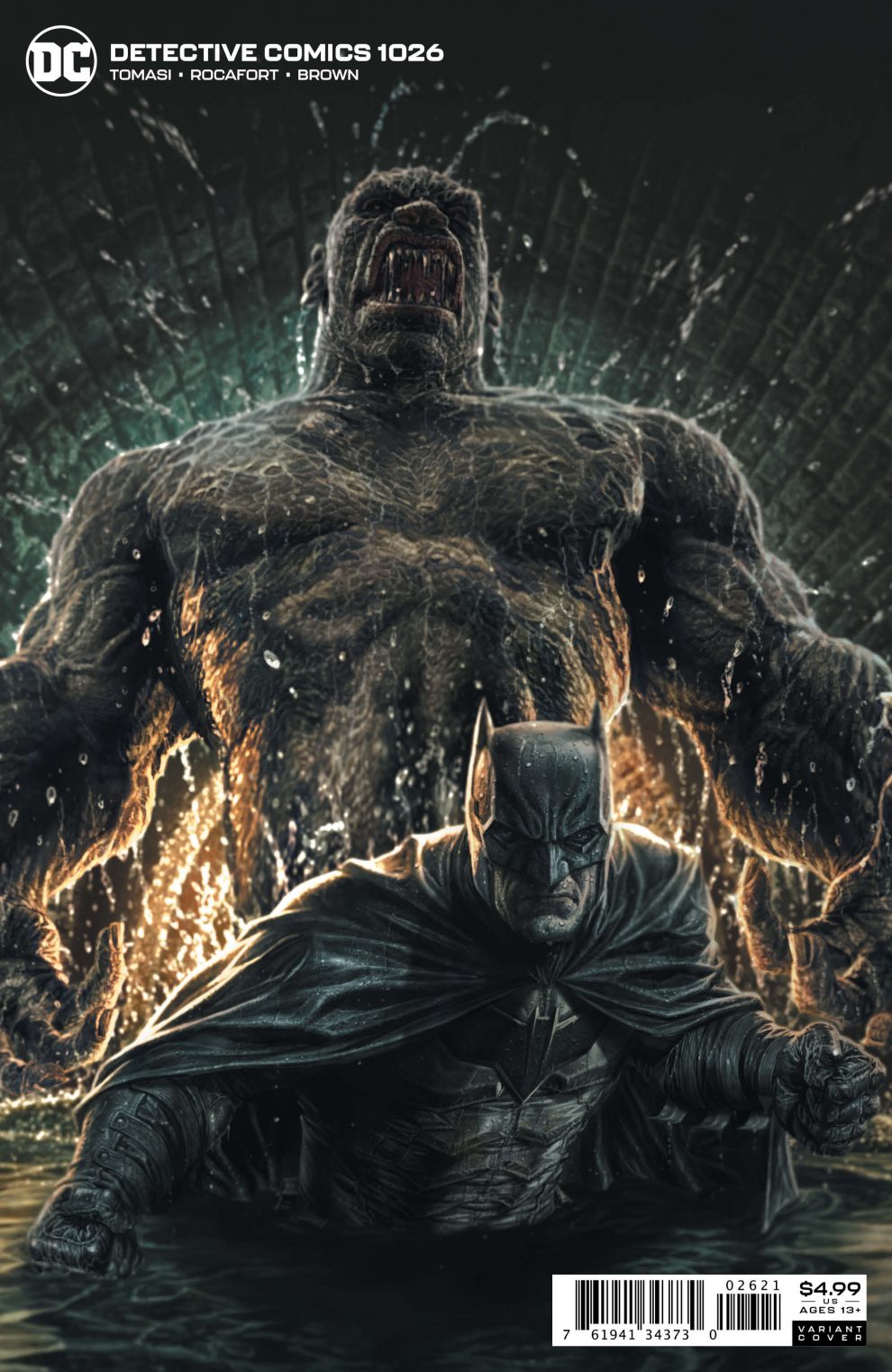 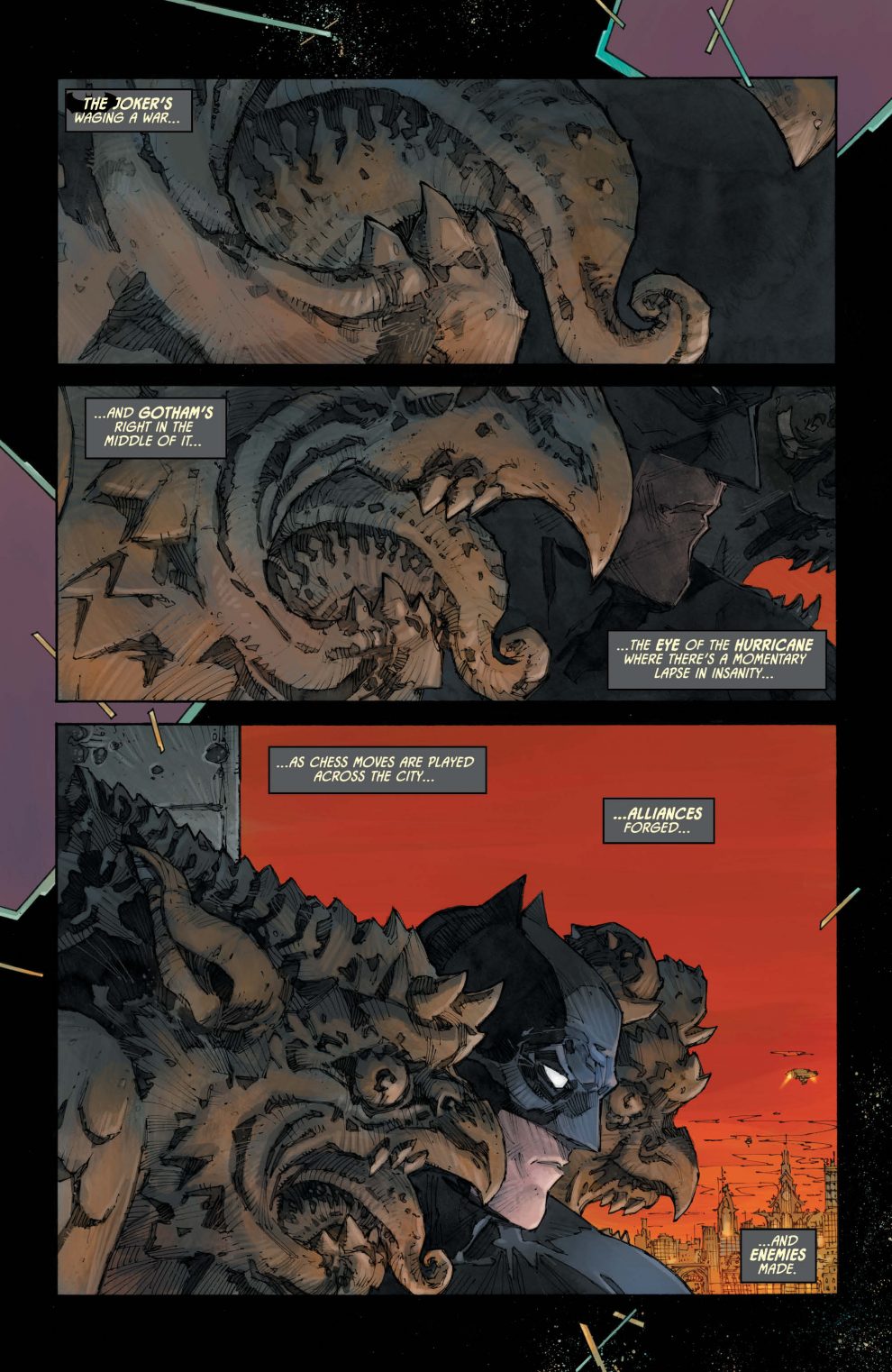 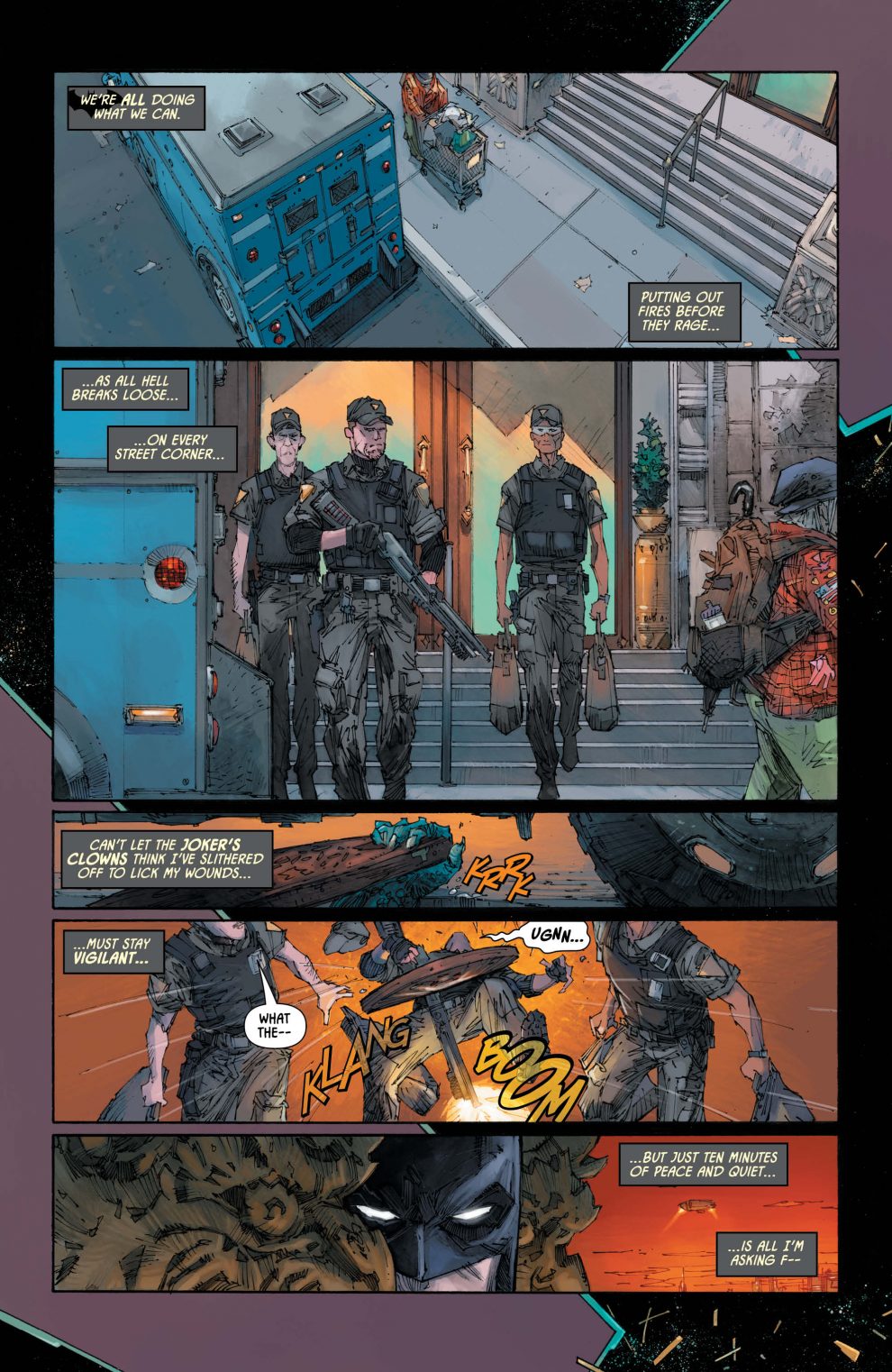 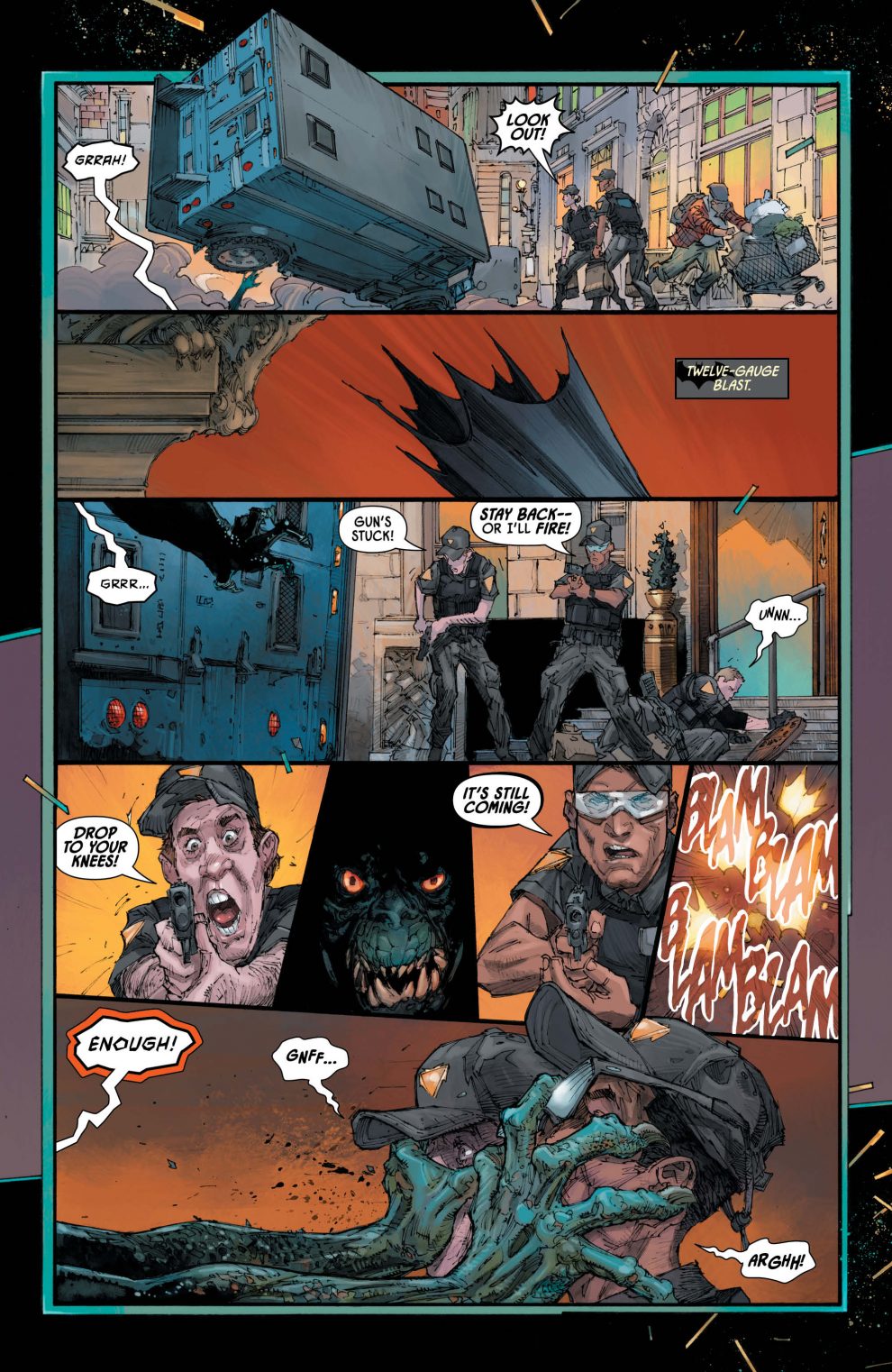 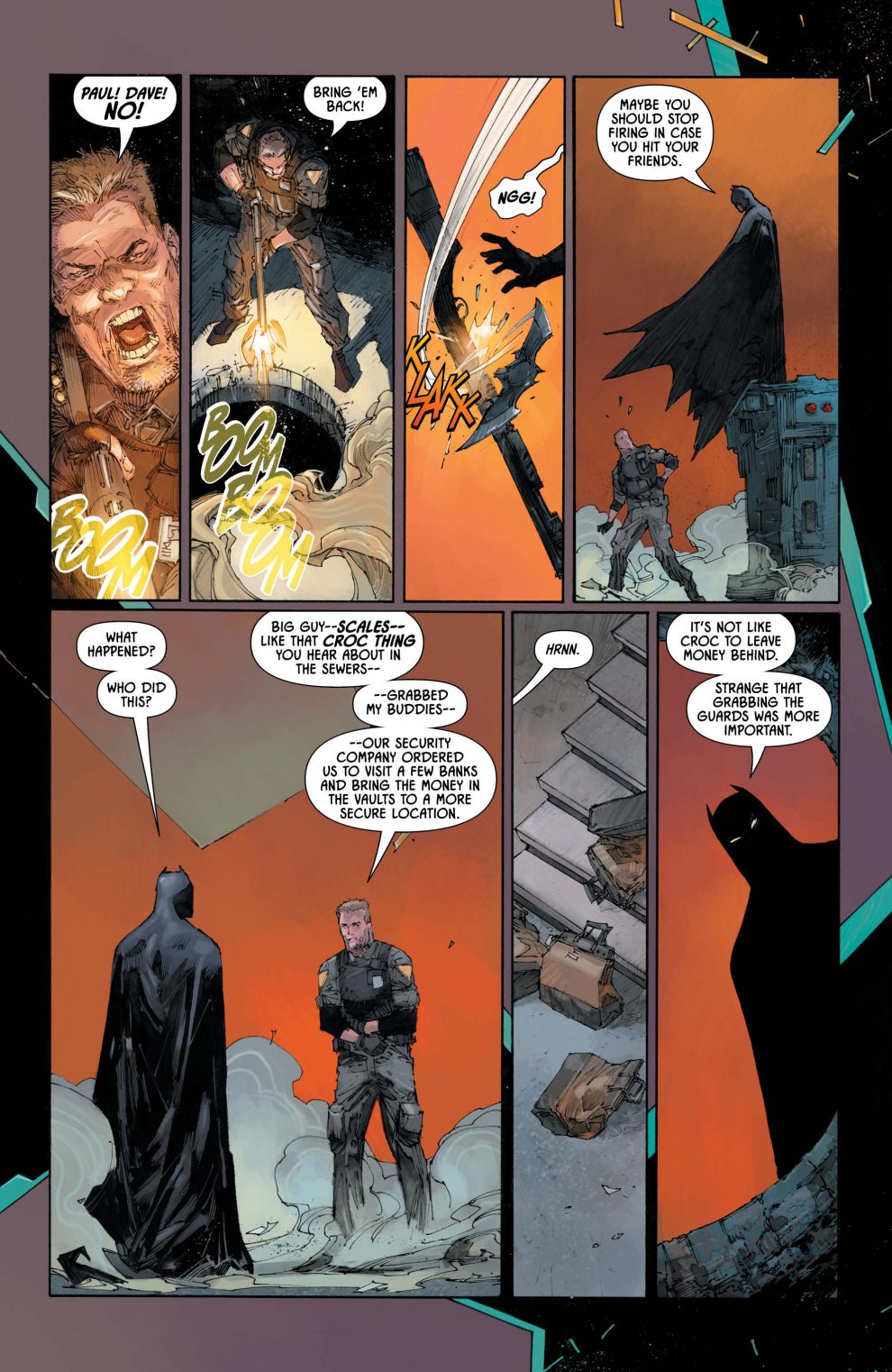 I must talk about the lettering in this issue. Not only has Rob Leigh managed to do his work without smothering Kenneth Rocafort’s stunning visuals, he’s given Croc and Batman unique voices, and also laid down some terrific sound effects. Daniel Brown’s color art, all reds, browns and greys, adds to the gritty atmosphere too. The visuals in this book are brilliant, so good that you almost wouldn’t believe that it was the work of three men, that’s how cohesive and organic it feels.

There’s a simple image – Page 4, panel 3 – where the line art is all shadow, apart from a spark of color from the sparks of a batarang, and the KLAKK sound effect of the weapon hitting a shotgun. All three aspects come together perfectly as one. This simple panel would look nice in black & white, but Brown’s color choices and Leigh’s sound effect lift it, making it so much more than it would’ve been otherwise. The slow reveal of page one is also a thing of beauty.

I wasn’t expecting much from Detective Comics #1026, much less a gorgeous standalone tale that I’d be happy to recommend to any bat-fan. We get a Dark Knight who’s a real hero, not just because he can kick butt, but because he cares, he listens… and he learns. I foresee great things in the future for Waylon Jones, and I hope it’s Peter J. Tomasi who gives us those stories.