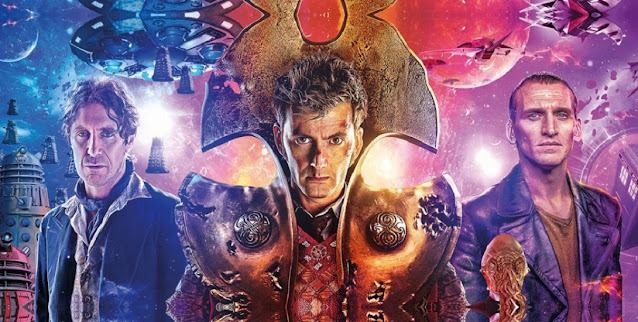 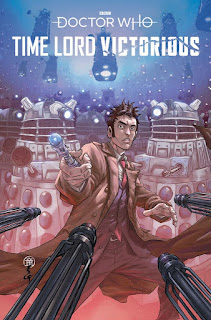 Doctor Who: Time Lord Victorious #1 is a new comic adventure for the Tenth Doctor, that sees the return of the Doctor’s most iconic enemy, the Daleks! When he faces his ancient foes once again, it soon becomes clear that things aren’t what they seem – time is all wrong, and something’s coming that terrifies even the Daleks! 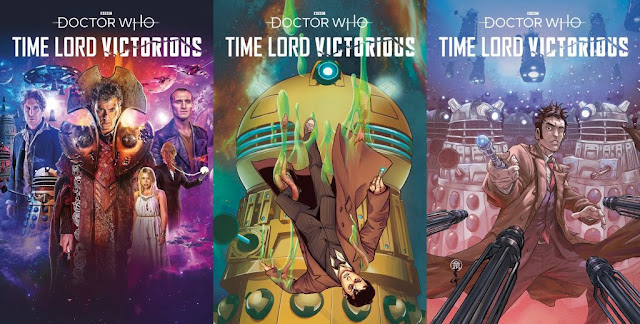 The Time Lord Victorious is a saga being told across audio (digital, and vinyl), novels, comics, immersive theatre, escape rooms and games. The adventure will tell a new and untold saga, set within the Dark Times at the start of the universe, when even the Eternals were young. The story follows several Doctors across space and time as they defend their home planet from a terrible race.

Hot on the heels of his recent team up with the 13th Doctor, in her series, Ten hasn’t yet reached his so-called victory over time yet (See “Waters Of Mars”, and “The End Of Time” Pts. I and II, the last stories in David Tennant’s run as the Doctor). What we see here is still the happy, go lucky Time Lord who has yet to feel the lure of the tremendous power that comes with mastery over all of history; past, present, and future.

Of course we still have a script by the wonderful Jody Houser, someone who really gets the character, in all his incarnations, and the same art team from the four issue team up story.

The color and effects by Enrica Eren Angiolini with Shari Chankhamma are gorgeous. These talented artists have really made the book look gorgeous. Stuff in the distance is beautifully muted, and the foreground figures are punchy and vibrant. Lovely.

Richard Starkings and Comicraft are the finest letterers/lettering studio in the business, in my humble opinion, and their work in this issue is – as usual – faultless.

Sadly, that’s where the positives end, at least for me. 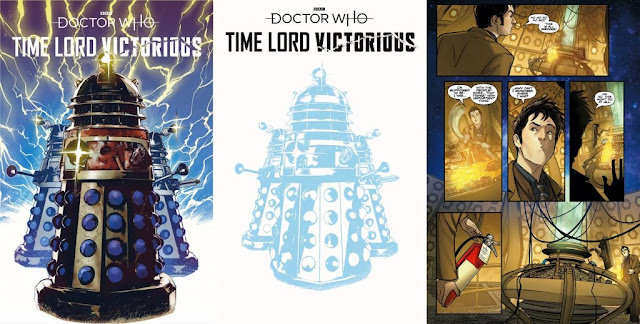 It’s clear that this is all just a small part of a mega crossover, as this tale has none of Jody Houser’s flair, charm, or wit, just her spot-on dialogue. There are a ton of extra pages, when compared to a standard issue, but not a lot happens. In fact, this story could’ve been half as long, and twice as entertaining. I feel like Jody has just been roped into taking part in this crossover, and is just filling out someone else’s story. A writer that talented deserves far better.

Oh, and the almighty enemy the Daleks fear, and need the Doctor’s help to defeat… well, I hope you’re not as disappointed when you see them as I was. What an anti-climax. 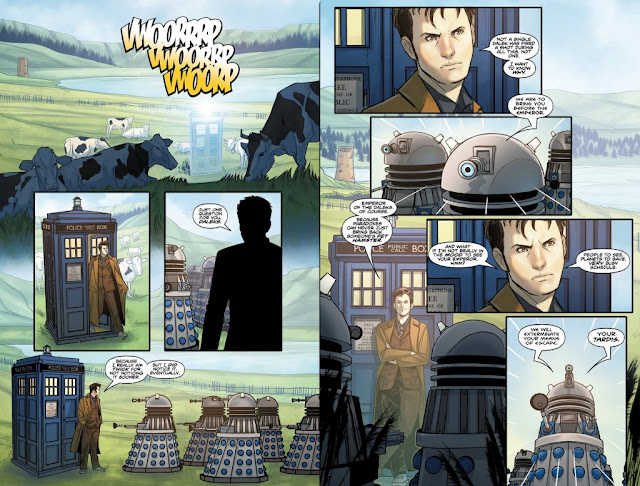 Sadly, the same can be said about the usually brilliant Roberta Ingranata. The art is still really cool, but there are far too many re-used images, and copied faces and poses. Look below, and you’ll see what I mean. The top two panels on the left hand page, as the Doctor opens the TARDIS door, have been only marginally edited. On the right hand page the Doctor’s face in panel one is exactly the same as the one in panel four. It’s the same on the second page above, in panels one and three.

While I feel that the task of drawing hundreds of Daleks can’t have been much fun, a little more effort could’ve been made with the faces. Sorry Roberta, I usually love your work – I say it in every review – but I feel that you’ve been hijacked into this “event”, and will accept this as a temporary blip. I will say though, that the art in this issue is still better than half the stuff produced by Marvel these days. Again, just my opinion. 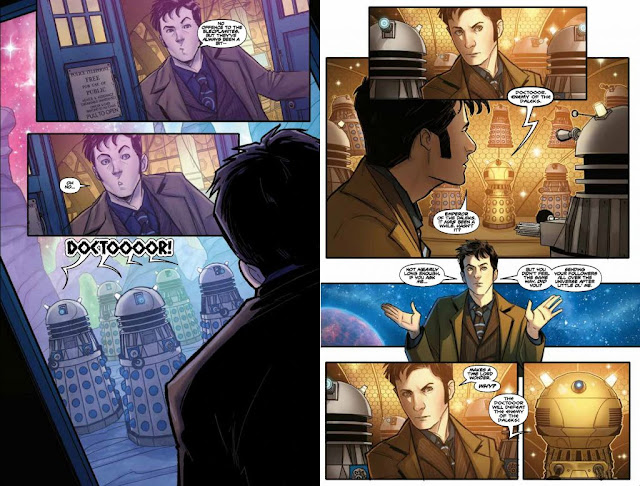 I hate saying this, but Doctor Who: Time Lord Victorious #1 was one of the most disappointing comics I’ve read this year. It was overlong, unimaginative, and felt rushed. I seriously hope that part two is better.