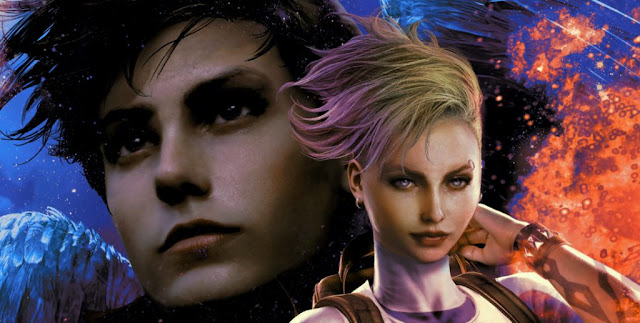 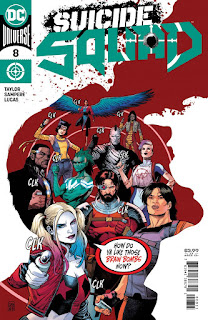 If you like a heavy dose of pathos and emotion served with your carnage, then Suicide Squad #8 is the perfect book for you. Eschewing the usual forward motion of the narrative for an issue almost exclusively dominated by flashbacks, Tom Taylor allows his readers to find out more about The Aerie and her past.

Whilst some readers may not enjoy such a deviation from the main thrust of the plot, I welcome it. Let’s not forget, the majority of this team’s formed of new characters that we’re still getting to know, so why not fill in the blanks for us, so we can understand more about where they came from, and what’s formed their personalities. When a certain mainstay of the team appears to be on borrowed time, we should embrace the new blood as much as we can…

So, the backstory of The Aerie dovetails into the plotting by Ted Kord, and his nefarious schemes. (Is he really a baddie now? I’m not convinced). With her homeland of Badhnisia being host to a huge oil reserve, the vultures are circling. Such avarice is what led to her wings being formed, and what a tale it is too. Equal parts touching, romantic and defiant, the love story between her and Wink feels authentic, and pure. With flashbacks that provide a welcome return to the series for Amanda Waller, there’s so much meat on the bone to enjoy. 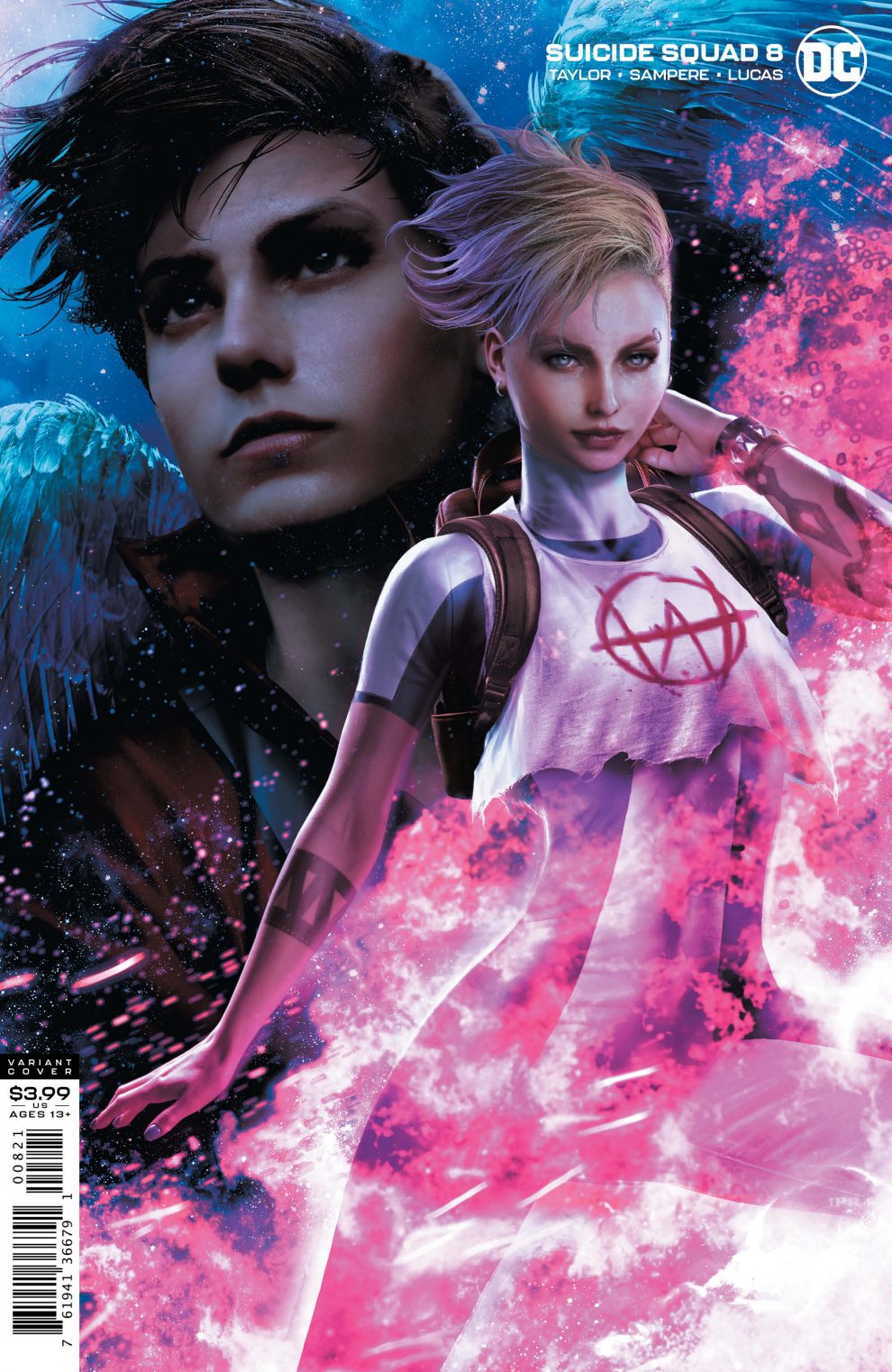 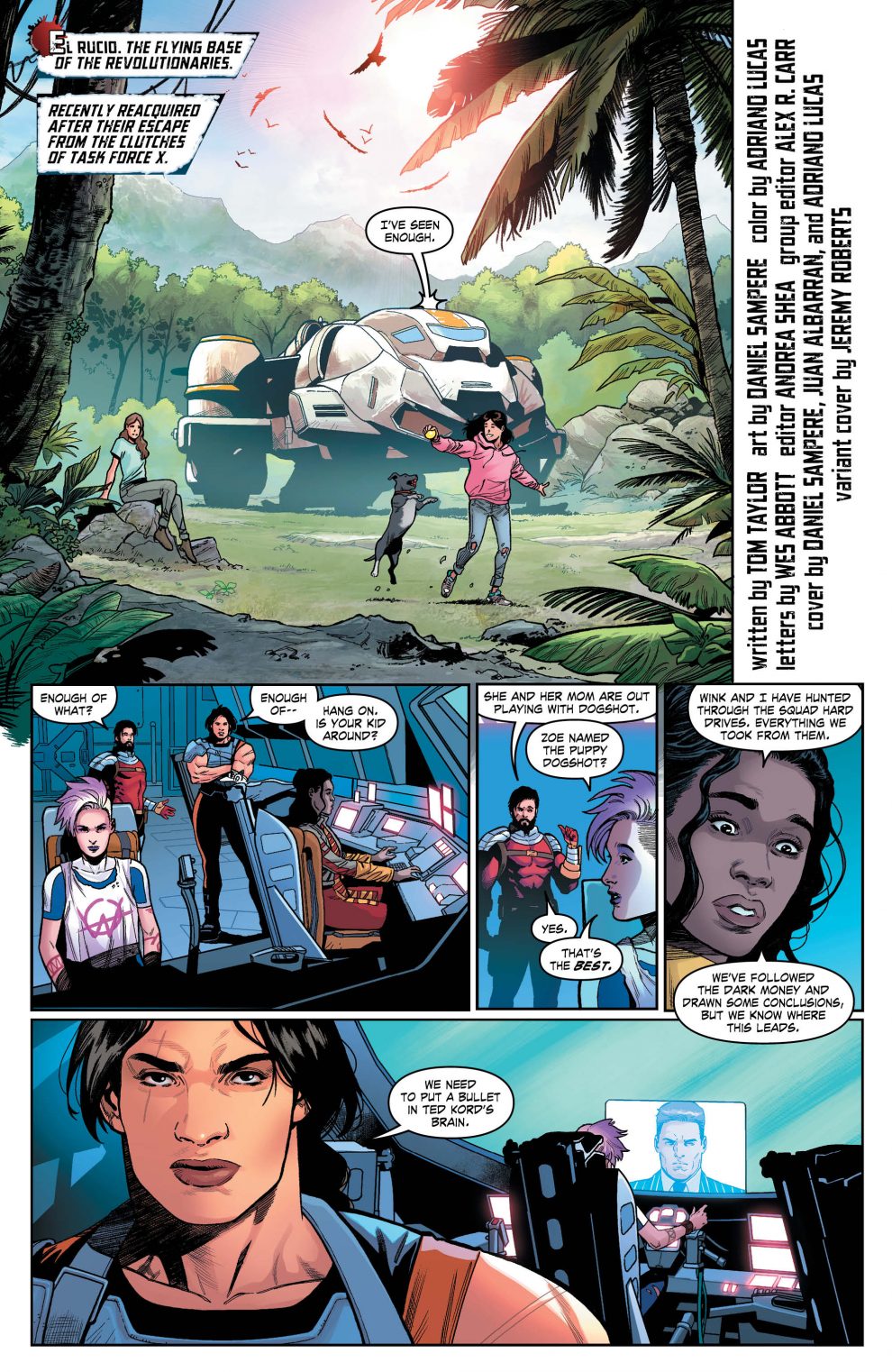 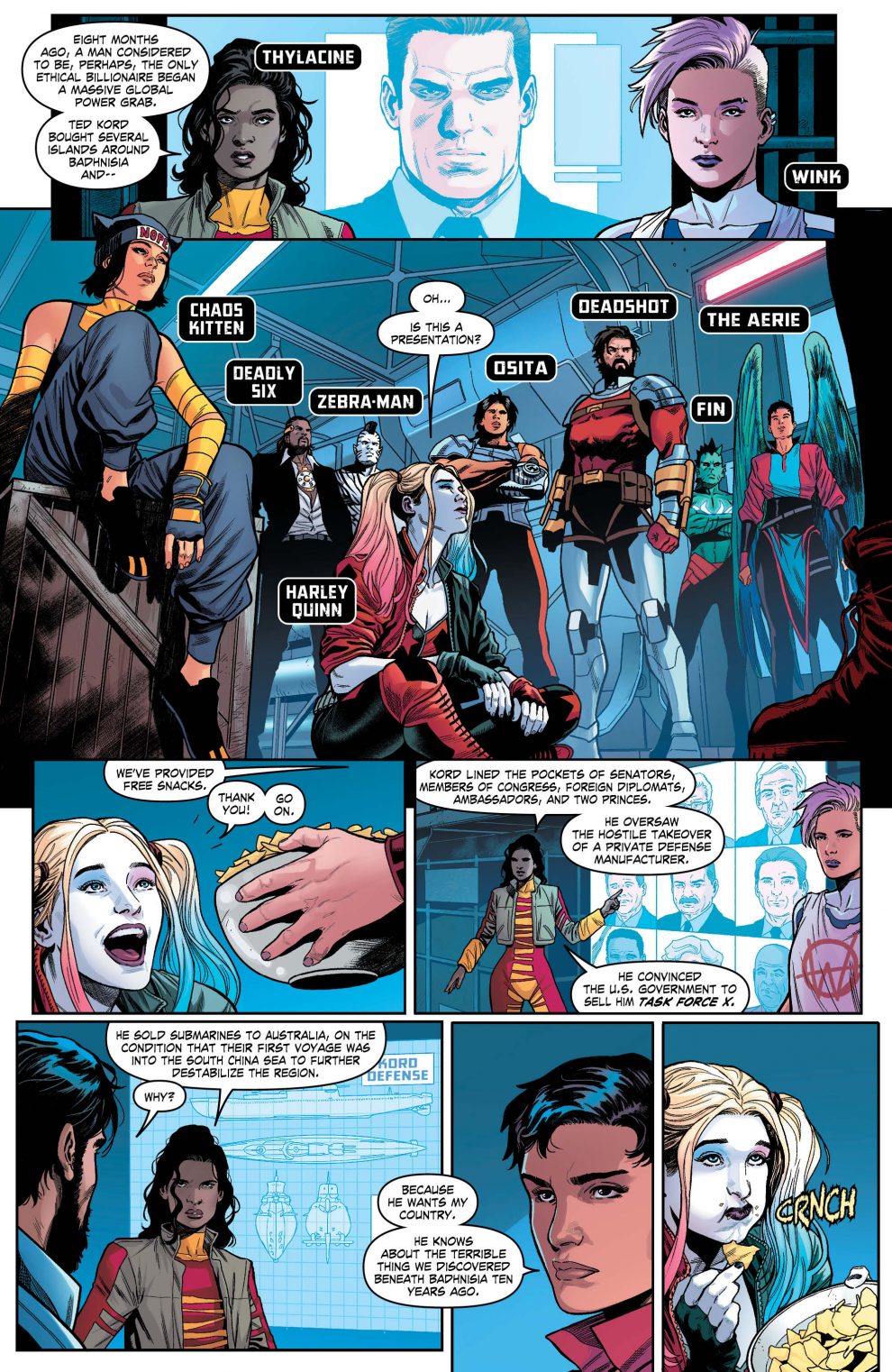 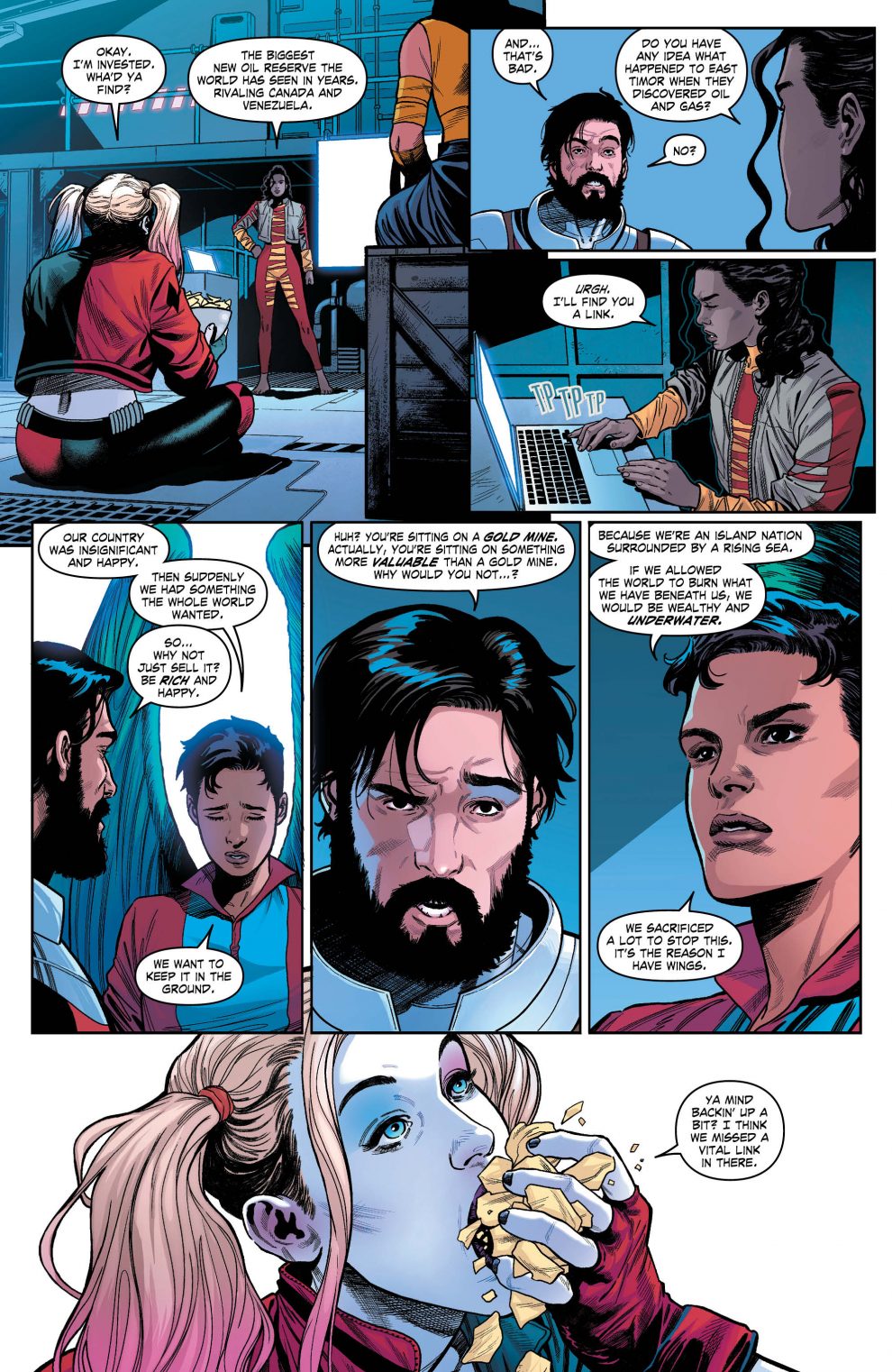 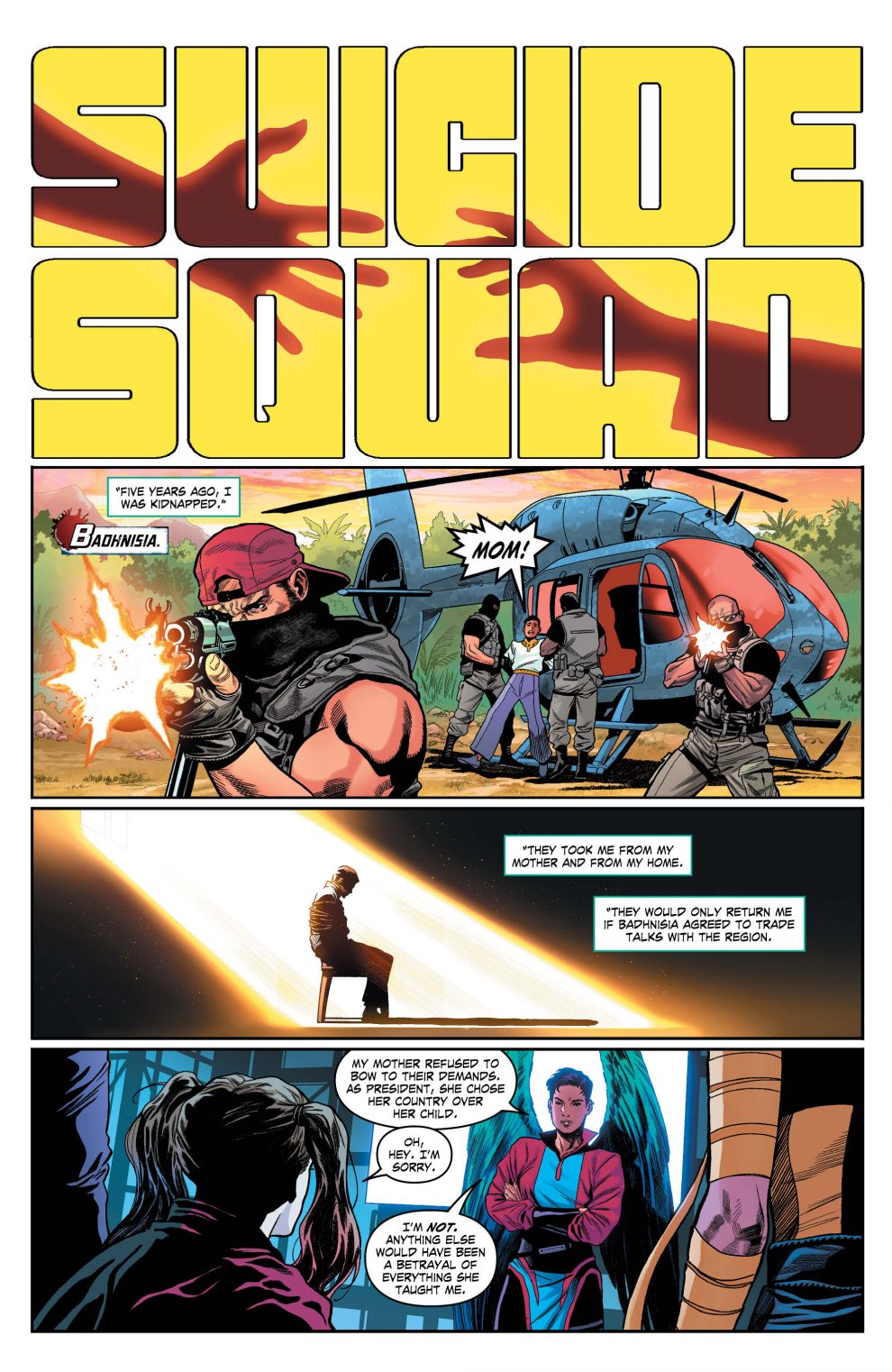 The art of Daniel Sampere is a true treat, and this issue showcases his versatility. You want wall-to-wall action? Check. Tender imagery that conveys a genuine sense of love and affection? Check. Panels of Harley Quinn looking as bonkers as always? Check. Sampere runs the gamut of his whole repertoire within these pages, proving that he’s the perfect foil for Taylor, and can put his scripts on the page in a perfect fashion. As always, Adriano Lucas is on top form with his color work, providing a vibrancy and brightness that simply demands your attention.

As mentioned earlier, it remains to be seen what Ted Kord’s motivation is here. The ending of the issue does certainly paint him in a villainous light, but as we know with comics – and specifically Taylor’s writing – things are not always what they seem. It would be a bold move to make the erstwhile Blue Beetle turn to the dark side, which is guaranteed to get the fans foaming at the mouth. Or, are we deliberately being misled ready for a rug pulling revelation to come? With the series due to come to an end with issue 11, the next three issues are going to be a rollercoaster ride.

Suicide Squad #8 is a book that offers a mix of content. One gets the feeling that this is the last table setter and the final three issues are going to deliver dose of perpetual, forward motion. With a longstanding character of the DC universe set to (allegedly) expire in issue #9, Taylor’s certainly not going to pull his punches.

In this issue, as with all of them to date, the pacing is spot on, and proves that no other title provides such a heady mix of violence, humour and tragedy as the stories of Task Force X.