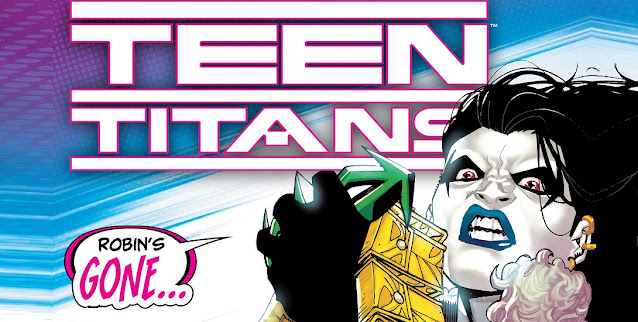 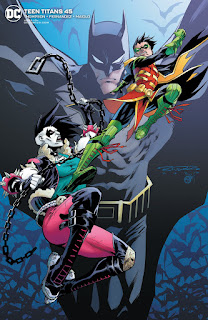 Hot on the heels of issue #44 and the Bat-Tastic Annual #2, Teen Titans #45 gives us a team that’s fractured, and leaderless… but not without direction.

Can Crush take this group of meta-teens and start them down the road to redemption, or will figures lurking in the shadows stop them, dead in their tracks?

Robin has quit, not just the team, but also his very identity as the Teen Wonder… but has he trained his comrades in arms too well? First Kid-Flash and Red Arrow, and later Crush and Roundhouse, soon decide that they should be the masters of their own destinies. 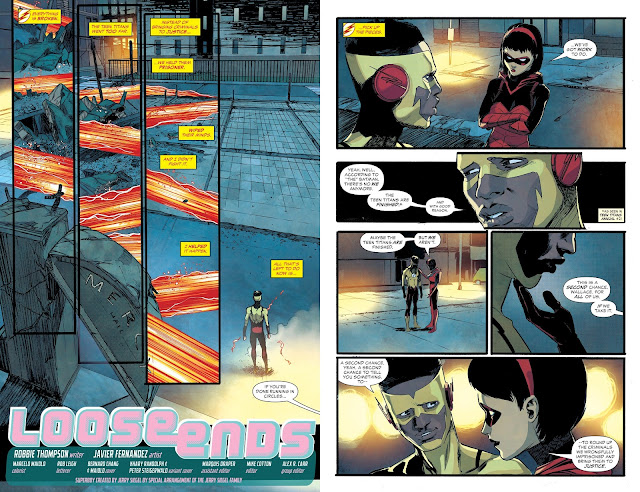 Once again Robbie Thompson has taken comics tropes and flushed them down the lavatory. With only two issues left it would’ve been fairly easy to wind this story down, and watch the Teen Titans walk off into the sunset. No… that’s not this writer’s style. What we get in this issue is a group of stubborn, yet incredibly capable young people who want to make stand, and do the right thing. I know I say this a lot about this book, but that just makes them all so awesome, and so damn real.

We also start to see a real depth of emotion and character growth, not just with the blossoming Wallace West/Emiko Queen romance, but also witnessing Roundhouse’s need to accept responsibility, not just for his own actions, but the entire team’s. The greatest growth though has to be the one we’re seeing in Crush. This brand new character has gone from a bombastic, wild, and thoughtless engine of destruction, to a potential new team-leader, and it’s been a joy to behold. She’s not only lost Robin, but possibly the chance of finding love, after Djinn left the group.

This is inspirational behavior, and I hope that any Teenagers reading this book, particularly those feeling vulnerable, or those who have lost loved ones, can find strength in this. 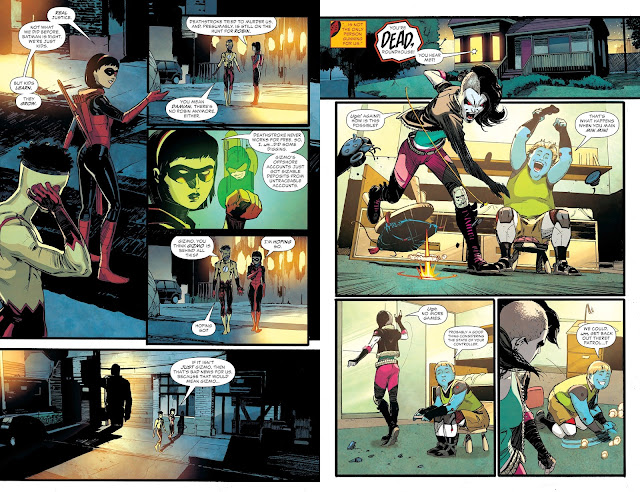 Javier Fernandez is a consummate storyteller… just look at this art! Not just the action, and the movement, but the backgrounds, and the shadows. Throughout this issue we see that the team is being watched, and this keeps us on edge throughout. When the lurker in the shadows is revealed, however, the discovery’s more surprising than I thought it would be, because it turns out to be the last person I expected. More fool me, because their involvement makes perfect sense.

Oh, yes. I’m saying that this issue features a terrific guest star… or two. Are they on the sides of the angels, or deadly enemies? You’ll have to read the book to find out. Ain’t I a stinker?

Marcelo Maiolo’s colors elevate the tension, and add even more atmosphere to Fernandez’s gorgeous, gritty line art. Rob Leigh’s lettering, from the sombre, pastel-pink story title, to his Flash-speak, and Crush’s explosive dialogue, is also sublime. I love this creative team, and am really going to miss them. 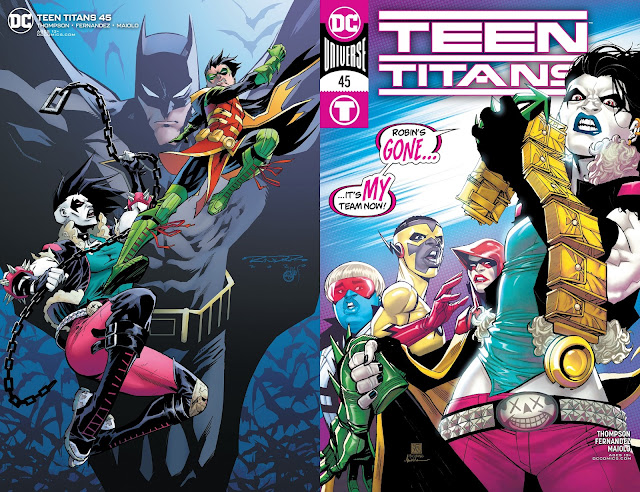 If you’d have told me back when Damian Wayne was introduced, waaay back in Batman #655-#658 (2007 – 13 YEARS AGO!) that I’d miss the arrogant little bugger, I would’ve called you a liar, and possibly a loon. Guess what? Over the years I’ve actually grown to love the annoying little creep, and now I miss him. Who knew?

There’s still a lot of story to tell, and sadly we only have two more issues for it to be told in. I’ll treasure the Adam Glass/Robbie Thompson, Bernard Chang/Javi Fernandez era of Teen Titans, as it’s been brilliant. I can’t wait to see what our cliffhanger character, and shadowy visitor will bring to the table next month.

Join me here again, won’t you?