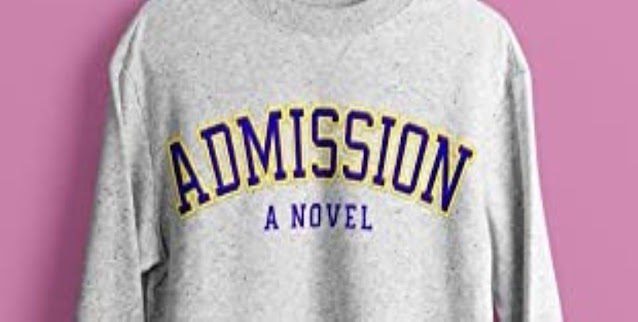 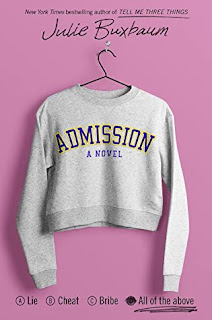 Julie Buxbaum, best selling YA novelist is back. Her latest work, Admission, will be released from Delacorte Press on December 1st. I was given an advanced reader copy by Net Galley in exchange for an honest review.

The premise of this book is pretty familiar. A few years back, in America, the news broke that many children of privilege were admitted into elite colleges and universities because their parents paid for test scores, transcripts and extracurricular activities to be falsified. This meant that, essentially, they were taking a spot from a more deserving student. Everyone remembers this story because it involved a few famous actresses. The outrage, rightfully so, was palpable.

What everyone forgot, during that time of righteous indignation, was that behind the selfish acts of rich, white elites, were children who most likely, had no idea what was going on. Buxbaum asks readers to take a step back from that feeling of rage, and to think about these crimes from the perspective of the children.
The book focuses on Chloe, the daughter of a woman clearly based on "Aunt Becky" herself. She's a B list actress who's made a name for herself doing lots of bad, but beloved TV shows, and Hallmark Christmas movies. The story begins with the FBI knocking on the door, then flips back and forth between the events after the knock. and the months leading up it 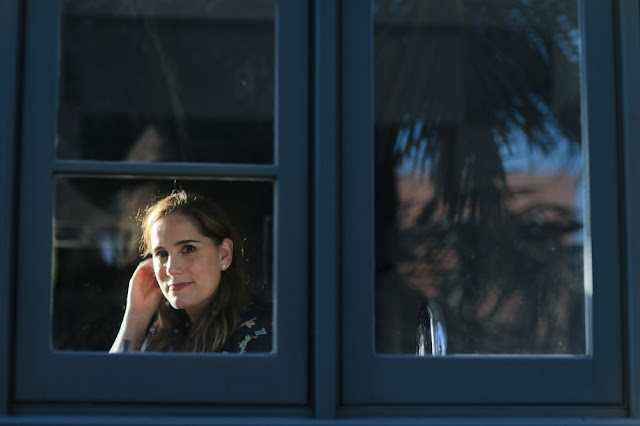 Buxbaum's strength as writer comes from giving us a flawed lead. It's clear that Chloe wasn't in on the deception, but it's also clear that she's willfully ignorant. Her heart's often in the right place, but she remains clueless to much of the situation that's going on around her. Shola, her hard working, genius of a best friend, offers readers some of the best counter points to Chloe's ridiculous life of privilege. Shola comes from a working class family. She shares a bedroom with her younger twin siblings, and needs every scholarship dollar she can get. The interactions between the girls is often sweet, but there are moments where Chloe's smallminded, myopic view of things take the reader's breath away.
Buxbaum throws readers just enough humor with Ilsa, the smarter younger sister who seems to be at once above the fray, and the only one who actually knows what's really happening. There are some meta moments as well when we learn that Chloe's mom loses a role to Felicity Huffman. Later, Chloe says she doesn't want to read The Picture of Doran Gray because, she "has no interest in spending 320 pages with a spoiled narcissist." Pretty hysterical.
Conclusion
Buxbaum proves once again that she is a first rate YA novelist. She gives readers insight into characters and makes them want to simultaneously give Chloe a hug, and smack her on the back of the head for being so awful. While readers may not feel more sympathy for Aunt Becky after reading this novel, they may take a beat and think about the kids who were involved, and how their lives were changed forever through no fault of their own.
Parents have a lot of influence in the lives of their children and maybe, just maybe, after reading this, a kid, or parent, will take a minute to realize what kind of examples are being set.