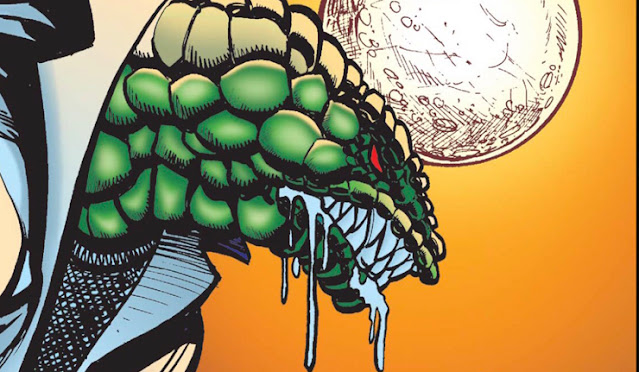 The last we saw Peter he died in the hospital bed. Fortunately, he's not really dead. We immediately see him spasming and then jumping all over the hospital room, breaking everything in his path.

Incidentally, as much as I love Sal Buscema's art, the panel where Peter is convulsing is weird. It looks more like that he's possessed by a demon and it's lifting his body up unnaturally. 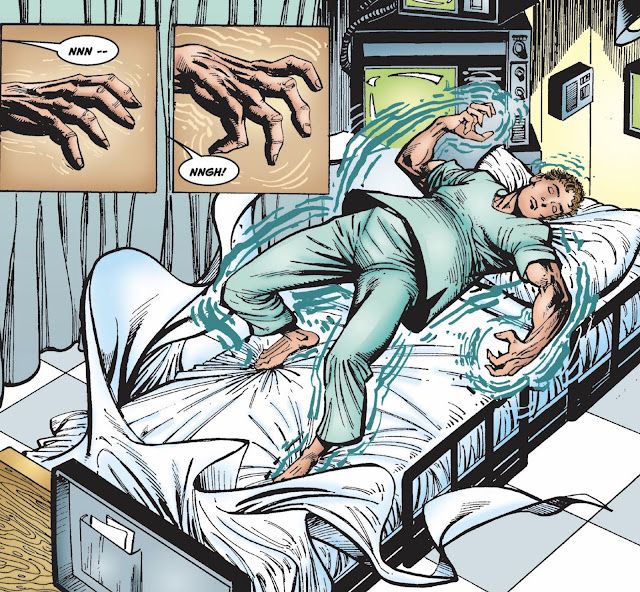 Anyways, actually gets his spider-powers back! His body was not used to jumping so easily, so he accidentally wrecks his room.

Speaking of wrecked rooms, Robbie Robertson and Glory Grant investigate J. Jonah Jameson's destroyed office at the Daily Bugle. Robbie picks up a folder that says "Rand/Meachim", hinting that they may have something to do with Jonah's disappearance. It's  such an intriguing tease, we're going to ignore how Robbie is blatantly interfering with a police investigation and taking evidence from an active crime scene. 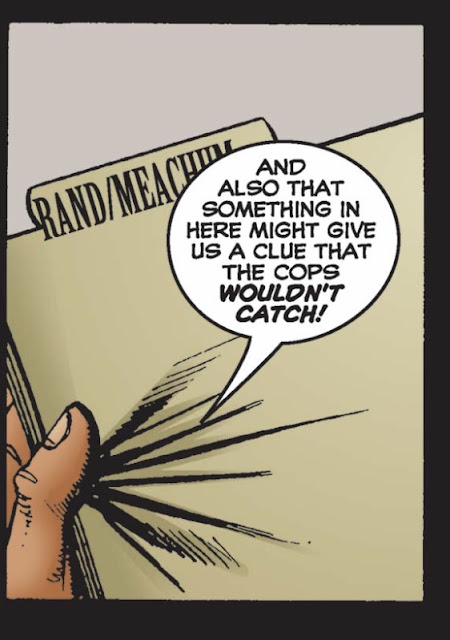 We then cut to Curt Connors having an inner monologue about how destitute the world has become due to global warming, pollution, and crime. The dialogue is... out-of-place. Honestly, it sounds super out-of-character for a normally gregarious Conners. Since when does he care this much about the environment? 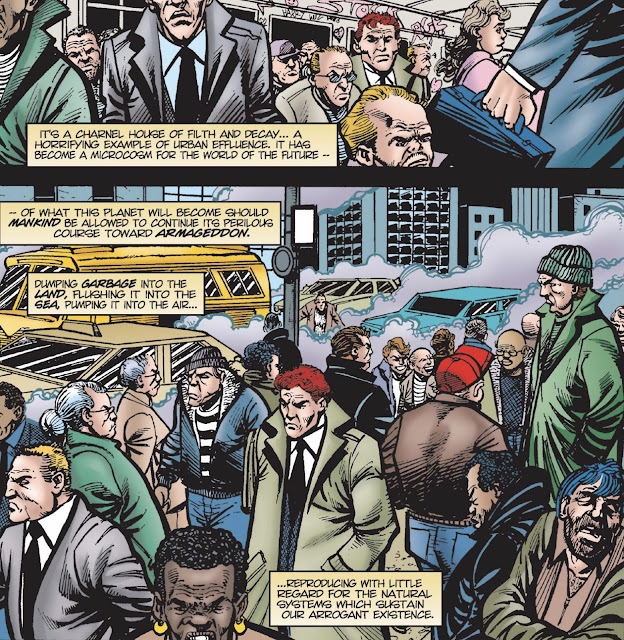 This talk about humanity destroying the environment is ultimately pointless. This does not really inform us about Connors' motives that is any way relevant to the story. Also, it's weird seeing Connors have red hair instead of brown. He looks like 90's Lex Luthor.

Side-bar, we see Ben as Spider-Man comment on Graydon Creed- a presidential candidate running on an anti-mutant platform. His inclusion here is to foreshadow the upcoming X-Men crossover event: "Onslaught".

Creed's rhetoric is... not unlike other American politicians nowadays. I used to think how unbelievable it is that people in the Marvel universe are so flagrantly xenophobic, but now it's not so crazy given real life US politics. 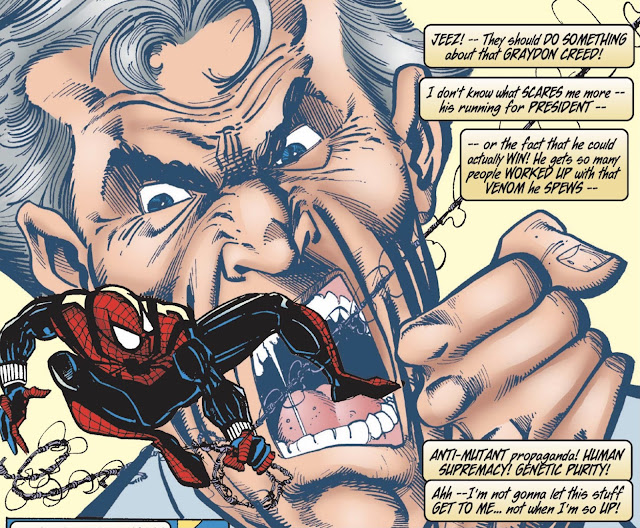 Incidentally, while "Onslaught" does not really affect Spider-Man's life that much, it did influence the Spider-Man creative teams in a different way. According to then-editor Glenn Greenberg,  Ben Reilly's tenure as Spidey was supposed to end in "Blood Brothers". However, then-Editor in Chief Bob Harras told the Spider-teams to push back Ben's ending to another six months, because "Onslaught" was going on at the same time.

Which is why "Blood Brothers" has very sudden change in direction late in the story line. Now the Spider-titles are all doing their own separate story lines to spin their wheels a bit until Peter can return as Spider-Man.

So back to the main plot, Spider-Man sees an iguana-like Lizard creature battling the police. Somehow, the Lizard 's fight with Spider-Man makes it's way to the hospital where Peter is staying at with... Curt Connors!?! 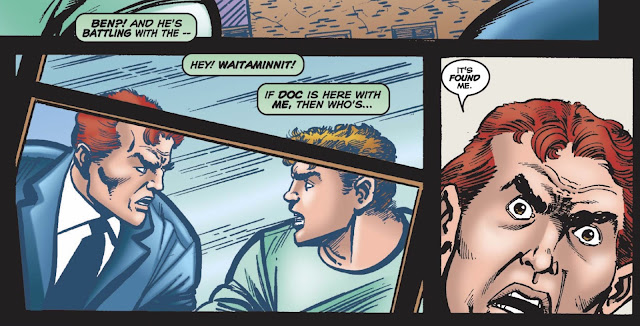 What the?! If Conners is supposed to normally be the Lizard, then what's he doing next to Peter?!

By the way, this is not even the first appearance of the iguana Lizard. He first appeared in a back-up story in the "Planet of the Symbiotes" specials a while back. Unfortunately, I don't have access to those stories, so I can't review them.

Anyways, Peter disguises himself in hospital scrubs to battle this new Lizard with Spidey. Hilariously, Ben almost kills Peter by pushing him off the roof and has to save him. Which allows the new Lizard to get away. 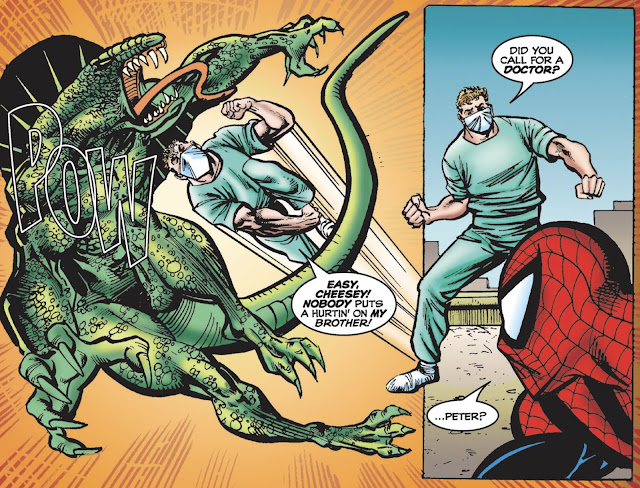 Later, Curt Connors returns to his home in Florida, presumably to escape from the new Lizard. This new mindless Lizard seems to be stalking him.

Conners flashes back to the creation of the new Lizard. His lab assistant Aldo injected an improved Lizard formula into a mutated iguana's tail and it turned into a humanoid Lizard creature. 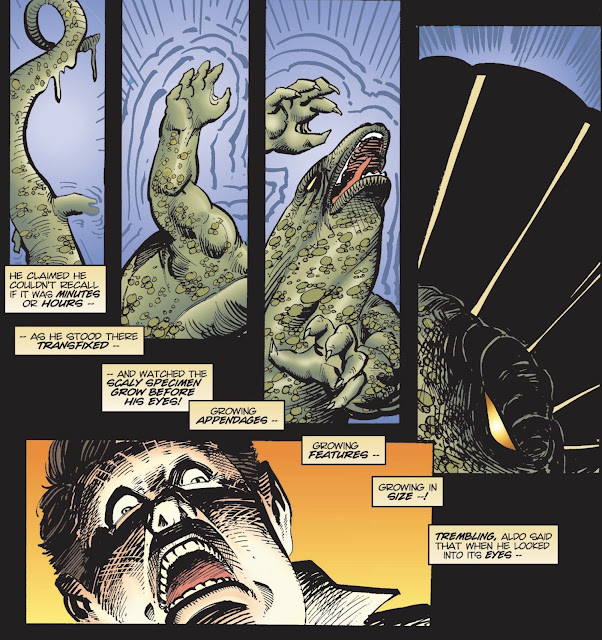 According to Connors, they were creating a formula to get rid of the Lizard traits in his DNA permanently. So, how does injecting Lizard formula into a tail achieve that? Who knows.

The most hilarious part in the arc is where Ben sees a TV news report of the new Lizard in Florida. So he runs out of his New York apartment, hitches a flight, tracks the new Lizard down just in time for it to attack Curt Connors and his son Billy.

I'm sure it took a few days to do all that, but the compression of the story time line makes it feel like it took him an hour.

So Spider-Man briefly loses the new Lizard in the swamp only to find Curt Connors transformed back into the original Lizard standing over the other Lizard's dead body. Hardcore return there, Connors. 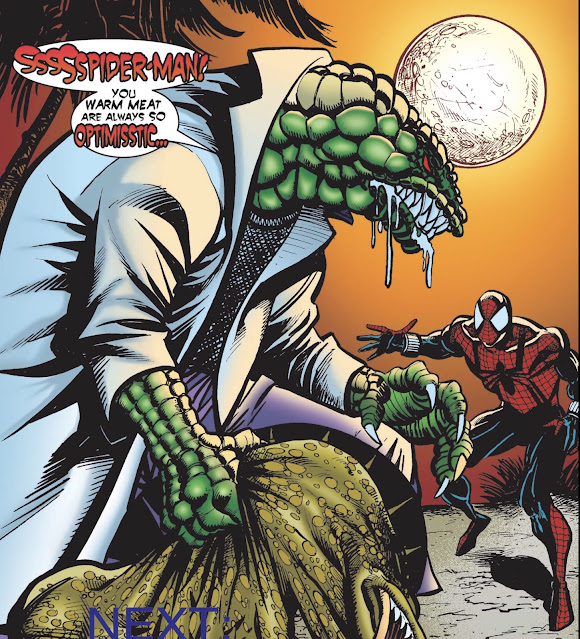 By the way, this issue is also the last issue that long-time Spectacular artist Buscema draws. The guy has been on the title for over 120 issues. That's nothing to sneeze at. Unfortunately, Marvel replaced him with Luke Ross mid-way through this story line. Jeez, Marvel, at least give Buscema the courtesy to finish the arc!

Ross' pencils already look a billion times better than his looser, anime inspired pencils in Sensational #7. Even though that was only a month later, Ross' art look tighter and he's clearly more confident in his style. Also, his version of the Lizard is super-cool looking. 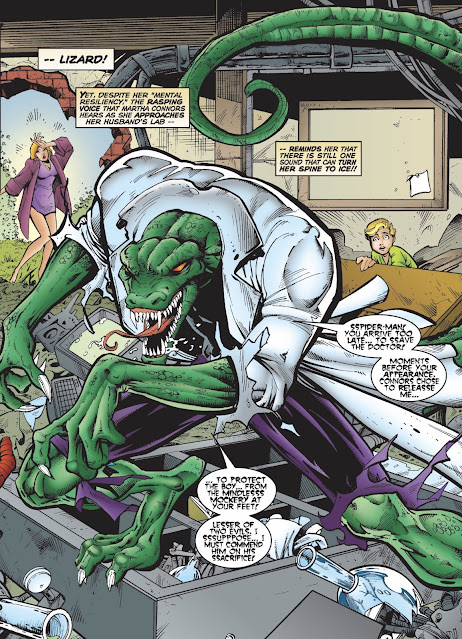 Eventually, the Lizard has the upper hand on Spider-Man by hailing all the reptiles in the swamp to attack him. It's pretty creepy to have all these snakes biting and swarming Spider-Man. That's my personal nightmare scenario. 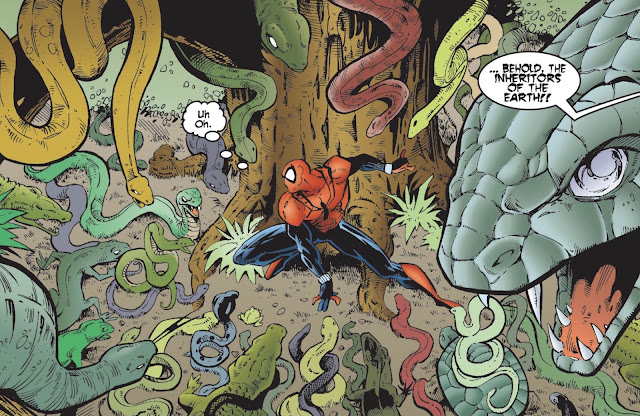 However, a tree trunk is about to fall on Billy Connors, but the Lizard saves him. This causes the Lizard to be stuck under a heavy log while in a marshy stream that threatens to drown him.

Spider-Man is too weak from all the snake bites to help, but he tells the Lizard that all he has to do is transform into Connors and slip out of the log. Surprisingly, the Lizard says "No" and rather die than succumb to Connors. 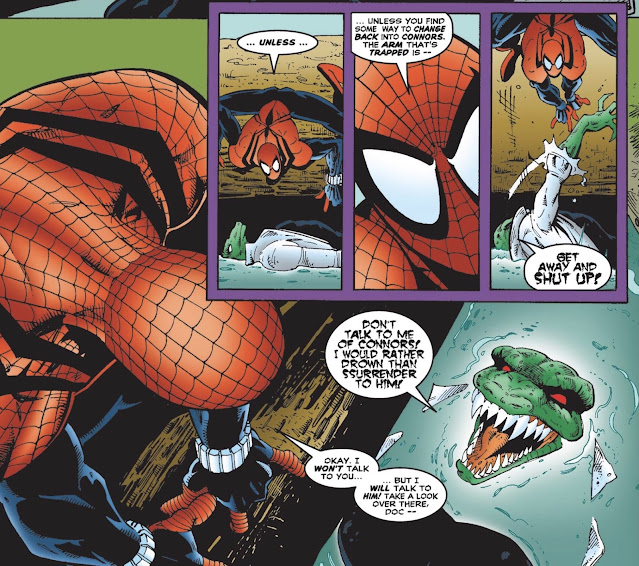 Spidey even tries to talk about how Billy will be in danger if he doesn't transform back. The Lizard coldly retorts "So be it" and allows the water to overtake him. That's a pretty shocking scene to show how cold-hearted the Lizard is.  He prefers suicide than to help a human.

It's pretty great for that one page, before the story changes its mind and lets Connors transform back into a human. Man, that really undercuts the Lizard's decision to let himself die.

It's too bad that the ending decided to turn into a last-minute happy ending. It takes away any drama that was built up earlier. Also, how did Connors change back anyways? Force of will? I've always seen him need an antidote to transform back.

Hilariously, Connors and Billy reconcile as Spider-Man is passed out from all the snake venom. It's a really funny looking image of a useless Spider-Man slumped over a log.

This story is not that great. It kinda meanders around and does not seem to have a strong direction. There is no point to Connors' rants about the environment and society, because it does not affect his motivations at all. What's worse, the most memorable scene where the Lizard rather drown than give into his human side is quickly tossed out in favor for a happy ending.

Also, I am not entirely sure if Spider-Man actually did anything to contribute to the story's resolution. He seemed kinda useless for the most part. 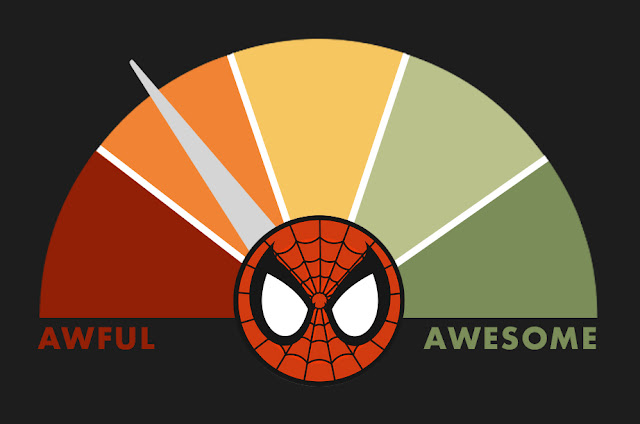