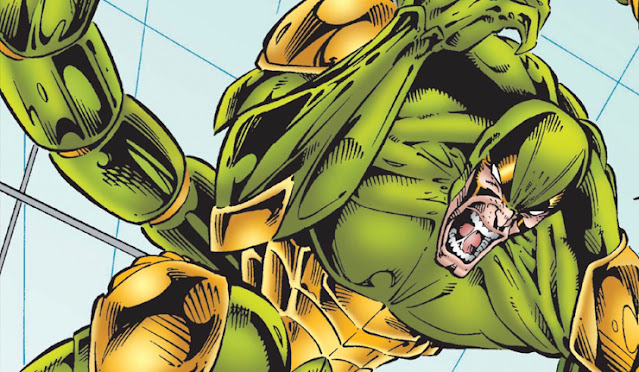 "The Sting of Conscience"  Spider-Man Unlimited #13

What happened with J. Jonah Jameson? He disappeared and his office was ransacked. Who kidnapped him and why? The answer... is not mentioned here.

We immediately find out who captured Jameson, his old nemesis the Scorpion! The reveal was literally on the first page. That's really odd how the writer didn't even bother building it up for dramatic purposes. Nope. Let's get straight to business. 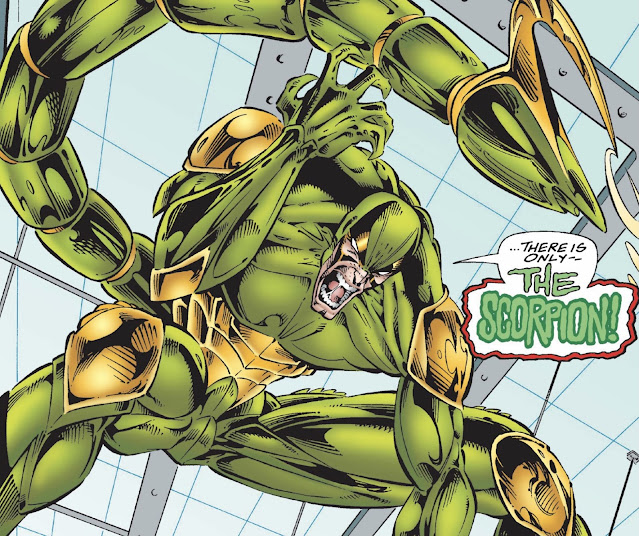 The Scorpion captured Jameson, because someone hired him to. It's a bit of a mystery throughout the book on who and why someone wants Jameson. And when I say "mystery", I mean the writer James Felder never explains it at all. That plot gets totally forgotten in the midst of these other plots that don't relate to Spider-Man.

But we'll get there in a moment. Right now, at the Daily Bugle, Robbie Robertson decides to forgo the police service handling Jonah's disappearance  and instead hires.... Luke Cage, Hero for Hire! 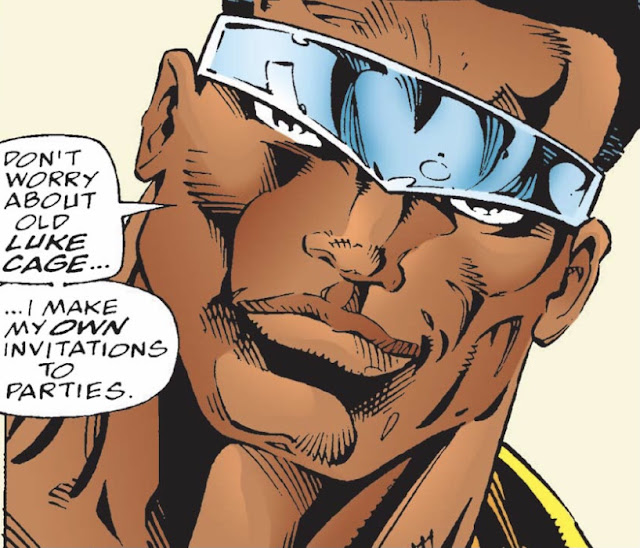 Why does Robbie not just let the police investigate? Well Luke Cage has to be involved in the story somehow! Don't worry about Robbie's logic! Also, why does Robbie hold a press conference announcing they hired Luke Cage? That's just gonna warn the kidnappers to hide Jonah better!

Or also the press conference is really stupid for another reason: Ben Urich immediately discovers the Scorpion kidnapped Jonah. He announces it in the most exposition-heavy dialogue ever. 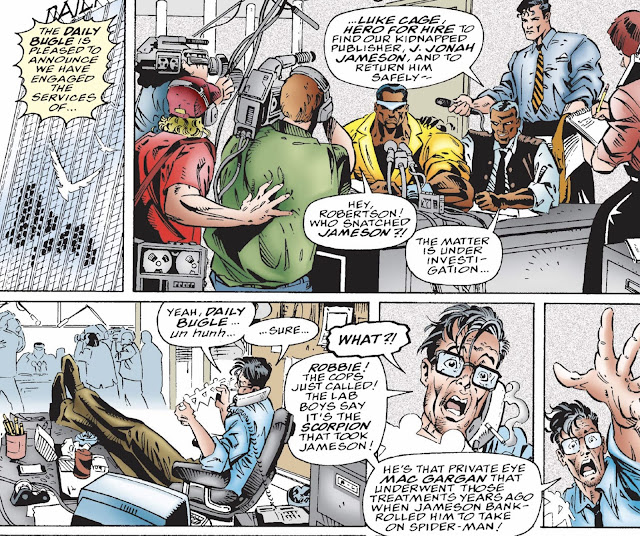 Seriously, nobody in real life would talk like that, much less announce it in the middle of a press conference. Ben sounds like he's reading the Scorpion's Wikipedia page.

So this seems like a good time to discuss Joe Bennett's art here. It's... not great. It's super Image-inspired 90's excess. A far cry from his current realistic style in the superb Immortal Hulk.

But this art-not even mentioning the ridiculous anatomy of both male and female characters- has a lot of characters super off-model. Like Colleen Wing, is a half-Asian woman, but here she is all Caucasian.

Or Luke's metal tiara is supposed to be on his forehead. But Bennett continues to draw his tiara as if it's too big and it keeps slipping right above his eyes. That's a total safety hazard in a fight.

Finally, the more egregious example is Bennett's version of Marla Jameson. Marla is a respectable scientist with glasses. Bennett's Marla is... 20 years younger and has a model's body type. Seriously. This is such an off-model that it's clear that Bennett had no idea what Marla was supposed to look like. 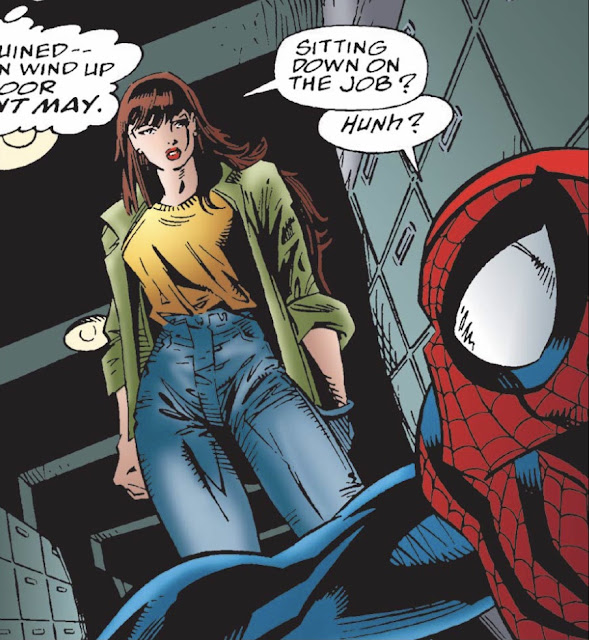 So Scorpion attacks Marla and Spider-Man at the Daily Bugle for no apparent reason. Spider-Man gets stung by Scorpion's stinger and they escape. The Scorpion doesn't pursue them or anything, so I guess he just wanted to fight for fun?

Incidentally, the Scorpion is extremely proud of his deadly new stinger. He repeatedly talks about how one sting will slow you down, two will kill you in 24 hours, and three will kill you instantly. The important take-away is that Spidey got stung twice and will die in 24 hours without a cure.

Meanwhile, Cage and his partner Misty Knight try to recruit Danny Rand (aka Iron Fist) to fight the Scorpion. But Rand is too busy doing random stuff that I have no idea what's going on. I assume that it's explained in the Iron Fist comic, but I am not covering that. 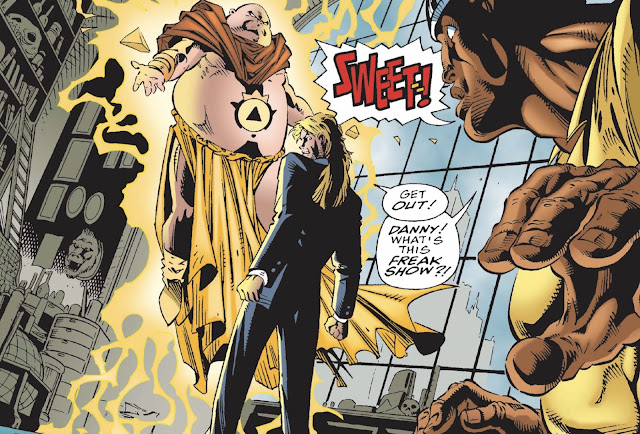 For some reason, Cage assumes that there is something illegal going on at Rand Corporations. So Rand directs Cage to his senior supervisor Jason Quartermaster. 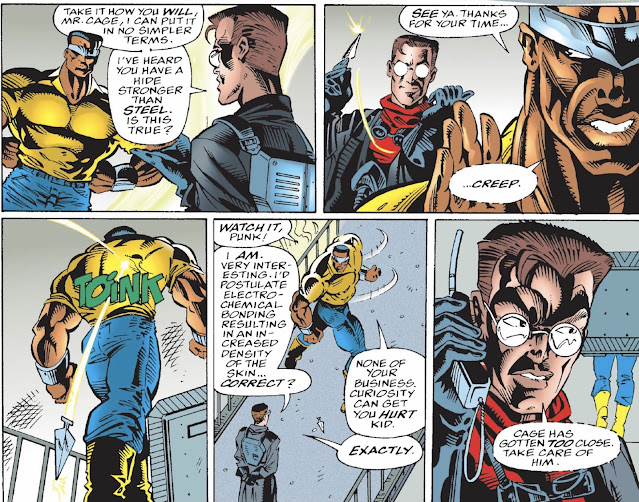 If you haven't figured it out based on his name alone, Quartermaster is the villain behind all of this. Also, he looks like evil nerd Peter Parker from Amazing Fantasy #15.

Also also, Quartermaster claims he's innocent to Cage and then promptly throws knives in Cage's back for ha-ha's. The dude is literally trying to stab you in the back, Cage!

So, the Scorpion breaks into Luke's place and tries to bribe him to drop Jameson's case. Luke rejects the offer and Scorpion destroys both Cage and Spider-Man.

Despite having both heroes under his boot,

Scorpion decides to run away again. Why doesn't he just kill both of them?

Of course Scorpion is holding Jameson in the same facility where he first got his powers! Why not? And of course Spider-Man figured it out based on some random cliche saying.

This kind of logic is very child-like. It's almost a wonder if the writer just gave up and needed some way for Spidey find the Scorpion. Oh yeah, and Luke Cage, Iron Fist and Misty Knight also found the Scorpion's hideout too, because.... reasons?

It turns out Cage found the antidote to the Scorpion's neuro-toxin from Quartermaster. Also, Cage killed Quartermaster in probably the most horrific way possible by dropping him into a vat of acid. "A fitting end to his kind!" 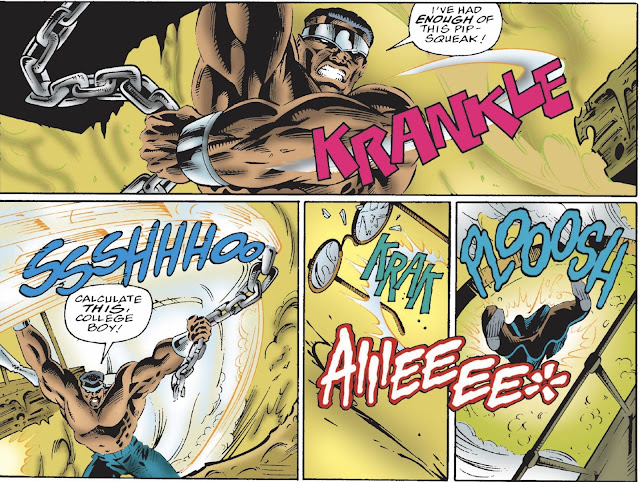 Anyways, once Spidey took the antidote, he feels 100% better and proceeds to beat the tar out of Scorpion. However, mid-fight Scorpion collapses and apparently dies. The new experimentation to make him stronger ironically killed Scorpion. 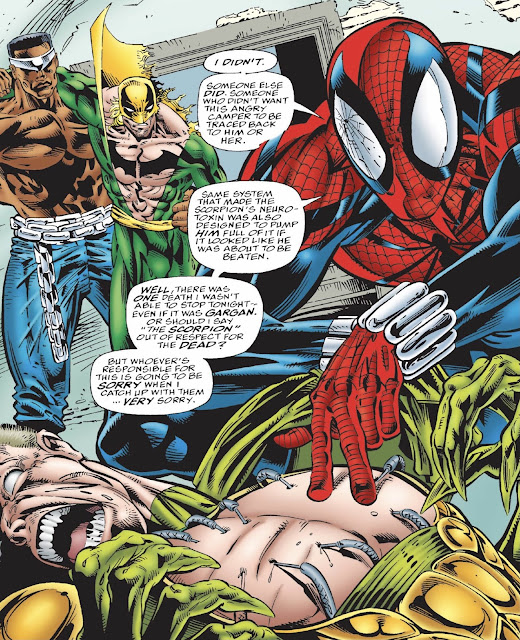 Or does it?? In the police van, Scorpion is revived and a shadowy figure helps Scorpion escape! Another shadowy mystery person in the Clone Saga.

So who employed Scorpion and Quartermaster to kidnap Jameson? It's still a mystery! We don't even know why they kidnapped Jameson. This whole comic is completely pointless, because it answers almost nothing. How is this story 48 pages and it offers almost no answers?

At this point, I feel just as annoyed as Ben does. 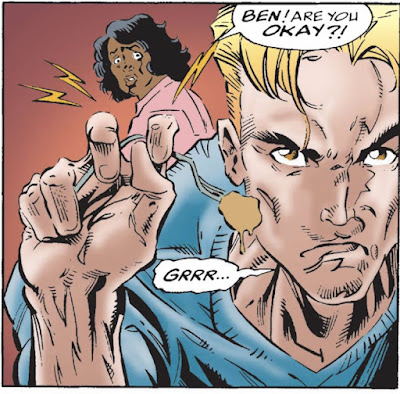 Repetition is My Job, My Job is Repetition: And

This may be the worst Clone Saga story I've read since Maximum Clonage. After a string of decent-to-good comics in the main Spider-Man titles, this issue is straight-up awful. Stuff is happening just because, the characters are over-the-top, the art is really ugly looking, and nothing gets answered.

This issue is a good example of a bad Clone Saga comic: ugly, confusing, and frustrating in it's endless plot teases. And another mystery man. Please... no more mystery men! 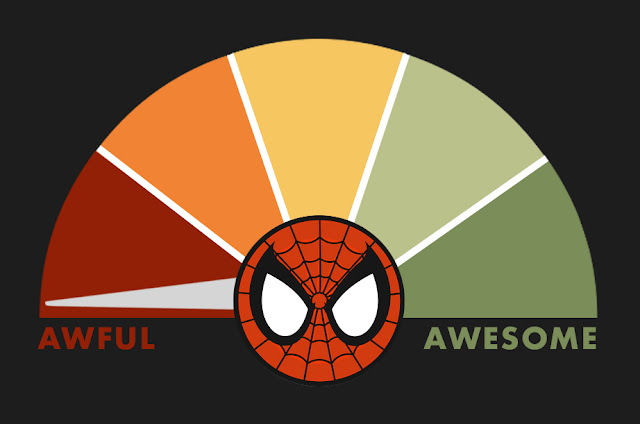