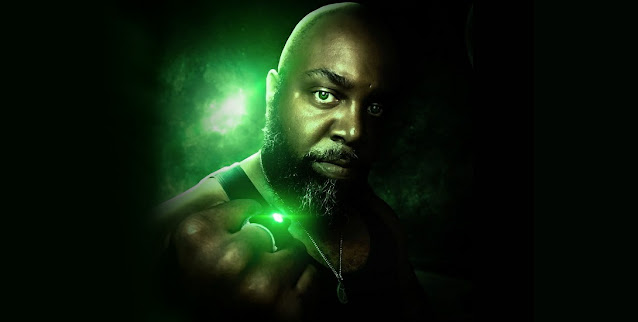 One of the greatest parts about writing for Fantastic Universes, DC Comics News, and Dark Knight News is getting to shout about great content made by fans.

Anyone who follows this site knows that I’m part of the amazing DC Comics News Podcast team, but I have another show, Superheroes For Dummies, that’s appears the brilliant Comics In Motion Podcast Network and on YouTube. Another CiM host is Mike Burton, who has a Star Wars comics show there, but who also runs a podcast called Genuine Chit-Chat: Honest Conversations With Interesting People. I was fortunate enough to be a guest on episodes #108 and #109, which is where I met the amazing BZ “The Voice” Cullins.

Let me tell you about this guy.

BZ inspired me. Not only is he a respected voice actor and voice acting coach already, but this Las Vegas resident is a bona-fide comics fan, and one of the nicest people you could ever hope to meet.

BZ is a Green Lantern fan, particularly when it comes to John Stewart. Some fans read comics, buy books, or watch TV shows. BZ Cullins is an actor, so he’s moved on from just  reading about John Stewart, or watching his adventures in animation… BZ Cullins has become John Stewart.

After creating a short – filmed entirely on his smart phone – BZ has gone on to create a fan film online, which is a passion project, and a completely new take on a Superhero fan film. Everybody knows the famous Green Lantern Oath:

In Brightest Day,In Blackest Night,No evil shall escape my sight.Let those who worship evil’s might,Beware My Power,Green Lantern’s Light.

Now we get to say what happens on a superhero’s Brightest Day Off!

Green Lantern, Shayera Hall… so cool! Plus the added bonus of a sequel in the works, featuring every Sector 2814 GL! I cannot wait for In Blackest Night Out!

What do you think of In Brightest Day Off? Please let us know.

The DC Comics News Podcast, Superheroes For Dummies, all the Comics In Motion shows, and Genuine Chit-Chat, can be found on Apple Podcasts, Spotify, Stitcher, Google Play, or Wherever you find podcasts.