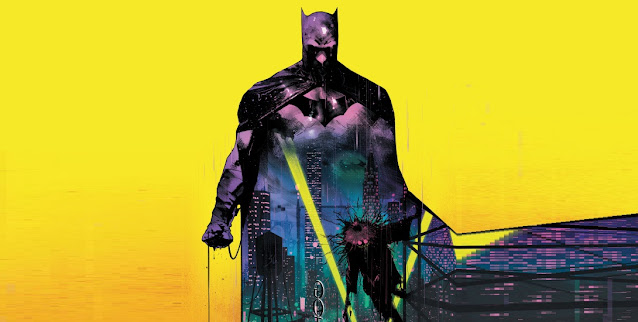 “The Cowardly Lot” – Part One

The release of Batman #106 sees the main timeline and continuity of the DC universe put back at the forefront of the release schedule, following the excellent Future State era that’s been the main focus for the last couple of months. Whilst I thoroughly enjoyed the diversion into a different time and era, there’s something about a return to the status quo that feels very welcome. It just feels right. Make no mistake, our time in that bleak future is thankfully far from over, but I for one am happy to see the resumption of Tynion’s vision here.

Bromance is still in full force, with our titular hero and Ghost-Maker’s alliance very much in full swing. Although he’s been something of a divisive addition to the Bat-Family, I’ve fully bought into the friendship on show between the two men. Anytime we get to delve deeper into Bruce Wayne’s years spent training to become the Dark Knight is very welcome, as it helps us to understand more about his journey to the cowl, how his skill set was formed, and how those he met along the way have influenced his way of thinking, and framed his ideology. Adding a protagonist that, whilst operating under a much harsher code of conduct, shares a deep rooted friendship with Bruce, is great to see. For a character that often stands as a man apart, to see genuine friendship is a refreshing change. Will it last?

Speaking of change, this arc sees an old arch enemy of Batman back in the game, in the form of a certain Dr. Johnathan Crane. Scarecrow has always been a favourite of mine, as he eschews any physical prowess for a more cerebral approach, clouding men’s minds in a manner that Lamont Cranston would be proud to call his own. Working in the shadows, his plot has yet to be fully revealed, but with a higher intelligence, such as Crane’s, there’re always grand schemes and plans. A chilling final panel reveals that Gotham’s Mayor is about to get his attitude adjusted. Fresh out of a meeting regarding The Magistrate, all roads certainly seem to lead to the aforementioned Future State. 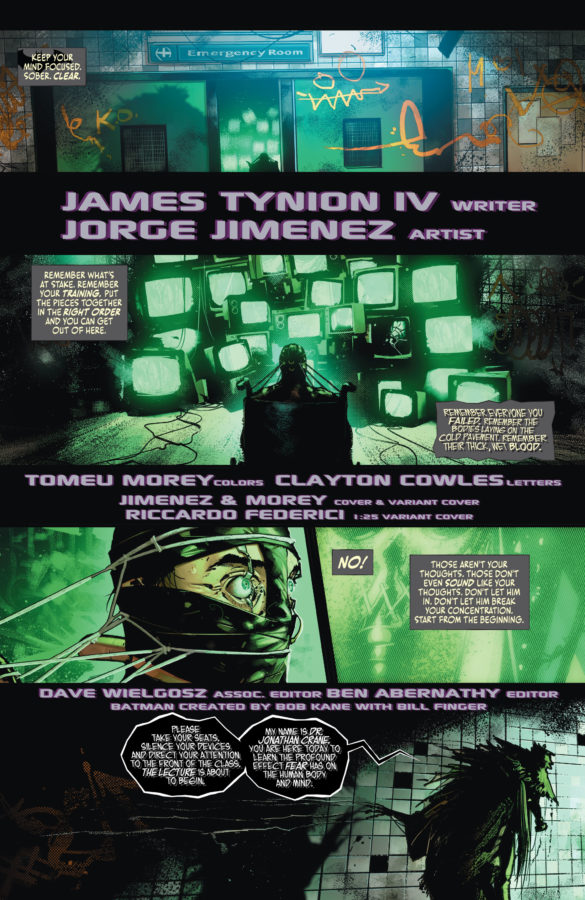 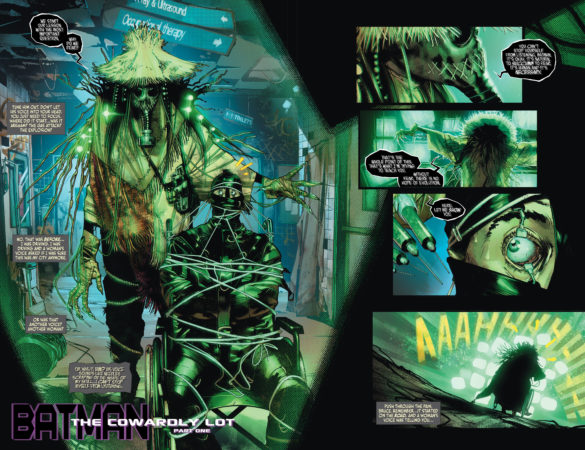 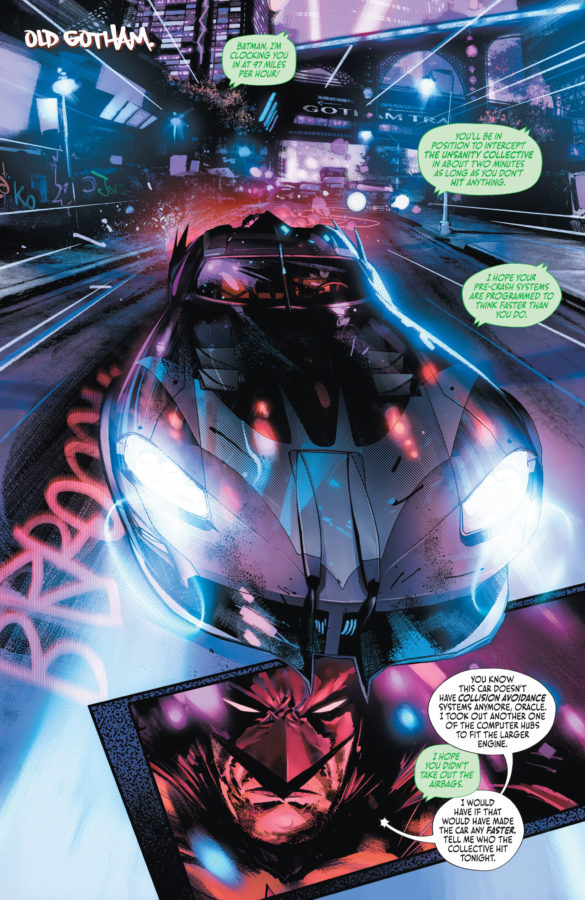 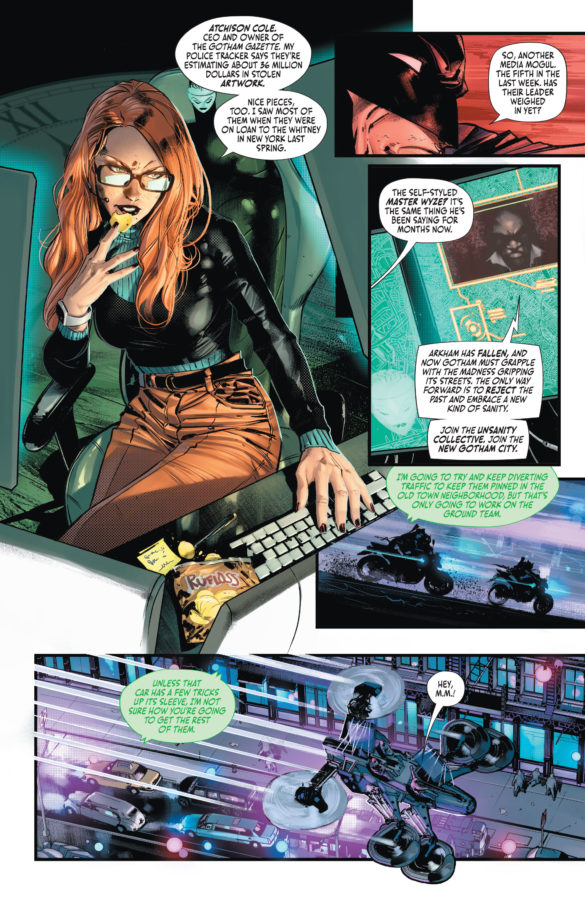 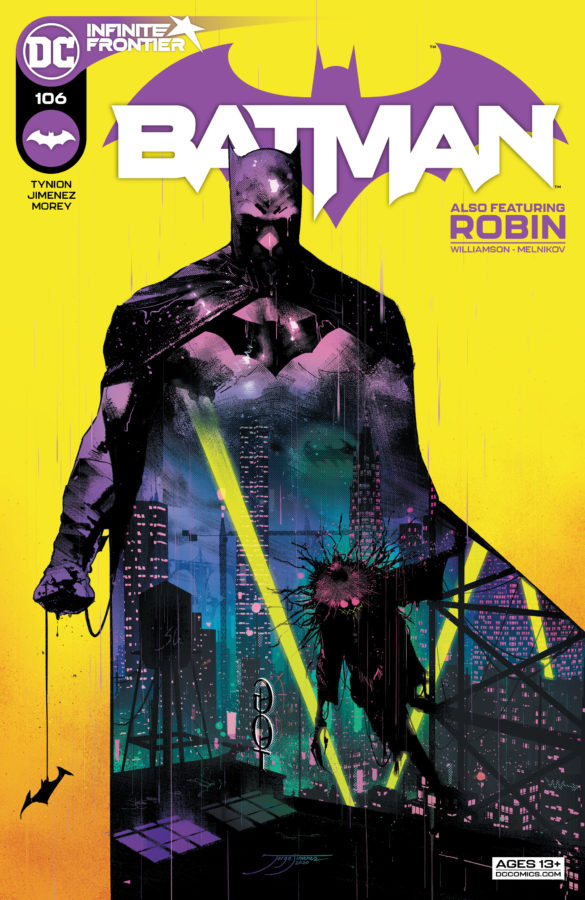 The opening of this issue also shows via a flash forward that the good doctor has Batman right where he wants him. To describe it would be to spoil it, but for a man that’s escaped more tight spots than Harry Houdini, even the Bat appears to be in deeper water than usual…

It has to be said that Batman #106 looks wonderful. The art of Jorge Jimenez is certainly a visual feast, and every page is absorbing, detailed stuff. His figure-work is second to none, with each character given their own distinct look, setting them apart from the other characters on the page. Working in perfect synchronicity with Tomeu Morey’s colours, moments of dark, shadowy intrigue contrast with explosions of vibrancy and kinetic combat. Even if Tynion’s wonderful words were removed, we would find that every picture tells a story.

There’s a bonus mini-story on offer here too, featuring a family reunion between Damian Wayne and his dear mother, Talia al Ghul. As is often the case with their bloodline, it isn’t long before violence ensues. The blissful family reunion is crashed by outside forces, and the cliffhanger ending means that I cannot wait to find out where Damian’s path is leading him. Seemingly looking to re-embrace his heritage, will he even get the chance?

Batman #106 is a great read.  After a break in the release schedule, Tynion hits the ground running here. Setting up an intriguing prospect for the next few weeks with the introduction of Scarecrow to the mix, one feels as though Batman has extremely dark times ahead of him. With friendships and family relationships at a tipping point, mixed in with a bleak future, times are about to get very trying… very trying indeed.