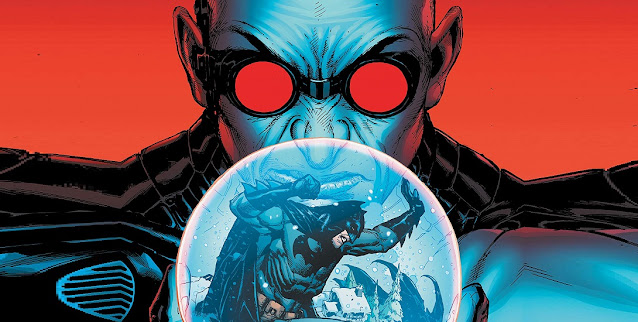 Detective Comics: Cold Vengeance is a brilliant trade paperback that collects the complete Mr Freeze saga from issues #1012-#1016, the standalone story “Orphans” from #1017, and the “Dead of Winter” two parter: “Have Yourself A Pagan Little Christmas”, and “A Bloody New Year”, from issues #1018-#1019, of the ongoing Detective Comics series.

Eight great issues under one cover? That’s enough to send chills down anybody’s spine… including Mr Freeze himself! 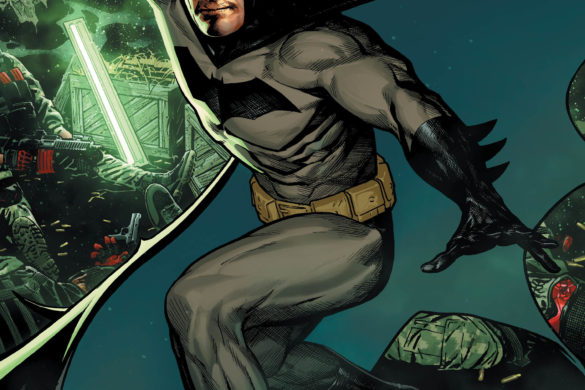 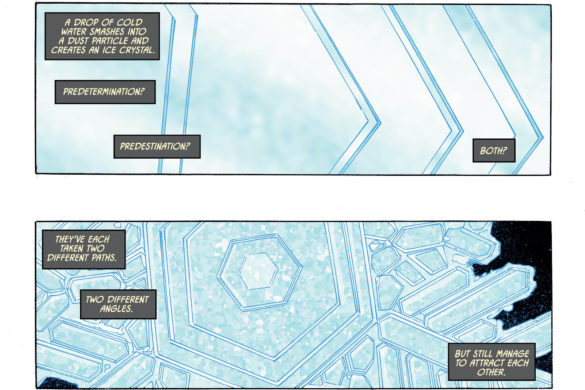 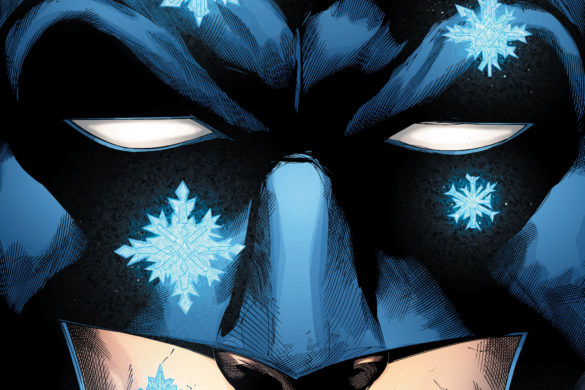 Yes, the classic villain has returned, and he’s proving to be colder than ever. After enhancing his abilities with nano-tech given to him by Apex Lex, Freeze no longer needs his armor to survive, and is on a mission to awaken his wife… even if innocent women must die. The villain’s diabolical scheme involves kidnapping Gothamites who share physical characteristics with Nora Fries, and using them as human lab rats.

Peter J. Tomasi has woven a great tale, and let his imagination run wild. Freeze has always been cold and calculating, but his latest scheme is downright diabolical. The way the villain clearly has no remorse, and cares for no-one but himself or his wife is scary. Even his own henchmen aren’t safe from his wrath. This book delivers a whole new meaning to the phrases, “Brain Freeze” and “Splitting headache.”

I’ve always been a huge Doug Mahnke fan, and I really dig his big, beefy take on Batman. His pencils always rock, but he’s been paired with no less than six inkers in this collection, and not all of them are great. Thankfully, the wonderful David Baron and Rob Leigh are as consistently excellent as always. Baron’s colors are always exceptional, and the way he tailors his hues to match, and work with the line art, is truly brilliant. I can almost feel the temperature drop whenever Freeze takes centre stage.

Rob Leigh’s letters are great too; the icicle like titles, all the sound effects and dialogue are perfect. 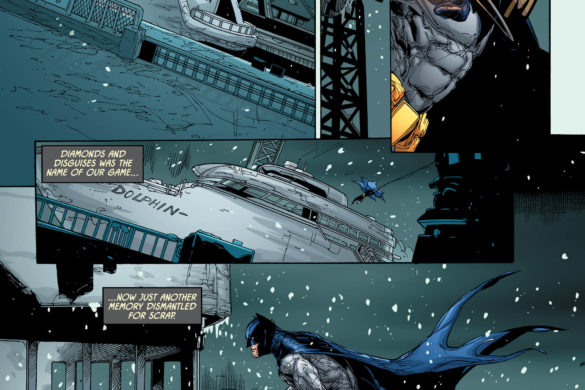 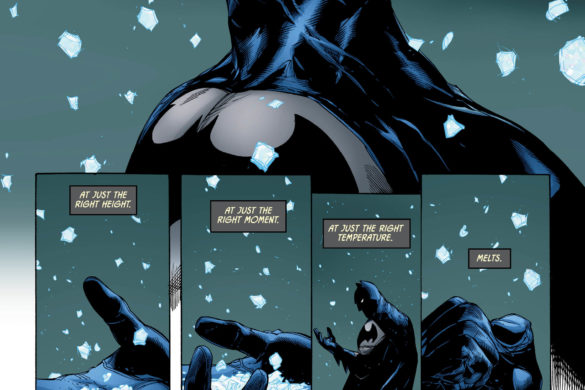 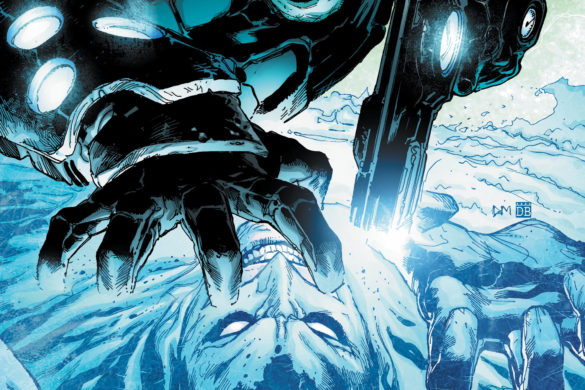 “Orphans”, written by Tom Taylor, blew me away. You must have been up a mountain in Nanda Parbat for the last five years if you haven’t heard of this writer; this Awesome Antipodean has been delivering some of the finest comics on the shelves, both for DC and their Marvel-ous competition. Batman fans will no doubt have already loved his amazing work on the Injustice titles, and devoured his award winning best-selling apocalyptic (Apokoliptic?) masterpiece, DCEased.

The great news about this story is that it’s nothing like either of those great titles. Yes, you did read that right.

“Orphans” is a standalone, poignant, and bittersweet tale. This is the kind of comics story you’d hand to someone who isn’t that much into superheroes, and who you want to show how much more a comic-book can be. This shows another side of Bruce Wayne, one that’s every bit the hero that his masked alter ego is, but without the spandex. Plus, you see him as man, a caring human being, and as a father. All this in the pages of a four color funny book. 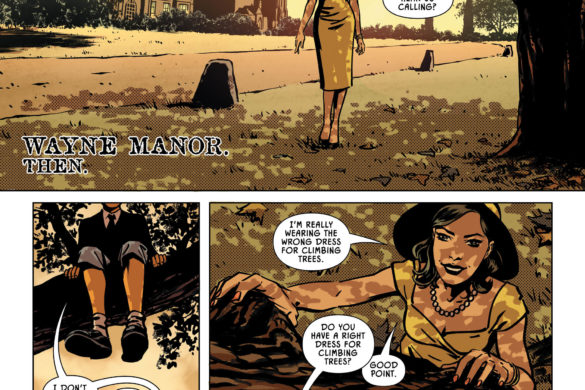 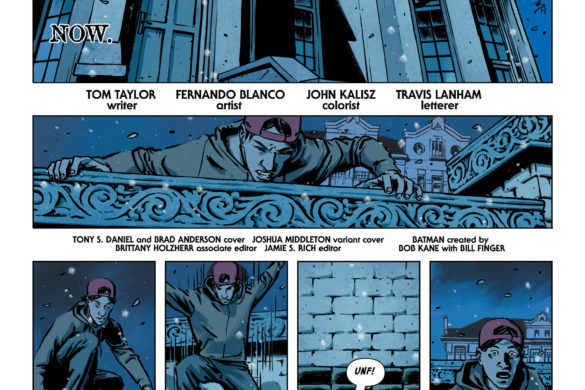 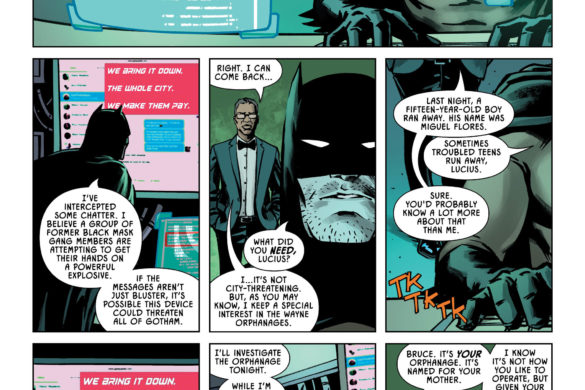 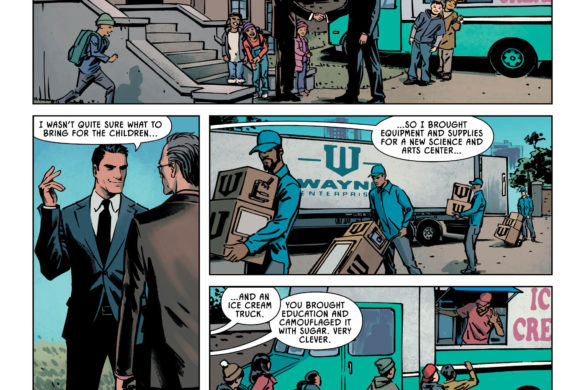 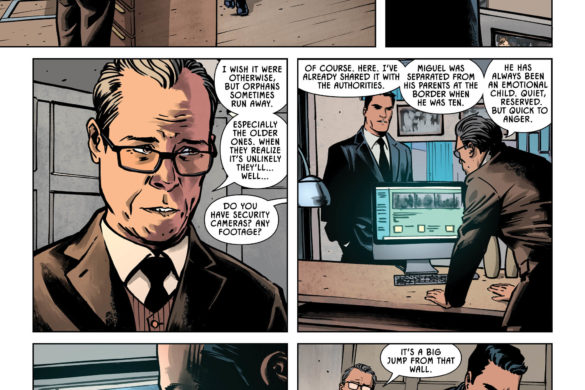 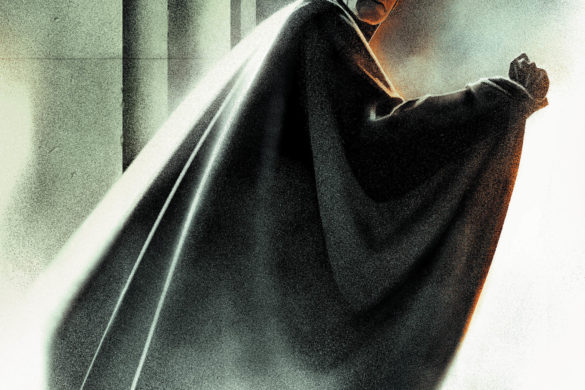 I raved about the brilliant art of Fernando Blanco when he was behind the visuals of the sorely missed Batwoman title. I’m about to do so again.

Look at this stuff! Clean, elegant, clearly drafted, easy to follow, and gorgeous. Great characterization, facial expressions, and action. Look at the first page, with young Bruce and his mother on the grounds of Wayne Manor. His mother, standing in the light, almost like an angel, with Bruce sitting on a branch in the shadows; a clear premonition and omen of his future, if ever there was one. This is simple, effective, and brilliant comic-book storytelling.

Now look at the leaves on the ground, the light filtering between them on Martha’s face, and her dress. John Kalisz, you rock, dude. Now look at the very next page, following on with the warm oranges and reds. Bruce’s childhood memories are colored by love. Then we reach page three, and the present day. All warmth is gone, and what we have is arctic blues and chilling hues. This is what a great color artist brings to a comic.

There’s also a page where Kalisz, and letterer Travis Lanham seem to be just showing off. The artificial light from Batman’s computer, the unnatural green clashing against the bright red background with white writing on the monitors. The plentiful dialogue, and the subtle TKTKTK of the Dark Knight’s fingers on the keyboard. 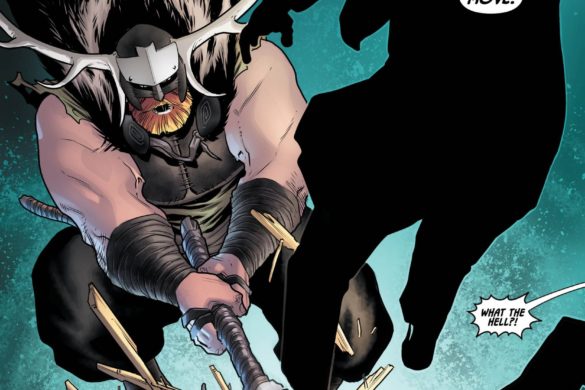 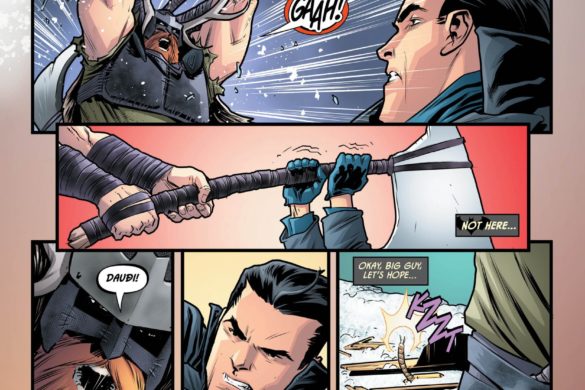 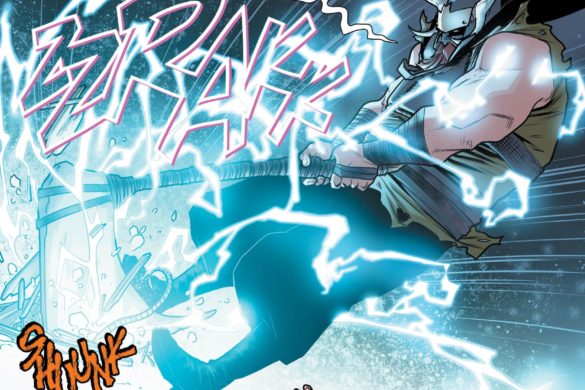 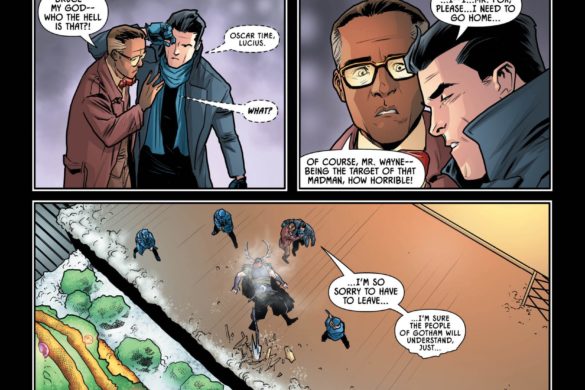 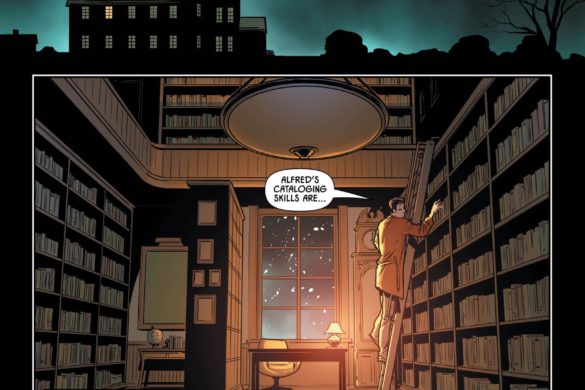 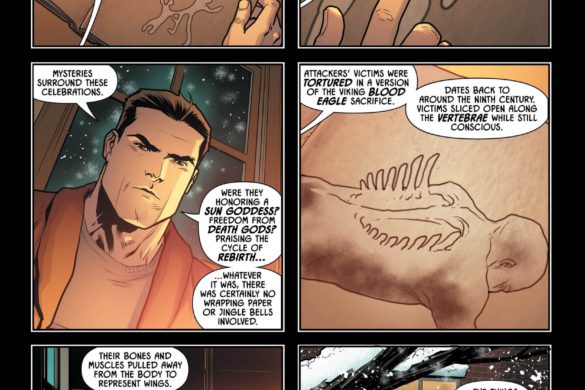 “Have Yourself A Pagan Little Christmas”, and “A Bloody New Year” round off the brilliant Detective Comics: Cold Vengeance collection, with a fantasy horror twist. This time Peter J. Tomasi is joined by artist Scott Godlewski. This story really gives us Batman the detective, a side of the character that I adore, but feel that we still see too little of. We also catch up with good ol’ grumpy Harvey Bullock, and his banter with the Bat is a thing of beauty.

Look out for a classic phone conversation between Harvey B. and Batsy, plus a wonderful exchange between the Dark Knight and an incorrigible ruffian at the start of the story. This is Batman as written by someone who really gets the character, and his motivations.

I’m a long-time fan of Scott Godlewski’s art and was overjoyed to see his take on Batman again. Mr G. is a fine talent: artist, writer, and co-creator of Image Comics’ Copperhead. He’s responsible for the pencils and inks in “Dead of Winter”, and they’re lovely; clean, crisp, brilliantly drafted, and oozing with charm and character. Scott is the kind of artist who can juggle darkness with humor, and deliver terrific action, expressive faces and detailed, yet uncluttered, backgrounds. This story was lovely to look at, and I look forward to seeing his work again.

Another reason this tale looks great is because of ‘Tec mainstays; color artist David Baron and letterer Rob Leigh. I’ve already said that I love the way Mr Baron seems to adjust his style to suit the artist he’s working with, and that he’s one of the most versatile color artists in the business. Once again, he’s adapted the hues in his pallet to match the story beats, and the line-art. Honestly, the coloring style in this story looks different to his work on the main Mr Freeze tale, and distinct – yet again – from his stellar work on The Batman Who Laughs. 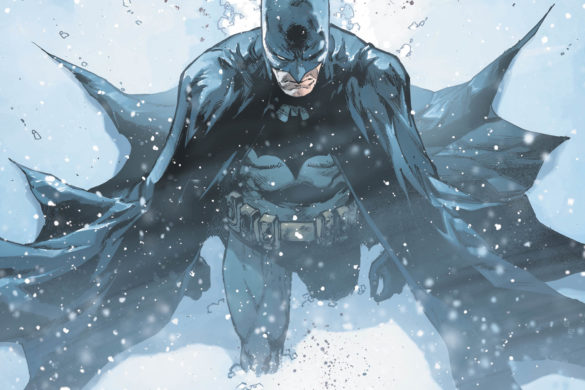 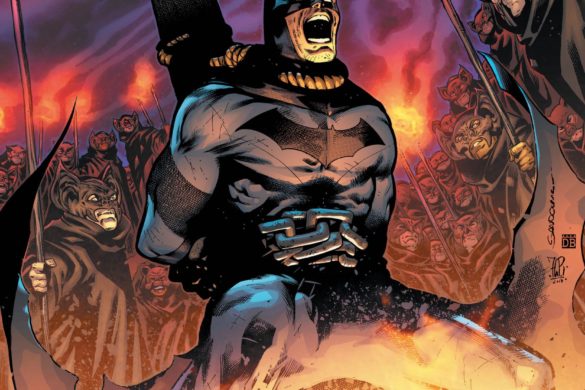 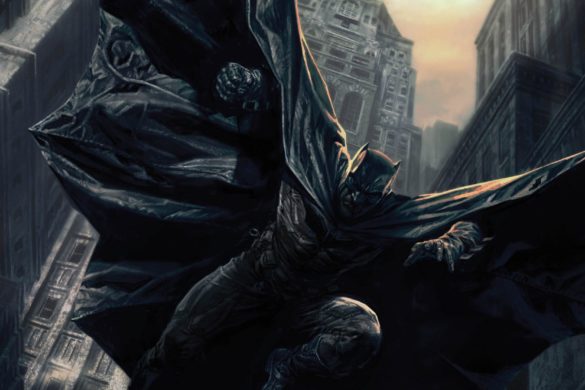 I’m a pretty hard person to surprise, but this collection really put a smile on my chubby little face. Victor Fries’ ultimate fate at the end of Detective Comics: Cold Vengeance was heartbreaking, yet supremely poetic. This has been my favorite Mr Freeze comics story in a long, long time, and the finale was both incredibly entertaining and thought provoking.

The other thing thing that this storyline has proven irrefutably that the female of the species is, indeed, deadlier than the male.

The extra stories were cool, too. “Orphans” in particular, provided a lovely, down to Earth break between the epic, five part Freeze story, and the “Dead of Winter” two-parter.

Detective Comics: Cold Vengeance also collects all the main and variant covers, plus a gorgeous set of work in progress pencils by Doug Mahnke, and the clean pencils/inks by Rafa Sandoval and Jordi Tarragona from their cover to issue #1018. All of this adds up to a book that is well worth picking up, and adding to your collection.