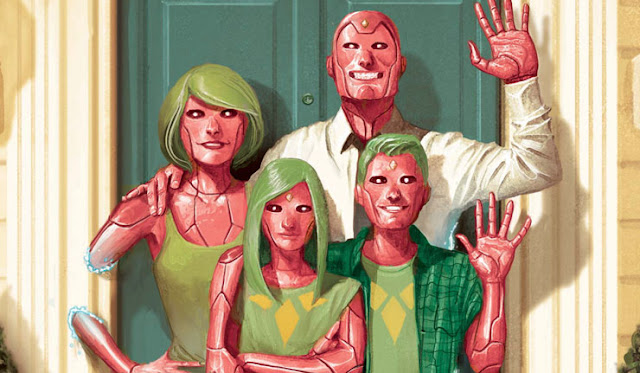 Writer Tom King and artist Gabriel Hernandez Walta created a strange premise for the old school Avenger, Vision. They gave him a family. On paper, Vision with family hijinks sounds ridiculous, and cheesy, but instead it turned out to be a haunting, character-defining master class of comics storytelling.
Let's break down 2015's Vision series.

"Visions of the Future"

As many people, I was inspired to reread Vision after watching the sublime WandaVision television show on Disney Plus. While the show broadly takes some elements from the comic source, Vision is an entirely separate beast.

The introduction scene narration immediately casts an ominous tone over the rest of the series. Neighbours Nora and George welcome the Vision family to their neighborhood. The narration is initially very droll and elaborates on mundane details like "...George is a mortgage broker. He enjoyed hot wings, but always ordered them too spicy for his own taste." 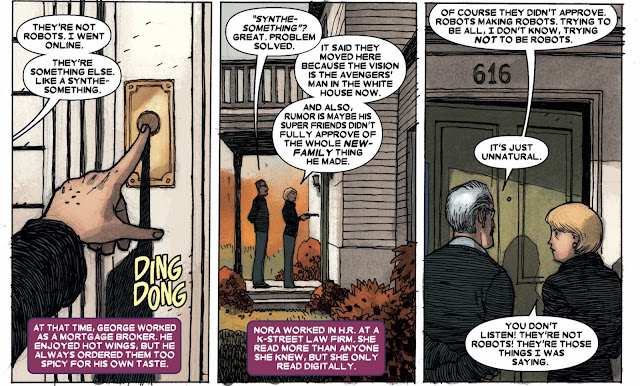 These somewhat pointless boring details lull readers into a false sense of security. It's pedestrian descriptions that implies the story seem like it is about the boring neighborhood. But then writer Tom King will interject quick, unsettling details to shock the readers' system. Like, when Vision shows the Wundagore Everbloom plant to the neighbours, his wife Virginia... "grew unusually quiet". 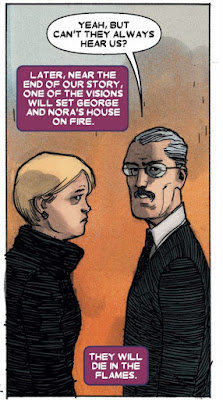 Couple that creepy narration with an image of an already disconnected Virginia standing away from the rest of the group injects the scene with an uneasy sense of foreboding. More one the sub textual meaning in a second.

The dramatic climax to the neighbours meeting the Visions scene ends when the seemingly omnipotent narrator describes in painful detail how George and Nora die.

There's a lot of things to unpack from the introduction scene with the Visions and their neighbours. First, we meet Vision's wife Virginia, daughter Viv, and son Vin.

However, the scene also introduces a lot of items that later become different metaphors that resonate throughout the rest of the series.

Vision collected a lot of unique gifts from his superhero friends. We see the Stringless Steinway piano from Wakanda, the lighter from Captain America, the Everbloom plant from Scarlet Witch, and perhaps most ominously, the beautiful but poisonous flying water vase from the Silver Surfer. 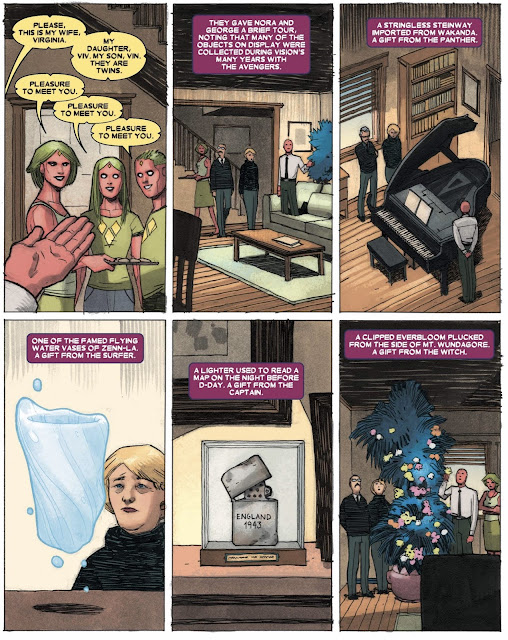 While most of the items' symbolic significance is not immediately obvious, the Everbloom is the the most overt. The Everbloom is a gift from Vision's ex-wife Scarlet Witch,  which casts an obvious wedge between Vision and his current wife Virginia. This is silent divide informs the two's relationship in the entire story.

After the neighbours leave, Vision and Virginia engage in a conversation between the fundamental differences of describing others as "nice" versus "kind". While the conversation may seem banal (most of Vision's personality quirks are), it also is the central thesis of the whole series.

Vision argues that even though describing one as "nice" allows for more flexibility in interpretation, whereas "kind" only has one sort of connotation. And if the family is to adapt to their human neighbours, they need to appear "normal" and adopt their neighbours' idioms, even if they are meaningless gestures like, say, giving a pan of cookies to robots who don't eat. 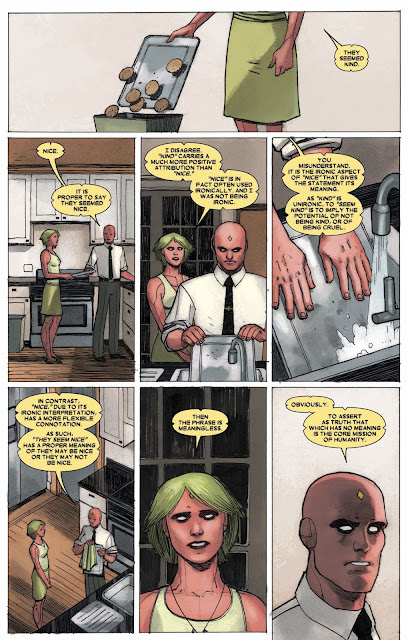 The debate of meaningless actions to appear normal is punctuated by Virginia dumping the cookies that Nora and George made for them. The Virginia understands the norms of accepting the cookies, but inherently fails to understand the actual point of the cookies is to consume them.

This brings up the secondary thesis of Vision, acting superficially normal without fully understanding the meaning behind the actions. The Visions, but especially Virginia, are more or less going through the motions of normalcy.

Virginia partially struggles with maintaining normalcy for two reasons. One, is due to where her brain patterns come from (more on that in later instalments). Two, she's easily the most isolated one of the family.

The Vision works outside the house with the Avengers. Viv and Vin go to high school and socialize with human teens. But Virginia just sits in the house most of the day rotating through her memory banks.

All the other family members have socialized themselves into society, but Virginia mostly stays in the house. Any interactions with people outside of her family end almost always end in violence.

There is a quote from issue one that perfectly encapsulates Virginia's character struggle to belong somewhere.

"Facts without context are like individuals without society. Just as an individual must find his or her place in society or else they are useless... a fact must find its place in an argument or else it serves no true purpose." 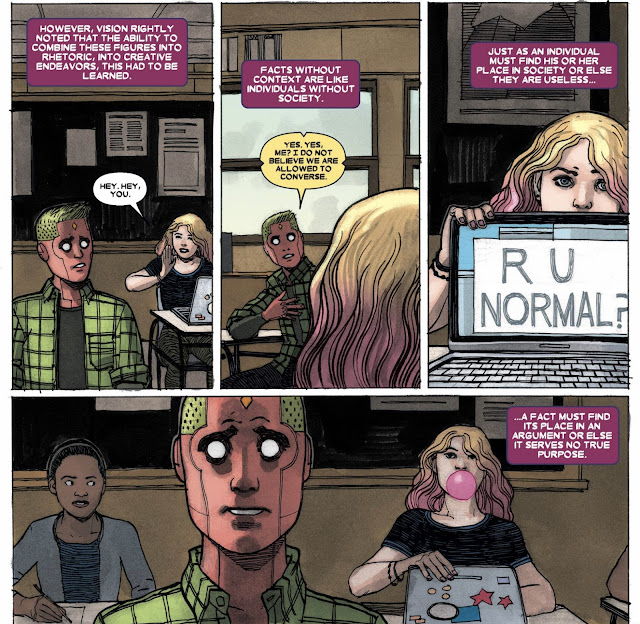 Aside from Virginia, Vin struggles with understanding normalcy. After a brief encounter with a girl at school, he openly questions to Viv, "Am I normal?" 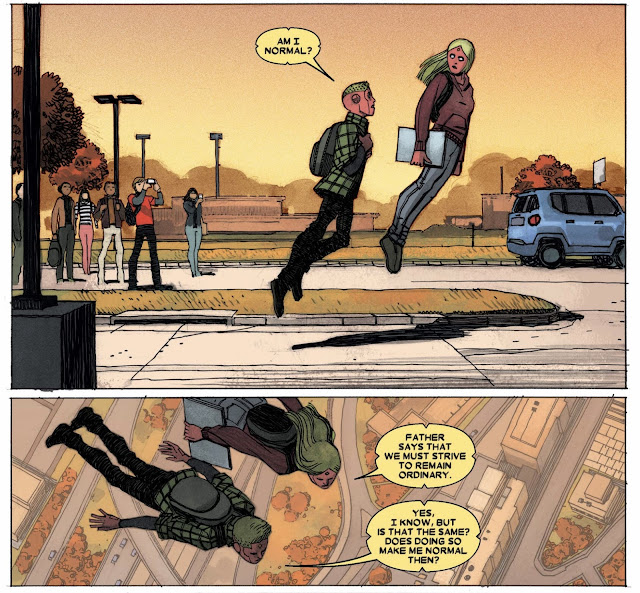 More pointedly, what is the point of even acting normal? Neither kids have a satisfactory answer other than they must keep learning.

Interestingly, Viv seems to be the most emotional one of the family. Twice in the first issue, she gets angry. More interestingly, this also makes her the more emotionally balanced of all the family members. We see later on that Vin and Virginia become more narrow-minded and focused when they're faced with problems, but Viv is more opened-minded.

Virginia is Beautiful... but Deadly

Unfortunately for Viv, her anger also put her indirectly in the path of the Grim Reaper's attack, who slices right through her abdomen.

For casual fans, the significance of the Grim Reaper is huge. When Vision was created, he was programmed with the brainwaves and personality of fellow Avenger Wonder Man to help him socialize better with humans. The Grim Reaper is Wonder Man's brother who swore revenge against the Avengers when he believed Wonder Man to be dead. However since then, Grim Reaper also has a beef against Vision who he sees as a "cheap imitation" of his brother. 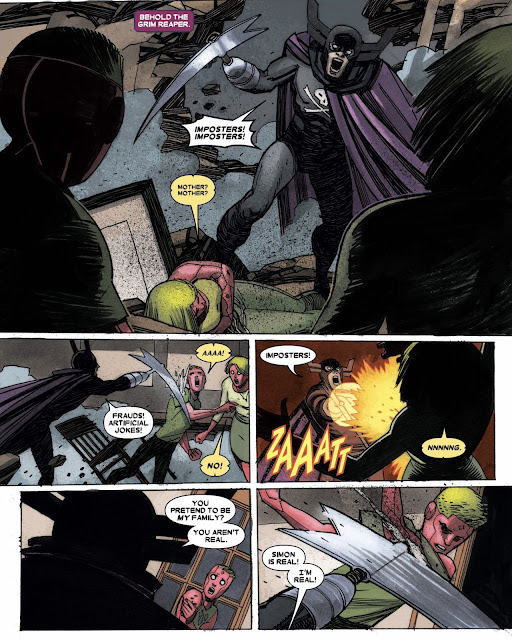 So to hear that Vision is not only still around, but thriving with a family, probably set Grim Reaper off in a rage. The Reaper slicing through Viv, caused her to malfunction.  Using the same cookie pan that the neighbours gave to the Visions earlier, Virginia deals fatal blows that kills the Grim Reaper. 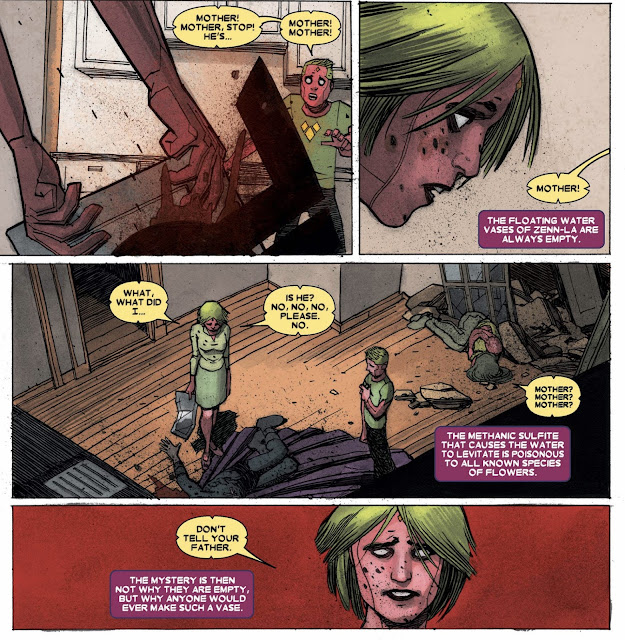 The cookie pan is a symbol of normalcy, but in the hands of Virginia, the traditional norms are warped into something deadlier, like a literal murder object. This further foreshadows Virginia's character arc throughout the series.

As Virginia delivers the Reaper's final death knell, the mysterious narrator reiterates the description of the flying water vases of Zenn-La. Despite the fact that they are a vase to presumably holding things like flowers, their poisonous water prevents any living thing to survive in it. The vase has no function other than to look attractive. 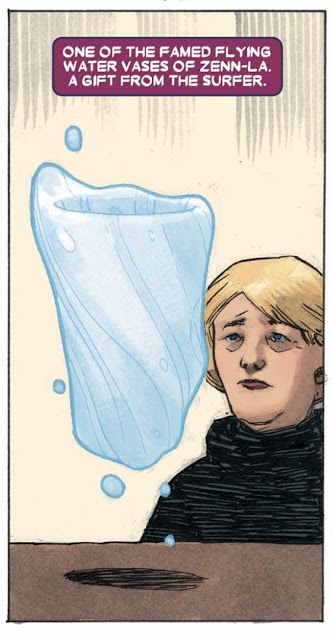 Is there a more thematically layered modern superhero series than Vision? It wisely side-steps the easy route of making it a comedy and focusing on the abject horror of creating a robot family. But what's even more striking is how the horror is played slowly and at intermittent times, like dropping the horrible fate of the Visions' neighbours.

Tom King successfully created an overcast mood of dread and creepiness in the world of Vision. And this is only the beginning. Things get much worse as the story moves along.