Some of my favorite comics are those that honor and follow the style of movies and TV shows. Comics like The Batman Adventures, for example. So, you can only Imagine my delight when a knock on my door resulted in my being handed the latest package from Penguin Random House. The box contained a copy of Marvel Action: Avengers: “Off The Clock”. This gorgeous little trade paperback collects issues #1-#3 of Marvel Action: Avengers, and is one of the most fun comics, both in terms of story and art, that I’ve read featuring these particular characters, in a long, long time.

Recently I helped promote a couple of fan films which gave us a day, and a night, in the life of a superhero trying to get some time off. By some amazing quirk of fate, this book shows six Avengers (at first… ) trying to cope with some H.R. department enforced downtime, with hilarious, and action-packed results. 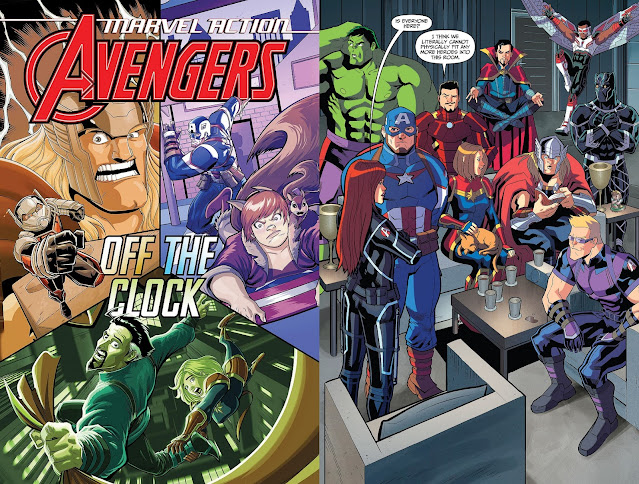 Watch as Thor and Ant-Man go antique shopping. Thrill at Captain America and Squirrel Girl attending an elementary school career day. Wonder at Captain Marvel trying to catch up on her reading in the park, before trying to resolve a domestic dispute between Doctor Strange… and his cloak.

Yes, you read all that right.

Writer, Katie Cook, must’ve had a blast scripting these stories. There are lines of dialogue that made me laugh out loud, character moments that filled me with nostalgia, and action scenes that wouldn’t be out of place on some of the biggest and best superhero TV shows or movies out there.

Thor’s reaction to finding out that the Stormwell Chronicles are novels, and the relationship between Stephen Strange and his cloak of levitation were hilarious. More than that, though, they also give great and insightful glimpse into the mind-sets of these wonderful characters. The contrast between Captain America; Marvel’s oldest hero, and Squirrel Girl; one of the youngest, was a joy to behold. 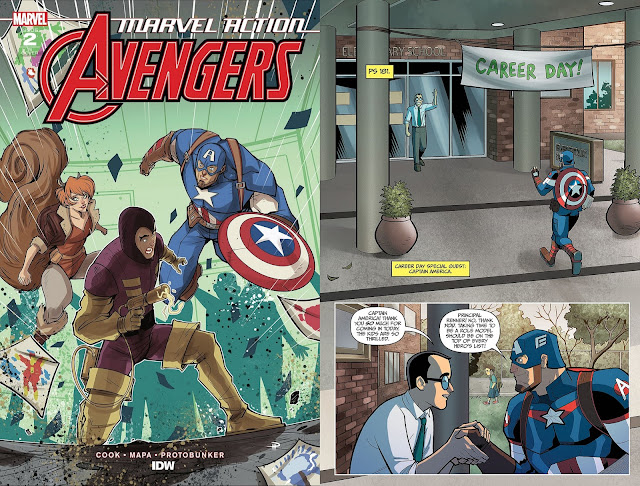 Speaking of delights, someone give Butch Mapa a raise. The art in this collection is quirky, brilliantly laid out and full of character. The way that the artist has managed to marry a cartoony style, with movie costume designs, huge set-pieces, and still honor the comics and stories the characters originally appeared in, is incredibly impressive.

Color artist, Protobunker, helps immensely. Yes, the tones and hues in the book are extremely bright, but they’re also very well thought out. The use of speed blurs, fading, natural and artificial light are all very well handled, as is the use of warmer oranges and browns for flesh tones, instead of the old-fashioned and unrealistic pinks of yesteryear.

Yes, this book is clearly aimed at younger readers, but I'm proud to admit that I loved every minute. I found many moments in these pages that would satisfy even the most ardent, aged, and cynical comics fans out there. I mean, Paste Pot Pete... come on! I’m a kid again!

Letterers, Christa Miesner and Valeria Lopez must’ve had a blast putting Katie Cooks words in the characters’ mouths. While this is a book aimed at middle grade readers, there’s a fair bit of conversation and exposition for these talented letterers to place on the page. All of it was necessary, all of it was fun, and I bet it was as much of a treat for them to work on, as it will be for readers to enjoy. 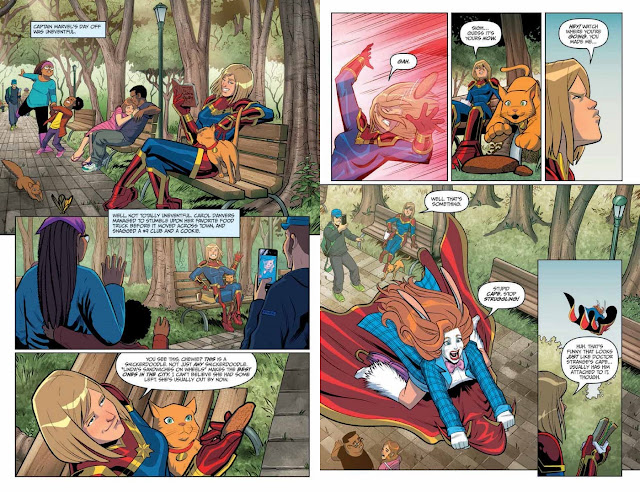 The book also includes all the original and variant covers for the issues it collects, as well as two puzzles as a bonus extra.

Marvel Action: Avengers: “Off The Clock” is a joy from cover to cover. There’s something in this book for every Marvel fan aged 9-90… at the very least. The book contains great scripts, tons of adventure, and fantastic characters. It’s out on July 20th from Penguin Random House, Amazon, and all good book-sellers, and is highly recommended, for kids, teens, parents, grandparents, and comics lovers everywhere.