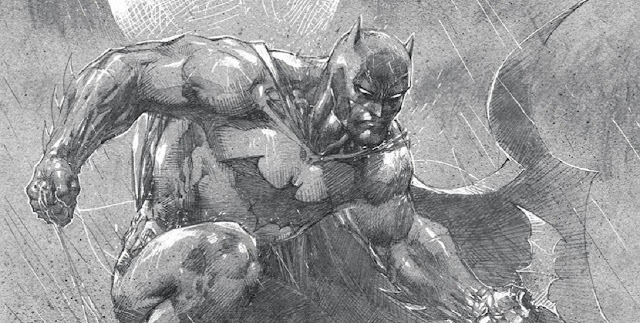 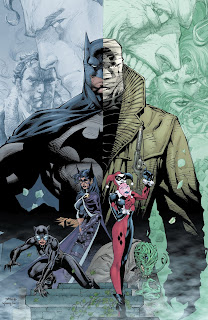 Review by Steve J. Ray
Writer: Jeph Loeb
Art: Jim Lee
Every now and then a book comes along that makes me jump for joy.
I originally read “Hush” on it’s first release back in 2002 and loved it even then; so reviewing a “new” version of the story was right up my alley. I am what’s known in the real world as a Batman Uberfan, I LOVE the character completely. I have followed the Caped Crusader’s adventures religiously for over 35 years; more than three quarters of my life in fact!
“Hush” is one of those stories that seem to divide fans: some seeing it as a big marketing ploy using a flavour of the month artist to bring new readers in; some seeing it as all style and no substance, and, obviusly, others who just love it. On first reading the story was a little disappointing, I will admit that... But the art! Oh the art!

Jeph Loeb – in my opinion – has been one of the great Batman writers of the last two decades. His work on “The Long Halloween” and “Dark Victory” following on almost seamlessly from the Frank Miller / David Mazzucchelli masterpiece “Batman – Year One” Those stories were great dark thrillers, almost pulp detective stories set at the beginning of Batman’s crime fighting career. I was expecting more of the same from “Hush” but received something totally different, unexpected and – at least on first reading – a little disappointing.
“Hush” was set today, right here and right now. Gone was the safety buffer of being a story from the past where; no matter how tough things get for our hero, you know he’s going to make it through. Gone also was the noir detective drama and shadowy madness of his previous Batman tales.
Tim Sale had illustrated both of Jeph Loeb’s previous Bat tales in a pure light and shadow style that some would call simple, but deceptively so. Jim Lee’s Batman was more noughties; detailed, loud and in your face. I see the merit in both styles and love both for different reasons. Many of my fellow Bat-fans see things as I do but - as I mentioned earlier - others saw this as plain and simple marketing and nothing more.
Jim Lee was (and still is) what’s known as a “fan-favourite” artist. His splash pages grab you, his action scenes jump out at you, his covers entice you; his heroes are heroic and iconic, his villains shocking and evil, his heroines beautiful and enigmatic... But he can’t draw a dog properly. Some people object to this, and I can see their point to an extent. An artist should be able draw ANYTHING properly, not just muscles and mayhem. Usually I would agree; especially when paired with the writing of someone like Jeph Loeb, but there’s the rub. “Hush” is NOT “The Long Halloween” or “Dark Victory” it’s not even trying to be. It is a muscles and mayhem story, so it needs a muscles and mayhem artist. 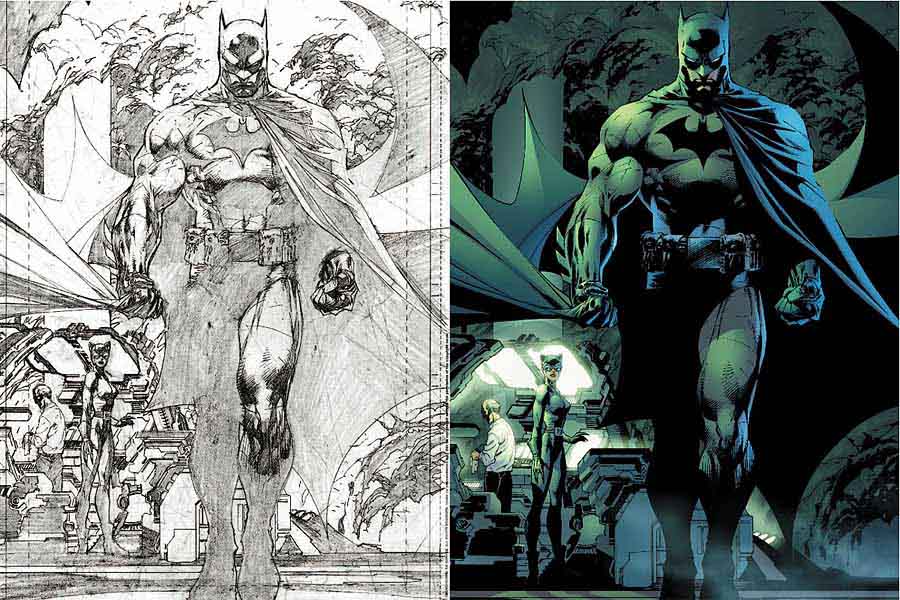 “Hush” tells the story of a Batman being attacked from all sides by a multitude of villains and introduces elements from his past that were, up to this point, undisclosed. It brings back old villains in a new way and introduces a brand new menace in the eponymous Hush of the title.
The main, enduring legacy of the story, is that it paves the way for the return of a figure from Batman’s past that no-one thought they’d ever see again, particularly Batman himself. So while “Hush” is not a masterpiece of literary genius it is a big, rambunctious powerhouse of a tale lavishly illustrated by a great storyteller and draughtsman.
The original twelve issues were a smash hit, sold out everywhere have been reprinted, collected, re-collected and gone down in comics history... Which leads us to “Hush Unwrapped”.
This book is a gem and will take pride of place on my Batman shelf, it’s THAT good. Why? I hear you ask? Because it’s done something I have wanted to see for years. Yes it’s a collection of stuff I’ve already read, yes I own the original 12 issues and yes I have the collected book version too; so why did I jump out of my chair and almost beg to review this book? Because it’s a first.
Let me elaborate.
This book contains the complete 12 part “Hush” story as written by Mr. Loeb but the art is just Jim Lee’s pencils, it has not been finished / inked or coloured. It is presented as a work in progress, and it’s a real eye-opener too! The pencil art of Jim Lee is a sight to behold... I found myself drawn into the detail like never before; examining every line, drawn into every corner of the page. I love seeing the artist’s and writer’s notes explaining to the inker and colourist how they’d like the pages finished and the little crosses on large blank areas explaining that those areas should be all black, please Mr. Inker man sir. 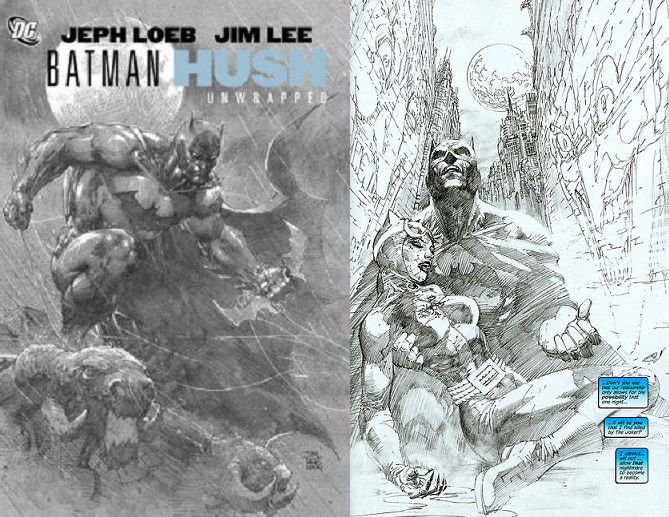 As a look into the creative process behind making a comic this book is a must have item. The sheer work that the artist has put in - and all the work that still has to follow - is inspiring and more than a little humbling. One of the things I did was compare the book page by page with the completed version – call me a saddo geek and I will just say thank you, proud of it. The differences verge from the surprising to the confusing. A small example, that will hopefully not spoil your reading pleasure, is the bandages on Bruce Wayne’s head; wrapping just around his forehead in the original pencils, but the whole of the top of his skull in the finished version.
I only have one criticism of this version of “Hush” and it is that I wouldn’t recommend it to those who haven’t already read it. The nuances and artistic processes that were hitherto mysteries are what make this book great. I’ve said how I would be lost in the detail and spend ages just looking at the art and “stage directions” but, however fascinating and illuminating these things are, they are hardly conducive to reading and absorbing a story.
My advice is to pick up the finished version of “Hush” first - to read and enjoy the action. Then get “Hush Unwrapped” for a wonderful education into how the masterpiece was made. It’s like having your favourite book with DVD / Bluray special features... LOVELY! More please DC Comics: If you could please give us “Watchmen Unwrapped” and then do the same with the aforementioned “The Long Halloween” I’ll save up the pennies.
I love comics / graphic novels and I love Batman. This book has enhanced that love and appreciation of both in a way I didn’t expect. This is the kind of book I would LOVE to show those that still don’t recognise comics as the art form they really are. I love picking up collected volumes that re-print the original scripts, but this is the first book – to my knowledge – that prints ALL of the unfinished art.
In short; while the book doesn’t quite succeed as a good read, it is still a fabulous art-book, as well as one of the best examples into the world behind the scenes of how a comic is made.