MODESTY BLAISE IS BACK! 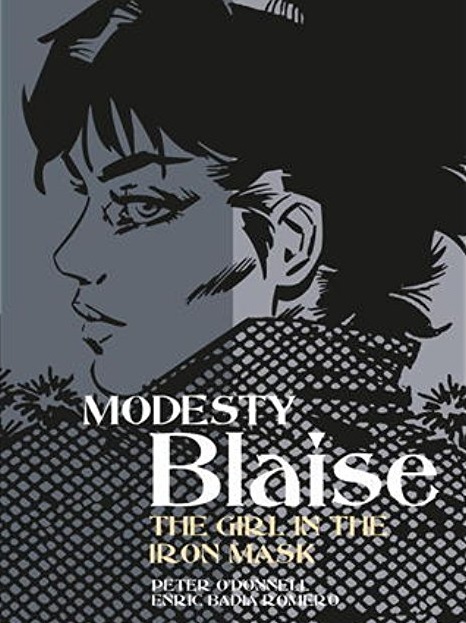 Modesty Blaise – The Girl In The Iron Mask

Written by Peter O'Donnell
Illustrated by Enric Badia Romero
Published by Titan Books
Review by Steve J. Ray
I love Titan Books. Any company that goes to the trouble of restoring rare British comics, and collecting them in lovely collections such as this one deserves to be loved. They could easily just collect the well known British and American comics that the fan boys lap up, but they also preserve and restore classic newspaper strips which, due to their very nature, are almost impossible to find and keep in good condition in their original form.
This particular collection is one of 95 books collecting the Modesty Blaise adventures originally published in The Evening Standard newspaper between May 1963 to April 2001. What's astounding is in that almost 40 year run the strip had five artists and just one writer.
Peter O'Donnell is widely regarded as one of the finest and most influential British strip writers ever. His work on Modesty Blaise alone is testament to that. He sadly passed away in 2010.
Enric Badia Romero is the artist most closely associated with the strip, having drawn it more than any other artist; starting in January 1970 all the way to October 1978 and then again from September 1986 up until the end of the series in April 2001.
This book is lovely. When my editor gave it to me I actually argued blind that this was a new graphic novel, as the work within had been restored to such a level of crispness, and quality that I could not believe it was originally printed almost 25 years ago.
The Girl In The Iron Mask collects three complete Modesty Blaise adventures:
Fiona – Originally published between May and October 1990
Walkabout – between October 1990 and March 1991
The Girl In The Iron Mask – between March and August 1991

I must admit that the thing that first grabbed me with these stories was the art. It immediately took me back to my childhood and bringing the newspaper home for my parents. I was always into comics and comic strips, and these drawings really transported me back to those times. The main character's huge dark eyes and the clear, crisp draughtsmanship of the layouts is as lovely to look at now as it was on first publication.
Reading the stories in collected form was actually a little disconcerting at first. I don't think Peter O'Donnell ever dreamed that his daily strips would ever be collected in book form, let alone so lovingly restored and beautifully presented. These stories were designed to be read in bite-sized chunks on a daily basis, not necessarily devoured in large sittings.
Titan Books could easily have removed the daily headers and edited the stories to read as one continuous narrative. At first I wish they had, though as I got used to the layout and the titles being there and I remembered that this was a far more respectful way of collecting the strips together I was a lot happier. Once accustomed, they became easier to digest.
The writing is, by today's standards, a little melodramatic and the dialogue quite cheesy. PLEASE Peter O'Donnell fans, don't be mad at me for saying that because it is also a product of it's time and was written as entertainment and not as literature. I promise to redeem myself in your eyes before this review is over. The stories are, at the same time, full of charm, they're beautifully imagined and entirely worthy of being reintroduced to a new generation who should see the strips that inspired so many of today's writers and artists.

The main strength of these stories and something that has really impressed me is the actual characters and their relationships. Modesty herself has always been described as a femme fatale or as James Bond in heels. I find both these descriptions almost insulting and derogatory. She is both and at the same time none of those things and so much more besides. This is a woman as tough as any action hero I have ever read but with an intelligence, compassion and empathy towards others that I can only describe as inspiring.
In these three stories alone she exhibits a love and respect for nature, wildlife, ancient cultures and traditions and the plight of the sick and the starving. In Fiona the character named in the title is the pet chimpanzee of one of the other protagonists. The relationships with the animal and her owner and with our heroine are both real and moving.
In Walkabout, Modesty works with a tribe of Native Australians. Her obvious love for their culture, heritage and way of life is incredible. I don't think we would ever see James bond behave in this way.
In the main story The Girl In The Iron Mask we see a strength, intelligence and determination in Modesty that could seriously give any Dark Knight or Man Of Steel a run for their money.
Another of the things that I loved about this collection is that, while clearly fiction, the stories could happen in “Real life” and contain situations and scenarios that are still relevant and important today. The plight of starving children in Asia and Africa is as real as it ever was and to see a “Femme Fatale” giving of her own personal fortune and – more impressively and importantly – of her own time, blood sweat and tears is truly brilliant. She also works and lives with the aforementioned Native Australians and helps / funds a free clinic in the third world... all while kicking butt, fighting the Mafia, taking out assassins, stopping corrupt government officials and saving the innocent.
Shake your Martini with that, Mr. Bond.
I came into the world of Modesty Blaise as a novice only remembering the beautiful artwork and the childhood reminiscences it evoked. By the end of this book I realised that Peter O'Donnell and his collaborators had created one of the most complete, fully realised, well-conceived and beautifully presented fictional characters in British publishing history.
I didn't need to know the whole story behind the decade’s long friendship between Modesty and William Garvin. In these the adventures alone I saw a love, friendship and mutual respect between the two that speaks volumes. He may speak like Dick Van Dyke in Mary Poppins but this is a hard man with a heart of gold. I don't know if Willie Garvin ever had his own strip, though if any character is worthy of his own spin-off, it's that guy. 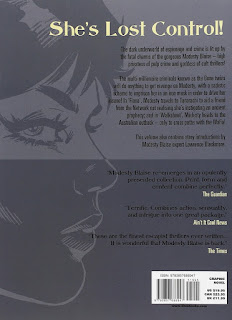 In all these stories are absolutely charming. They're thought provoking, action packed and contain real people, tense situations and some of the nastiest villains you could ever imagine. In terms of pure cruelty, selfishness and downright evil, the Bone twins' revenge scheme against Modesty make Doctor Doom look like Mickey Mouse.
Bravo Titan for collecting these treasures. This book and the rest of the Modesty Blaise collection are a definite must have to all aficionados of newspaper strips in general. I think it's also important as a learning tool to show writers how one can use the restrictions of this format to its fullest advantage. Most of all these books can reintroduce characters that deserve to be showcased and preserved for an all new generation of readers.
I count myself lucky to be one of them.