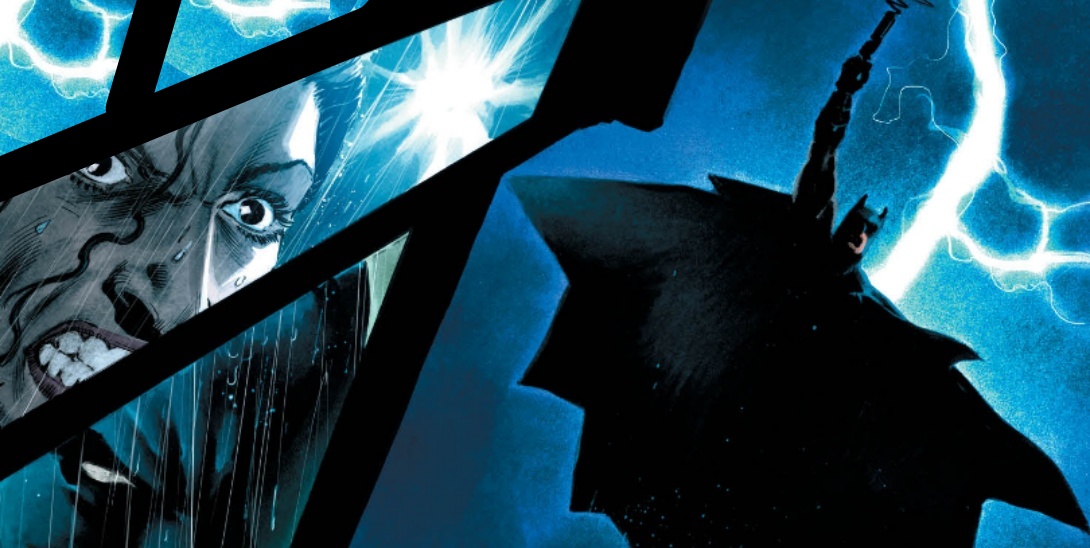 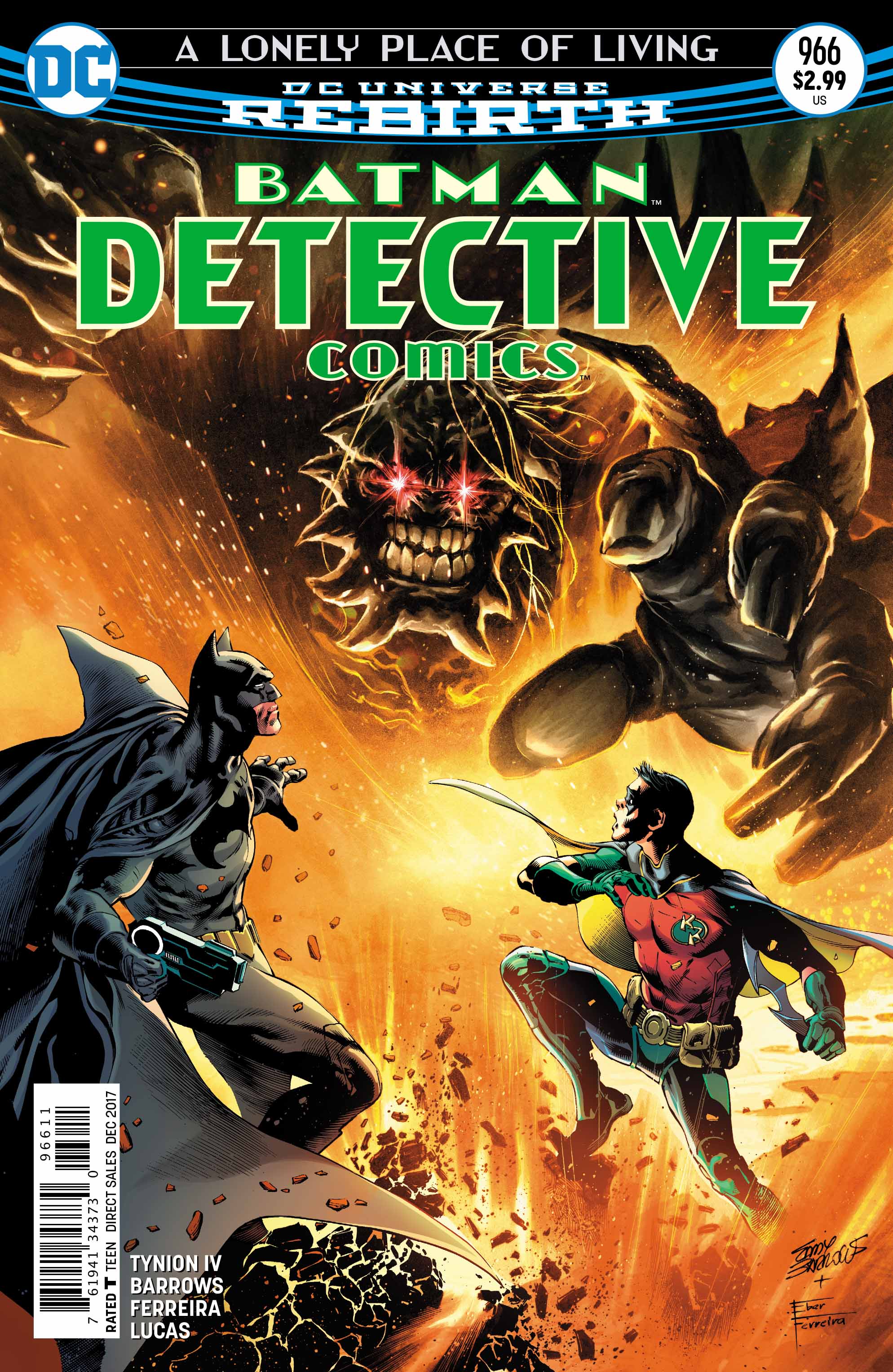 Writer: James Tynion IV
Artists: Eddy Barrows, Eber Ferreira, Adriano Lucas and Sal Cipriano
Review by Steve J. Ray
Red Robin Lives! In Detective Comics #966 we move from re-living Tim Drakes past, and take a look into one of his possible futures. Part two of “A Lonely Place Of Living” is a freight train of a story, and I’m loving the ride!
At the end of the previous issue, we left Tim Drake just after escaping incarceration by Mr. Oz. The cliffhanger ending saw him and Batman on the run from Doomsday. As if this wasn’t enough, the Batman he was fighting alongside wasn’t Bruce Wayne, but an adult version of himself!
It’s fairly common knowledge amongst die-hard Batman fans, that for many years Bruce has seen Tim as his eventual successor. I’ve often said that Red Robin is arguably the most capable and well rounded crime-fighter out of all of Batman’s protegees. Dick Grayson is his own man, Jason Todd has always been a hot-head, and Damian too much of a wild card.
Some fans saw, and still see, Tim as too straight laced and as a bit of a goody two shoes. While I agree with this to some extent, isn’t that what a hero is supposed to be? 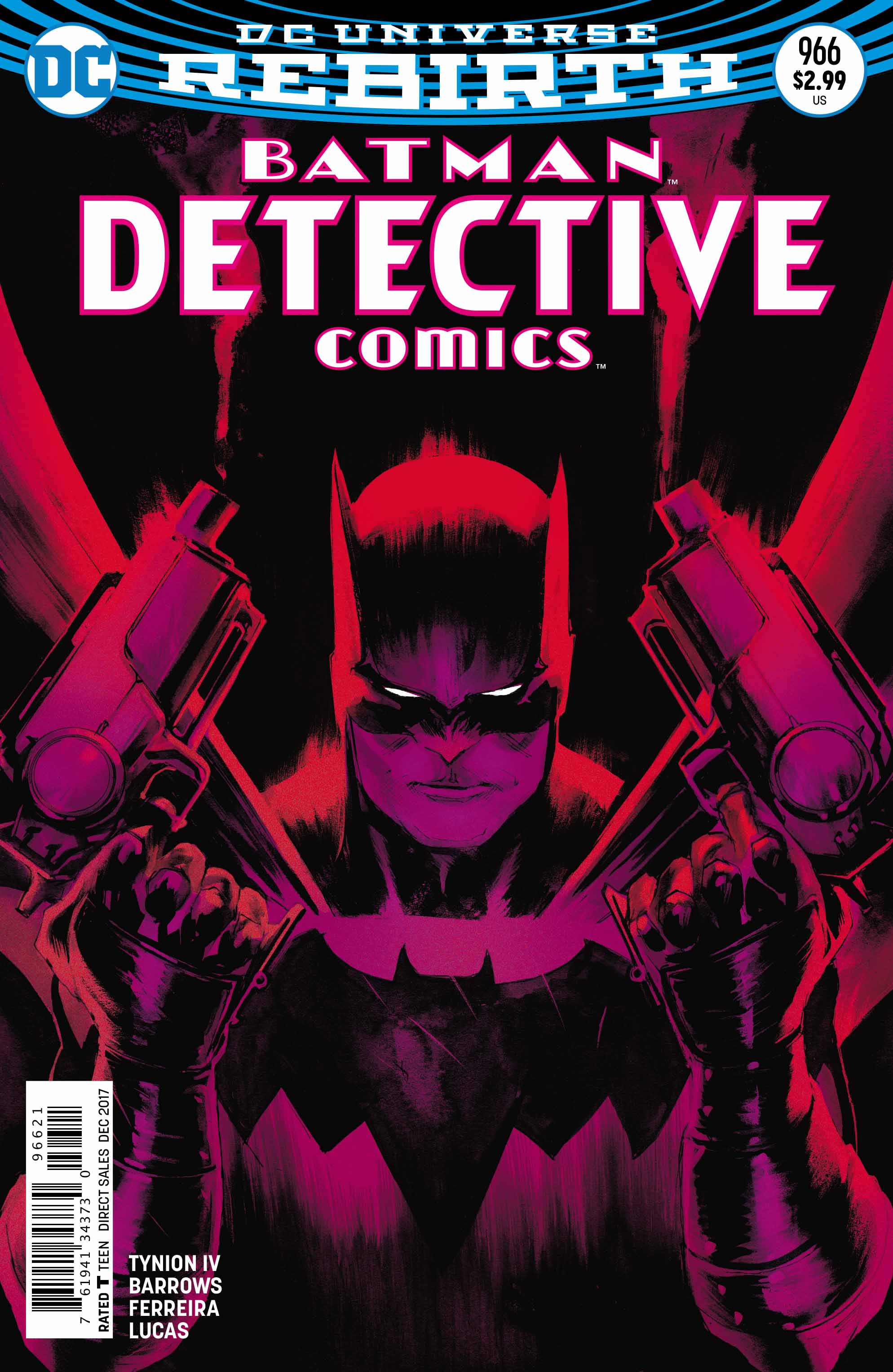 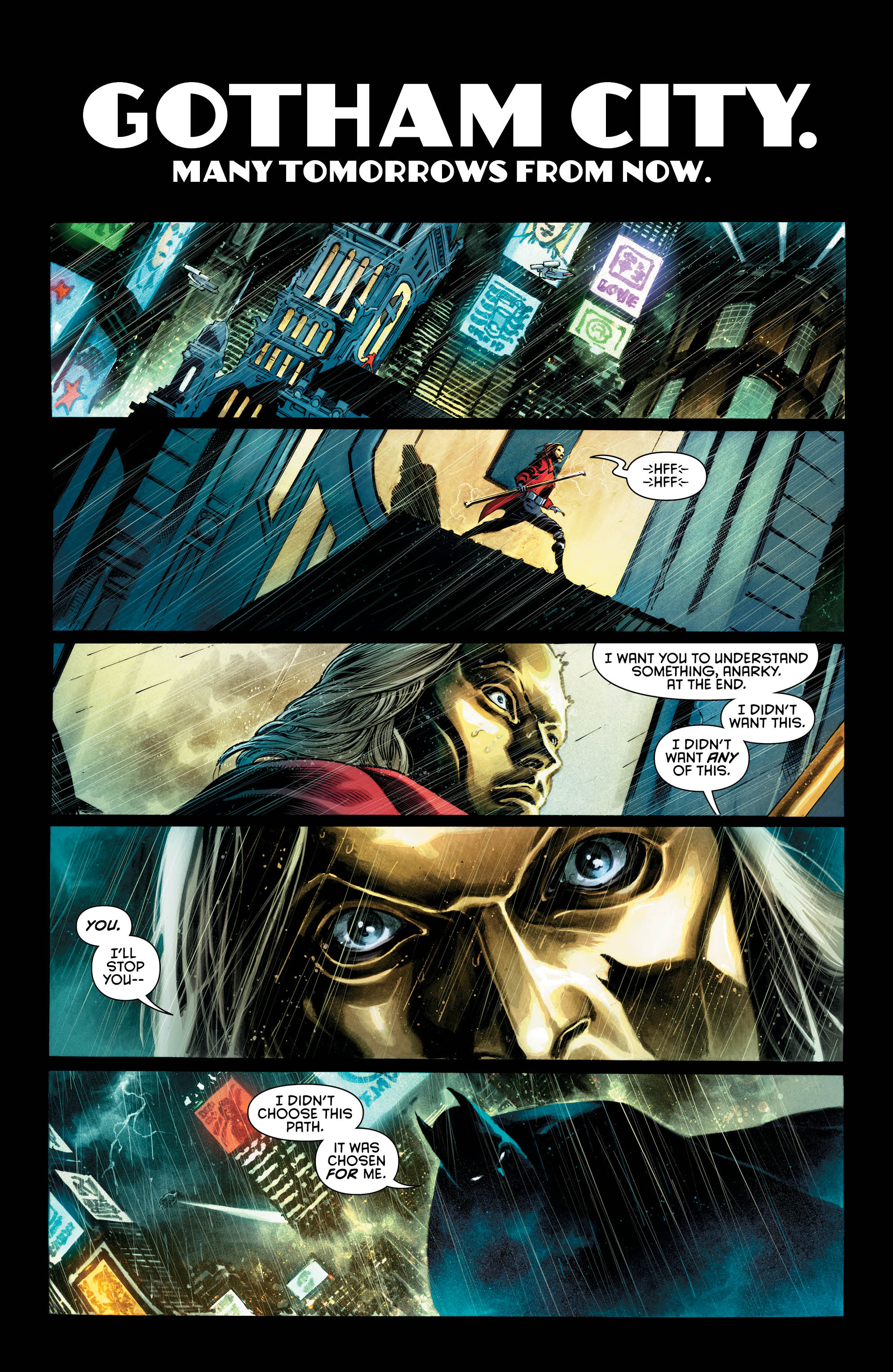 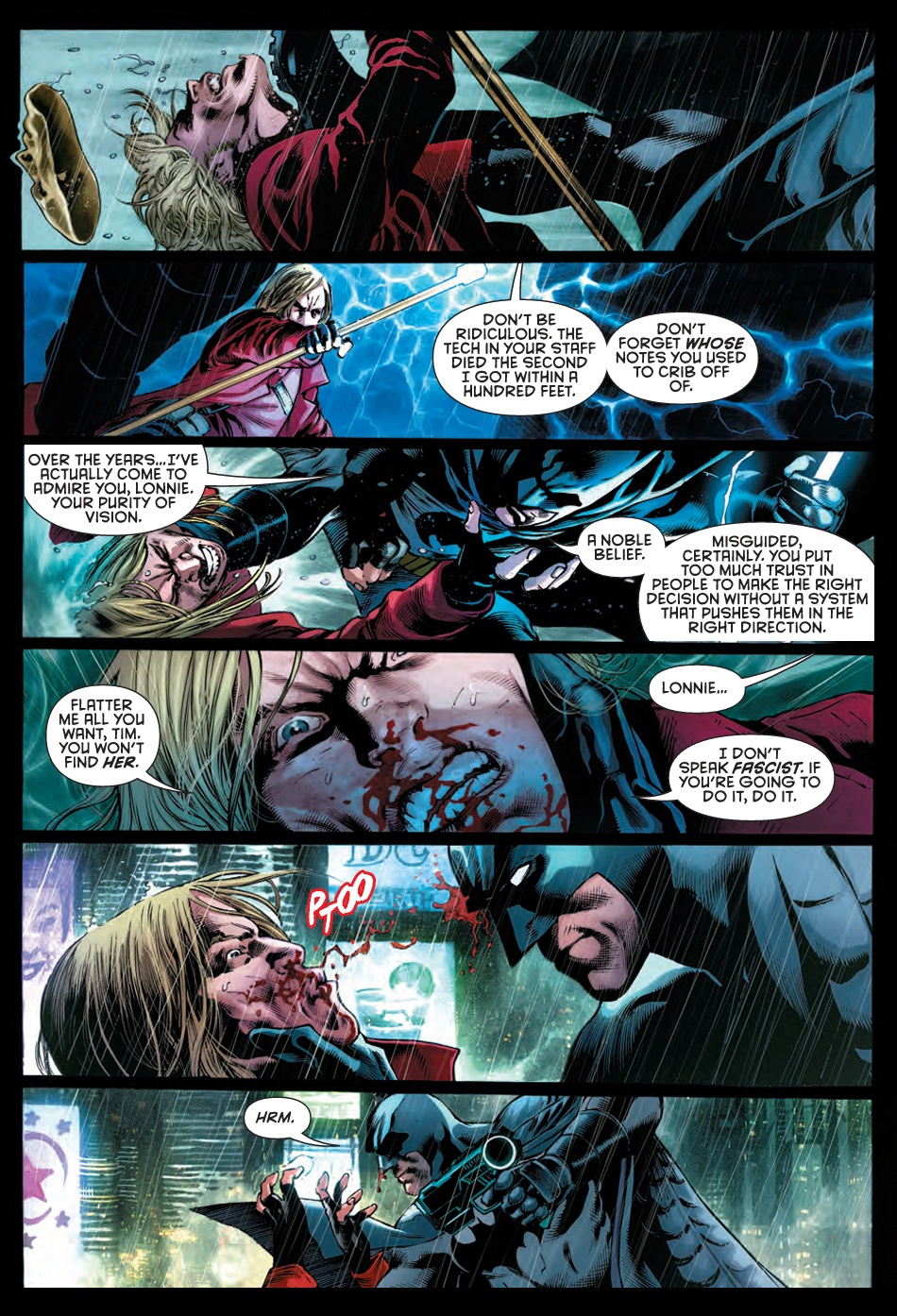 With Detective Comics #966 James Tynion IV has really turned my opinion of Tim Drake on its head. The opening pages depicting a Gotham City many decades from now really put the dark into Dark Knight. We see a Batman that is far more akin to Azrael, when he took over the mantle (Batman: Knightfall), or when Jason Todd tried to assume the role. (Batman: Battle For The Cowl).
This Tim Drake is tortured, broken and dangerous.
Since Mr. Tynion took over the writing duties on this book, a recurring theme has always been Batman’s humanity. What does it take to be Batman? What are his strengths, and – more importantly – what are his weaknesses? Tynion’s Batman is human, and real. so too are his supporting cast, every single one of them. That’s why I love this book so much. 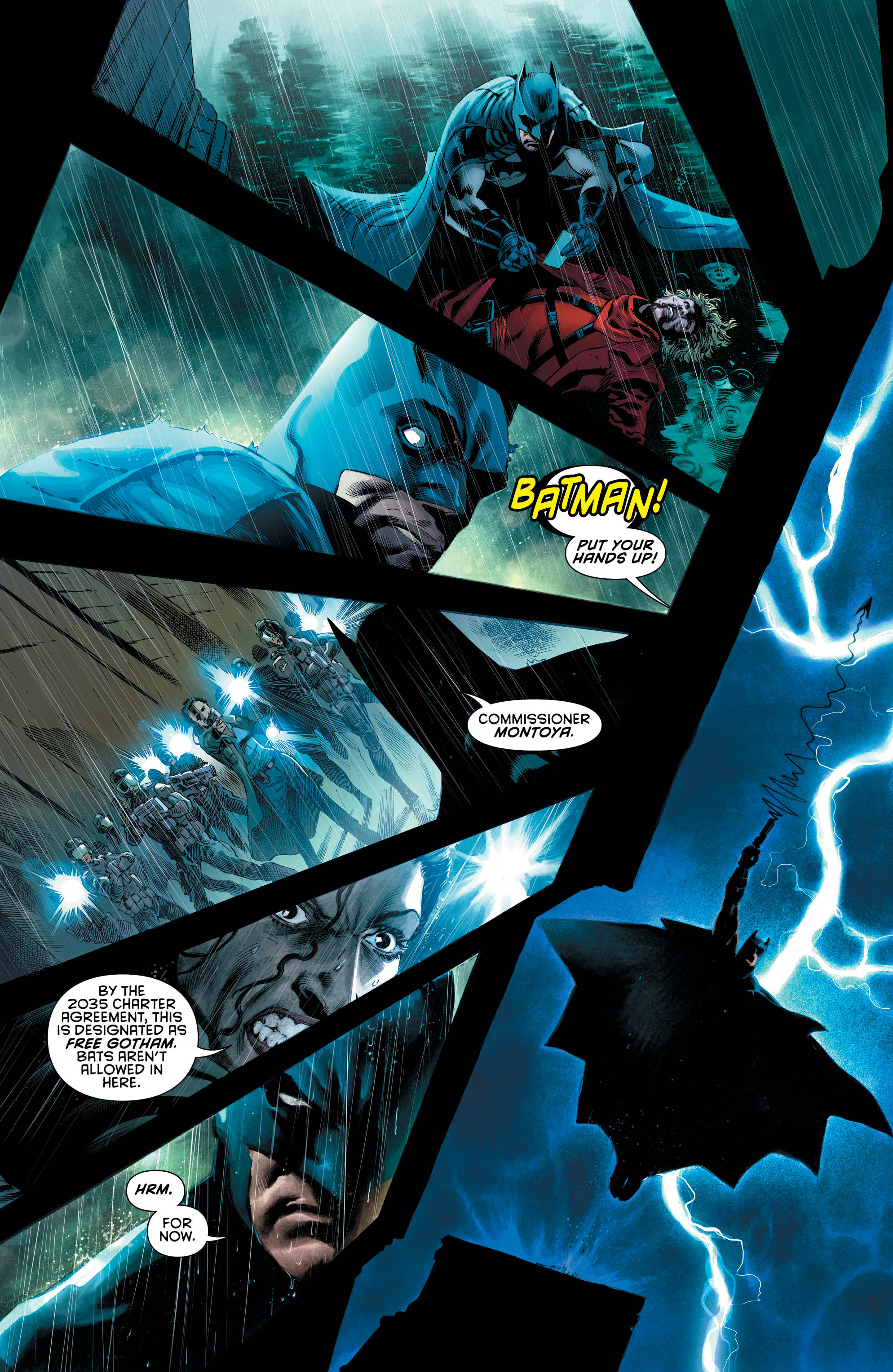 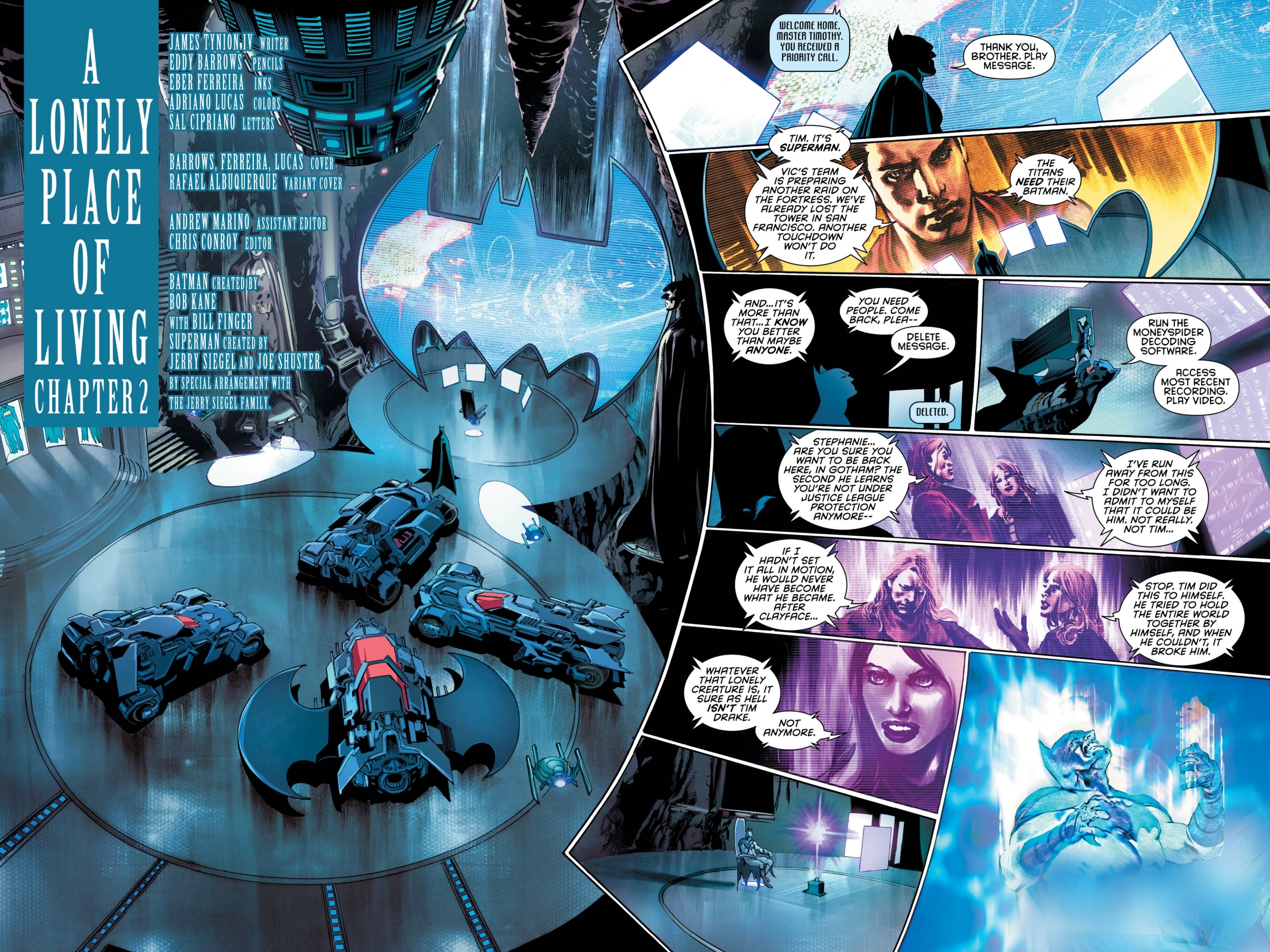 Eddy Barrows is a frickin’ superstar! The art on this issue is absolutely fantastic. Detective Comics simply has the most incredible rotating team of artists of any book on the shelves. I started reviewing this book after Eddy’s initial run, but have bought every back issue since. Marcio Takara, Christian Duce, the terrific Carmen Carnero, and Doctor Dabuten himself; Álvaro Martínez, have provided over twenty pages of joy, every two weeks for over a year now. Mr. Barrows gives us a vintage Batman, a futuristic space station, a dystopian Gotham City, action and emotion. Simply gorgeous.
Eber Ferreira is the artist most associated with inking Eddy’s work, and it’s clear to see why. The textures and depth of his brushwork, over the already beautiful pencils, are like chocolate sauce over yummy ice-cream. Barrows and Ferreira are a TEAM… plain and simple.
Let us not forget the often unsung heroes of comics; the colorist and letterer. Adriano Lucas’ lighting strikes, police floodlights and polish on Anarky’s mask, all add realism and grit to the already sublime artwork. Sal Cipriano’s retro credits (a la Lonely Place of Dying) his futuristic captioning, and smooth-as-silk speech bubbles make the reading process an easy one.

Detective Comics #966 continues to deliver the same high quality that we have come to expect. Writing that excites, and pulls at the emotions. Art that pleases the eyes and tugs at the heartstrings (Page 21 is KILLER!) I need to invest in a new thesaurus, because I’m quickly exhausting my supply of superlatives. This issue has earned another well deserved: