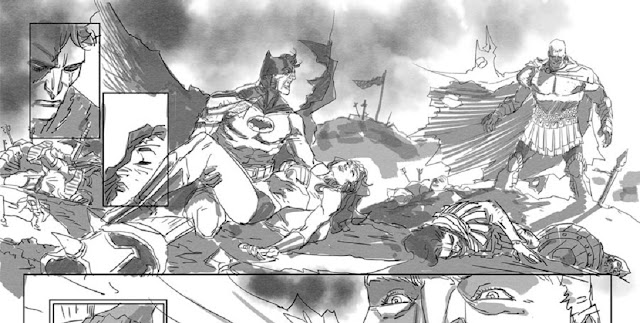 DC All Access is back with a full slate of Batman related content. DCAA spoke to the executive producer and cast of Gotham about Professor Pyg’s emergence on the show. There are also discussions about some of the latest amazing new comics, including Batman: The Merciless and the Dark Nights: Metal – The Flash crossover. Finally, there’s an in-depth look into Gotham By Gaslight, the much anticipated animated adaptation of the legendary Elseworlds graphic novel.

The professor is in! The latest episode of Gotham finds Jim Gordon and the GCPD facing one of Batman’s most fearsome foes, Professor Pyg. DC All Access talks to Ben McKenzie, Robin Lord Taylor, Sean Pertwee, Jessica Lucas, Camren Bicondova, Cory Michael Smith, Morena Baccarin and Executive Producer Danny Cannon about what Pyg’s emergence means for the show and where we can expect things to go from here in Season 4.

Batman: The Merciless – Bruce Wayne Is The New God of War

The focus is on the comic stands in this video, starting with the newest Metal one-shot, Batman: The Merciless. Plus, we talk to a dream team of WildStorm artists about this week’s beautiful WildStorm: A Celebration of 25 Years collection, dive into DC House of Horror and Hanna-Barbera’s Ruff and Ready #1, and give you a chance to win an amazing Batman: The Animated Series action figure collection. You’re going to want this one!

The Scarlet Speedster is in a must-win race against death…the Red Death, that is! The Flash #33 kicks off “Bats Out of Hell,” a full-throttle, multi-issue Metal tie-in that features Batman and the Justice League. DC All Access talks to artist Howard Porter about what new nightmares await us in this debut issue and why Metal reminds him of reading comics as a child.

Light the wick and draw the shutters, there’s a killer on the loose in Gotham City! DC All Access dives deep into Gotham by Gaslight, the much anticipated animated adaptation of the legendary Elseworlds graphic novel. Executive Producer Bruce Timm,  Screenwriter Jim Krieg and Director Sam Liu drop by the DC booth at NYCC to chat with Tiffany about bringing Batman to the Victorian Age, the challenges and thrills that come with completely redesigning the world of the Dark Knight and whether we may be seeing other movies set in the Gotham by Gaslight world.

From hogs, to warlords, to the foggy streets of yesteryear, the latest DC All Access is totally Batalicious. Don’t believe me… just watch!
This has been Steve J. Ray, your man on the street, signing off.
(This article first appeared on the Dark Knight News Website on October 27th 2017)